At least 15 states and one union territory have confirmed that people between the ages of 18 and 44 will have to wait before they can take the shot. 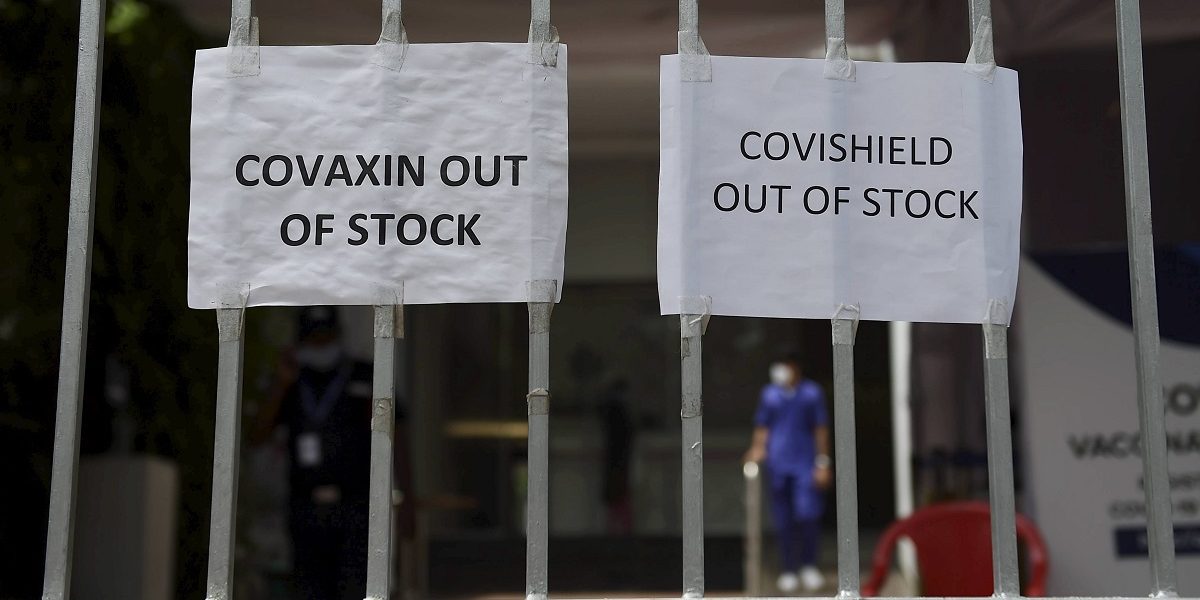 Posters at a COVID-10 vaccination centre declare it has no available stock in Mumbai, April 30, 2021. Photo: PTI/Kunal Patil

New Delhi: A day before the scheduled expansion of India’s COVID-19 vaccine programme, 15 state governments and one union territory have now made it explicitly clear that they do not have the stocks to inoculate adults below the age of 45 at the moment.

As The Wire Science had reported on April 28, some states had revealed that people between the ages 18 and 44 would have to wait until the third week of May to get shots of vaccine candidates. These states had said that though they had placed orders with local manufactures Serum Institute of India (SII) and Bharat Biotech, the companies had informed them that there would be a delay in delivering the doses.

Health ministers and chief ministers of various state governments have now made it clear that the expansion will not be flagged off on May 1. While some, like Delhi’s chief minister Arvind Kejriwal, said that they expect to begin inoculating all adults from May 3, his Andhra Pradesh counterpart Y.S. Jagan Mohan Reddy hinted that the expansion will only happen in September.

Authorities in these states have also asked people not to queue up near vaccination centres until the government announces the expansion officials.

Though there is an evident supply-side shortage, several crore people have already got registered on the Co-WIN portal already. The Centre revealed late on Thursday that more than 2.45 crore registrations were recorded on the digital platform ahead of the expansion.

The ministry also said that the cumulative number of COVID-19 doses administered in the country has crossed 15.22 crore since the drive was kicked off on January 16. This represents just 9% of India’s 1.4 billion population.

The shortage in oxygen comes at a time when cases in the country have risen at an exponential rate. India has added about 7.7 million cases since the end of February, according to a Reuters tally. In contrast, it took India nearly six months to add the previous 7.7 million cases.

The Wire Science is collating a list of state governments that have confirmed their inability to begin the expansion on May 1.

Additionally, reports suggest that Kerala and West Bengal – among others – will also not begin the expansion on May 1, but there has not been official confirmation yet.

Chief minister Arvind Kejriwal on Friday asked people between the ages of 18 and 44 not to queue up outside COVID-19 vaccination centres from May 1, saying the state hasn’t yet received doses yet. He said around 3 lakh doses of Covishield are expected by May 3, when the drive for vaccinating people above 18 years will commence.

Kejriwal said his government has placed orders for 67 lakh doses each of Covishield and Covaxin, which will be delivered over three months. “We aim to vaccinate everyone in the next three months if a sufficient quantity of vaccines is supplied by the companies,” he said.

Maharashtra health minister Rajesh Tope said on Wednesday that the vaccination drive will not begin on May 1 cannot be launched in the state due to an unavailability of doses. The state government plans to vaccinate its citizens in the next six months, he added.

Tope encouraged people to register on the Co-WIN portal, but asked them not to congregate at vaccination centres.

A committee comprising health department representatives and ministers will see if micro-planning can be done to implement the programme more efficiently. “The committee will discuss whether people from the age group can be categorised like 18-25, 25-35 and 35-44 age. The committee will discuss whether the 35-44 age group can be vaccinated first or those with co-morbidity among these will be inoculated first,” he added. 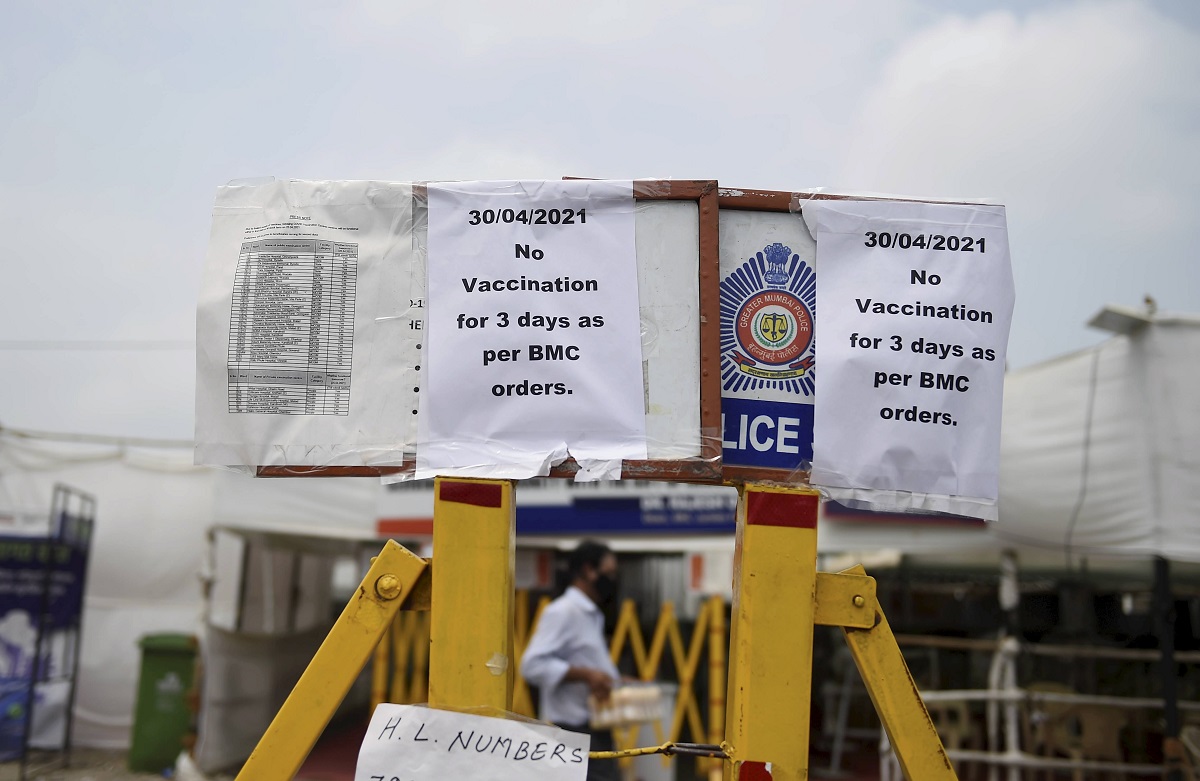 A notice reads ‘No vaccination for 3 days as per BMC (Brihanmumbai Municipal Corporation) orders’ pasted outside a COVID-19 vaccination centre in Mumbai, April 30, 2021. Photo: PTI/Kunal Patil

The state’s chief minister Jagan Mohan Reddy painted an alarming picture about the scale of the shortage, suggesting that those between the ages of 18 and 44 will have to wait until September to get a shot.

He said by then, everyone above the age of 45 will have been inoculated.

Jagan said the country is producing 7 crore doses per month and said there are 60 crore people aged between 18-45 age group, who would require 120 crore doses.

“It will take four months to complete the vaccination for people aged 18 to 44, which means they will be vaccinated not before January end next year,” Jagan said in a statement.

According to the Times of India, Jharkhand health minister Banna Gupta on Thursday said the state will not begin inoculating all adults on May 1, owing to the delay in getting doses from manufacturers.

“Both the companies told us that the Centre has placed advanced orders for 12 crore doses (10 crore of them from Bharat Biotech) already. Due to the sheer volume of the Centre’s orders, they will not be able to supply us the doses before May 15,” he said.

On Thursday, Gujarat chief minister Vijay Rupani said those between 18 and 45 years will have to wait at least until May 15 to get vaccinated. He said the government has placed orders with manufacturers, which are yet to be delivered.

“Vaccination for 18-45 age group will begin once we get substantial doses of vaccines from the pharma companies, which is likely to happen soon. Latest by May 15, the drive will start as we expect to get vaccine doses any time before that date,” Rupani said.

He said the state has ordered 2.5 crore doses, of which two crore are Covishield and 50 lakh are Covaxin.

Rajasthan also expects to begin the expansion only on May 15, according to the state’s health minister Raghu Sharma.

He said the state needs 7 crore COVID-19 doses to inoculate people between the age of 18-45 with doses, he said.

“There are 3.25 crore people of 18 years of age and above to be vaccinated. Total seven (crore) vaccines would be required for two doses, including wastage,” Sharma said in a statement.

He said an order for 3.75 crore doses of Covishield was placed with SII, which said the shots will be made available by May 15. 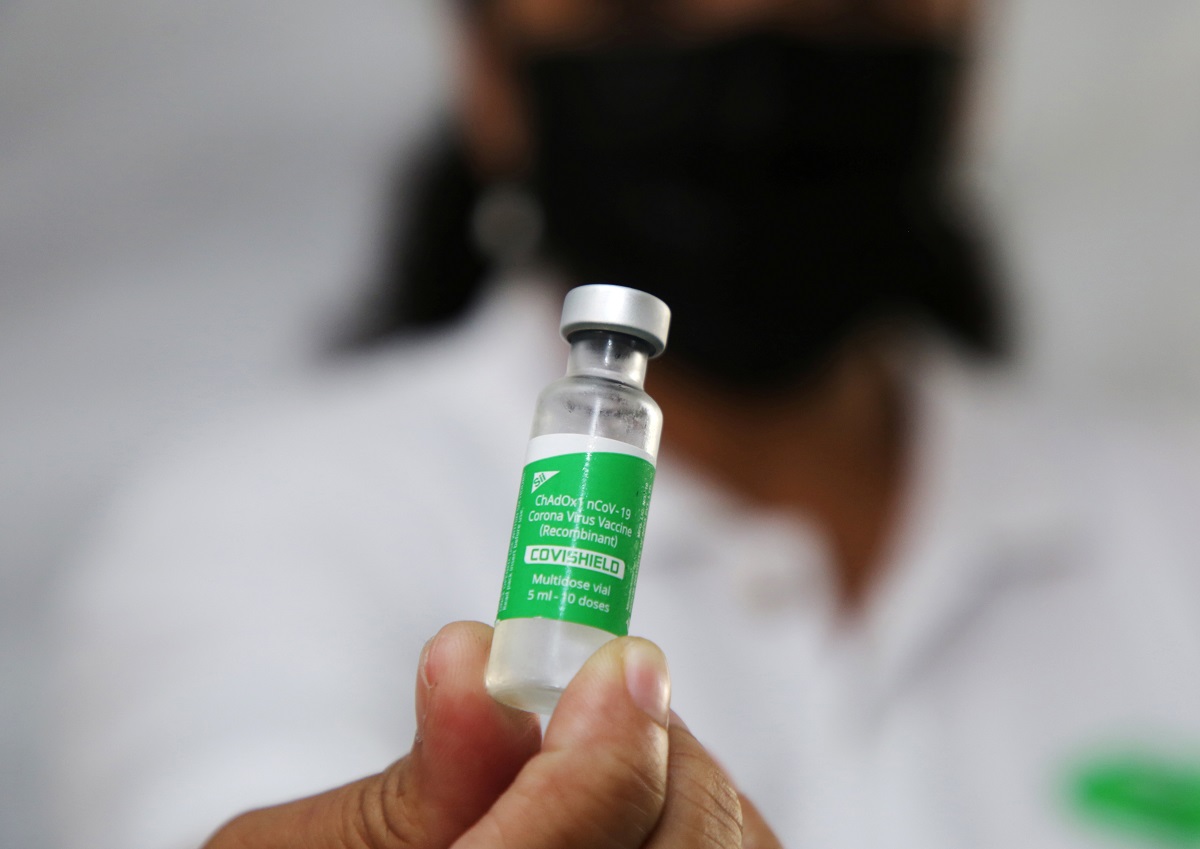 Punjab health minister Balbir Singh Sidhu also confirmed that the drive will be delayed, but could not say when it would begin.

“We are not getting adequate doses of vaccines. That is why we are facing problems. We have staff and required infrastructure for vaccination,” Sidhu told reporters.

The vaccination drive for the 18-44 age group will not start on May 1 in Madhya Pradesh as the manufacturers can not supply enough vaccine doses in time, chief minister Shivraj Singh Chouhan said.

“On contacting the manufacturers of Covishield and Covaxin vaccine candidates, we learnt that they are unable to give us doses for those above 18 years of age on May 1. So the drive covering the young people won’t start on May 1,” Chouhan said in a video message at night.

“Hopefully we will be getting [the doses] around May 3. After that we will give the final shape to the drive for the young people,” he said.

Telangana public health director G. Srinivasa Rao said there is no certainty on when stocks would be available to begin mass vaccination of all adults, though the state government is in touch with manufacturers.

“There are no possibilities (of vaccination on May 1)… [T]here is no vaccine available in the country. We are in search of the vaccine. We require around four crore doses,” he said.

He said the vaccine manufacturers could not assure the state government as to when they will be able to supply stocks.

According to India Today, UP’s health minister Jai Prata Singh said the state does not have any stocks of vaccine doses available, signalling a delay in expanding the programme. He said, “Global tender has been issued for the vaccine but there is no response yet. Orders of 50 lakh doses have been made to each of the two vaccine manufacturers, but we have not received anything yet. The current stock of vaccines is only available for the 45+ group, which is for the second dose.”

“It is not possible for us to start vaccinating people from 18 years to 45 year from tomorrow [May 1],” Karnataka health minister K. Sudhakar said on Friday. He was unable to say when the expansion will begin. but hinted it would take a few weeks at least.

“I cannot guess the date. I will prefer to tell the people about the date only after receiving the consignment from the vaccine manufacturing countries. I will not predict how many weeks it may take,” the minister said.

“We have made orders to Serum Institute in Pune for over one crore doses but the official news is that they are still not prepared to give it to us from tomorrow as scheduled,” the minister told reporters.

He asked people who have enrolled on the Co-WIN portal to refrain from going to vaccination centres on May 1.

“We have already paid Rs 400 crore to purchase one crore doses of Covishield,” the minister said.

According to him, the Serum Institute has the capacity to produce five to six crore doses in a month while the Hyderabad-based Bharat Biotech can produce one to 1.5 crore doses.

The Tamil Nadu government on Friday deferred its roll out the vaccination drive for the 18-44 year age group on May 1.

Explaining the predicament, Tamil Nadu health secretary J. Radhakrishnan said, “Instead of waiting [until May 1] and disappointing people, I wish to clarify that we are unsure when and how much out of 1.5 crore doses of vaccine sought by Tamil Nadu, will arrive.”

He said the state government has not yet received a reply from the Centre on the demand for vaccines. It is also unsure when and how many doses SII and Bharat Biotech will supply.

Chhattisgarh will also be delaying the drive, as manufacturers have informed the state that doses may not be supplied before May 1.

Chief minister Bhupesh Baghel said the government had forwarded its demand for 25 lakh doses each of Covishield and Covaxin to their manufacturers. Only Bharat Biotech (which makes Covaxin) responded to the demand, but said it can provide only three lakh doses to the state in the month of May, he said.

The Jammu and Kashmir administration also said the third phase of the inoculation drive will not begin from May 1. A new date will be announced once vaccine supply is established.

Goa chief minister Pramod Sawant on Thursday said the state will only start inoculation those between the ages of 18-45 “as and when” vaccine doses are available, making it clear that this would not be May 1.

The state has placed an order of five lakh doses with SII.

The Arunachal Pradesh cited “technical issues” for its delay in flagging off the expansion, saying it has been postponed for an indefinite period.

“The government has deferred the launch of the third phase of the vaccination drive till further orders,” he said. He declined to elaborate what these “technical” issues were.