COVID-19: The Adityanath Government Has Moved From Denial to Intimidation

Claiming that the state has the coronavirus situation under control, the Adityanath administration is suppressing all indications of what is actually happening on the ground. New Delhi: In an online meeting on Sunday, April 25, Uttar Pradesh Chief Minister Adityanath asked senior administrative and police officials to “crack down” on hospitals that discharge patients on the grounds of a shortage of oxygen or “complain” about shortages to the media.

After this meeting, Prashant Kumar, the state’s additional director general of police (law and order), issued a letter to all police officials in Uttar Pradesh which said that “misleading” social media posts related to the COVID-19 situation in the state must be penalised.

“It has come to our notice that misleading information, such as copy-pasted posts, is being shared on social media to create panic,” said the letter. “At present, it is very important to take strong action against unruly elements of society who put up misleading posts and to nip this misinformation in the bud. Tell your district’s social media cells to be active 24×7 and take action if any misleading posts intended to create panic are found.” 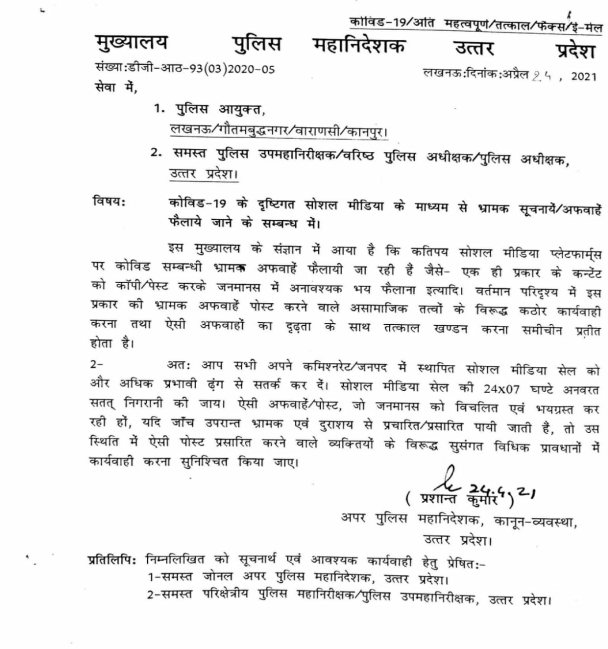 These instructions are already being acted upon, if evidence from some districts is anything to go by.

In line with this order, the Amethi police booked a man named Shashank Yadav under the Indian Penal Code amd Epidemic Act on Tuesday, accusing him of creating fear among the people after he tweeted on Monday: “Need oxygen cylinder, ASAP”. He had apparently required it for his 88-year-old relative.

The police took this action after Amethi MP Smriti Irani said she had tried to call the number provided in the tweet, but had not received a response. When the police went to Yadav’s home, they found him asleep, said Dinesh Singh, the superintendent of police. Singh alleged that Yadav’s motive had been to create a sensation and engender fear among the people.

The Amethi police also said that the 88-year-old patient in question had not been diagnosed with a COVID-19 infection and had not required an oxygen cylinder as he had supposedly died of a cardiac arrest. Of course, Yadav’s tweet did not say that his relative was COVID-19 positive.

An FIR was lodged against Yadav and he was served a notice under Section 41 of the CrPC (requiring appearance before police to prevent the person from committing any further offence).

In Gorakhpur, the CM’s home district, a private hospital posted a notice on April 24, a day before the CM’s meeting, stating that it would be unable treat patients of COVID due to a severe shortage of oxygen. A few hours later, the notice was removed and from then on, the hospital administration merely said that oxygen was being arranged.

The notice that had been posted by Durgavati Hospital on April 24 had said: “It is to bring to the notice of all attendants of patients in the hospital that due to a shortage of oxygen in the hospital, we will not be able to give your patient the required medical treatment. We are informing you in advance so you can shift your patient to another hospital as soon as possible.”

Also on April 24, Dr Manoj Yadav from Durgavati Hospital had told The Wire that it had been necessary to put up the notice because the oxygen shortage was severe.

“There are so many patients coming in that the hospital is unable to accommodate them,” he had said shortly after the notice was put up. “We have only five hours’ worth of oxygen currently and there is a crisis everywhere. Go and have a look at oxygen plants. See how many vehicles are waiting to get oxygen.” He had added that there were about 17 COVID positive patients in the hospital at the time. 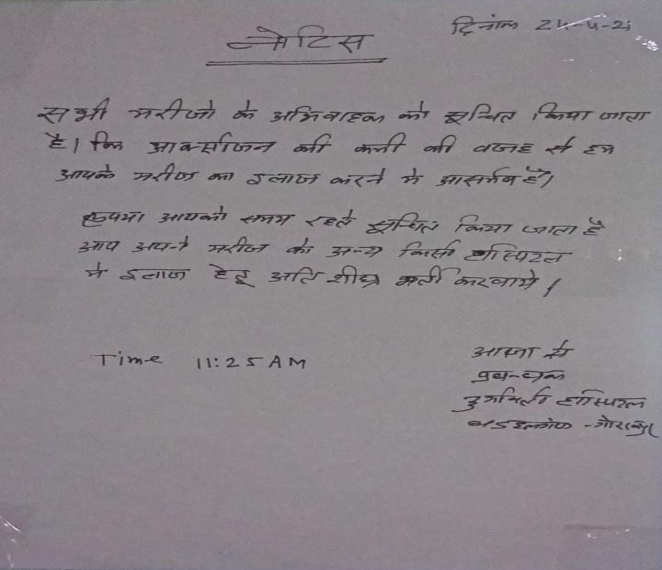 The notice that was put up on Durgavati hospital information board.

According to Manoj Kumar Singh, the editor of Gorakhpur News Line, a local news portal, the hospital had removed the notice under pressure from the Adityanath-led BJP government in the state.

“The hospitals here are all suffering from an oxygen shortage. But due to pressure from the district authorities, the hospitals are not openly speaking about it,” he told The Wire.

The following day, April 25, the CM made it clear that hospitals that reported a shortage of oxygen could face action.

The Telegraph quoted a state official as saying: “The chief minister said that action must be initiated against hospitals that put up notices saying they had no oxygen and the patients should be shifted elsewhere. He said there should be a probe to establish whether they deliberately tried to create panic.”

On April 23, a report published in the Kanpur newspaper Amar Ujala with the headline “476 Cremations, Pyres Burning Even After Sunset” said that there had been 476 cremations across different cremation grounds in the district on April 22. However, the official record of the COVID-19 deaths on April 22, which was released by the state government on April 23, showed only nine COVID deaths. 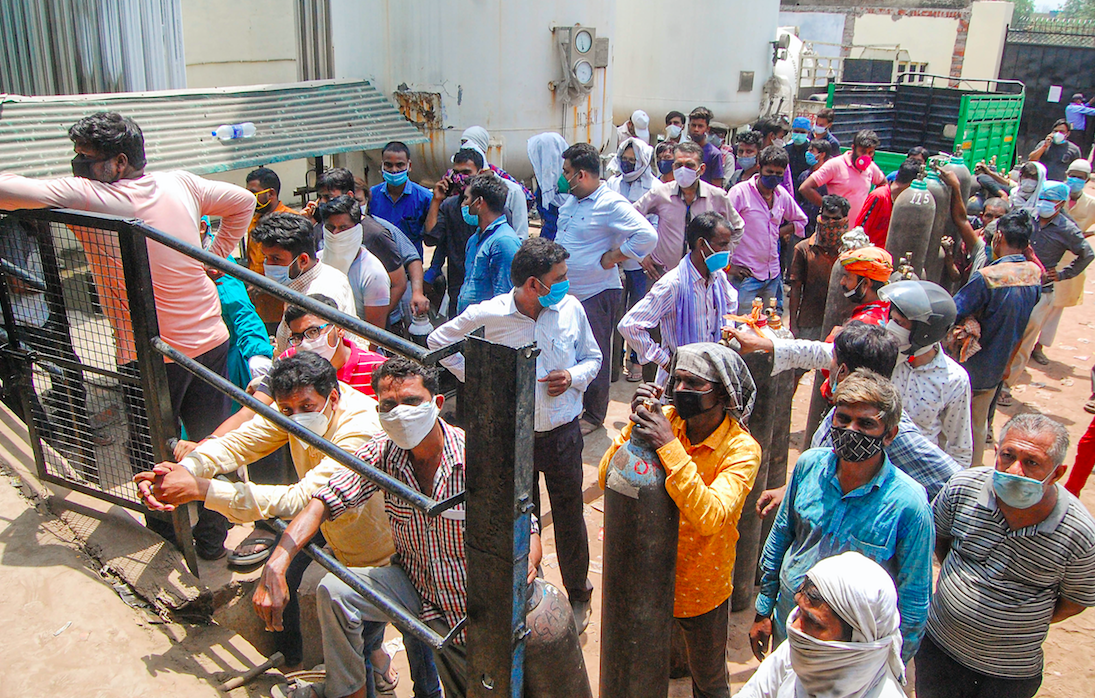 District officials alleged the report was “misleading” and Alok Tiwari, the district magistrate (DM) of Kanpur, wrote to the newspaper: “With reference to your news story which said that corona deaths have resulted in discontinuation of the [Hindu] tradition of burning dead bodies before sunset, investigation by the municipal commissioner has revealed that this news item is misleading and can cause people to believe that all the deaths were due to COVID-19 only. Your newspaper is a reputable newspaper and it is not expected that you would publish such misleading news.” 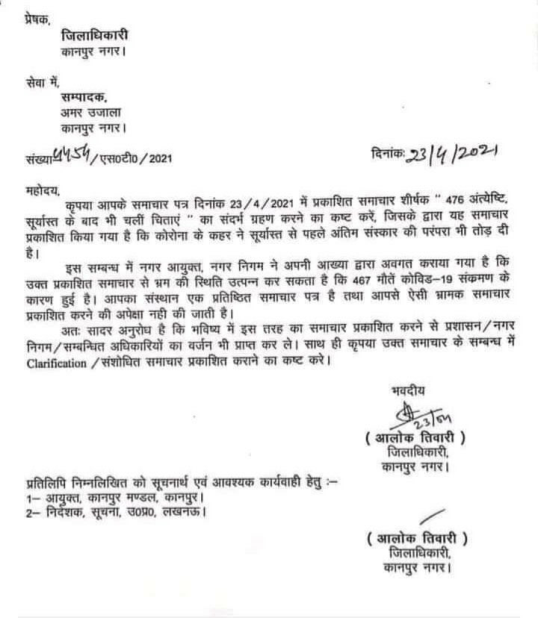 Notice sent by the district magistrate of Kanpur to Amar Ujala newspaper.

The letter continued: “You are requested to get the versions of the officers concerned before publishing such news items in the future. Please issue a clarification for this story.”

The administration maintains that the DM’s lettter was merely a request to the newspaper to be sensitive and not create panic in such a situation.

“It was a very polite and simple request to the newspaper, coming from a government functionary, requesting the newspaper to not publish articles that appear to be misleading,” Kanpur DM Alok Tiwari told The Wire. “I acknowledged that the newspaper is a reputable one. My quarrel was not to do with the numbers they had quoted, but the fact that it appeared as if all of those deaths were due to COVID-19. A casual reader might believe after reading such a story that all those deaths were due to COVID-19, which may create panic.”

Tiwari added that the newspaper has not yet issued a clarification. Meanwhile, Amar Ujala continues to publish reports from cremation grounds, stating that its staff are only reporting the facts as they are. And its editors say they can consider running a clarification only if the administration can point to errors in its story, which it has not so far done.

When asked about the sudden increase in the number of dead bodies at cremation grounds in the district, which contradict government records, Tiwari said, “There will be a sizeable contribution because of COVID-19 in the district. But the deaths have to be formally recorded as COVID-19 deaths by the authorities concerned. However, the numbers are definitely worrying.”

When The Wire contacted Ram Nagina, the municipal officer in charge of the COVID-19 death records in Lucknow’s cremation grounds, he refused to share any information. “I am busy and I don’t have the data right now,” Nagina said. 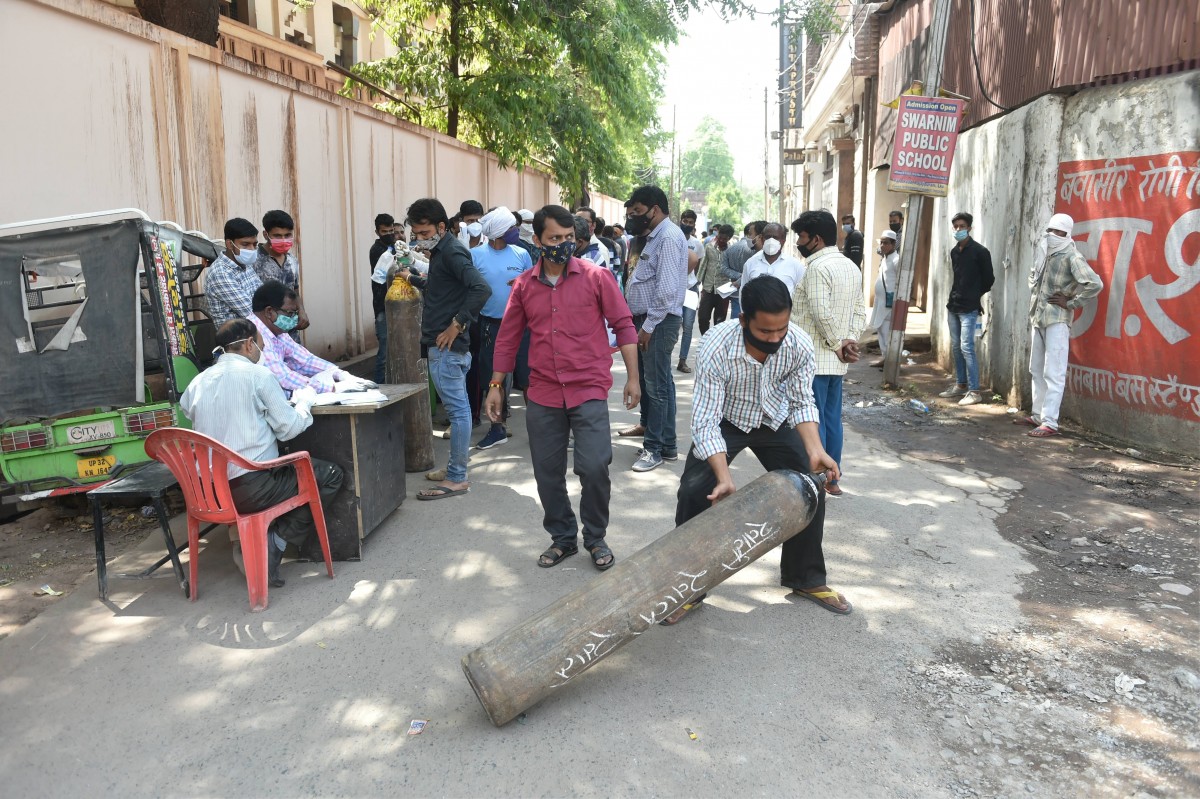 Family members of COVID-19 patients wait to fill their empty cylinders with medical oxygen outside an oxygen filling centre, as demand for the gas rises due to spike in coronavirus cases, in Lucknow, Friday, April 23, 2021. Photo: PTI

The Wire contacted Nagina after a report claimed that COVID-19 related deaths in Lucknow were being underreported. According to the report, a mismatch was found between the official figure of deaths reported by the state and the death count at crematoria across the city. Records from the crematoria showed death counts that were two to three times higher than the official death counts.

In what is perceived as an attempt to hide the actual number of COVID-19 deaths in Lucknow, the UP government installed opaque fencing outside cremation grounds after a video showing multiple burning pyres went viral on Twitter this month.

The Wire had previously reported on the underreporting of COVID-19 deaths in the Varanasi, Ghaziabad, Agra, Jhansi and Bareilly districts of Uttar Pradesh.