As Demand for COVID-19 Tests Rises, Labs in Delhi and Mumbai Are Running Out of Kits

Many labs have also said that the 24-hour rule has led them to limit the number of collections a day at a time when case count is rising. 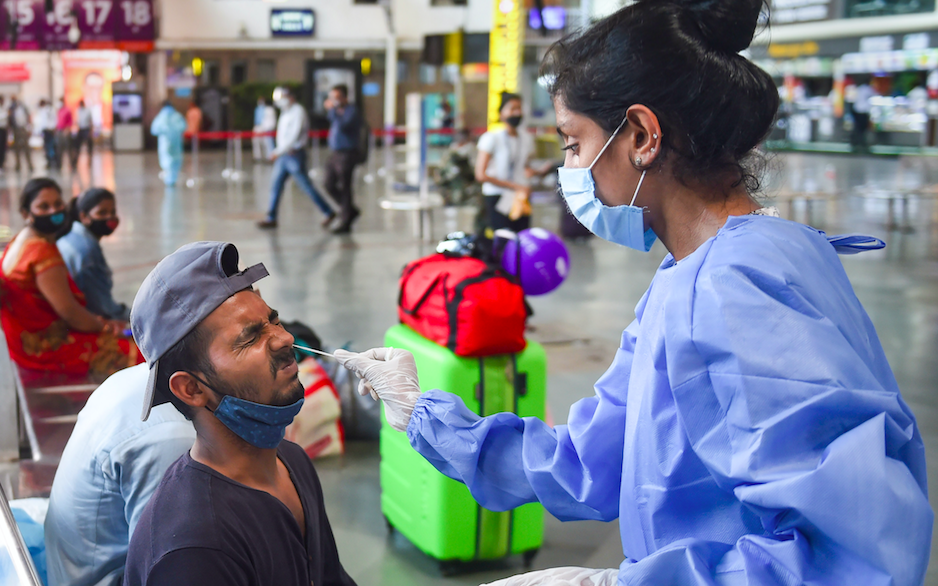 A health worker takes a swab sample of a outstation passenger for COVID-19 tests at the Chhatrapati Shivaji Maharaj Terminus, amid the ongoing surge in coronavirus cases, in Mumbai, Monday, April 12, 2021. Photo: PTI

New Delhi: The surge in COVID-19 cases, the requirement of entire families to get themselves tested and the demands raised by various state governments upon travellers to carry a negative RT-PCR test report have all cumulatively led to a shortage of testing kits and delays in preparation of reports by the authorised labs.

In Delhi NCR and Mumbai, some of the labs have also started running out of test kits and are left with no option but to delay the pick up of samples since they are mandated to provide reports within 24 hours.

Labs delaying picking up of samples

A resident of Noida, Anita*, who tested positive along with her husband and two children late last month, said the waiting time for tests has gone up. “Earlier, when we had thought we had contracted COVID-19 and called for testing, the collection agent had turned up on the same day to take the samples. But today, when I called him to ask for tests, he said he would only be able to come tomorrow,” she said.

The Wire has also learned of labs refusing to pick up samples. Nisha*, a resident of Delhi, who wanted to get her family members tested as they had come in contact with others who had tested positive, said she tried three prominent labs but they all refused to take samples.

A customer care executive from a prominent laboratory initially told Nisha that there were no tests available, and when pressed, said that the laboratory had run out of tests. However, a phlebotomist associated with the same laboratory said that technicians were still in possession of testing kits and offered to conduct the test for an increased price.

Since the beginning of this month, over a million COVID-19 tests have been done in Delhi alone. Over 70,000 people tested positive during the period. On Sunday, the daily positivity rate stood at 9.43% and now over 100,000 tests are being performed daily. 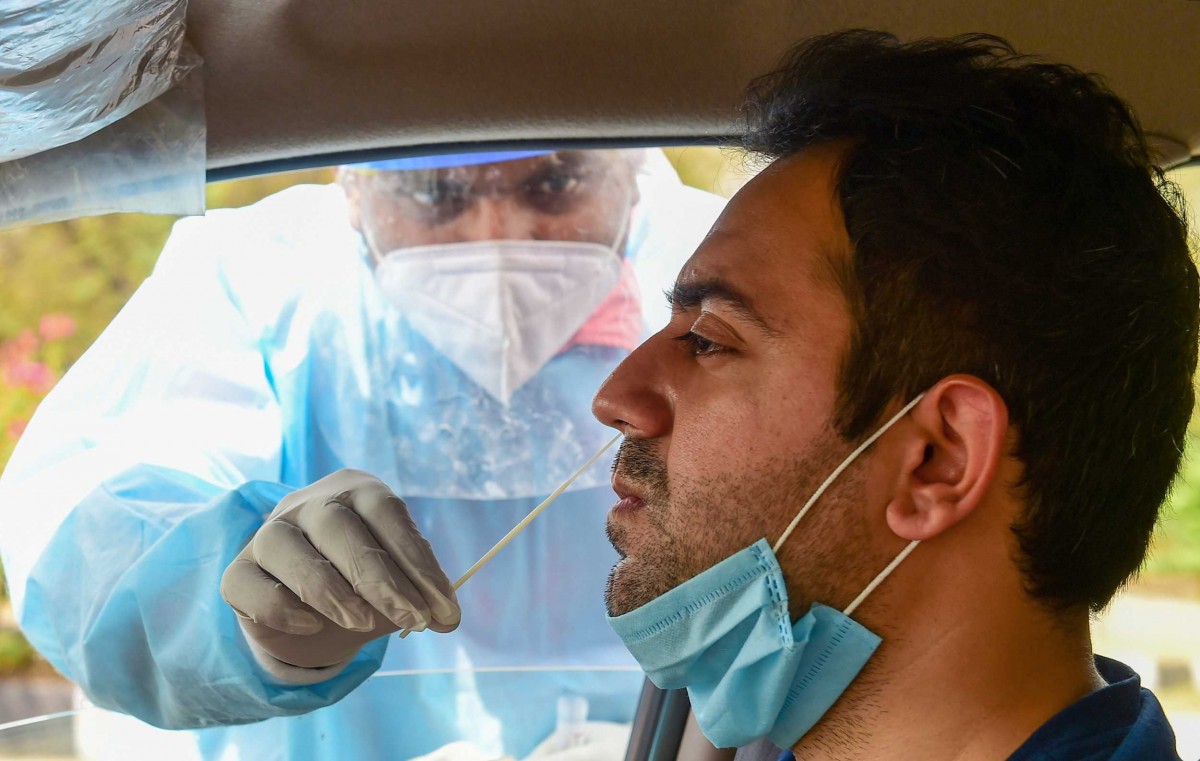 A health worker collects samples of a motorist for Covid-19 tests, as coronavirus cases spike across the country, in New Delhi, Monday, April 5, 2021. Photo: PTI/Kamal Kishore

Labs running out of testing kits

Shiv Kumar, a blood sample collection agent, who lives at Dwarka in Delhi said a large number of labs have started running out of RT-PCR test kits. Kumar, who is associated with nearly 50 different labs, said, “Over the past few days many of them have started saying that they have run out of stock.”

Collection agents like him have seen the testing demand rise from two to four cases daily rise to nearly 50 cases a day over the past 10 days. He said, “In most households, people now tend to get all the family members tested.”

Despite the increase in demand, Kumar said the rates for testing have not changed and remain constant at Rs 900 each. “The only difference now is that while the bigger labs take anywhere from 36 hours to 48 hours at the minimum to provide the results, the relatively smaller ones still provide the reports within 24 hours.”

Kumar said if labs no longer provide testing kits, collection agents like himself would have to purchase them on their own. This would lead to an increase in the overall cost. “The biggest challenge is to get a hold of these kits. Prominent markets for medical goods, like Bhagirath Place in Delhi, also do not have these.”

Another reason for the increase in demand of tests is that various states need a negative RT-PCR test from people entering them.

A resident of Delhi, Saraj* who was to go to Rajasthan, said: “I got a test done last week to travel to Rajasthan. A prominent private lab took nearly 48 hours to provide results.”

Following the surge in cases in 10 states, many others have also imposed travel restrictions.

It is mandatory for people coming in from Maharashtra to carry a negative test report while entering their jurisdictional boundaries. Some states like Himachal Pradesh have also made it mandatory for people coming from states like Punjab, Delhi, Maharashtra, Gujarat, Karnataka, Rajasthan and Uttar Pradesh to carry negative RT-PCR test reports with them. Likewise, Odisha has made RT-PCR tests compulsory for all visitors from outside the state. 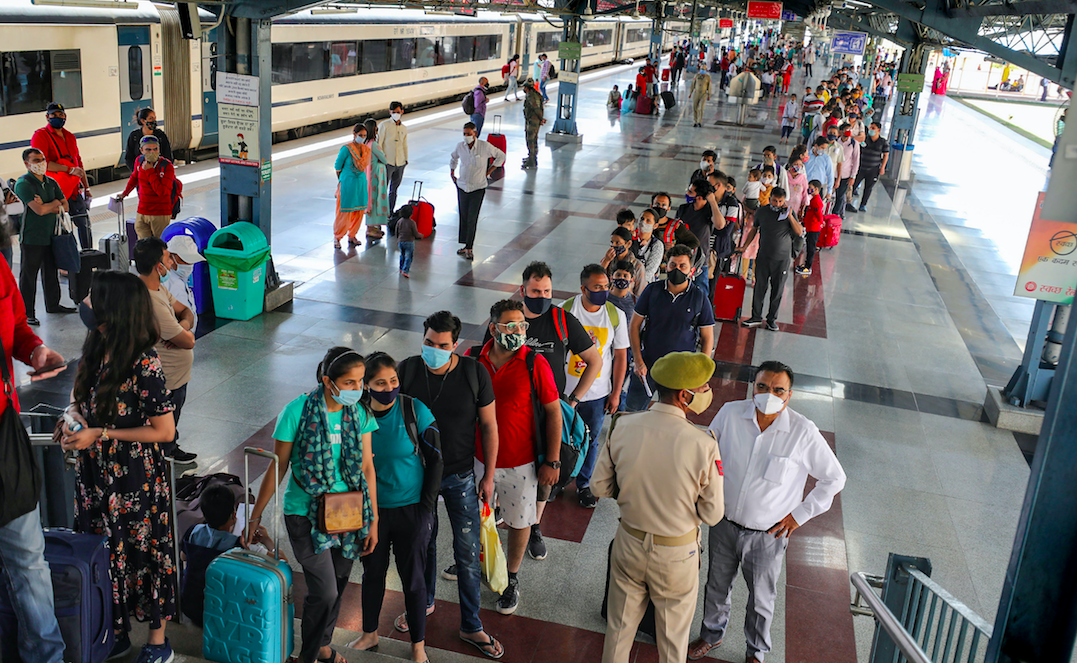 Pilgrims wait to be tested for COVID-19 after arriving in Katra to visit the Mata Vaishno Devi shrine, amid the ongoing surge in coronavirus cases, in Reasi district, Monday, April 12, 2021. Photo: PTI

In Uttarakhand, where the Maha Kumbh is in progress and the state government has come in for much criticism for its handling of the event and the way it allowed large crowds to congregate at such a time, the Union Health Ministry has stepped in and made it mandatory for visitors to carry negative RT-PCR reports if they wish to attend the mela.

Also read: Uttarakhand CM Doesn’t Get It When He Says We Shouldn’t Compare Kumbh to Markaz

Some airlines, like Vistara, have also made it mandatory for fliers to certain states to have negative RT-PCR tests. It recently put out notices saying “passengers need a valid negative RT-PCR test report conducted within 72 hours of arrival at the destination airport” if they are travelling to Maharashtra from states like Gujarat, Rajasthan, Goa and Delhi.

This too has led to an increased demand of these tests.

The high demand for testing has severely impacted Mumbai, where laboratories have been inundated with requests for COVID-19 tests. The state government had issued guidelines under the “Break the Chain” initiative on April 4 for making RT-PCR tests mandatory for those working in eateries, the film industry, the transport sector and home delivery services.

A journalist residing in Mumbai, Shruti*, said that her report came after 80 hours. But, even finding a lab, she said, was an arduous task. “I was turned down by two labs, both reputed. Most labs said they don’t have kits.”

Though Municipal Commissioner Iqbal Singh Chahal on Monday asked all the laboratories to enter data of the samples processed between midnight and 6 am, and to issue reports to the civic body within 24 hours, this has only led to the labs taking on only a limited number of tests.

Labs in both cities have acknowledged that there has been a sharp increase in the demand for tests and that the mandate for providing reports in 24 hours was not actually helping.

The chairman and managing director of Thyrocare, Dr A. Velumani, was quoted as saying in Mumbai,: “For three days last week, we had to completely stop taking new clients.” He said the reports have been taking 36 hours as the number of samples have risen sharply since mid-February.

“After the first wave passed, the volume had come down to 2,000 samples a day, but it suddenly jumped to 15,000 a day this February when we entered the second wave,” he pointed out, adding that his lab’s collection and testing capacity was 12,000 samples per day at present.

In Delhi NCR, the situation is no different with the labs which are struggling to meet the increased demand for tests. Here too the labs have been insisting that the 24-hour deadline was putting additional burden on them.

The head of Prognosis Laboratories, Dr Deepak Sadhwani, said his lab was finding it “difficult to match the current surge and increase in demand.” He said though his lab had already scaled up its capacity during the first wave, the new surge or second wave has taken everyone off-guard. “The situation was different 10 days ago. We are trying to find more people to strengthen the team,” he added.

Chairman of Dr Lal PathLabs, Dr Arvind Lal, has also been quoted by the media, saying, “The government should allow us to expand timings for sharing the report”.

He insisted that the demand to submit the report in 24 hours was putting a burden on the testing facility. “If we are allowed to increase the turnaround time to 48 or 72 hours, we will have the buffer period to cater to everyone. In this way labs can continue with testing, and there is less likelihood of the patient getting away,” he explained.

The Wire has found that on the online portal of Dr Lal PathLabs, the first open slot for an RT-PCR test in Delhi is April 17, 11 am. In the time that it has taken for the report to be published, it is likely that the next available slot is further away.