Registering a steady increase for the 29th day in row, the count of active cases has gone up to 9,10,319. 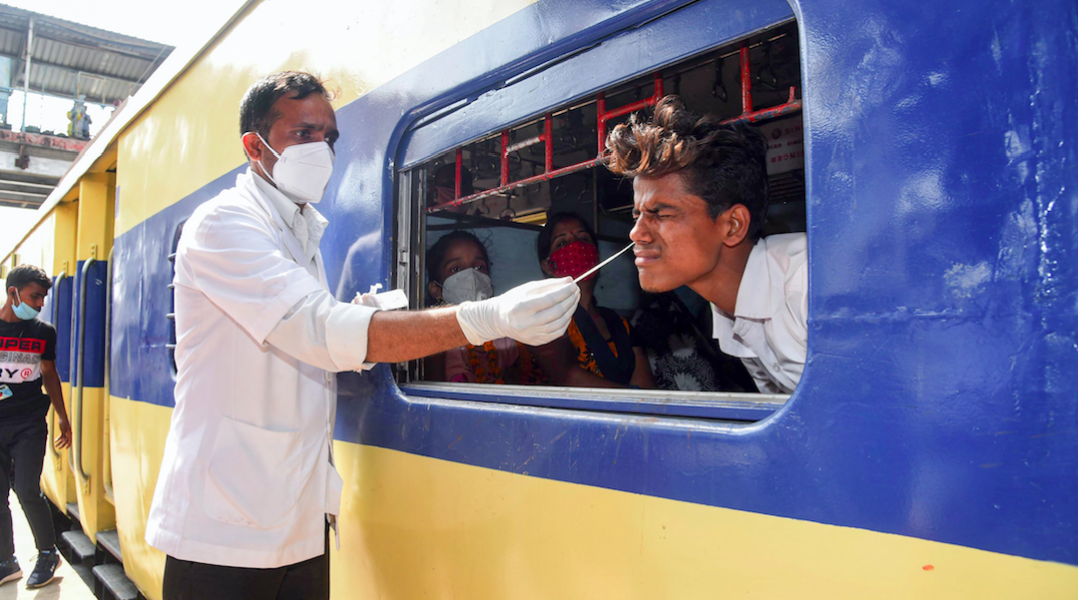 A health worker in Patna takes swab sample of a passenger sitting inside a train for COVID-19 test, as coronavirus cases spike across the country. Photo: PTI

The death toll due to the disease in the country increased to 1,66,862, with 685 new fatalities being reported in a day, according to the data updated at 8 am.

The active COVID-19 caseload in the country was recorded at its lowest of 1,35,926 on February 12, comprising 1.25% of the total infections.

The number of people who have recuperated from the disease surged to 1,18,51,393, while the case fatality rate has dropped to 1.29%, the data stated.

Amidst rising cases, several state governments have brought curbs and night curfews, including Maharashtra (on weekend lockdown) and Delhi (curfews at night).

The Indian Medical Association and chief ministers of Delhi and Maharashtra have both asked for lowering the age of those who can receive shots to 18. The Centre has taken a dim view of this, with the Union health minister saying that such demands are politically motivated, in a lengthy letter.

There is also concern over vaccines running out. Maharashtra health minister Rajesh Tope said on Wednesday that many inoculation centres in Maharashtra are being shut due to the shortage of the vaccine. The state now has 14 lakh doses which would last just three days, he said. However, three states – Assam, Tamil Nadu and Kerala – recently concluded their assembly elections and one, West Bengal, is in the midst of eight-phase polls. Polls were also held in the Union Territory of Puducherry and for the Tripura Tribal Areas Autonomous District Council, on April 6.

Although the polls were held amidst caution, campaigns before the polls saw large crowds and rallies in contravention of COVID-19 guidelines.

The Union Health Ministry has said that more than 70% of the deaths occurred due to comorbidities.

“Our figures are being reconciled with the ICMR,” the ministry said on its website, adding that state-wise distribution of figures is subject to further verification and reconciliation.