According to the report, some workers said they could not go home as they had not been paid their wages by respective construction firms. 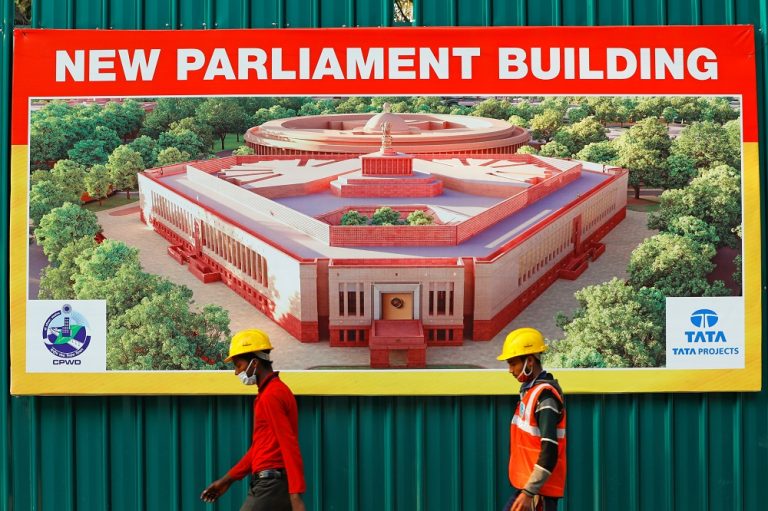 New Delhi: As the country in general and national capital in particular reels under a severe health crisis, with its health system under pressure amid a rising number of COVID-19 cases, the work on the Modi government’s Central Vista project has been permitted to continue as an “essential service”, Scroll.in has reported.

Delhi, which has been under a complete lockdown for over a week, reported 20,201 cases and 380 deaths on Tuesday. India‘s COVID-19 death toll neared two lakh with 2,771 fatalities reported on the day, with overburdened hospitals turning away patients due to lack of beds and a continuing oxygen shortage.

When a weekend lockdown was announced in Delhi on April 16, the Central Public Works Department – which is overseeing the project – wrote to the Delhi Police to allow the contractors to “ferry their workers to and fro from their labour camp at Sarai Kale Khan through their own buses during curfew period,” according to Scroll.in.

The contract for the project has been given to Shapoorji Pallonji and Company Private Limited.

On January 5, the Supreme Court had given a go-ahead to the Central Vista project that envisages a new triangular parliament building, with a seating capacity for 900 to 1,200 MPs. The project is to be completed before November 30, 2021.

Even after the national capital went under a complete lockdown on April 19, at least 180 movement passes were issued by the deputy commissioner of police for New Delhi district for workers engaged in the Central Vista project. The passes were granted under the “essential services” category.

Those workers who are staying on site can continue to work during the lockdown, the Hindu reported, citing government sources. However, as per the Scroll.in report, workers said they were commuting to work daily on buses arranged by the subcontractors.

Workers under one of the subcontractors, BP Engineering Limited, told Scroll.in that there were no living arrangements for them on the Central Vista or anywhere near it, and that they lived in rented rooms at three locations – Karol Bagh, nearly 8 kms away; Sarai Kale Khan, 7 km away; and Nizamuddin, 5 km away.

BP Engineering has at least 30 workers on the site who work on 12-hour shifts, a supervisor told Scroll.in on condition of anonymity.

Workers under another subcontractor, the Chaudhary Construction Company, told the news website they had been asked to stay in makeshift accommodation in Janpath, central Delhi, which is around 2 km away from the site.

Another subcontractor, MV constructions, had to temporarily suspend work because 200 of its workers left the city after the lockdown was announced on April 19, Rati Ram Kevat, a supervisor with the firm told Scroll.in.

He also told the news portal that at least 500 workers were working on the project site under various subcontractors before the curfew was announced.

Many have criticised the central government on the amount it is spending on the project and have compared it with the amount needed for a better health infrastructure in the country even as patients are dying gasping for breath due to oxygen shortage and lack of beds.

COVID crisis
No Tests
No Vaccine
No Oxygen
No ICU…

Workers at the mercy of the firms

Some workers told Scroll.in they were not paid their wages and hence decided to stay back in the city. Shri Kumar Chauhan, who works at MV Constructions, told the news website the company had not paid him his monthly wages of Rs 12,000 since March. He says he’s eager to be with his family and vote for the upcoming panchayat elections in Uttar Pradesh.

Another employee, Vijay Kumar, who also works at MV Constructions, was promised wages of Rs 500 daily when he started working on March 22; however, he only received weekly payments of Rs 1,000, and now even that has stopped.

Sanjay Singh, the proprietor of MV Constructions, told Scroll.in, “I had given their supervisor the money for their daily allowance but he must have not disbursed it.”

Kevat expressed his ordeal to the news portal and said he has also not being paid his salary of Rs 12,000 for a month. Last year in March, he had walked 578 kms away to his village in Tikamgarh, but this time he has decided against going home. “I watch the news but I feel so bad that I just switch it off…Some people are not getting beds and I read there is no space in the crematoriums either.”

A 28-year-old worker from Jaunpur told the news website that the work at the Central Vista will not stop. He further said: “I do not have a problem going back [to Uttar Pradesh], but if anything happens to me, then my family cannot come here.”