COVID-19: When Scientists Model Answers to Questions No One Needs Answered

The need of the hour isn't better modelling but a concerted effort to force the government to listen to scientific expertise. 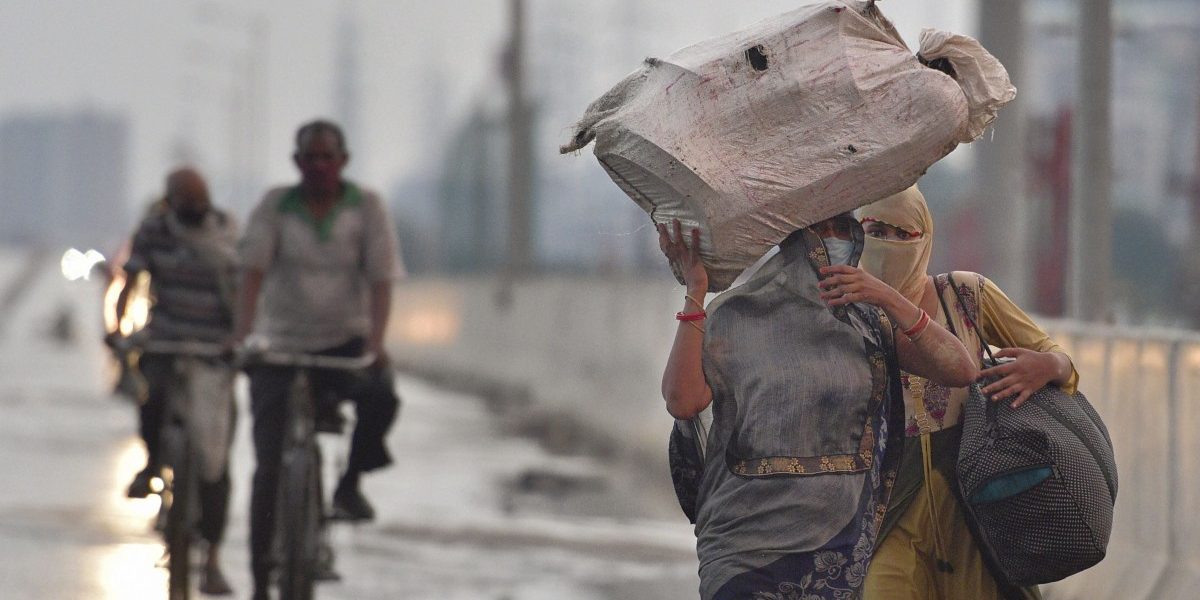 Indices are the sort of thing the ruling establishment adores. A single number that is purported to contain within it multitudes. We are taught to obsess over GDP growth as if it were the sole signifier of the ‘economic health of a nation’, as if all aspects of the economy were adequately reflected in it alone. The NITI Aayog on May 22 introduced another index to measure the efficacy of the Modi government’s response to the COVID-19 pandemic: the number of deaths averted due to the lockdown. Unsurprisingly, they estimated a large number and patted themselves on the back for a job well done.

Even the most objective of indices, however, is just a neutral indicator, a warning sign or, in happier circumstances, a milestone. As a result, they ought to be used cautiously. They hide at least as much, and often far more, than they reveal. Their value-blind nature subtly nudges us to think, for example, of the “number of deaths averted” as akin to the physical properties of a substance like weight, volume or temperature.

Except indices don’t work like that. The sheer absurdity of this index should have been enough reason to not engage with it. When taken in isolation, such indices often lose their meaning and relevance.

Many scientists don’t think so, apparently. A press release by the Indian Scientists’ Response to COVID-19 (ISRC) on May 27 begins with an extraordinary sentence:

“How many deaths have been averted due to the lockdown? This has been uppermost on everybody’s mind.”

For context, our country has just witnessed a draconian, militarised and ill-planned lockdown dominated by widespread starvation and interspersed with communal hatred – in short, a full-blown humanitarian crisis. It has destroyed the lives of a large fraction of the working poor and, when surrounded by such devastation, this statement is baffling.

So when scientists say “uppermost on everybody’s mind”, who is counted (and who is ignored) amongst “everybody”? Is this the question uppermost on the minds of the more than 10 crore migrant workers who have seen their lives turned upside down during the lockdown? Or perhaps it is uppermost on the minds of the millions of tuberculosis-infected patients, whose disease was first ignored and is now forgotten? Or does “everybody” really only mean the elite academic circles – and the ruling establishment?

But these are strange times. An index presented by the government as proof of its own merits and which is amenable to mathematical modelling becomes worth considering. While many scientists have rightly expressed concerns that “estimates” released by NITI Aayog lack transparency – almost nothing is known about how they are estimated – this also produces a shift in the discourse from asking about the usefulness of such indices on the one hand to doing science in a “transparent manner” on the other. Left unanswered, in the process, is the fundamental question: is there any sense in estimating the worth of a lockdown in this manner?

An article recently authored by eminent scientists elaborated on the ISRC press release. They expressed their concern that “next to nothing” is known about how the estimates the NITI Aayog were using to conclude that the nationwide lockdown was an unqualified success were arrived at, writing:

“Unfortunately, such a lack of transparency and unwillingness to communicate meaningfully is pervasive.”

They contrast the officially promoted estimate of  37,000-78,000 deaths averted against the results of simulations carried out by groups affiliated to the ISRC, which “predict” that between 8,000 and 32,000 deaths were averted by May 15. They underscore the importance of transparency, writing:

“Compared to the government’s numbers, this is a more conservative but likely more robust estimate, since it is obtained from what is the most detailed epidemiological model available currently for India. Importantly, all information regarding what we do is publicly available and therefore open to general scrutiny and criticism.”

In my view, this is entirely the wrong question to focus on, and how transparently they have arrived at their estimate is irrelevant.

The Narendra Modi administration has demonstrated an uncanny ability to control the narrative surrounding the crises that have erupted during its tenure. This feat was made possible in no small part by the near-total capitulation of an independent media, and aided by an army of trolls that operates on social media, engineering public discourse to suit the interests of the sitting government, through an aggressive campaign of misinformation, slander and whataboutery.

Unfortunately, by choosing to engage with the question of how many deaths were averted due to the lockdown, efforts to fact-check the studies that informed the NITI Aayog’s victory lap reinforce the unfounded claim that the nationwide lockdown was a crucial step in India’s fight against the novel coronavirus.

It’s plain that the lockdown has only delayed the pandemic’s peak instead of eradicating the disease, attested to by the rising number of cases: each day we register 10,000+ new ones. So what meaning could the “number of deaths” during the lockdown possibly have? It’s also difficult to understand how such estimates can be generated when the fight against the novel coronavirus is far from over. We have no reason to believe that we’re close to seeing the end of this pandemic in India.

Rather than engaging with a meaningless question the government wants everyone to ask, there are surely more useful questions we need to be flagging:

1. How many deaths could have been averted if the government had taken the disease seriously when the first cases of COVID-19 were being detected?

2. How many deaths could have been averted if international travel had been suspended a few weeks earlier?

3. What is the human cost of the lockdown? Is it only measured in terms of “deaths averted”? What about the crores of people who have lost employment and hence crores of families who face daily starvation?

One can go on. But for the index aficionados, the question we want to ask is: should the success or failure of a lockdown not be measured in terms of a weighted average over many such indices? Did their “transparent” model do this? And if it didn’t, the model may be transparent but it is also exclusionary. It fails to take into account the impact the lockdown has had on a majority of the population of this country.

When scientists fail to realise it is this impact we need to be quantifying, they inadvertently end up lending credibility to what was at best a ham-handed effort at mitigating this crisis, one in which the government placed a higher priority on public relations than human life.

And then there are academics who use data to claim that the Modi administration has fared better than the governments of Brazil and the US. We simply can’t judge a humanitarian crisis unfolding here by stating that it is less severe than a crisis elsewhere. Our primary concern should be about the predictable consequence of our own government’s actions, as that is what we can affect.

To be fair, the scientists who critiqued the NITI Aayog estimates of “deaths averted” correctly note that “deaths in the wake of the movement of migrant workers, and the increased risk of infection spread due to their return to relatively less affected regions of the country, are also corollaries” which need to figure in the discussion. But in the end, their estimate of “lives saved” – even if substantially lower than the official claim – becomes the key takeaway for most readers.

The fact is that the nationwide lockdown itself has killed over 700 people. It has without an iota of doubt led to an unprecedented humanitarian crisis – one that exacerbates the already extant inequalities in access to healthcare, that has engendered widespread economic insecurity and has visited untold grief and suffering on an already vulnerable working-class population. It’s not inconceivable that the catastrophic circumstances we find ourselves in will undermine any efforts to control the spread of the epidemic to more rural areas of the country, where healthcare is barely accessible.

This is why I believe scientists must not allow the current administration to set the metric by which the success or failure of the lockdown has to be measured.

Need of the hour

“India … has also been adversely impacted with a catastrophic ‘double burden’: 145,000+ cases and 4,000+ deaths, coupled with a humanitarian crisis that encompasses an estimated 114 million job losses (91 million daily wage earners and 17 million salary earners who have been laid off), across 271,000 factories and 65-70 million small and micro enterprises that have come to a halt.”

While denouncing the “incoherent” strategy adopted by the Modi administration, they add that the administration would have been better served if it had consulted “epidemiologists who had better grasp of disease transmission dynamics compared to modellers.” That “the engagement with expert technocrats in the areas of epidemiology, public health, preventive medicine and social scientists was limited.”

Also read: Should You Believe What the COVID-19 Models Say About India?

We are led to an inescapable conclusion: that perhaps the need of the hour isn’t better modelling of a ‘scenario’ the government would like us to focus on, but rather a concerted effort to force the government to listen to scientific expertise in the relevant areas of epidemiology, public health and social science.

No one needs the question of “How many deaths has the lockdown averted?” answered. With the best of intentions, those attempting to answer this question end up playing into the hands of a brutish administration, which will happily quote even their conservative, transparent estimates as a justification for a bungled attempt at disaster mitigation so horrifying that, in a functioning democracy, it would invite the resignation of its cabinet ministers.

Malhar is a scientist from Bangalore.

Note: This article was edited on June 15, 2020, to better reflect – and make more explicit – the broad concerns that the authors of the Indian Express article highlighted in their own estimate of the lockdown’s impact on COVID-19 fatalities.