Content Creators, Vloggers in J&K Are Suffering After the 'Temporary' Ban on Drones

The lack of aerial photos and videos has led to a loss of income, content creators say. 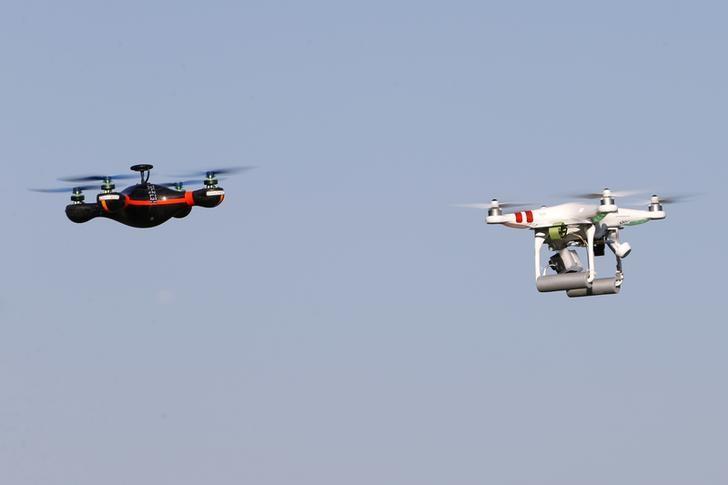 Srinagar: On the one hand, the Jammu and Kashmir administration has launched a film policy to facilitate growth of the film industry in the region, but on the other, it has imposed a blanket ban on drone cameras. This ban has been bad for business for local filmmakers and vloggers.

On the second anniversary of the dilution of Article 370, on August 5, J&K Lieutenant Governor Manoj Sinha in presence of actor Aamir Khan and filmmaker Rajkumar Hirani launched the union territory’s film policy, with provisions to set up of a film development council and revive closed cinema halls.

Despite the film policy being welcomed by local content creators, they also accused the government of hitting their business by ordering a ban on the use of drone cameras, which they called “vital equipment in videography”.

Following a drone attack at an Indian Air Force base in Jammu on June 27 this year, the administration in various districts of J&K including Srinagar ordered a ban on the sale, possession and use of unmanned aerial vehicles including drone cameras.

The unmanned aircraft system (UAS) commonly known as a drone camera allows aerial photography and videography. Drones are easily available for purchase in India and come in different sizes and weights.

Drones are divided into five categories — nano (weighing up to 250 g), micro (250 g to 2 kg), small (2-25 kg), medium (25-150 kg) and large (over 150 kg). All drones except nano drones require a licensed pilot and a permit from the Director General of Civil Aviation (DGCA), across India. Altitude and speed restrictions also vary depending on the category of the drone.

Drones have become an important asset for content creators. But the recent ban on drone cameras in J&K has dented the business of a number of vloggers, cinematographers and filmmakers. It has also hit event management enterprises that use drones for filmmaking, advertisements and shooting ritual ceremonies.

Despite following the rules of Directorate General of Civil Aviation (DGCA), the regulatory body in the field of civil aviation, content creators in various districts of J&K are not allowed to use, possess and transport drones. Even those who had registered their drones on the DGCA website and possessed licenses have been ordered to submit their drones in the nearest police station.

Already in a difficult position because of the prolonged internet restrictions in the Valley, content creators say the latest ban is adding to their troubles. Many of them would send drone footage of the picturesque Kashmir Valley to film directors and advertisers to make a living; now, with drones banned, they say the freelance video rate has dropped sharply.

Ruman Hamdani, a 29-year-old filmmaker from Srinagar, told The Wire, “Drone footage, mainly the landscape view of alpine lakes, mountains and forests of Kashmir, was selling like hot cakes across the world but now the rates have drastically reduced ever since the government imposed the drone ban.”

In 2017, Hamdani took a loan to purchase a drone camera. However, before the government could ban drones in J&K, Hamdani said his drone crashed during a video shoot. “I have sent my drone camera for repair in Delhi but I am not taking it back now, as the government has asked us to submit drone cameras in police stations. The government should review and regulate drone policy so that licenses can be provided to professional content creators.”

Also read: ‘What About Us?’: Kin of Victims Decry Move to Rename J&K Schools After Security Personnel

He claimed that he had registered his drone camera weighing more than 250 g and below 2.2 kg on the DGCA website and also received permission from the J&K tourism department.

Hamdani termed the government’s order of banning drones frustrating. “In some districts the government has banned drone cameras, but in others there is no ban. I wonder how a content creator from Srinagar who is not allowed to possess and transport drones can shoot in other districts where drones are still not banned.”

Before the government in Srinagar ordered the drone ban, the person behind ‘Discovery Kashmir’, a social media page promoting Kashmir’s tourism sector, was asked to report at the Nishat police station in Srinagar, where he was questioned about sharing a drone shot downloaded from another Instagram page taken near Dal Lake.

The admins of both these social media pages were made to spend an entire day in the police station being questioned, and the drone used for filming was confiscated.

“We both were called to the police station where policemen questioned us. The drone camera worth lakhs of rupees was confiscated. After a day-long stay inside the police station, we were released with a direction that no drone camera or drone shot should be used in our photography and videography,” the administrator of Discovery Kashmir told The Wire.

Reacting to the ban, Tasaduq Hussain Baba, an advertisement cinematographer from Srinagar, told The Wire that the government is snatching the livelihood of a number of wedding photographers and aerial cinematographers in Kashmir.

“The ban on aerial cameras has badly affected the business of Srinagar-based photographers and cinematographers. Content creators had invested their hard-earned money to purchase these drone cameras but now they are unable to use them,” said 28-year-old Baba.

Baba, who has worked on national and international advertisement projects and films, suggested that the government. instead of ordering a blanket ban on aerial photography, should create a governing body which will decide on the use of drones under various terms and conditions.

Reacting to the ban, Imad-ur-Rehman, a 32-year-old vlogger from Srinagar’s Lal Bazar area, told The Wire, “Ever since the government issued a ban on the drone cameras in J&K, I became so unmotivated that I no longer do outdoor videography.”

Imad said the ban on drones has also affected the viewership of on his YouTube channel. “Prior to the drone ban I used to earn $200 to $300 from YouTube, but this month I was only able to earn $100 which is disappointing.”

Every content creator, Imad said, has a unique selling point – and his was drone videography. He has been using both nano and micro drones for his videography but now he says he can’t use any after the government issued a blanket ban on drones.

“I am a professional vlogger and I had registered my drone on DGCA website and also with the police. Through drone videography I used to show the iconic places of Kashmir due to which I had become a popular vlogger in the region,” said Imad, who started vlogging three years ago.

Imad quit his job in the United Arab Emirates just to become a travel vlogger in Kashmir. His YouTube channel, ‘Imad Clicks’, has 63.3 thousand subscribers.

A north Kashmir-based vlogger, Mir Idrees, was excited to get a drone camera to add drone shots in his videos but all his plans fell through when the government ordered the ban on drone photography. Aerial shots add colour and variety to videos, he argued. “The drone shots of Kashmir’s scenic and far-off places create breathtaking videos and are liked by audiences across the globe. The drone shots are also used in tourism campaigns, prank and musical videos, marriage photography and lifestyle adventure videos. The wide and vast landscapes can only be captured using these aerial cameras.”

When The Wire contacted a senior official from the Srinagar district, he said that the ban is temporary and issued by the government for security reasons. “Reviewing the ban on drones will depend on the security situation,” he added.

Another official from the office of the deputy commissioner, Baramulla, said, “The ban was ordered after a drone attack in Jammu. Currently there is a blanket ban on all type of drones in Baramulla district. However, if anyone approaches our office we may check with the police and help.”

A senior police officer said that drones had been banned in Srinagar, Baramulla, Ganderbal and Bandipora districts in the Kashmir division and Ramban, Samba and Rajouri in the Jammu division. However, he said that drones can be used in other districts by following the respective rules and regulations issued by the concerned district administration. “The order has been issued under Section 144 of the CrPc. As per the order, the decentralised air space access has to be regulated in view of the latest incidents of misuse of drones posing threat to security infrastructure,” he added.

Another police officer in Bandipora district of north Kashmir told The Wire that following the ban, no drone violations were observed anywhere in the district. “We did not have any case or action registered against anyone using or possessing drones,” he said.

District magistrates in J&K had directed those having drone cameras or other similar kinds of unmanned aerial vehicles to deposit them in local police stations.

These orders, however, exempted government departments from using drones for mapping, surveys and surveillance in agricultural, environmental conservation and disaster mitigation sectors, but directed them to inform the local police station before using them.

The administration cautioned that any violation of the guidelines will attract punitive action, and directed the police to implement the restrictions in letter and spirit.

The drone attack on the Indian Air Force station in Jammu triggered a security alert across J&K. One of the blasts had caused minor damage to the roof of a building while the other exploded in an open area.

Since then, a spate of such attacks were reported across J&K, with security agencies blaming Pakistan for launching a new method of “cross-border terrorism”. Of late, security forces said Pakistan-based militants have started using drones from across the Line of Control to smuggle arms, ammunition, drugs and money into Jammu and Kashmir.

Earlier this year, both India and Pakistan had agreed to follow the 2003 truce agreement requiring both countries to cease gunfire along the de-facto border dividing Kashmir.

Quoting sources on July 5, news agency ANI reported that the investigation into the Jammu Air Force station attack case has revealed that drones used in carrying out the blast carried approximately 1.5 kilograms of RDX. “Lashkar-e-Taiba (LeT) or The Resistance Front (TRF) could be behind the drone attack.
The drones were operated through GPS and were handled manually by their handlers,” the ANI report added.

The National Investigation Agency (NIA) is investigating the attack case.

Last month, Inspector-General of Police (IGP) Kashmir, Vijay Kumar termed drones as a “new technical threat” and claimed that all the security agencies have jointly reviewed the situation. “GoC 15 Corps and I along with officials of other security agencies have reviewed the drone threat. It’s a new security challenge and a technical threat. We will deal with it technically. Deployment has been made at vital installations and details of that can’t be shared. All the security installations are on high alert in the Valley,” Kumar said.

Habeel Iqbal, a Kashmiri lawyer and a US State Department fellow, told The Wire that under Section 144, the government cannot restrict people from possessing drones when DGCA rules and regulations are already in place.

Shah Faesal, another lawyer at the J&K high court, added that under Section 144, the government cannot directly ban people from using, possessing and transporting drones, though such orders can be issued when there is a security. “Rather than ordering a complete ban on drones to hit the livelihood of content creators, the government should have asked the professional people to register and submit undertakings with concerned district magistrates.”