The rail line is now likely to miss the latest 2020 target also as the main work on the bridge has stopped.

New Delhi: After missing several deadlines, the Kashmir rail link project is likely to be delayed further as the construction of the Chenab bridge has stopped since October 2018.

Construction work on the main arch for the iconic bridge over the Chenab river in the Katra-Banihal section – which is a part of the flagship Udhampur-Srinagar-Baramulla Rail Link project – has stopped since October 20 due to contractual issues, according to railways sources.

The rail line is now likely to miss the latest 2020 target also as the main work on the bridge has stopped.

The work has stopped over problems involving the anti-rust painting of the main arch and other similar contractual issues, according to people with knowledge of the matter.

In order to prevent rusting, there needs to be a certain type of paint applied to parts of the main arch. This has become a problem as there is a difference of opinion between the Konkan Railway and the contractor on the quality of the painting.

Konkan Railway has been given the responsibility to execute the Kashmir rail link work, which is a national project.

Besides the painting problem, other issues including arbitration have also cropped up between Konkan Railway and contractors which have caused stoppage of the work, thus posing further delays in the project, sources added.

When contacted, Vijay Sharma, the chief administrative officer of the Kashmir rail link project said that the issues may be sorted out soon.

“There were contractual issues because of which work has stopped. A meeting between two parties is slated on December 6 and we are hoping that it would be sorted out,” Sharma said.

The erection of the Chenab bridge has proven to be a challenging task. The main arch in the 1.3-km-long bridge is crucial for the project as it entails carrying heavy segments from two ends of the bridge – the Kauri and Bakkal ends – and involves the world’s longest cable crane arrangement.

Estimated to cost Rs 1,250 crore, the Chenab bridge work started in July 2017 with a target of completing construction by the end of 2019. 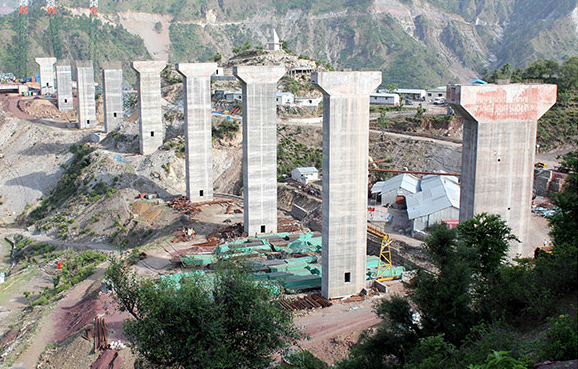 Railway Board Member (Engineering) Vishwesh Choubey, however, maintained that the deadline will be met despite the temporary stoppage of work.

“There are arbitration issues and work has stopped. But we are hopeful of meeting the target,” Choubey said.

The Chenab bridge is located in the Himalayas and comes with extremely complex, fragile and daunting geological features in the form of faults, folds and thrusts. Detailed site-specific seismic analysis have been carried out by IIT, Roorkee and IISc Bangalore.

About two-thirds of the 326 km Jammu-Udhampur-Srinagar-Baramulla rail link is ready. The portion that needs to be completed is a 111 km stretch between Katra, the Hindu pilgrimage town near Jammu, and Banihal on the slopes of Kashmir valley.

Also read: Like the Zojila Tunnel, a Train to Ladakh Is Another Empty Promise

Banihal is connected to Baramulla through Srinagar, while Jammu is linked to Katra through Udhampur. The Katra-Banihal project is considered a tough engineering project as it the construction of 27 bridges, including the tallest rail bridge in the world, and 37 tunnels, one of which is the longest in Asia at more than 12 km.

The Katra-Banihal railway track, which is the only missing link between Jammu-Srinagar-Baramulla railway line, would link Kashmir valley with rest of the country by train.

The cost of the Kashmir rail link project was estimated at Rs 2,500 crore when it was approved in March 1995, it was expected to be completed in 2002.  After missing that deadline, the-then Atal Bihari Vajpayee government had in 2002 declared Jammu-Srinagar rail link as a national project and fixed August 15, 2007 as deadline for its completion.

Since then it has missed several deadlines set by successive governments.