Amid an emerging crisis triggered by a fall in hydel and nuclear power generation, the coal ministry is continuing to discourage imports in an effort to defend its narrative of surplus coal availability. 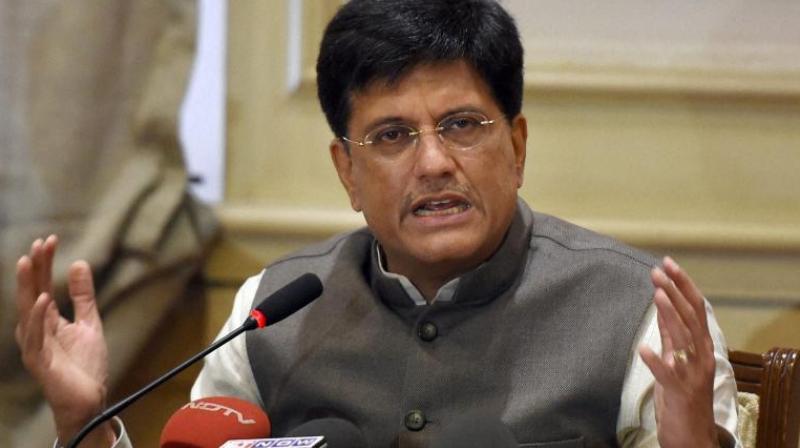 New Delhi: Coal minister Piyush Goyal’s claim two years ago that India will not need to import the dry fuel by 2017 has begun to ring hollow. With power plants battling a severe fuel crisis, the price in the free electricity market has soared above Rs 10 a unit. Fuels stocks of nearly a quarter of country’s coal-based plants have depleted to critically low levels as of October 17, but rather than accept the reality, the coal ministry is assiduously defending the narrative of surplus coal availability and trying to micromanage the situation.

In the absence of any institutional mechanism to deal with such emergency, decision on where coal rakes will go is being dictated by political compulsions. Sources said that every morning, a joint secretary-level official in the coal ministry issues direction to Coal India (CIL) and Singareni Collieries Company (SCCL) regarding how many coal rakes are to be sent to which state.

“We want to completely stop the import of thermal coal in the next two to three years,” Goyal told the maiden Maritime India Summit in April 2015.

“We do not wish to import coal from anywhere in the world. We have sufficient coal capacity in our country,” Goyal – who continues to helm the coal ministry – said as recently as June of this year.

The ministry has put the blame for the ongoing coal crisis on private power companies who did not stock up on supplies before the onset of monsoon. However, the fact remains that the current emergency has been triggered by the precipitous fall in generation at hydel and nuclear plants. Before the power shortage snowballed into a crisis, coal-fired generating stations were battling with low electricity demand. They too were caught unaware by the sudden explosion of power demand.

SCCL too produced 6% less coal than the target set for the six-month period.

The coal ministry says 22% more coal was supplied to the power sector during September, compared to the same period last year. However, the power sector continues to reel under fuel shortage. Power plants in states like Maharashtra and Rajasthan are facing the worst coal shortages.

With electricity demand shooting up due to festive season and coal-fired plants constrained by fuel shortage to step up generation, price in the open power market has spiked. As shedding load during the festive season was not feasible for power distribution companies (discoms), they had no option but to buy costly electricity from the free market. This could further aggravate discoms’s financial problems.

Determined to maintain the narrative of surplus coal availability, the Ministry of Coal (MoC) is discouraging generators from going for imports to meet their fuel shortages, industry sources said.

With the power sector grappling with a severe coal shortage, the credibility of MoC’s monthly reports to the cabinet has come into question. There is a clear divergence between the monthly Central Electricity Authority (CEA) and coal ministry data.

For example, if we go by MoC data, CIL and SCCL together delivered 38.2 million tonne coal to the power sector in August as against 34.78 million tonne supply reported by the CEA.

Similarly, according to MoC records, CIL and SCCL shipped 36 million tonne coal to generating stations, while the CEA has pegged coal supply at 35.64 million tonne.

The MoC held bidding for allocation of linkages for about 27 million tonne of coal in September under the Shakti scheme. However, it has not yet given the necessary letter of assurance to successful bidders and sought extension of 45 days.

Private plants that have signed power purchase agreement but do not have fuel supply pact are eligible to bid for coal linkages under the scheme which was approved by the cabinet in May. Plants have to bid on the basis of discount to the existing PPA tariff.

Most of 30 producing captive coal mines finally allocated by the NDA government through auction route have also failed to make headway, with banks reluctant to lend to these projects for plant and machinery because of poor viability. End coal users put aggressive bids in desperation to bag these projects. Moreover, fear of having to incur crippling royalty payment obligation is holding back successful bidders from production.

Ironically, the government had cited potential accrual of Rs 2.85 lakh crore in royalty payment over 3o years from 34 blocks put up for auction (only 30 finally handed over, the remaining caught in litigation) to concerned states as a major achievement of auction.

The national auditor has picked holes in the e-auction of coal mines under the NDA government, saying multiple bids made by corporate groups through joint ventures or group arms may have limited the competition for 11 coal mines auctioned in the first two rounds in March 2015.

The auction was held after the Supreme Court cancelled allotment of 204 blocks in 2014.

The coal ministry is discouraging generators from going for imports to meet their fuel shortages. Credit: PTI

“In 11 out of 29 coal mines successfully e-auctioned in first and second tranche, a number of qualified bidders (QBs) in the e-auction stage were from the same company/parent-subsidiary company coalition/joint venture (JV). In a scenario where the Standard Tender Document allowed participation of JVs and simultaneously limited the number of QBs which could participate in the e-auction, audit could not draw an assurance that the potential level of competition was achieved during the stage II bidding of these 11 coal mines auctioned in the first two tranches,” the CAG said in its audit report on e-auction of coal mines.

“The roles and responsibilities regarding monitoring of the e-auctioned coal mines were not clear at Coal Controller’s Organisation and monitoring mechanism at the nominated authority was under process of evolution. No mechanism existed to cross check the production figures provided by the prior allottee. There was a mismatch in eight cases between the production quantity submitted by prior allottees to state governments for royalty vis-à-vis submitted to CCO for payment of additional levy,” the CAG observed.

The federal auditor further observed: “There were inconsistencies and inaccuracies in following some of the assumptions and there were various errors in computation of intrinsic values which cumulatively resulted in under determination of upfront amounts, floor prices and revised fixed rates of the coal mines e-auctioned.”

Meanwhile, credit rating agency CRISIL has said that the revival prospect of 21 GW stranded coal-fired capacity remain dim as consolidation process is not picking up due to low growth in electricity demand.

In addition, a large number of plants – adding up to 35 GW capacity – are struggling due to issues such as lack of fuel supply agreement or coal linkage, unviable tariffs due to increase in cost of imported coal, project cost overrun due to delay in commissioning and high receivables due to weak financial condition of procurers, the rating agency noted in a recent update on the sector.