Stepping Into Harm's Way, Civilians Are the New Player in Kashmir's Deadly Encounters

“If government policy changes from killing militants to arresting them, and ends monetary rewards, there will be no such encounters and no protests,” a rights activist says. 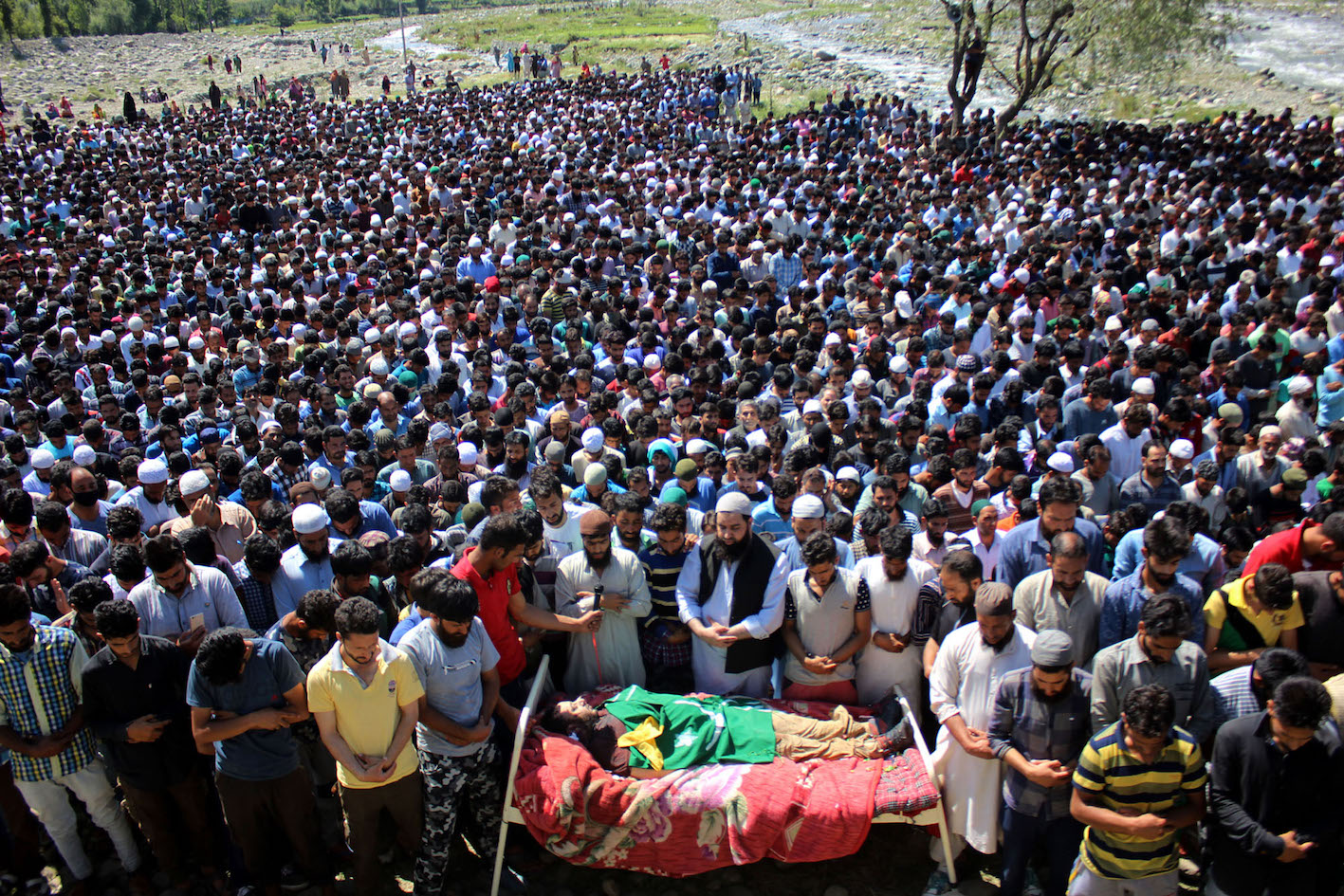 Dialgam (Jammu and Kashmir): Mushtaq Ahmad Bhat knew trouble was imminent when he saw a couple of army jeeps roaming around at dawn in Dialgam village in south Kashmir’s Anantnag district on July 1. He rushed home after offering his morning prayers but soon, the loudspeaker of the local mosque started blaring – asking villagers to come out to help two militants escape the army’s cordon.

One of the trapped militants was the Lashkar-e-Tayyaba’s district commander, Bashir Lashkari, who carried a bounty of Rs 10 lakh on his head. According to the police, he was the architect of the attack that had killed six policemen in June, including a station house officer, in Thajiwara area of Anantnag.

An “A+++” category militant, Lashkari took to arms in 2001. After his arrest, he re-joined the militancy in 2008 and since then has been in the police’s wanted list.

Had all the villagers and those in the adjoining villages come out together on the call of the announcer, Bhat firmly believes, both the militants could have escaped the siege laid by the army, Jammu and Kashmir police and Central Reserve Police Force (CRPF). Instead, only about a dozen men and around 30 women gathered and marched towards the house of Bashir Ahmad Ganai to help the militants flee.

Ganai’s house is isolated, located near an open meadow and orchard, and surrounded by trees. When the villagers neared the house and attempted to enter, “the forces who had discreetly positioned themselves behind the trees started firing indiscriminately,” Bhat said.

Thirty-eight-year old Tahira Begum was part of the crowd. While running towards Ganai’s house, she slapped a soldier who tried to stop her. Feroz Ahmad, who also witnessed the morning incident, recalled that as soon as Tahira tried to open the gate, a bullet hit her back.  She succumbed to her injuries before she could reach Anantnag district hospital.

However, the army’s spokesperson, Colonel Rajesh Kalia contested the claim, saying the woman was killed in cross-fire with the militants inside the house.

Eyewitnesses said that after the firing, the crowd dispersed but over 20 people, including both men and women, managed to enter inside the house. For hours, the, there were no shots fired from the militants or the army.

“People who were inside the house with the two militants did not come out despite the announcements made by the army who threatened to raze the house. The villagers were determined to help the militants escape,” Ahmad said.

But what led the locals to risk their lives in order to save the trapped militants, including Lashkari who killed six policemen last month?

A few days after the encounter, we met up with villagers who witnessed the events unfolding on the morning of July 1. 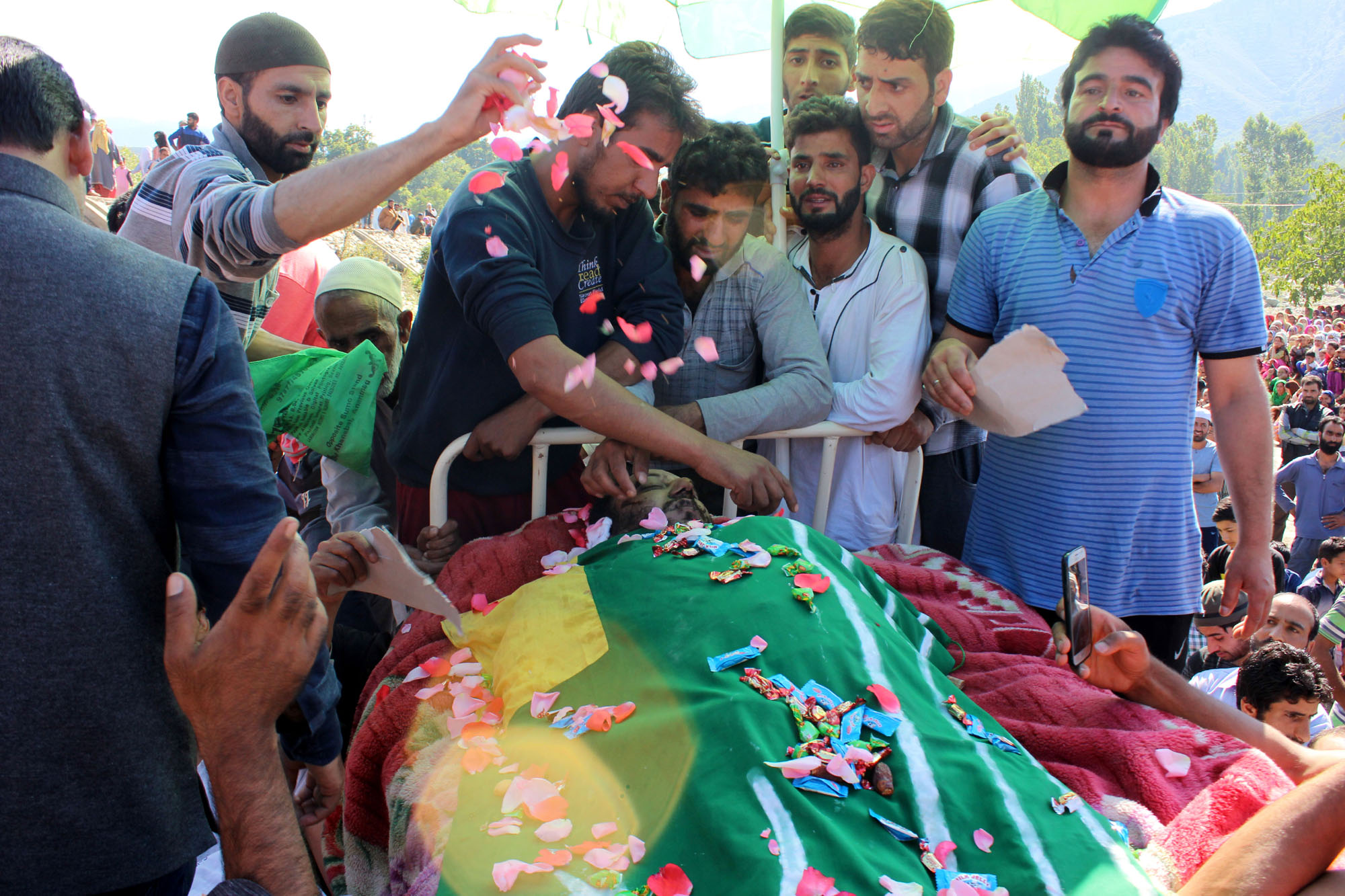 Despite the risk of entering a house that sheltered a most wanted militant and that was cordoned off by the security forces, the locals said they did not think twice about trying to save the men inside. There were two basic reasons: One, many people in the Dialgam village knew Lashkari’s family or his village in Sopshali Kokernag, around 25 kilometres from here; and two, their action, according to some, was about “saving those who fought for the people.”

Abdul Lateef, who is in his thirties, was returning home after Fajr prayers when he learnt about the cordon and the trapped militants. But he did not know Lashkari was also there. A little later, he saw men, women and children marching toward Ganai’s house to take the militants out safely.

When asked why they put their lives at risk to save the militants, Lateef said, “Our purpose is to save these militants who fight for us, for the freedom of Kashmir….In such times, we do not think of anything but saving, at the cost of our lives, these men who happen to be our relatives, neighbours or friends.”

Lateef said that whenever they hear about an encounter in other villages, they try to go and help the militants out. He, like Bhat, is full of remorse that the neighbouring villages were late in coming to the ‘rescue’ on July 1.

Others said it was not for Lashkari specifically that Dialgam residents put their lives at stake. In the first announcement made after the dawn prayers, there was no mention of him, yet people came out in large numbers.

“It does not matter who joins the militancy and where he is from. For us, they are all heroes. If they fight for us, we are always ready to help them when they are in need,” said another villager, who asked to be identified as Shabir Ahmad.

But things took a violent turn when news emerged of Lashkari’s presence. People from adjoining villages came out  and threw stones at the security forces to distract them from the operation.

Mohammad Yaseen also witnessed the events that led to the killing of two militants and civilians. He knew taking such risks could cost him his life. “These militants who are at times employed and educated, fight for us after leaving their homes. Can’t we make any sacrifices for them in return?” Yaseen asked.

Besides, Lashkari’s family and his neighbours were known to many in Dialgam village. Saving him was sort of an obligation for the villagers, many said.

Contrary to what the villagers narrated, a statement from the police later that day alleged that the militants had taken the civilians hostage and used them as human shields to break the security forces cordon.

“The terrorists took 17 civilians including children, women and elderly persons as hostages. The hostages were rescued without any harm after meticulous efforts by the forces,” the statement read.

Nazir Ahmad (name changed), 26, was among those who managed to enter Ganai’s house in the morning. He refuted the police claims that the militants had used the villagers as human shields.

“We went inside on our own and did everything to save the militants but when the army threatened to raze the house, the militants insisted we leave,” Nazir said.

The gun-battle between the forces and militants started around 11:30 in the morning as soon as all the civilians were out of the house. “However, the locals continued their efforts to rescue the militants and engaged in clashes with the forces,” Sajid Chopan, 22, who also received pellet shots in his leg during the clashes, said.

Chopan did not join the locals in the morning to help the militants escape but was part of the protests that erupted after the gun-battle ensued. During these clashes, Chopan saw Shadab Ahmad falling to the bullets of the army.

Shadab was hit in the neck and died before he could reach Sher-e-Kashmir Institute of Medical Sciences (SKIMS) in Srinagar.

Separatist leaders including Syed Ali Geelani, Mirwaiz Umar Farooq and Yasin Malik called for a shutdown across the valley on Sunday to protest the killing of the two civilians.

“The government forces are armed with draconian laws which give them complete impunity to kill the people of Kashmir, especially youth, at will. The brutal use of force on peaceful protesters at Dialgam has once again brought to fore the complete disregard for human lives in Kashmir,” they said in a joint statement.

Lashkari and a Pakistani militant Abu Maz were killed in the encounter.

In Lashkari’s native village in Kokernag, around 20 thousand people gathered to offer funeral prayers. But his body was handed over to the locals only late in the evening. 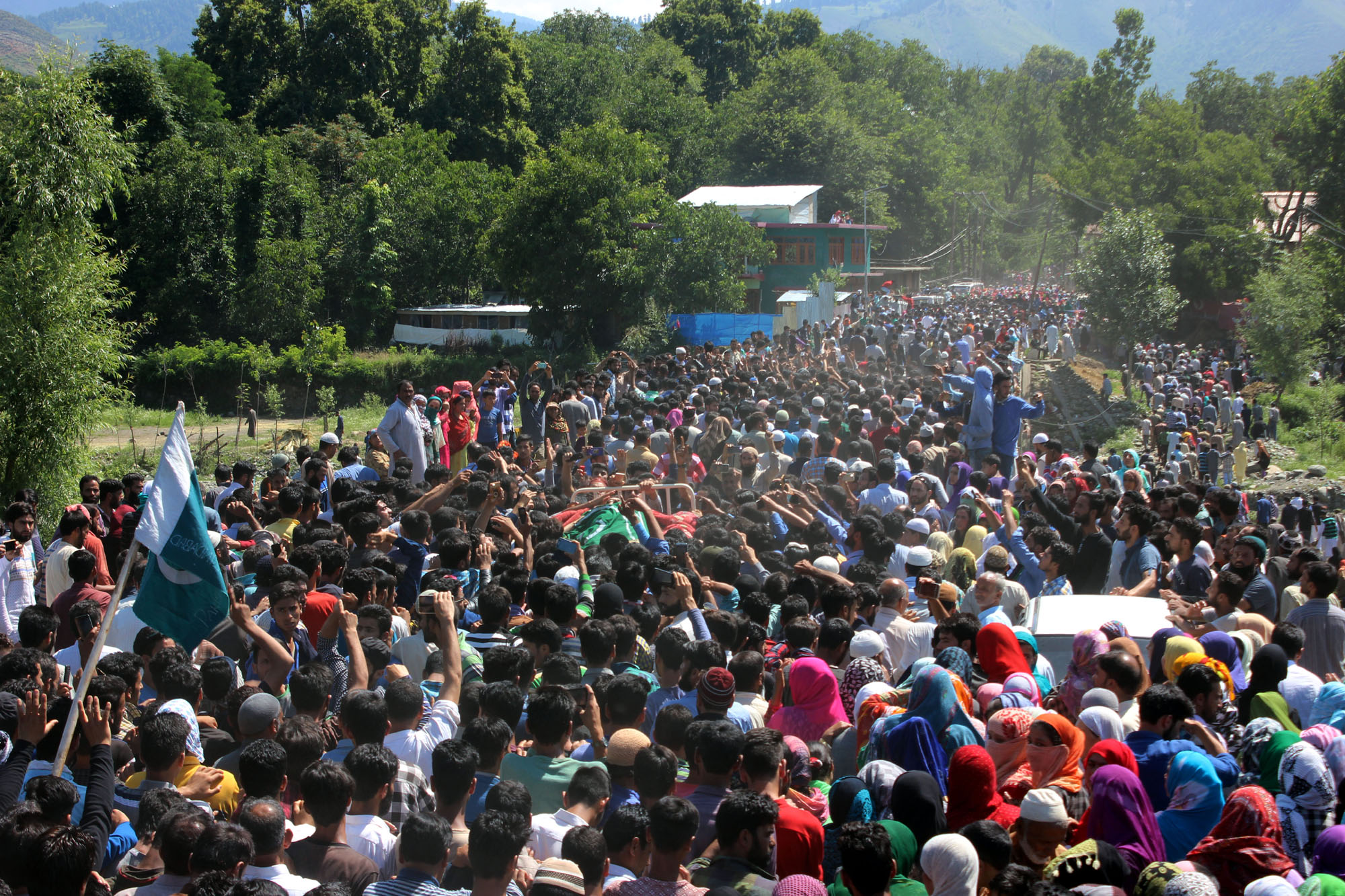 Kashmiri villagers carry the body of Bashir Lashkari, who was killed in a day long gun battle in Dialgam. Credit: Vikar Syed

Apart from the death of two civilians in the encounter, 30 people were injured by pellet and bullet shots. The injured were treated in the district hospital of Anantnag while those with grave injuries were referred to different hospitals in Srinagar.

In the aftermath of Hizbul Mujahideen commander Burhan Wani’s killing in July last year, locals have been coming out in large numbers during gun-battles to help the militants flee. These actions have generated more violence over the months, claiming more than a dozen civilian lives.

This trend poses a tough challenge for the J&K police who have frequently asked civilians to stay away from encounter sites.

Deputy Inspector General of police, south Kashmir, S.P. Pani, said, “We have been often warning people not to go near the encounter sites, but there has been an increase in incidents like these.”

In February, two civilians were killed near an encounter site in Frislan Kulgam in south Kashmir and three civilians were shot dead in Chadoora in central Kashmir when the protesters were trying to disrupt the forces’ operation.

Though the Indian chief of army staff, General Bipin Rawat, had threatened those who obstruct anti-militancy operations and said they would be treated as “over-ground workers of terrorists”, people continue to pour out in support of militants.

The Wire posed two questions to Hurriyat leaders and human rights activists about the new trend:

Jammu and Kashmir Liberation Front (JKLF) chairman Yasin Malik responded by saying the civilian protests at encounter sites were a “reaction to the Indian army’s atrocities.”

“When the army enters our homes on the pretext of searching, they beat men and women alike and even shamelessly post the videos on social media to create fear. What do you expect these people to do?”, Malik asked.

He said people cannot be asked to stop these protests because when the atrocities become unbearable, there is no question of discipline in protests that take place as a reaction.

Khurram Parvez, spokesperson of Jammu and Kashmir Coalation of Civil Societies (JKCCS), said ordinary people in Kashmir consider militants as their own and see the Indian army as an occupational force.

“It is because of this perception that they risk their lives and pour out during encounters to save the lives of their own people,” Parvez said, adding that they also attempt to save property that us usually destroyed during the gun-battles. 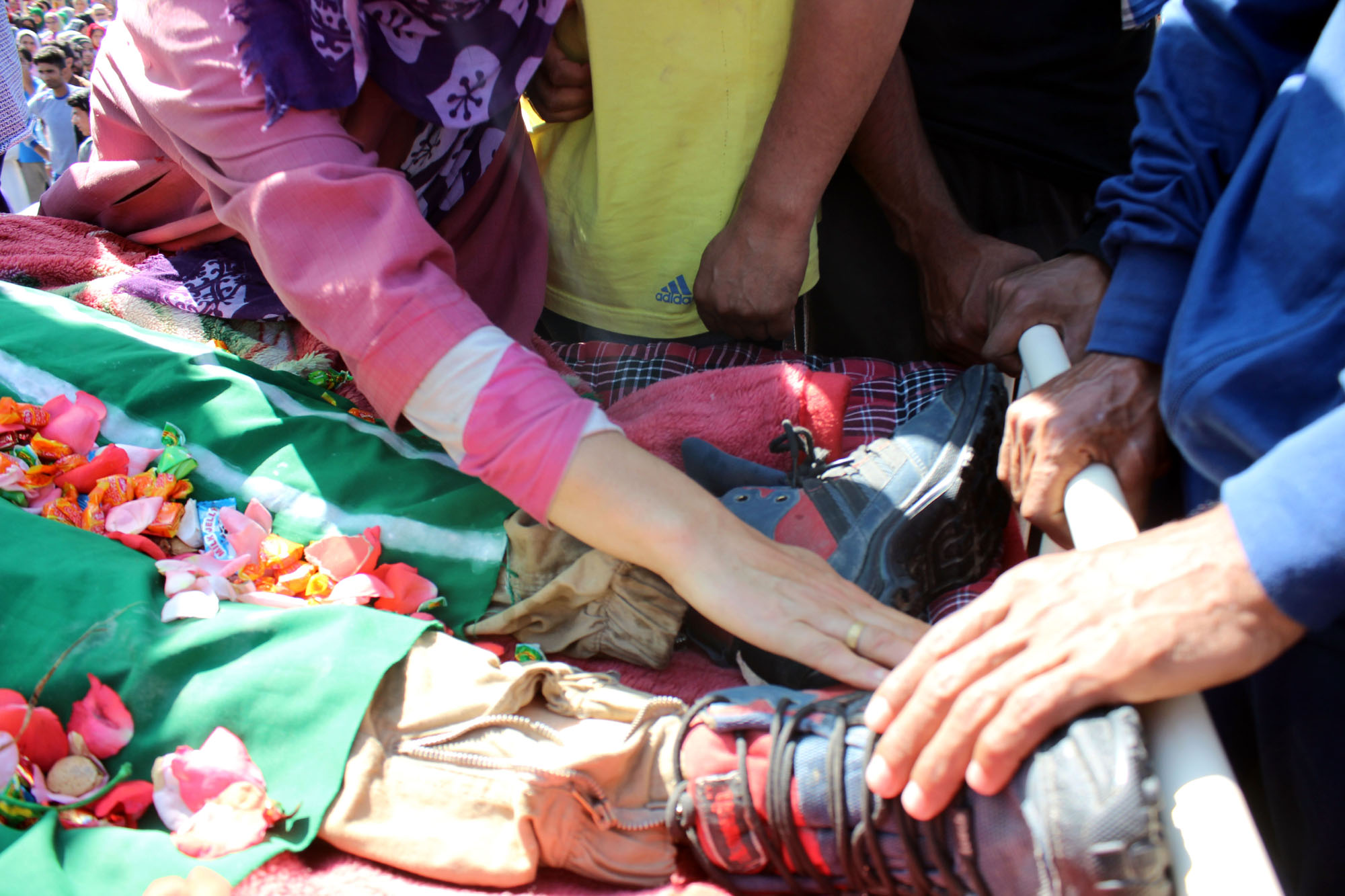 A local woman touches the feet of Bashir Lashkari at his funeral in Sopshali Kokernag. Credit: Vikar Syed

Parvez further said that ideally, the security forces should arrest the militants but they prefer killing them because this means money and perks for the personnel involved.

“If the government changes its policy from killing militants to simply arresting them, and stops its system of monetary rewards, there will be no such encounters and no protests,” Parvez added.

Sheikh Showkat, who teaches law at Central University of Kashmir, said the use of force against the civilian supporters of militants should be avoided.

J&K police’s spokesperson Manoj Pandit declined to comment on the directions the police personnel have been given to contain protests that erupt during encounters. However, a top officer, on condition of anonymity, said, “As the mob gets out of hand, the police is compelled to take extremes measures.”

For young men like Yaseen, however, civilian action of the kind witnessed at Dialgam will continue till the Kashmir conflict is resolved. “It’s not just me who believes so, but all those who support and help the militants,” he said.

Haziq Qadri is an independent journalist based in Srinagar. He tweets at @haziq_qadri