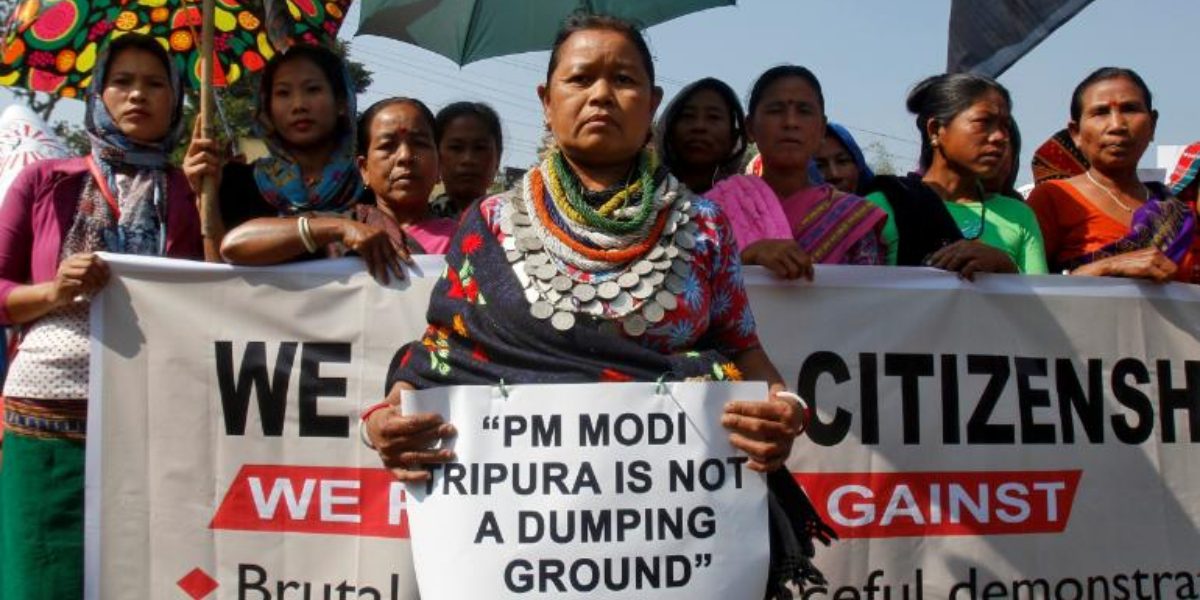 New Delhi: Union home minister Amit Shah will on Monday introduce the Citizenship (Amendment) Bill, which seeks to grant Indian citizenship to non-Muslim refugees from Pakistan, Bangladesh and Afghanistan, in the Lok Sabha.

In the afternoon, the home minister will introduce the Bill to amend the six-decade-old Citizenship Act and later in the day, it will be taken up for discussion and passage, according to the Lok Sabha’s List of Business for Monday.

The Bill has triggered widespread protests in northeastern states with a large section of people and organisations opposing the Bill, saying it will nullify the provisions of the Assam Accord of 1985, which fixed March 24, 1971, as the cut-off date for deportation of all illegal immigrants irrespective of religion.

The influential North East Students’ Organisation (NESO) calling an 11-hour bandh on December 10 in the region.

Members of Hindu, Sikh, Buddhist, Jain, Parsi and Christian communities, who have come from Pakistan, Bangladesh, and Afghanistan, till December 31, 2014, facing religious persecution there will not be treated as illegal immigrants but given Indian citizenship, according to the Citizenship (Amendment) Bill (CAB), 2019.

To assuage feelings of tribals of the Northeast, where many feel that permanent settlement of illegal immigrants will disturb the region’s demography, the government has made provisions under which the Bill will not be applicable in the Inner Line Permit (ILP) regime areas and those tribal regions that are governed under the Sixth Schedule of the Constitution.

“In Citizenship Act, in Section 2 in sub-section (i), in clause (b) the following proviso shall be inserted namely:- “provided that any person belonging to Hindu, Sikh, Buddhist, Jain, Parsi or Christian community from Afghanistan, Bangladesh or Pakistan, who entered into India on or before the 31st day of December 2014 and who has been exempted by the central government by or under clause (c) of sub-section (2) of section 3 of the passport (Entry into India) Act, 1920 or from the application of the provisions of the Foreigners Act 1946 or any rule or order made thereunder shall not be treated as illegal migrants for the purposes of this Act,” the Bill said.

Such refugees will be given Indian citizenship after they have resided in India for five years (six years in CAB 2016), instead of 11 years earlier, it said.

The Bill also proposes to give immunity to such refugees facing legal cases after being found, undocumented migrants.

“On and from the date of commencement of the Citizenship (Amendment) Act, 2019, any proceeding pending against a person under this section in respect of illegal migration or citizenship shall stand abated on conferment of citizenship to him.

The Bill also states: “Provided further that the person who makes the application for citizenship under this section shall not be deprived of his rights and privileges to which he was entitled on the date of receipt of his application on the ground of making such application”.

According to the proposed legislation, the amendment will not be applicable to the tribal areas of Assam, Meghalaya, Mizoram or Tripura as included in the Sixth Schedule to the Constitution and in the areas covered under The Inner Line, notified under the Bengal Eastern Frontier Regulation, 1873.

The ILP regime is applicable in Arunachal Pradesh, Nagaland, and Mizoram.

The Bill also proposes to incorporate a sub-section (d) to Section 7, providing for cancellation of Overseas Citizen of India (OCI) registration where the OCI card-holder has violated any provision of the Citizenship Act or any other law in force.

However, the cancellation order shall not be passed unless the OCI card-holder has been given a reasonable opportunity to be heard. This amendment was also proposed in 2016.

The Bill was an election promise of the BJP in the 2014 and 2019 Lok Sabha polls. It has been criticised as being blatantly anti-Muslim by rights activists from across the country.

The BJP-led NDA government had introduced the Bill in its previous tenure and got the Lok Sabha’s approval. But it did not introduce it in the Rajya Sabha, apparently due to vehement protests in the Northeast.

That Bill lapsed following the dissolution of the last Lok Sabha.