The proposed measures, as per a plan accessed by PTI, include removal of metal items for frisking and mandatory face masks. 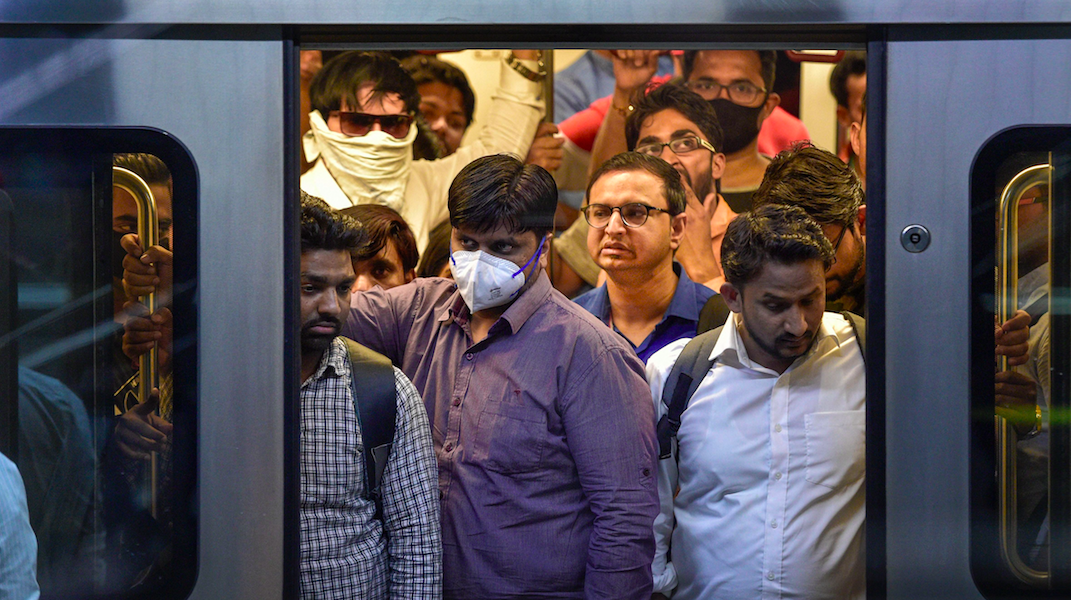 A man in a mask boards the Delhi metro. Photo: PTI

New Delhi: Passengers using the Delhi Metro, post resumption of operations, will have to take out any metallic item on their body before frisking, use face masks, have the ‘Aarogya Setu’ app, but those with flu-like symptoms won’t be allowed, as per a proposal prepared by the CISF on Thursday.

The paramilitary force that guards the network running across the national capital region has formulated a ‘business continuity plan’ for security and safety of passengers and staffers working at the facility.

The proposed measures, as per the plan accessed by PTI, will be implemented by the force “in consultation” with the Delhi Metro Rail Corporation (DMRC) and its controlling ministry of Urban Development.

The plan has been prepared to ensure “public confidence in the ability of the rapid rail network to deliver under any circumstance and to thwart evil designs of disruptive forces to hit the smooth functioning of the network.”

As per the plan envisaged by the force, that deploys about 12,000 men and women personnel to guard over 160 metro stations, the services of the rail network should be resumed in a phased manner.

“Aarogya Setu app with inbuilt e-pass feature could be employed for identification of suspected persons (having COVID-19 infection). Persons with high risks for both spreading as well as contracting infections should be discouraged from using metro,” the plan said.

“All persons entering metro premises will be mandatorily wearing masks. Hand sanitisation or washing facility to be available at the entry points.”

“Thermal screening of all entrants to be conducted at the entry point of stations and those found with abnormal temperatures will not be allowed to enter and persons with cold, cough and other flu like symptoms will be denied entry,” the proposal said.

CISF Director General (DG) Rajesh Ranjan told the news agency that the plan has been prepared keeping in mind that the “speed, safety and security” of the passengers, force personnel, DMRC staffers and others present in the area is ensured.

The force has suggested that all passengers will have to take out metallic items like belts and buckles before frisking and keep them in their bags which will be scanned by an x-ray machine.

Those without bags but carrying metallic items will be provided trays as in the case of airport security, the proposal said.

“Strict distancing norms will be followed throughout the station area and proper queuing area before the security screening point will be maintained,” it said.

The CISF proposes to keep at least two personal protective equipment (PPE) suits at all metro stations “to handle a suspected passenger or baggage.”

“Four PPE suits will be kept as standby. CISF personnel will wear regular uniforms with sleeves fully covered, gloves along with masks covering nose and mouth.”

“Friskers and x-ray baggage screeners should additionally wear face shield or visor to protect their face especially eyes from exposure,” it recommended.

In order to ensure that nefarious elements do not take advantage of the COVID-19 situation to breach the counterterror security cover of the force, it proposes to “intensify electronic and manual surveillance on all activities within the metro premises.”

“Passengers shall be advised through regular announcements to maintain social distancing. Shops and other commercial establishments to ensure social distancing at their locations by means of markings,” it said.

The CISF has also asked the DMRC to deploy adequate staff at paid areas including automated fare collection gates and platforms for maintaining COVID-19 protocols.

“Passengers will be advised regularly to refrain from touching any surface inside the metro stations or trains,” the CISF plan said.

It has also proposed that the entire station area be sanitised with chemicals and security fixtures, equipment and x-ray tables should be sanitised every 30 minutes.

Among all the security forces, the CISF has the largest public interface like at airports and Delhi Metro, a senior official said.

In the post-lockdown scenario, our personnel will come in close contact with large number of commuters daily while performing security duties, especially during security screening of passengers and baggages and hence they would be more exposed and susceptible to the virus, he said.