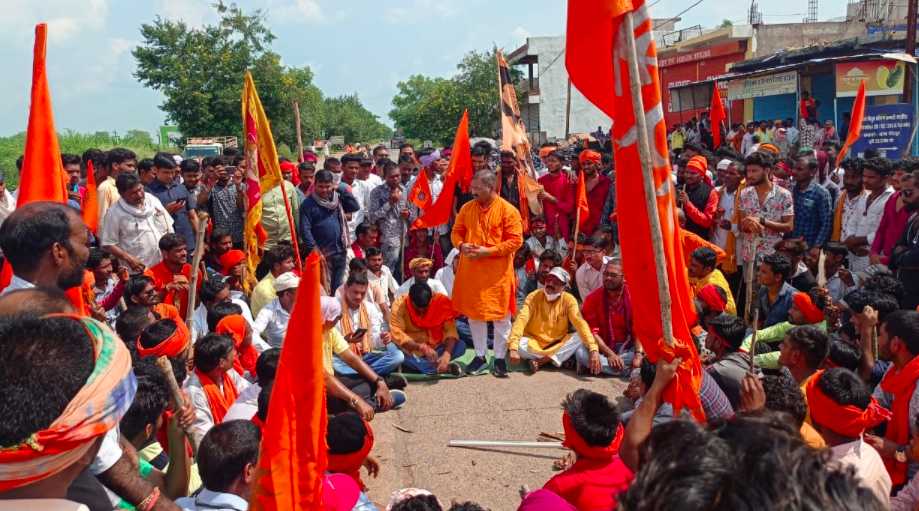 A photograph tweeted by Santosh Pandey from the Kawardha rally. Photo: Twitter/@santoshpandey44

New Delhi: Bharatiya Janata Party MP Santosh Pandey and former party MP Abhishek Singh were on Friday, October 8, booked for rioting and damage to property in connection with the communal violence at Kawardha town of Chhattisgarh, reports have said.

Violence broke out at Kawardha, the headquarters of Kabirdham district, on Tuesday, October 5, during a 3000-people procession taken out by right-wing Hindu outfits defying a curfew. Police had said that no permission was given by the administration for the rally which was taken out two days after a clash broke out between the Hindu and Muslim communities over removal of religious flags from a thoroughfare in the town.

So far 66 people have been arrested, police said.

Pandey and Singh were both reported to have attended the rally on Tuesday. Pandey tweeted photographs from it as well.

Indian Express has reported that participants at the rally raised slogans of “Jai Shri Ram, attacked homes and vehicles owned by Muslims, and pelted the police with stones.” More than a dozen civilians and police personnel were injured in the violence.

Kawardha is located around 126 km from state capital Raipur.

“Based on initial investigation, we have booked both Pandey and Singh for rioting and damage of property along with other leaders of Hindu outfits,” police superintendent Mohit Garg was quoted by Hindustan Times as having said.

Garg told the news outlet that the FIR has not been made public in view of the sensitivity of the matter.

The MP from Rajnandgaon, Pandey was among BJP leaders who accompanied Chhattisgarh Leader of Opposition Dharamlal Kaushik and BJP MLAs Brijmohan Agrawal, Narayan Chandel and Krishnamurti Bandhi to Kawardha town on Wednesday, October 6, during the curfew imposed in the aftermath of the violence.