The Centre's decision to expand the jurisdiction of BSF in various states including Punjab has kicked up a political storm in the state with the chief minister coming under attack "for being complicit" with the Centre on the issue.

Chandigarh: In what appears to be the first major federal opposition to the recent move by the Union ministry of home affairs to increase the jurisdiction of Border Security Force (BSF) in Punjab, Assam and West Bengal, Punjab chief minister Charanjit Singh Channi on Monday, October 18, announced that his government would not accept the Centre’s decision.

He said the current situation demanded assuaging fears from the minds of the public on the sensitive issue to chalk out a well-thought-out strategy for which a special meeting of the state Cabinet would be convened soon.

“If need be, the issue would be thoroughly discussed in an all-party meeting. However, in case the issue is not resolved, a special session of Punjab Vidhan Sabha would be summoned,” said Channi.

Trinamool Congress (TMC) ruling the state of West Bengal has slammed Centre’s October 11 notification that amended the BSF (Border Security Force) Act to authorise the force to undertake search, seizure and arrest within a larger 50 kms stretch, instead of the existing 15 kms, from the international border in Punjab, West Bengal and Assam.

But Channi’s Monday statement is a clear indication that the Congress government in the Punjab government will not merely stop at the level of political positioning.

Channi was recently accused by Shiromani Akali Dal president Sukhbir Badal that Channi was in agreement with the Centre’s decision.

Hitting out at Badal not to misuse sensitive matters for political gains, Channi said his government would take all measures, including a special assembly session, in order to prevent the implementation of the Centre’s notification.

This may also give thrust to the opposition’s allegation against the Modi government has been undermining federalism through the misuse of central agencies.

Channi, who discussed the matter with his cabinet colleagues on Monday, called the Modi government’s move an “authoritarian decision” and the people of Punjab were greatly offended by this “anti-democratic and anti-federal decision”.

He told the media that the Centre was hell-bent on usurping state powers through central agencies. As mentioned earlier, Channi is of the opinion that his government will call for an all-party meeting if not a special assembly session to elicit the views of various parties and send their objections to the Union government.

The chief minister also told the media that since the law-and-order was a state subject, the Centre had no business to thrust its decision on Punjab without taking people of the state into confidence.

He categorically said that his government was fully competent to handle the law-and-order situation across the state with its own police force. He also referred to the capability of the state police force in containing decade-long militancy in the state and restoring long-lasting peace, harmony and brotherhood.

Politics heats up in Punjab

Channi, as many see, is also under pressure to take a strong position against the centre after his own party questioned him over the move.

The initial attack came from former Congress president Sunil Jakhar when he took a dig at the chief minister on Wednesday by tweeting, “Be careful what you ask for! Has (Punjab CM) Charanjit Singh Channi unwittingly managed to hand over half of Punjab to Central govt. 25,000sq km (out of total 50,000sq km) has now been placed under BSF jurisdiction. Punjab Police stands castigated. Do we still want more autonomy from the States?”

As if the comments of the Congress leaders were not sufficient, SAD president Sukhbir Singh Badal too jumped in and accused Channi of being complicit with the Centre on the issue. 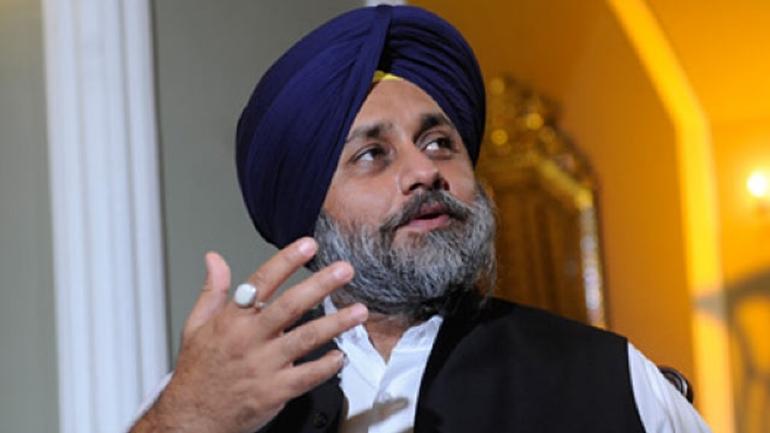 He described the Centre’s decision as being similar to the imposition of the President’s rule through the backdoor in nearly half of Punjab.

“It is most unlikely that the Centre would have taken such a drastic decision without the knowledge and prior consent of the state government and all the noises which Channi and his colleagues are now making are a mere attempt to hide their complicity in this decision,” said Sukhbir.

Channi on Monday urged Badal to desist from making provocative statements, referring to the entry of Central forces to Sri Harmandir Sahib and other religious places.

He also urged the SAD president not to push Punjab into the past where militancy was an issue by hurting religious sentiments of people in the guise of BSF issue, and alleged that Akali Dal was solely responsible for having misled the state’s youth to take up the path of militancy.

Making an oblique reference to Sukhbir for his offensive narrative on this count, Channi said anyone who raked up such sensitive issues merely for pursuing their vested interests was the biggest enemy of Punjab and as well as of the country.

Former Punjab chief minister Amarinder Singh, who recently announced his decision to quit the Congress party after his unceremonious exit as chief minister, has been found to be on the side of the Punjab unit of the BJP when he endorsed the Centre’s decision to increase the jurisdiction of the BSF, quite in contrast to the stand of the Punjab government.

“Our soldiers are being killed in Kashmir. We’re seeing more & more weapons & drugs being pushed by Pakbacked terrorists into Punjab. BSF’s enhanced presence & powers will only make us stronger. Let’s not drag central armed forces into politics,” Amarinder was quoted recently in a tweet by his media adviser Raveen Thukral.

He added, “Partisan considerations can’t & shouldn’t dictate our stand on issues of national security. I’d said that at the time of the 2016 surgical strikes & am saying it again. We’ve to rise above politics when India’s security is at stake, as it is now”.

Amarinder’s tweet did not go down well with his colleagues in the Congress party.  Pargat Singh, now a minister in the Channi government, hit out at Amarinder, saying, “I’ve always said Captain is with BJP only. Earlier he went to Delhi to delay in paddy procurement and now this… If you’re deploying BSF in Punjab, it shows your motive to impose governor rule,” Pargat Singh told media.

This infuriated Captain who then responded by saying, ‘This is the height of irresponsibility from a state minister. You and Navjot Sidhu are clearly birds of the same feather, with nothing better to do than cook up ridiculous stories for cheap publicity.”

Meanwhile, Congress national spokesperson Randeep Surjewala and Amarinder also entered into a verbal spat over the issue after Surejwala asked why Captain did not request for expanding the jurisdiction of BSF when he was a chief minister.

“How ridiculous! You mean I’m dictating @HMOIndia decisions now not just in Punjab but also in Gujarat, WB, Assam, etc? A person who couldn’t win an election in his own state has frankly no right to speak on national issues,” Captain tweeted later.