The CBI under Verma had registered a case of corruption against its No. 2 officer, Rakesh Asthana. Asthana is a Gujarat cadre police officer who is close to Modi. The Supreme Court will hear on October 26 Verma's plea against the decision to send him on leave.

New Delhi:  In a dramatic, overnight decision that underlines just how damaging the corruption case filed by the Central Bureau of Investigation is proving for his government, Prime Minister Narendra Modi has acted to remove director Alok Verma from his post.

Verma and CBI’s second in-charge Rakesh Asthana – who has been accused by the CBI of bribery and extortion – have both been asked to go on leave. A press release from the government noted that the appointments committee of cabinet has asked the agency’s joint director, M. Nageshwar Rao, to hold temporary charge of the CBI.

While initial report said Verma’s offices were sealed and searched, the CBI later issued a statement clarifying that no office in the headquarter was sealed. 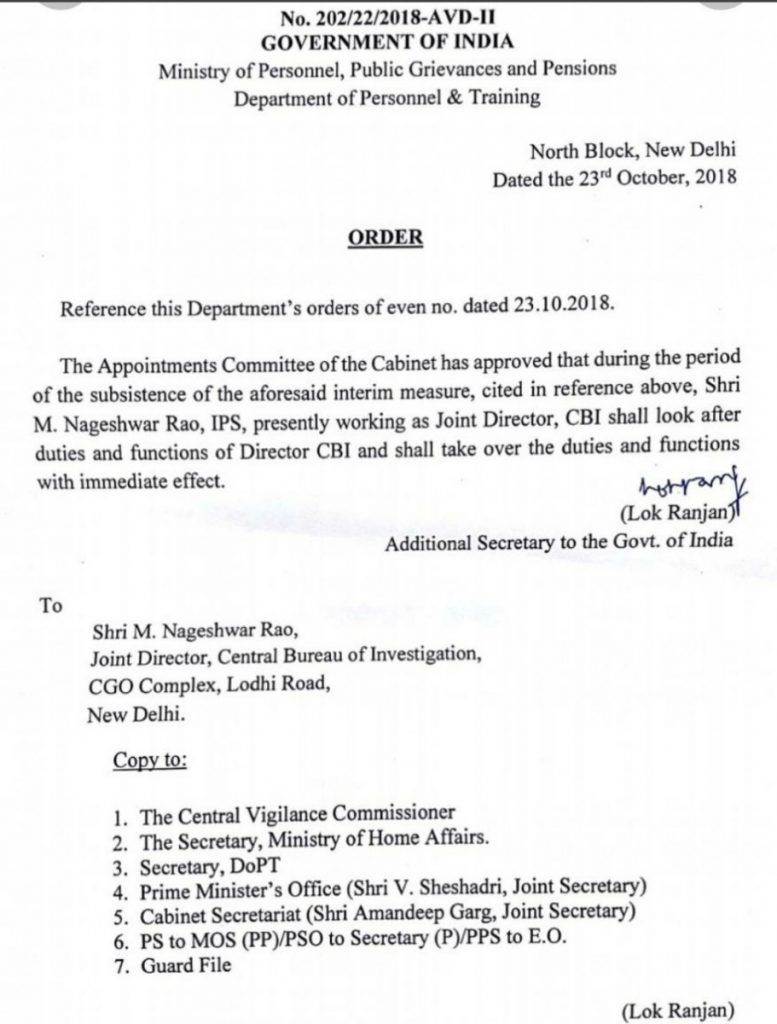 Verma’s ouster has sent shockwaves across the bureaucracy. Unlike most officials in the Centre, he has a fixed tenure of two years and is due to retire only at the end of January 2019. Indeed, the CBI director is meant to enjoy a protected tenure precisely in order to insulate him or her from pressure or interference, and especially a sacking order that may be politically motivated.

Last week, an FIR was registered against special director Asthana, the number 2 man in the CBI, by the agency in a bribery case. Many reports have pointed out that Asthana has always landed plush positions because of his proximity with the top brass in the Narendra Modi government.

The Ministry of Personnel’s notification read, “The Appointments Committee of the Cabinet has approved that during the period of the subsistence of the aforesaid interim measure, cited in reference above, Shri M Nageshwar Rao, IPS, presently working as Joint Director, CBI shall look after duties and functions of Director CBI and shall take over the duties and functions with immediate effect.”

According to PTI, the CBI’s office was sealed in the morning and nobody was allowed to enter the building. The CBI denied this. CBI sources later clarified to The Wire that a contingent of the Delhi police had been deployed in the building to ensure the handover from Verma to Rao took place “smoothly”.

On Monday, reports said the Prime Minister’s Office had summoned both Verma and Asthana – who had earlier accused Verma of taking bribes – on Monday to sort the matter amicably. The tussle between the two top officials has tarnished the image of the agency, the PMO is said to have conveyed to them.

Also read: CBI vs CBI Reflects Rot at the Top of Political Leadership

Asthana was stripped of all his responsibilities at the agency on Tuesday. He approached the Delhi high court on Tuesday, asking the court to quash the FIR against him. The court had asked the agency to to maintain “status quo” until Monday on proceedings. CBI deputy superintendent of police Devendra Kumar had also been arrested for “faslification of records” in connection with the bribery allegations against Asthana.

#NageshwarRao is an IPS officer from Odisha cadre, joined CBI as joint director, promoted to additional director this year. A chemistry post graduate from Osmania University, did his research in Madras IIT, before joining the IPS in 1986. #CBIvCBI @IndianExpress pic.twitter.com/GO4amkNGSG

Senior advocate Prashant Bhushan said the Verma’s removal was “illegal” and that it will be challenged legally.

Breaking! As feared&suspected, the govt has removed the Director CBI from his charge, because he was pursuing corrupt Spl Director Rakesh Asthana who was foisted on CBI by PMO despite his being investigated by the CBI itself in corruption cases.Totally illegal. Will be Challenged pic.twitter.com/KyZgEUBpyF

Bhushan and former Union ministers Arun Shourie and Yashwant Sinha have filed a complaint with the CBI accusing PM Modi of “criminal misconduct” in the renegotiated Rafale deal. Verma met with the trio, which is said to have upset Modi.

The FIR in the case against Asthana had been filed by Hyderabad-based businessman Sathish Babu Sana on October 15. Sana had alleged that Asthana and Devender Kumar had received illegal gratification through private persons Manoj and Somesh Prasad for giving relief in a money laundering case against exporter Moin Qureshi.

SC to hear on Verma’s plea on October 26

The Supreme Court on Wednesday agreed to hear on October 26 the plea of divested CBI Director Alok Kumar Verma challenging the Centre’s decision sending him on leave.

A bench comprising Chief Justice Ranjan Gogoi and Justices S.K. Kaul and K.M. Joseph considered the submission of Verma that his plea against the Centre’s decision to send him on leave required urgent hearing.

The CBI chief has also challenged the decision to appoint joint director M. Nageshwar Rao as head of the probe agency.