Farmers' organisations have been publicly collecting this data, and family members of those who died are pained by the government's indifference. Jalandhar: The Union government may have claimed in parliament that it has no data on farmers’ deaths during the protests, but farmers protesting barely 150 metres away at Jantar Mantar aren’t buying it. The eight-month-long protest reached Jantar Mantar for a ‘Kisan Sansad’ parallel to the monsoon session on Thursday.

Two important developments have taken place in the past few days. First was the announcement of the ‘Kisan Sansad’, a farmer’s parliament being held parallel to the ongoing monsoon session, and second was a “people’s whip” issued by the Samyukt Kisan Morcha (SKM), asking all MPs, irrespective of party, to demand repeal of the three farm laws and a legal guarantee on the minimum support price.

It is because of this people’s whip that on July 20, MPs had sought a reply from Union agriculture minister Narendra Singh Tomar on farmers’ deaths during the agitation. Answering the query, Tomar said that the Union has no record of farmers having died during the protests and there was no proposal to provide compensation to such families.

However, farmers and their families in Punjab know only too well how many have lost their lives so far. As per a press release issued by the SKM, 537 farmers have died in the agitation till date. 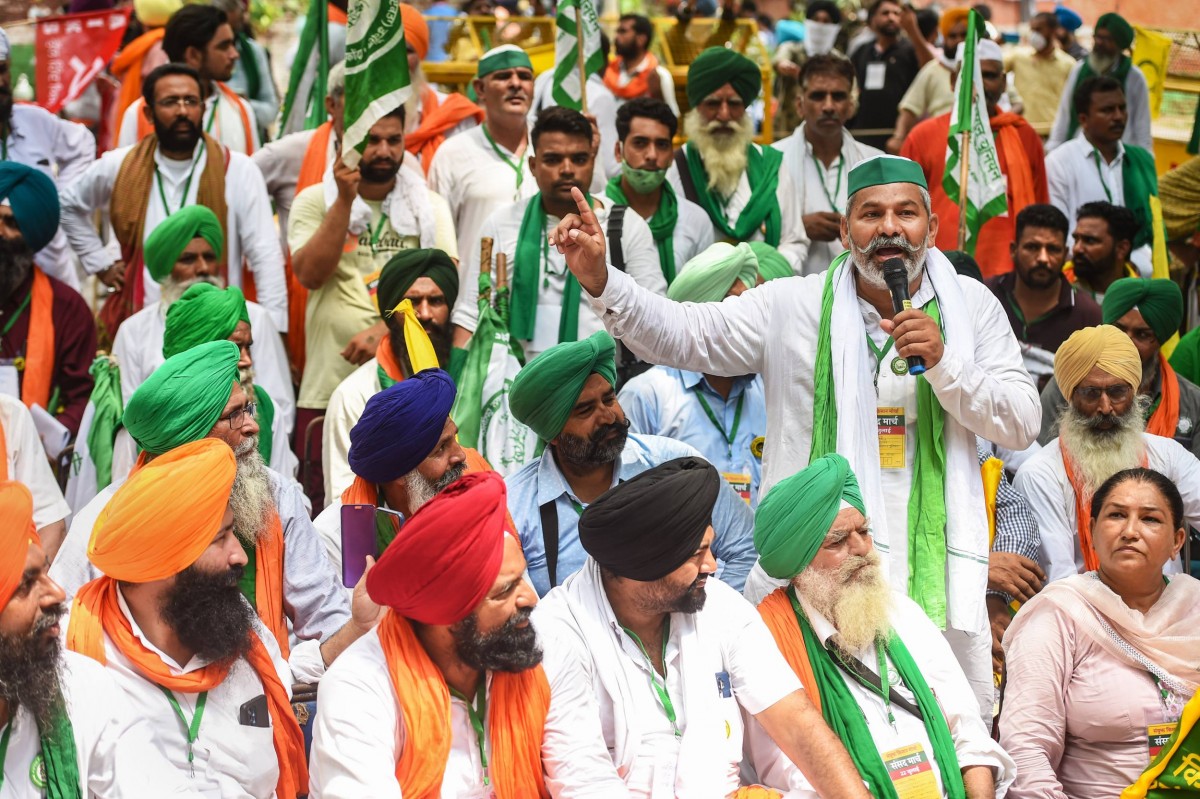 Farmers said that while their comrades died facing extreme cold, heat, rains and accidents in eight months, the government is simply claiming it has no data. “The Kisan Sansad will shed light on these facts,” they said.

To counter the government’s narrative, the SKM also shared details of a blog which carried the list of all farmers who died while protesting since November 24, 2020. The blog is updated bi-weekly.

As per the data shared in the blog, 12 farmers had passed away by October 2020. The blog carries the photographs and details of the farmers who died at Delhi’s Singhu and Tikri borders. A similar memorial page on farmers’ deaths is also available on the Trolley Times website.

Deeply hurt at the Union government’s response, Kulwant Singh from Bhitti Wala village in Sri Muktsar Sahib district, who lost his elder son Bohar Singh (35) in the farmers’ protest at Tikri border, started crying the moment he spoke about his son.

In a chocked voice, Kulwant gave his younger son Dalwinder Singh’s number, who said, “The government knows everything. They have all the records but they just don’t want to acknowledge farmers’ sacrifices and their legitimate protest. If a celebrity dies or a birth takes place at a rich person’s house, the same leaders are the first ones to ensure their presence. But when it comes to farmers, they simply ignore us. We have no hope at all from such a heartless government.”

Also read: Remembering a Peasants’ Movement That Went on For Nearly 50 Years

Another farmer, Gurmit Singh from Barkandi village also in Sri Muktsar Sahib district, said that his only child Yadwinder Singh (23) died in an accident on January 26 while he was coming back from Tikri border.

Anguished at Tomar’s reply in the parliament, Gurmit said, “Laanat hai eho jehi sarkar te (Shame on such a government). They know very well that how many farmers have died but they want to harass us mentally. I lost my only support in my old age. I am devastated. The only tribute to my son’s sacrifice would be repeal of the three farm laws. My son died for the sake of farmers.”

Gurmit owned two acres of agricultural land, out of which he sold one acre for Rs 15 lakh to send his son to Canada and get married. “The women is in Canada now and her family has refused to return my Rs 15 lakh. I have lost everything, my son, land and money.”

Talking to The Wire, Dr Darshan Pal, president of the Krantikari Kisan Union, said that if the Modi government does not know that how many farmers died in the agitation, they can take the data from the SKM. “The government could have deputed some agency to gather the data but all they want is to misguide people. Moreover, what can be expected from a government which blatantly said in the parliament that no death took place due to the lack of oxygen, whereas people died gasping for breath in the COVID-19 second wave?” he said.

On the Kisan Sansad, Pal said that they would largely confine it to the farm laws, MSP, farmers’ suicides and other core issues affecting agriculture in the country. “But we will talk about the Indian government’s role in Pegasus spyware, arrests of activists, COVID-19 deaths and also the price rise of petrol, diesel and essential commodities. We will pass resolutions daily,” he added.

Another senior SKM leader, Jagjit Singh Dallewal, questioned what kind of a government this is if it does not even know how many farmers have died in the protest so far. “We have maintained a record of all the farmers’ deaths in the protests. The SKM will decide and release the data in the Kisan Sansa’, so that the government gets an answer. The government knows the profile of every farm union leader and keeps a watch on our protests, but they don’t have any data of how many farmers died till date. Basically, the government is not for the public but for the corporates like Ambani and Adani, who are calling the shots and Modi is merely following them,” he said.

BKU Doaba president Manjit Singh Rai also took a dig at the Modi government and said it creates data to term farmers as ‘terrorists’, ‘Naxalites’ and ‘anti-nationals’, but doesn’t want to talk about farmers who died in the eight-month-long agitation. “We have maintained an entire record of farmers’ deaths, including their name, village, district and contact details. Through their arrogant and dictatorial attitude, the BJP government is trying to ignore farmers’ existence and protest,” he said.

Rai said that governments can do whatever they want, but the issue is of intention. “Modi government’s intentions have been bad right from day one. By issuing such a statement in the parliament, Tomar has proved his government’s callous attitude towards farmers,” he added. 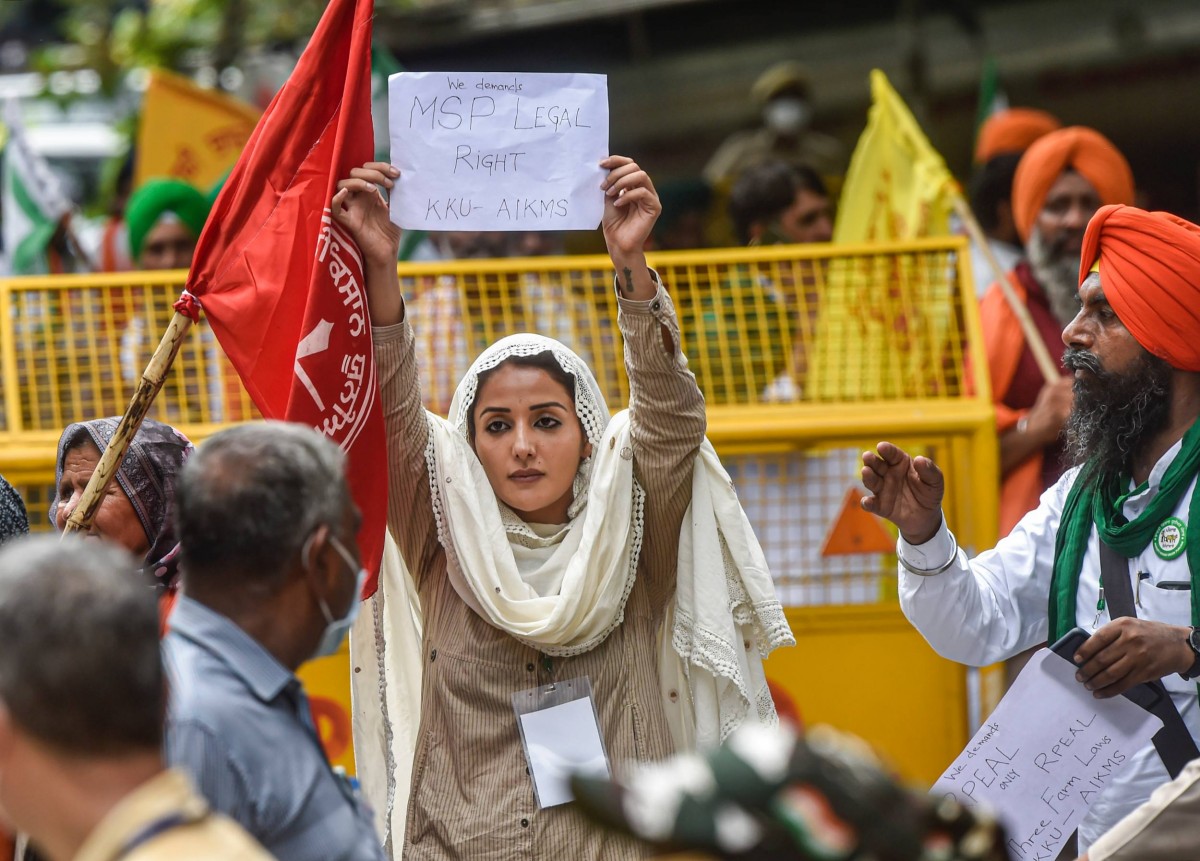 Jasbir Kaur from the Punjab Kisan Union, one of the first women to take part in the Kisan Sansad on Thursday, said that the government has failed completely if it failed to keep a record of farmers’ deaths. “The Modi government is spouting lies after lies. But we will raise our voice against their insensitivity at the Kisan Sansad. The government has been snapping electricity and water connections at protest sites in the peak summer, but such tactics never affected our morale,” she said.

Jasbir has been at the Tikri border for the last eight months and went home for merely three days, when the country was witnessing the deadly second COVID-19 wave.

Ahead of assembly polls, Punjab MPs make their presence felt

Such has been the impact of SKM’s call that SAD president and MP from Ferozepur Sukhbir Singh Badal, his wife and Bathinda MP Harsimrat Kaur Badal and Congress MPs from Punjab have been sharing photos and videos of protest updates from parliament on Twitter. All Punjab parties barring the BJP have agreed to abide by the people’s whip.

Notably, after getting free from paddy transplantation, farmers had also started reaching Singhu, Tikri and Ghazipur borders to further strengthen the agitation. Every day, 200 farmers are coming to Jantar Mantar, while the rest lead the protest at the borders.