Police had opened fire to beat back protesters, killing 13 of them in 2018. This had caused national outrage and the subsequent closure of the Sterlite Copper plan for alleged pollution. 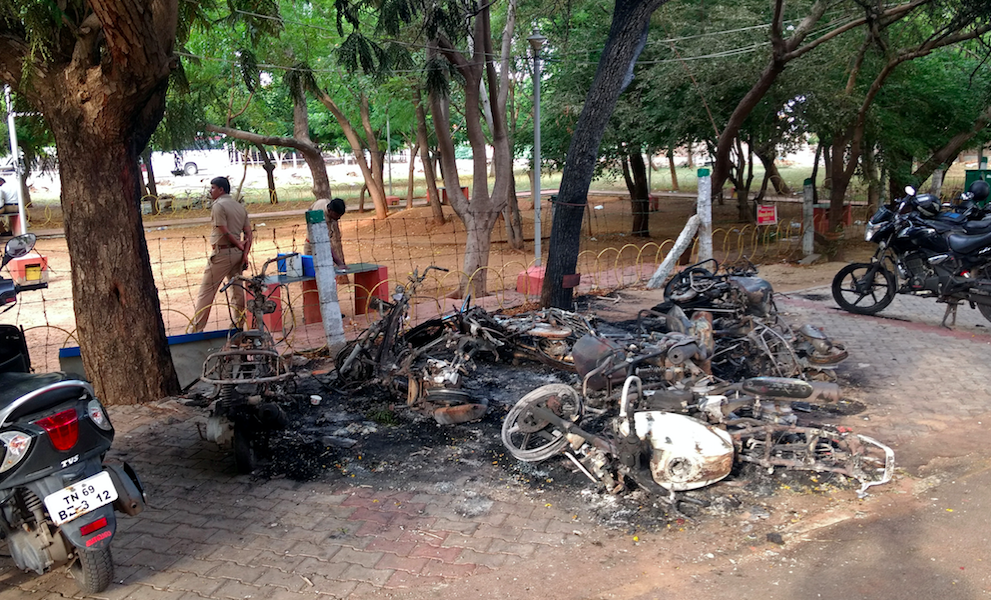 Charred vehicles are pictured near a government office, after at least 13 people were killed when police fired on protesters seeking closure of plant on environmental grounds in town of Thoothukudi in southern state of Tamil Nadu on Tuesday, May 24, 2018. Photo: /Sudarshan Varadhan/File photo

Chennai: The Central Bureau of Investigation (CBI) has charged 71 people for rioting and arson during deadly protests over environmental concerns at Vedanta Ltd’s copper smelter in Tamil Nadu three years ago, sources familiar with the matter told Reuters.

Police opened fire to beat back the protesters in the southern seaside town of Thoothukudi where 13 people were killed, causing national outrage and the subsequent closure of the Sterlite Copper plant in May 2018 for alleged pollution.

The CBI has framed charges on 17 counts including damage to public property and possession of deadly weapons, one of the sources said. These charges carry a maximum penalty of up to seven years in prison.

The charges have not yet been made public. The top law enforcement agency did not respond to a Reuters request for comment. The company in which Indian-born resources magnate Anil Agarwal has a controlling stake, denied it is in breach of environmental laws.

One policeman has also been charged, a second source said, without providing additional details.

Witnesses had said after the incident police opened fire without warning in violation of the police manual, prompting demands from political parties in Tamil Nadu that police officers be held accountable.

The CBI accused “identified and unidentified persons with dishonest common intentions intention of committing riots,” according to the source who has reviewed the document outlining the charges. The accused knew “fully well that they are forming an unlawful assembly and prevented policemen from discharging duty,” the source quoted the CBI as saying in the document.

Deadliest in a decade

Vedanta’s Copper smelter is one of only two major copper smelters in India and it had announced plans to double its capacity, igniting protests from residents and workers worried it would damage the air and water of the town.

The environmental protest was the deadliest in India in a decade. A working group of United Nations’ human rights experts condemned the “apparent excessive and disproportionate use of lethal force by police”.

Twelve of the protesters were killed with shots to the head and chest, autopsy reports later showed. Half of the victims were shot from behind, the post-mortem reports showed, potentially indicating that those shot were not an immediate threat to police. Police have previously said they were overwhelmed and opened fire because they feared the protesters were about to attack people in government offices and apartments housing Vedanta workers.

The CBI said in its charge sheet that the protesters were “armed with deadly weapons, committing mischief using fire and explosive substances, using assault and criminal force to deter public servants from discharging duties,” according to the first source.