The Delhi high court had given the CBI four months to complete the investigation. The deadline is September 30. 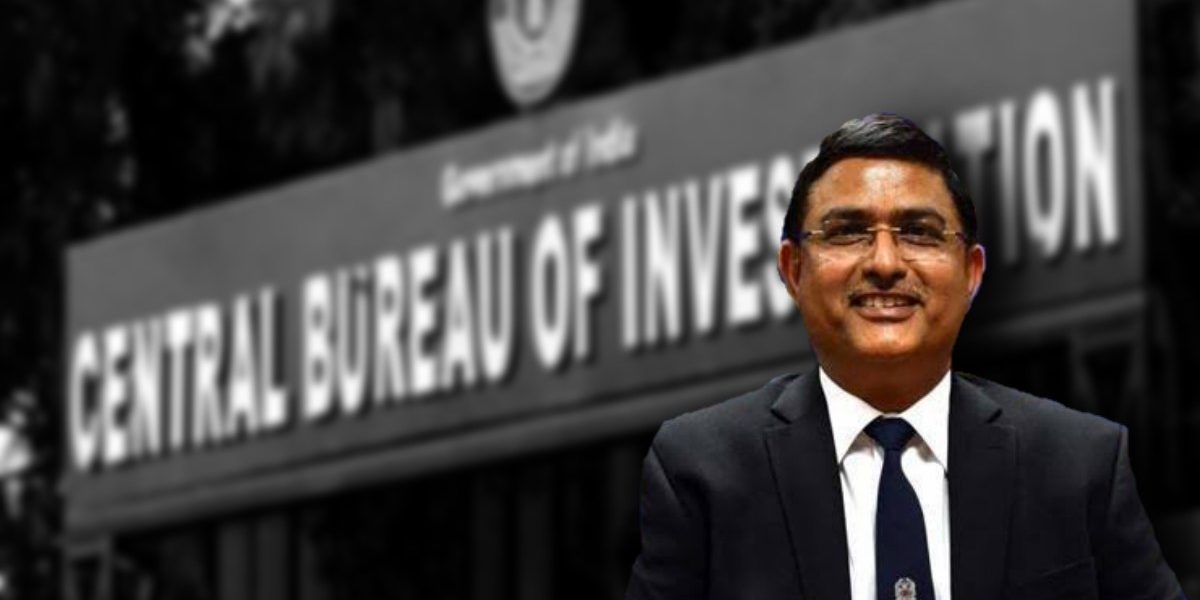 New Delhi: It seems as though the Narendra Modi government is making an all-out effort to save controversial Indian Police Official (IPS) official Rakesh Asthana, as the Delhi high court deadline to complete the bribery investigation against him – September 30 – looms. On May 31, the high court had given the Central Bureau of Investigation (CBI) a four-month deadline.

V. Murugesan, CBI’s joint director, anti-corruption, who was investigating the case against Asthana, will be repatriated to his parent cadre, Uttarakhand. The CBI had sought permission from the Supreme Court to do so in mid August, in a “sealed cover”, and Justice Deepak Gupta’s bench gave the agency permission on Friday.

Murugesan was also handling the coal scam case, which is why the CBI needed the Supreme Court’s permission to send him back to his parent cadre. Murugesan is an IPS official of the 1997 batch.

Interestingly, the superintendent who was the investigation officer in the Asthana case, Satish Dagar, sought voluntary retirement from the CBI last month, on August 19. The CBI sent the retirement request for processing to the Department of Personnel and Training last week.

Displaying unusual alacrity, the government has moved out or changed all four officials handling the Asthana probe. This includes additional director M.N. Rao, who was removed on July 5. 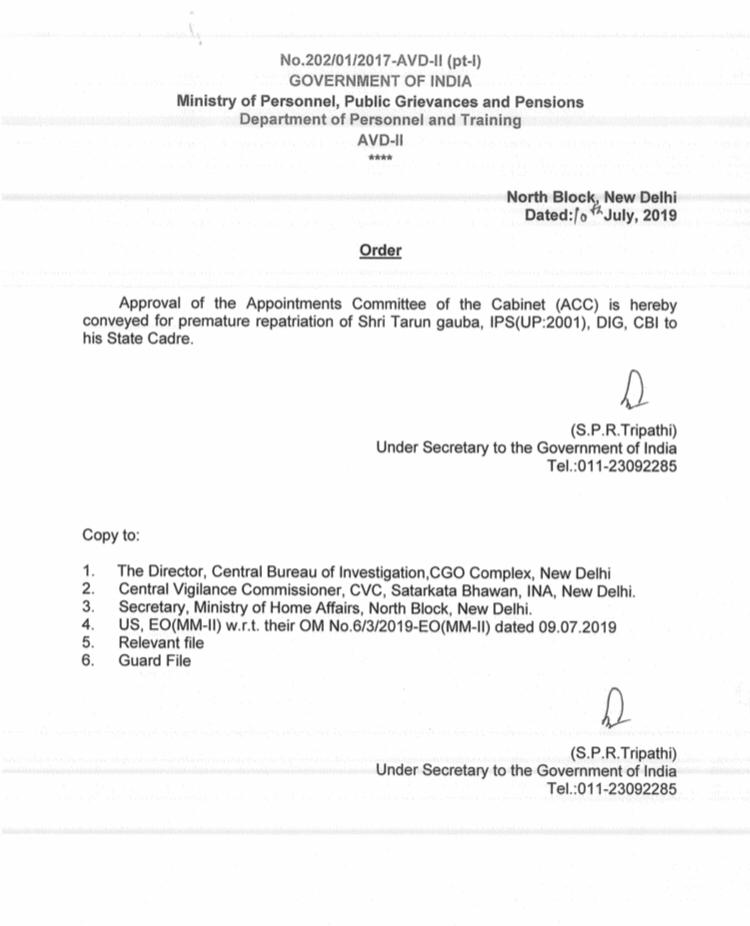 The notice repatriating Tarun Gauba to his parent cadre.

On July 16, DIG Gagandeep Gambhir, a Gujarat cadre IPS official, was given additional charge of the investigation. She was part of the Asthana-constituted special investigation team (SIT) and is believed to be very close to him. A month after she took over the probe, Dagar sought voluntary retirement.

The CBI, on October 15 last year, had registered an FIR against Asthana for allegedly taking a bribe from an accused person he was probing, in return for ensuring relief and a clean chit in the case. Asthana has strongly refuted these allegations.

Then CBI director Alok Verma and his deputy Asthana were sent on leave by the Centre on October 23, as both levelled allegations of corruption against each other. Dagar was brought in to probe the case by M. Nageswar Rao, a 1986-batch Odisha cadre IPS officer, who took over the duties and functions of CBI director on October 23, 2018 in dramatic midnight change in the agency’s leadership made by the Centre.

The case was earlier being probed by superintendent of police A.K. Bassi who was transferred to Port Blair by the CBI.

After taking over on October 23, Rao had overhauled the team probing allegations of corruption against Asthana, bringing in completely new faces.

While Dagar, who had earlier probed cases against Dera Sacha Sauda chief Gurmeet Ram Rahim Singh, was deputed as investigation officer, his first supervisor was DIG Tarun Gauba, who investigated the Vyapam cases. The overall in charge at the joint director-level was V. Murugesan.

Gauba was prematurely repatriated to the cadre recently, as he wanted to attend a course abroad and his CBI term was coming to an end. The fate of the corruption case is crucial for Asthana, a Gujarat cadre IPS of the 1984 batch who is heading the Bureau of Civil Aviation Security and Narcotics Control Bureau, to return to the CBI, where Central Vigilance Commission clearance will be mandatory, sources said.

The case against him was registered on the basis of a complaint from Satish Sana, facing probe in a 2017 case involving meat exporter Moin Qureshi. Sana alleged that the officer had helped him get a clean chit.

The CBI had also arrested Manoj Prasad, believed to be a middleman, when he returned from Dubai on October 16. In July this year, Rao, who was trusted twice by the government to take the reins of the agency when it had removed Verma and Asthana, was suddenly transferred as director-general fire services, civil defence and home guard after the curtailment of his tenure. 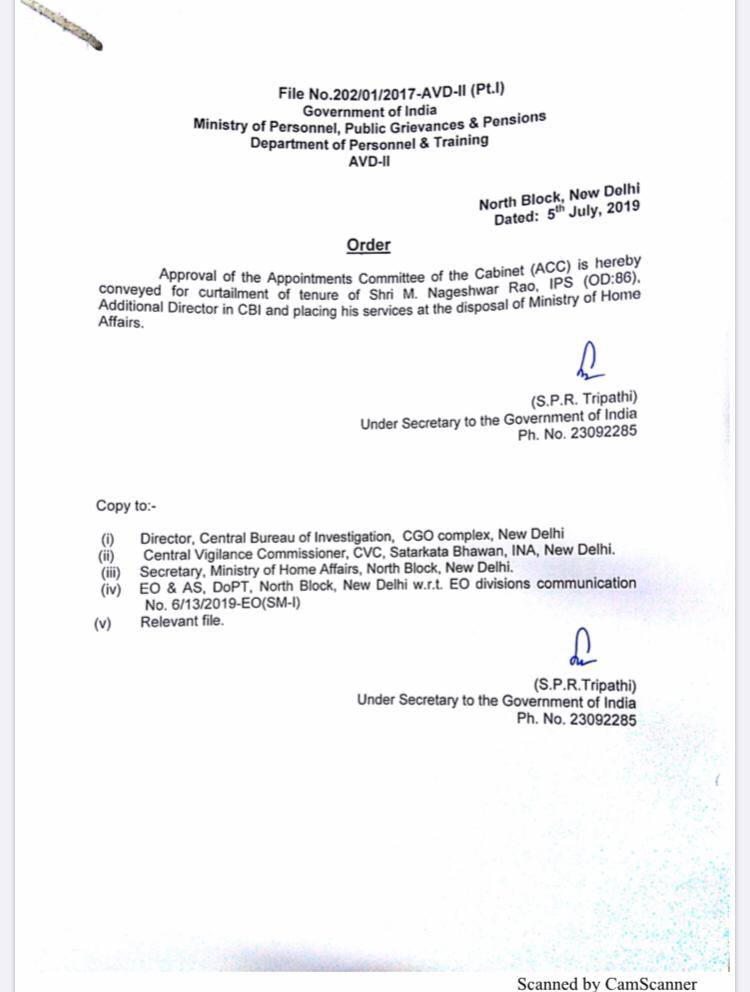 In May, the Delhi high court had granted four more months to the CBI to complete his investigation in the case against Asthana, saying an incomplete probe can lead to termination of proceedings.

On January 11, the court had granted 10 weeks to the probe agency to complete the investigation. The CBI had approached the high court after 10 weeks ended and sought more time. The plea for an extension had been opposed by the counsel for Asthana, Kumar and Prasad.