Officials The Wire spoke to privately admitted that railway junior minister Angadi’s statement to 'shoot protestors' was unwarranted and would only fuel tensions. 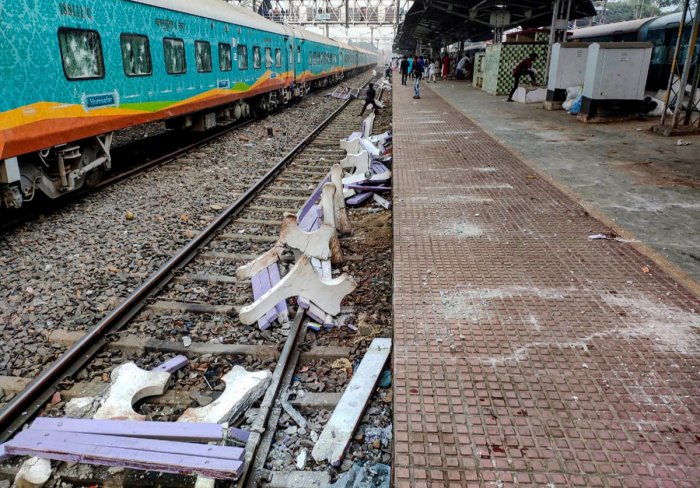 New Delhi Railway property worth over Rs 85 crore was damaged due to the burning of stations, trains and other vehicles during protests over the Citizenship (Amendment) Act (CAA), according to people with knowledge of the matter.

Much of the damage was located to the Eastern, South-Eastern and North frontier zones.

In response, Union minister of state for railways Suresh Angadi controversially stated that protestors who cause damage to the national transporter’s assets should be shot down.

While nobody within the Indian Railways or ministry would provide The Wire with an on-record statement that condemned Angadi’s remarks, many officials admit in private that his statement was unwarranted and would only fuel tensions.

The Congress Party on Wednesday evening, however, lashed out at the situation.

“Whoever minister he is, it is condemnable. Today east to west and north to south it is burning. It is unfortunate,” Congress leader Abhishek Singhvi said at a press conference in Delhi.

Recently, railway services were badly affected in West Bengal and the Northeast regions as a section of protestors blocked railway tracks, ransacked some stations and set fire to various railway tracks, buses and a jeep. A few level-crossings were also damaged, say officials.

Sources say that damage was maximum in the Eastern Zone followed by the South Eastern and North Frontier zones which cover mostly West Bengal, parts of Bihar and the Northeast.

Besides structural damage, scores of train services were cancelled, causing hardship to thousands of passengers for which railway is yet to calculate revenue losses.

While 18 stations including Ulubaeria, Sankrel, Baria, Chengel of the South Eastern zone was damaged, the Eastern Railways suffered maximum losses.

Stations like Sealdah, Beldanga, Lalgola, Krishna Nagar, Malda, Tildanga, Manigram, Lohapur, Deola, Mahipal Road, Sakopar were among more than 20 stations and halts in West Bengal that bore the fury of the mob.

In the North Frontier section, parts of the Harishchandrapur, Katihar and Bhaluka Road stations  were damaged.

Besides this, eight level crossings were also damaged in different sections by the protesters between December 13 and December 15.

“If anyone is destroying railway property, then I ask the chief minister of the particular state to initiate stringent action just as Sardar Vallabhai Patel had taken to merge Hyderabad with India,” he said at Hubballi.

This was in response to questions by reporters who asked him about the steps taken to prevent damage to Railway property due to CAA related protests.

The Railways has rushed about nine companies of RPF to trouble spots while eight RPSF are already being deployed in these affected zones. One company consists of about 100 personnel.

Railway services between West Bengal and Northeast were brought to a complete halt on Monday on account of ongoing agitations. Officials said all trains heading from Howrah, Sealdah and Kolkata stations to north Bengal have also been suspended until further notice, keeping in mind the safety of passengers.

Earlier on Tuesday, as many as 17 Odisha-bound trains were cancelled in view of the ongoing agitation.