The developments assume significance as in the past, several persons with disabilities have suffered humiliation at the hands of security or airlines staff at airports across India. 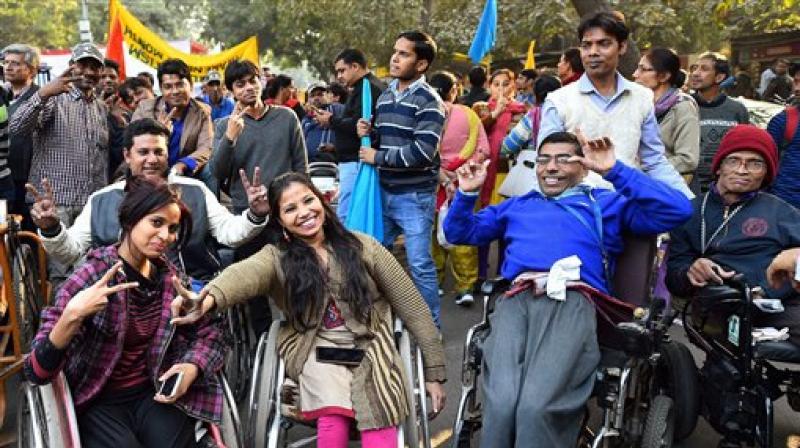 New Delhi: The long fight of disability rights activists for making air travel more friendly and sensitive towards the needs of persons with disability (PwD) appears to have finally borne some fruit.  The Bureau of Civil Aviation and Security (BCAS) has accepted the recommendations of the Central Industrial Security Force (CISF) to use X-ray scanning for prosthetics and orthotics only as a measure of the last resort. Instructions have also been issued to make wheelchair users get up from their chairs only in exceptional cases for security checks.

The decision was made known at a meeting convened by director general of the CISF, O.P. Singh, on October 11, which had representatives of the BCAS, Ministry of Civil Aviation, the Air Passengers Association of India and representatives of the disability sector. The meeting, which lasted close to 90 minutes, was attended by top members of the CISF along with its senior officers deployed at the airports.

Among those present in the meeting were Javed Abidi, director of the National Centre for Promotion of Employment for Disabled People (NCPEDP), cyclist Aditya Mehta, Subhash Chandra Vashishth, Rajesh Bhatia, Nipun Malhotra and associate professor of physiology at the University College of Medical Sciences, Delhi, Satendra Singh.

Instances of humiliation of PwDs

The developments assume significance as in the past, several PwDs have suffered humiliation at the hands of security or airlines staff at airports across India. In 2013, above-knee amputee and marketing professional Suranjana Ghosh Aikara was made to take off her prosthetic leg for a scan at both Delhi and Mumbai airports.

Anjlee Agarwal of the Samarthyam National Centre for Accessible Environments, who suffers from muscular dystrophy, faced two odd situations in early 2012; first, when she was bodily lifted by male porters and the other, when she was carted around on a luggage trolley. Her experience made her seek more dignified travel for PwD travellers..

In 2012, Jeeja Ghosh, a teacher at the Indian Institute for Cerebral Palsy in Kolkata, was made to deplane because the staff found her to be ‘abnormal’. Following her appeal, the Supreme Court constituted a committee and directed the DGCA and the BCAS to consult with disabled section of India’s population.

However, according to Singh, despite directions by the apex court, the BCAS continues to evade this directive. However, Singh lauded the role being played by the CISF, saying it continued to “remain receptive”. Singh also noted that the BCAS had chosen to remain absent from the high-level meeting chaired by the director general of the DGCA with the Airports Authority of India, all the airlines and the disability sector on April 7 this year.

However, Abidi appreciated the change in the approach of both the CISF and the BCAS towards the issue. “There has been a lot of discussion and exchange of notes between the CISF and BCAS of late. It was a well-rounded meeting, almost a closure type, and I was impressed by the seriousness of purpose. It was called to problem-solve and to bring about a change,” he said.

BCAS constituted a panel to look into demands of PwDs

Stating that the CISF has already sent its recommendations to the BCAS and that the latter had constituted a committee which held its meeting a few days ago, Abidi said that the CISF had only invited one user of prosthetics and another from the wheelchair lobby from the diverse disability sector. “So the focus was more on prosthetics and the concerns of the wheelchair users”, he said.

As for other categories of PwDs, he said, they too suffer problems but these are not related to security and need to be handled by the civil aviation ministry and other agencies. “The visually impaired are facing a big problem these days since all the airports have been made sound-free and therefore, the announcement of change of gate for departure of flight is not made through loudspeakers. So a blind person is unable to know that the gate has been changed,” Abidi said.

“Similarly, persons with speech impairment find it difficult to tell their preferences to the airlines staff or about food preference to the air-stewards,” he added.

X-ray to be used as a last resort

Acknowledging that the users of prosthetics, orthotics and wheelchairs remain among the worst affected, Abidi said that the new developments are very positive. “Broadly, it has been decided that in the case of wheelchair users, X-ray should be the last option. The standard practice globally was to profile the passengers, frisk them, make them go through the explosive trace detectors (ETD) if need be and to send their gadgets for X-rays if there was greater suspicion,” he said.

“The world over, X-ray is rarest of rare and in all my travels abroad, even to the US in the post 9/11 era, never have I been asked to get off my wheelchair. However, in Indian airports, it is a norm”, Abidi said. Moreover, he lamented, unlike airports abroad, the CISF personnel have been following the norm of making wheelchair users get off their chairs as part of the security drill. So what is rarest of rare the world over, is their preferred norm here,” he added.

Abidi said the blame should not be placed on the CISF alone. “What should also be remembered is that while the CISF drew the flak, the policies are actually drawn up by the BCAS, which prepares the manual and instructions. So the real change has to occur not with the CISF but with the BCAS.”

The rights activist is hopeful that meaningful changes are being effected. He pointed out how the CISF recently undertook a full training programme for its personnel to sensitise them towards autism. The programme was conducted in association with Merry Barua’s organisation, Action for Autism. “It had sensitised the CISF personnel about the behaviour and concerns of passengers suffering from autism and how they were like to react in different situations“, Abidi said.