The Bose Hologram Showcases Neither Bose nor Technology but Modi

If we're not going to make use of the additional possibilities that holography affords us, why spend so much taxpayer money on it? 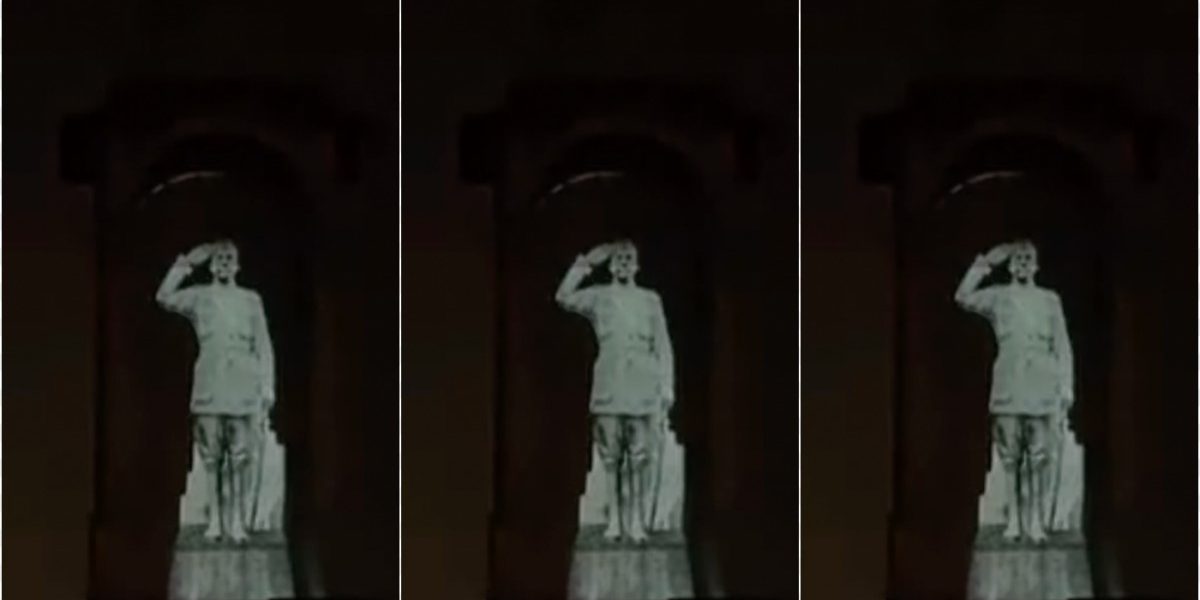 On Sunday, Prime Minister Narendra Modi unveiled a hologram of Subhas Chandra Bose on the occasion of the latter’s 125th birth anniversary, at the spot where a statue for Bose is set to come up, on Rajpath. It seems as if the hologram happened because Modi woke up late to the propaganda value of the anniversary and wanted to be in a Netaji frame anyway, even though the statue wasn’t ready, so his PR team thought up this flashy substitute. And it’s not a good one.

What is the purpose of the holographic object here? Is it a technology demonstration? Doubtful: there’s no innovation here as much as a public installation of a perfected piece of technology. And if there is no purpose other than to allow the prime minister to use the occasion as a conduit to place himself in the limelight, that would be denigrating to Bose, surely.

Nor is it the case that Bose’s statue doesn’t already exist in Delhi (at a fitting location, that too) – though a section of the media has tried to falsely suggest this will be the first time Netaji is going to be honoured with his likeness in the national capital.

According to News18, the hologram of Bose will involve at least one 4K projector – costing “upwards of 15 lakh for one unit” – and a holographic screen to create the image of a saluting Bose. India has had a fraught relationship with technology, more perhaps than even science. The problems with getting hardware to work in India go hand in hand with the flip side of an obsession with frugal engineering.

The ultimate effect is a general unawareness of the processes by which to ensure instruments and machines work as intended. Elevators and tube lights in too many train stations are almost always out of order. Street lights and traffic lights need frequent repairs. Public transport infrastructure constantly tends towards dilapidation. Pass any interstate toll gate and you’re likely to notice one RF-tag reader that isn’t working. Computers in many local government offices are either down or barely online. Even the Aadhaar biometric scanners posed multiple problems when the programme was first rolling out.

Against this backdrop of near-incessant glitches in situations where they really matter for the people, the holographic statue of Bose comes across as much as a symbol of Indian nationalism as a reminder of the ‘high’ level, and expenditure, at which tax-funded technology will work as expected. Specifically, it reinforces the impression of the bathtub-plot nature of functional technology in India: reserved to the very low level/scale, such as light bulbs, auto-rickshaws and gas stoves, and to the very high level/scale, such as smartphones, rockets and metrorails, with a big gap in between.

Also read: How Nehru’s Politics Hobbled Modern India’s Use of Technology for Development

So much for the underlying technology; what about the object itself? The problem here is decidedly one of a hologram’s purpose, especially as it differs from that of a two-dimensional painting or photograph on one hand and a statue on the other.

In 2012, at the famous Coachella music festival in California, the organisers created a three-dimensional spectral form of rapper Tupac Shakur on stage, using a combination of a projector, a reflective screen and a quasi-transparent screen, to have him shout out to the hundred-thousand-strong audience and sing two songs. Tupac was killed in 1996.

Four years later, for the film Rogue One: A Star Wars Story, Industrial Light & Magic used CGI to animate actors Peter Cushing and Carrie Fisher as Grand Moff Tarkin and Princess Leia Organa, respectively. But Cushing had died in 1994; and the Leia Organa onscreen was a young Fisher, as in the first Star Wars film, so effectively a different – and in a manner of speaking no-longer-existent – person. All these instances were criticised for, among other things, refusing to leave the dead in peace.

(CGI is different from holography but in this context they’re easily comparable.)

Resurrection is an unsettling idea, partly because it’s the cause as well as the effect of the cultural significance of death. At the same time, as Thomas Conner argued in a recent PhD dissertation at the University of California, San Diego, holograms also offer new ways to experience the technologically mediated revival of personae. Cushing or Fisher may not have embodied such personae, but Tupac certainly did – as did Bose.

The media-savvy viewing subjects for the Tupac “hologram” were acutely aware that technologies rather than supernatural magic were presenting what they saw and heard, even if they knew little of the details. These holosubjects … interpreted the presence of the dead rapper first by marvelling at the technical mediation but then accepting that the same mediating process … manifests its figure liminally as both alive and dead. Concert became communion—just another mediatized encounter with the archived dead. … [T]he Tupac “hologram” operated neither as a ghost, a man, nor as a purely technical object but as a new personification of a previously existing, historically situated, and mediated liminal entity: the performer persona… “Holograms” allow for these particular spaces of performance to be further mediatized in ways that reopen them to a return of, if not the performers themselves, than at least new elements and echoes of their personae.

Given these new and varied affordances of holography, it’s worth asking why the Indian government has installed a still image of Bose on Rajpath – one that will do nothing more than wow onlookers by being a three-dimensional figure. Imagine, to contrast, being able to see the man walk from side to side, execute a crisp salute or even move his lips to a synced recording. But then Bose’s words – and actual persona – sit awkwardly with the politics of India’s rulers today, so best to leave him mute, they must have reasoned.

However, if we’re not going to make use of the additional possibilities that holography affords us, why spend so much taxpayer money on it when in fact a big photograph of Bose affixed to a rotating pedestal would have done? Tacky is surely better than wasteful; but if you disagree, we could still consider a 3D-printed facsimile made with, say, plastic.

Ultimately, the Bose hologram is neither technology demonstration nor functionally sensible, being nothing more than a power-guzzling glow-in-the-dark stand-in for a forthcoming statue. And unlike Netaji’s statue at Subhash Park at the Red Fort, ordinary Indians may not be able to interact with the hologram either, considering it will be erected on a pedestal in one of the most policed areas in the country.

As such, it will be the perfect symbol of the remoteness and inaccessibility of high technology – and power – for the vast majority.