The boatmen, those running food stalls and the vehicle operators carrying people to and from the ferry ghats fear that from then on they will have to look for an alternative source of livelihood. 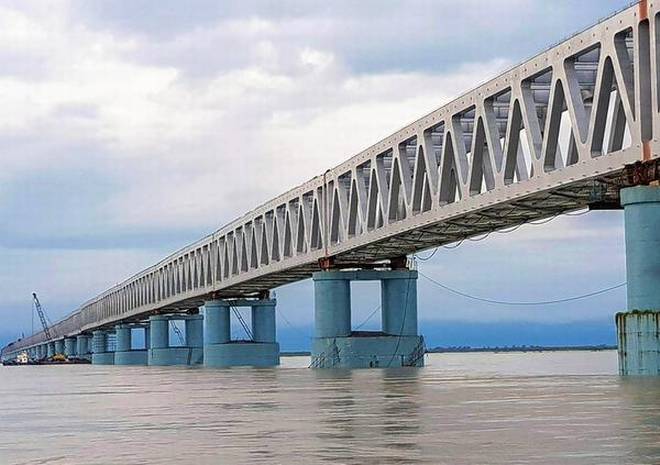 Bogibeel (Assam): A group of boatmen making their living ferrying people and goods across the Brahmaputra see Bogibeel, India’s longest railroad bridge, as a loss of livelihood.

Over 40 boats operate from the north and south banks of the Brahmaputra river, ferrying not just people but also two-wheelers and cars. Of these, two are operated by the state government, while the rest are privately owned.

Come December 25, the rail-cum-road bridge will be inaugurated by Prime Minister Narendra Modi, facilitating quicker movement of vehicles and easy access for the people of Dhemaji to major hospitals, education institutes and the Dibrugarh airport.

The boatmen, those running food stalls and the vehicle operators carrying people to and from the ferry ghats fear that from then on they will have to look for an alternative source of livelihood.

“In a joint family of 12 members, I and my brother operate one boat from Bogibeel ghat. After paying Rs 75,000 rent for the boat per annum and spending on the salaries of the boatmen, we earn around Rs 30,000 per month,” a private ferry operator at Bogibeel ghat said.

It takes 45 minutes to two hours to cross the river on the boats. But once the bridge is open, it will take just 10 minutes, saving not just time, but also money.

While the government-operated boats charge Rs 18 per person, Rs 800 for small cars and Rs 1,000 for SUVs, the privately-operated boats charge way more for ferrying people and vehicles between Bogibeel ghat and Kareng Ghat in Dhemaji district, an official of the state Inland Water Transport Department said.

According to the official, some of the boats will be shifted to other ghats. But the private boat operators fear that they won’t be able to get a similar opportunity and even if they do, it won’t be financially viable.

“After this bridge becomes operational, the ferry service from this ghat will stop and we have to look for an alternative mode of earning. Luckily, we have some agricultural land. But everyone is not so lucky,” said another boat operator.

The bridge, with two-line railway track on the lower deck and a three-lane road on the top deck, will provide the much-needed connectivity between Dibrugarh in Assam to Pasighat in Arunachal Pradesh. It will also reduce Delhi to Dibrugarh train travel time by about three hours to 34 hours as against 37 hours presently.

It is part of infrastructure projects planned by India to improve logistics along the border in Arunachal Pradesh. This includes the construction of a trans-Arunachal highway on the north bank of the Brahmaputra, and new road and rail links over the mighty river and its major tributaries such as the Dibang, Lohit, Subansiri and Kameng.