Seeking to disown Talib Hussain Shah, BJP has claimed that he was planning to kill the party’s top leadership, also blaming the online membership system which allows people from all backgrounds to join the party. 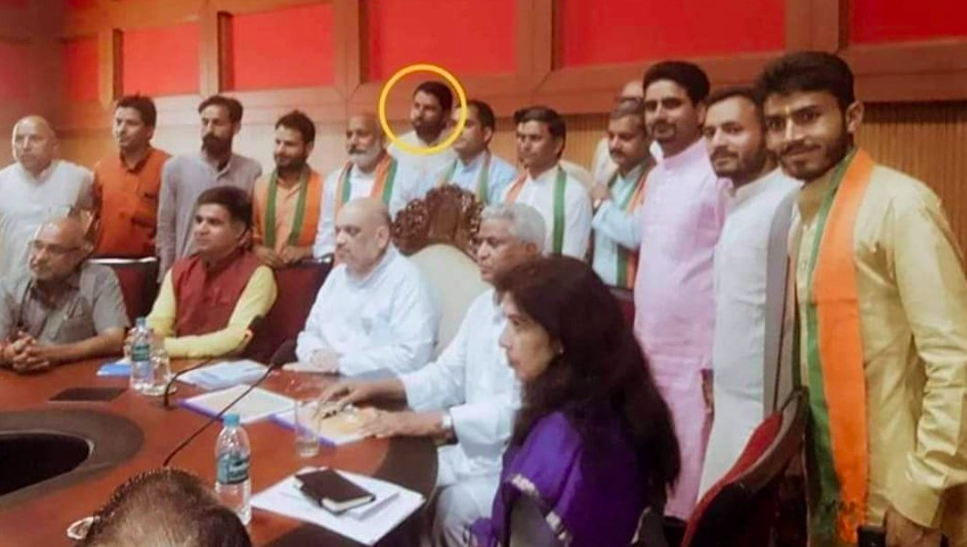 A photo, purportedly of Talib Hussain Shah with BJP brass, circulating on social media. The Wire has not been able to independently verify the image. Photo: Twitter

Srinagar: Talib Hussain Shah, a “wanted terrorist” and “Lashkar-e-Toiba commander”, who was arrested on Sunday, July 3, by Jammu and Kashmir Police, had been appointed in May this year as one of the two in-charges of the J&K Bharatiya Janata Party’s social media wing for minorities.

The order for Talib’s appointment to the key post in the saffron party was issued by Sheikh Bashir, the J&K president of the BJP’s Minority Morcha on May 9.

“Mr Talib Hussain Shah, at Drag, kot Ranka, budhan, District Rajouri, shall be the new IT & Social Media Incharge BJP Minority Morcha Jammu province with immediate effect (sic),” the order, copies of which had been sent to senior BJP leader Ashok Kaul and the national president of its Minority Morcha, states.

Talib’s Facebook profile was taken down following his arrest on Sunday as dozens of photos showing him in the company of BJP’s J&K president Ravinder Raina, Lok Sabha MP from Jammu Jugal Kishore, and other senior J&K leaders and functionaries of the saffron party circulated on social media.

The Wire tried reaching Kaul and Raina for their comments on the development but both ignored repeated phone calls and text messages. This article will be updated if they respond.

Seeking to disown Talib, the BJP claimed that he was planning to kill the party’s top leadership, while blaming the online membership system which allows people from all backgrounds to join the party. “A new issue has come up with this arrest. I’d say this is a new model – entering the BJP, gaining access, doing recce…there was even a plot to kill the top leadership which was busted by the police,” party spokesman R.S. Pathania told NDTV.

Rajinder Gupta, district BJP president of Rajouri, from where Talib hails, told The Tribune that it is possible for anyone from any background to join the BJP. “The party is growing and many people are joining it. We cannot take responsibility for everyone joining the party. However, I do not deny that he may have clicked pictures with some of our senior leaders,” said Gupta.

While the saffron party has claimed that Talib reportedly resigned from the post, the issue is turning into a political row with the opposition Congress blaming the saffron party for “sponsoring terrorism” in Jammu and Kashmir.

The BJP should “explain it to the nation how the dreaded terrorists have been enjoying its patronage by getting important assignments in the party. The main culprit in the sensational Udaipur murder incident, also is the active member of the ruling BJP and now the arrest and identification of LET commander of Peer Panjal range Talib Hussain as senior office bearer of BJP is matter of great concern,” the Congress said in a statement.

Four people were injured in the blasts in Rajouri which have been linked by J&K Police to Talib. He has also been accused of a civilian killing while his role in other terror cases in Rajouri and adjoining districts is being probed, sources said.

According to the police officer, Talib, who had recently been declared as a “wanted terrorist” by the J&K Police, had allegedly collected three consignments of arms, ammunition and explosives from arms smugglers in Lamberi-Kalakote in Nowshehra sector along the Line of Control in Rajouri in January, March and April this year.

Police also claimed that Talib, who has been charged with “growing incidents of militancy in the Pir Panjal Valley”, was “in constant touch with LeT terrorist Qasim based in Pakistan”. Officials said Faisal Ahmad Dar, the second suspected terrorist arrested on Sunday, was in contact with “a Pakistani LeT handler Salman” along with Talib.

A group of locals are believed to have overpowered Talib, a resident of Rajouri district, and his associate, Dar, who lives in south Kashmir’s Pulwama, after becoming suspicious about their activities in a village located in the upper reaches of Reasi district on Sunday.

Talib had taken refuge in the area as a shepherd after his name allegedly cropped up in the investigation of a series of blasts in Rajouri district earlier this year, officials said. “Two AK rifles, seven grenades, one pistol and a huge quantity of ammunition were recovered from their possession,” the police said.

“I salute the bravery of villagers of Tukson Dhok, Reasi, who apprehended two most-wanted terrorists. Such determination by common man shows end of terrorism is not far away. UT Government to extend Rs. 5 Lakh cash reward to villagers for gallant act against terrorists and terrorism,” a Raj Bhawan spokesperson said in a statement.