Sinha was protesting against the government for its alleged apathy towards cotton and soybean cultivators outside the Akola district collector's office. 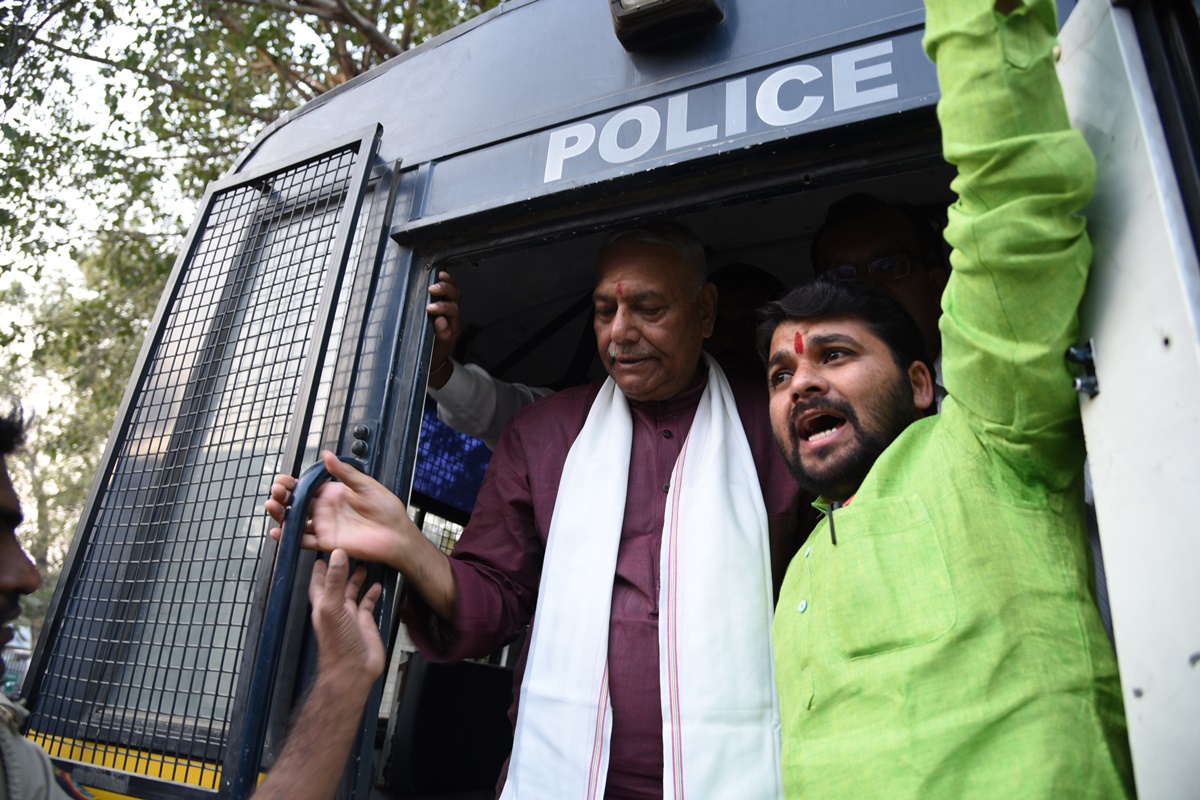 Mumbai: BJP veteran leader Yashwant Sinha was detained by police in Maharashtra’s Akola this evening while protesting against the governments “apathy” towards farmers of the Vidarbha region, a senior official said.

“We detained Sinha and around 250 farmers outside the district collectorate as per provisions of section 68 of the Bombay Police Act,” Akola district Superintendent of Police Rakesh Kalasagar told PTI.

Those detained were taken to the Akola district police headquarters ground, the IPS officer said.

Sinha, along with hundreds of farmers, was protesting against the government for its alleged apathy towards cotton and soybean cultivators outside the Akola district collector’s office.

“We are trying to convince Sinha that the government is sensitive towards farmers’ issues. We have told him that if he wishes, he is free to leave,” district collector Asit Kumar Pandey told PTI.

Pandey said the former Union minister was insisting that FIRs be lodged against bogus Bt cotton companies. The government has already taken strict action and filed FIRs against six such companies, he said.

Speaking to reporters, Sinha said he would stay put even if police allowed him to leave.

“I wish to tell the police, district administration and the state government that if we are formally arrested and released and they think that we will go home, then they are under the wrong impression,” Sinha said.

“You are seeing the mood of farmers now. We won’t be responsible for what happens,” the veteran leader said.

Sinha, who joined the procession of farmers to the district collector’s office to present a memorandum of demands, began the protest march by placing bollworm infected cotton crop at the Mahatma Gandhi statue in Gandhi-Jawahar garden at Akola.

Addressing farmers at a programme called Kapus Soyabean Dhan Parishad (cotton, soyabean and paddy rally), organised by Shetkari Jagar Manch at Akola yesterday, Sinha had accused the BJP of reneging on promises made to farmers.

“Just as Indian soldiers carried out surgical strikes across the border, the farmers will also carry out a surgical strike against the government till justice has been done,” Sinha said.

The Parishad has sought purchase of all farm produce by the government at the minimum support price, Rs 50,000 per acre compensation for cotton farmers affected by pink bollworm disease, besides resolution of issues related to farm insurance and relief to drought-affected villages.

There were reports that Nana Patole, the BJP MP representing Bhandara-Gondia constituency in Vidarbha, attended yesterday’s protest but he kept away.