Bihar Met Officials Issued Warnings About Heavy Rainfall, But No Action Was Taken

Despite having received calls and notifications from the weather department, leaders in state are saying they did not know how bad the floods would be. 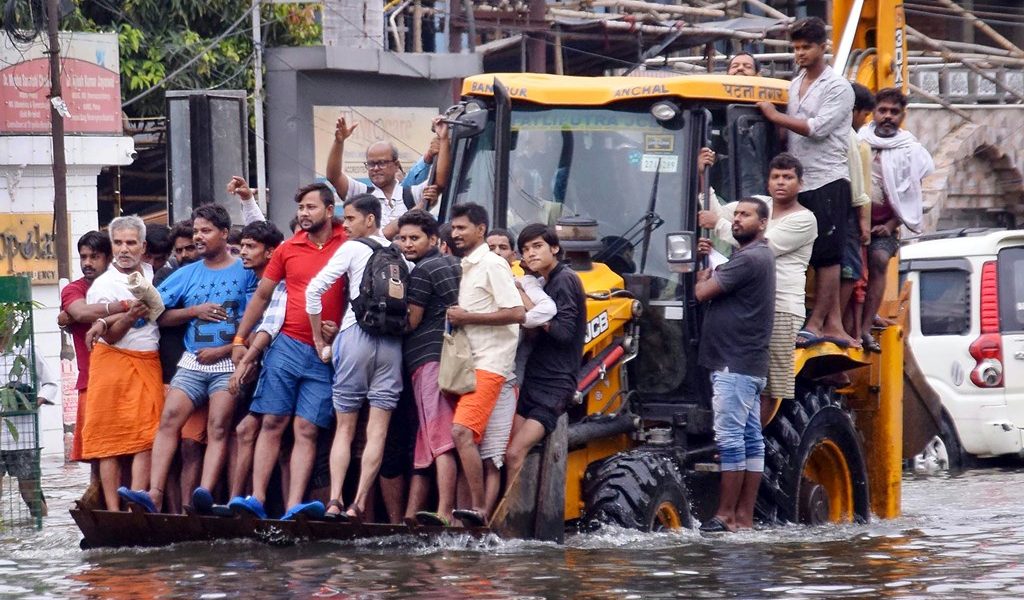 People stranded during the floods being rescued on a JCB in Patna. Photo: PTI

Patna: Angry with those questioning the Bihar government on its handling of the floods, chief minister Nitish Kumar snapped on Tuesday, “Is water in some parts of Patna the only problem we have? What happened in America?” Floods are a natural calamity worsened by climate change, he argued, and his government is doing whatever it can.

A middle-aged rickshaw-puller is stuck in chest-deep water, with his rickshaw swaying as if made of paper. The rain is incessant and the rickshaw-puller is sobbing. His sobs are loud enough to be clearly heard by people in nearby buildings. Hearing him cry, people on the terrace of a building turn emotional and one of them tries to console him. “Don’t cry…please, listen! Leave the rickshaw here and go,” he says. Another woman consoles him saying, “Park (the rickshaw) here, we’ll keep a watch. It is higher here.”

This scene is from a video which is going viral on social media. It has become a representational video of the tragedy that Patna is currently facing. Thousands of people stranded in different areas of Bihar like Rajendra Nagar, Kankarbagh, Saidpur, Bahadurpur and others face a similar situation to the rickshaw-puller.

The ground floors of multi-storeyed buildings are flooded and the residents of upper floors are surrounded by water. Where did thousands of homeless people who slept on footpaths go? No one knows.

Students are stranded. There is an immense shortage of drinking water and food supplies. General stores have run out of stocks. Markets are out of vegetables. If a boat arrives in the area, hundreds of cries emerge for help from every corner.

Sixty-one-year-old Ahmed Ali had been stranded in Rajendra Nagar for three days when he spoke to The Wire. “It started raining on the night of September 27,” he recalls. “Slowly, the water level began rising. People in lower areas have vacated their houses.”

“For three days, there has been no electricity. With no electricity, there is no water. We are managing with water we had saved earlier. Food supplies are over. We managed to get some bread today,” he added.

In Bihar, close to 55 people have died in the floods in the past week.

On Sunday too, instead of explaining how the state government is dealing with the flood situation that has developed in Patna after the rains, Bihar chief minister Nitish Kumar blamed it on climate change. “It has been raining for the past 5-6 days and nothing can be said about how much longer it will continue to rain,” he said.

On September 30, Bihar’s information and public relations minister Neeraj Kumar said, “Untimely and excessive rains have rattled life.” He called this excess rainfall a natural calamity and said there was need for rescue operations.

However, officials of the meteorological centre claim that alerts forecasting heavy rainfall in Patna and other areas were issued beginning September 19. Therefore, it is wrong to say that the rain was unexpected, and that’s why the situation got out of hand.

The regular bulletin and press release issued by the Indian Meteorological Department also shows that the met department was issuing warnings since September 19 that Bihar is going to receive heavy rainfall.

The two-week weather forecast (from September 19 to October 2) released on September 19 by the Indian Meteorological Department clearly stated, “Large parts of eastern India (Odisha, West Bengal, Sikkim, Bihar and Jharkhand) may receive rainfall in the latter part of the first week.”

A cyclonic circulation had formed over Bihar, due to which heavy rains were anticipated.

An official of the meteorological centre (Patna) said, “The bulletin issued by the IMD clearly stated that Bihar will received more than normal rainfall between September 27 and October 3.”

Deputy director of the Patna met centre Anand Shankar said, “On September 26, we got the indication that the rain may make the situation worse, so we started issuing press releases from September 26, in order for the state government to be fully prepared to deal with the situation.”

Shankar further said, “Along with the press release, we were briefing the state agencies through video conferencing since September 26 about heavy rainfall. We have all the bulletins that we sent to the state government. The state government must have them too.”

Addressing a press conference, Nitish Kumar had said on September 29, “Hathiya Nakshatra is at its peak. No one knows when the rain will stop. Even the meteorologists say something in the morning but have to change their opinion in the afternoon.” 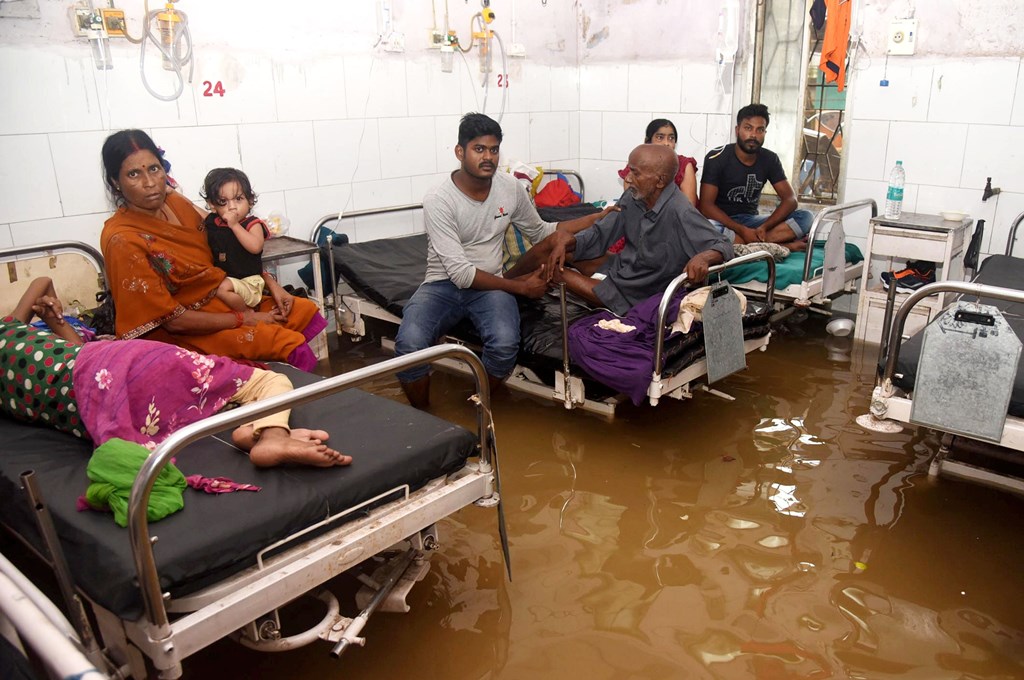 Flooding inside the Nalanda medical college and hospital in Patna. Photo: PTI

How seriously the state government takes the met department’s weather bulletin is clear from the fact that despite the forecast, the Bihar government called the first meeting to discuss the flood situation on September 27. Even then, no discussion on the rain was held.

Sources in the water resources department said that on September 27, an important meeting chaired by Nitish was held, in which officials of the disaster management and water resource departments participated. But there was only a discussion on the forecast of 300 mm rainfall in Nepal. There was no discussion about taking precautionary measures in Patna.

Residents claim that they had received no alert that it would rain so heavily in Patna, otherwise they would have taken safety measures in advance.

Shubham Saurabh, a resident of Bahadurpur, says, “There has been 2.5 feet of water in my room for the past three days. There has been no help from the government. Somehow the women were shifted to a hotel room at Rs 950 (per day). We didn’t know that it would rain so much. Had we been informed earlier, we would have moved to a safer place.”

Water from Patna flows into the Ganga, for which three dozen sump houses have been set up at different places. Water is released into the Ganga through these sump houses, but most of them were out of order.

Meanwhile, the water level in the Ganga had been rising, leading to water entering adjoining areas for the past few weeks. Several roads were submerged but the government neither cared to fix the sump houses nor took the met department’s warning seriously. 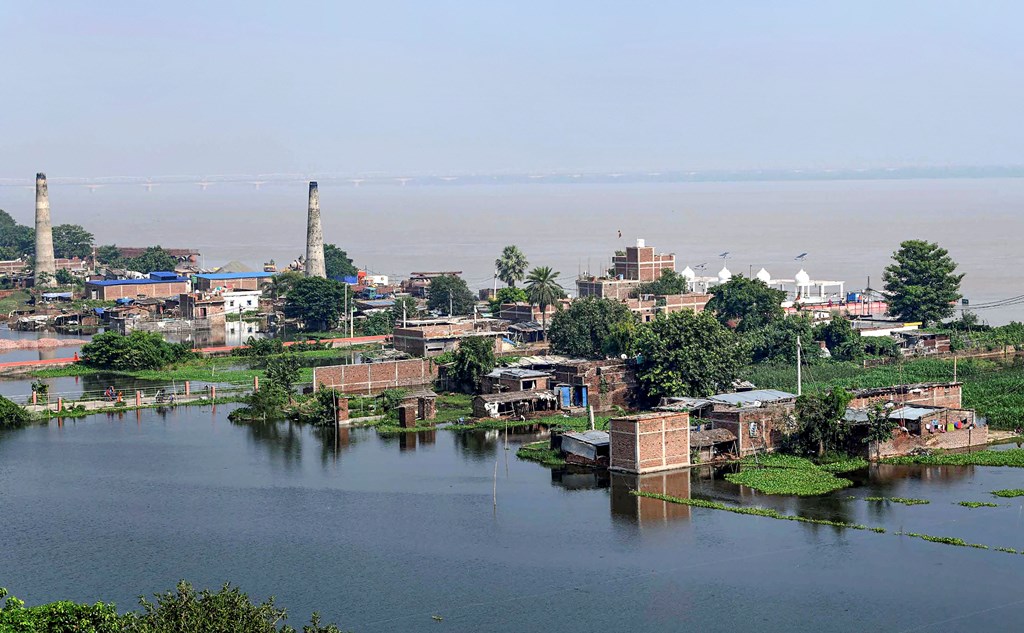 Flooded areas in Patna near the Ganga. Photo: PTI

The administration jumped into action only after the news of the situation in Patna getting out of hand began circulating on social media on the night of September 28. That’s when the administrative officials visited the sump houses and fixed the faulty machines.

The Central government had approved a project of Rs 3,582.41 crore under Namami Gange for waste water management in Patna. Under this project, a 1140.41-km-long pipeline is to be laid which will treat 350 million litres of water.

On October 14, 2017, Prime Minister Narendra Modi inaugurated the project but the pace of work is quite slow.

Experts claim that the project has rendered the old system of water discharge non-functional at various places, which also resulted in waterlogging in Patna.

Also read: The Muzaffarpur Child Deaths Were a Predestined Tragedy

The NDRF and the SDRF have evacuated tens of thousands of people. In areas which are more flooded, there is a plan to bring relief material to people using tractors.

When asked about preparedness to deal with the rain, Bihar’s minister for disaster management Lakshmeswar Rai said, “We were completely prepared but the rain was more than expected which led to this situation.”

He admitted that there was an alert of heavy rains from the met centre but the government did not anticipate that it would rain so much.

More rain than usual in Bihar

The monsoon rainfall in Bihar is generally 1013.3 mm. According to the met centre, there has been 1017.4 mm rainfall till September 30, which is about 4% more than normal.

Though the state government is blaming the flood in Patna on incessant rains, the data refutes this claim. Monsoon rainfall in Patna is usually around 917.2 mm. As of September 29 this year, Patna had received 785.5 mm rainfall.

The monsoon reached Bihar on June 22 this year. In the initial phase, there was less rainfall. Last year, 852 mm rainfall had been recorded in the entire state till September 27, which was 150 mm less than the average. It was feared that the monsoon rains would be less than normal this year too.

Usually, the monsoon recedes from Rajasthan by September 1, but this year it will be late. The effects of this will be seen in Bihar as well.