As of 11 am, the Election Commission has recorded just over 18% voter turnout. A voter gives his thumb impression at a polling booth before casting his vote for the first phase of Bihar Assembly Election, amid the coronavirus pandemic, at Chenari police station in Rohtas district, Wednesday, October 28, 2020. Photo: PTI

Patna: The voter turnout in the phase one of Bihar assembly polls was 52.24% till 5 pm, Chief Election Commissioner Sunil Arora said on Wednesday.

In a break from the past, the CEC attended the poll panel briefing here and made opening remarks.

A total of 71 assembly constituencies of Bihar went for polls on Wednesday in the first phase of three-phase elections amid tight security and with COVID-19 guidelines in place.

The polling began at 7 am and ended at 6 pm.

Of the nearly 2.15 crore electors eligible to exercise the franchise, 1.12 crore are male, 1.01 crore female and 599 are categorised as third gender, according to data provided by the Election Commission.

Union minister and senior BJP leader Giriraj Singh cast his vote at a polling booth in Lakhisarai, while former Bihar chief minister Jitan Ram Manjhi exercised his franchise at a booth in Gaya.

Guidelines have been issued by the Commission for the safe conduct of the electoral exercise in the midst of the raging COVID-19 pandemic.

These guidelines include lowering the maximum number of voters for a polling booth from 1,600 to 1,000, staggering the polling hours and extending postal ballot facility to those above 80.

Besides, sanitisation of electronic voting machines, wearing of masks and other protective gear by polling personnel and the availability of thermal scanner, hand sanitiser, soap and water has also to be ensured at polling stations.

Prime Minister Narendra Modi appealed to people to follow all COVID-19 norms while going to cast their votes.

“I urge all voters to ensure their participation in this festival of democracy taking all COVID-19 related precautions. Keep do gaj ki doori’ (maintain a distance of two yards,) and wear mask mandatorily. Voting first, breakfast later,” he tweeted.

As the polling began, Congress leader Rahul Gandhi urged people to cast their votes in favour of the Mahagathbandhan for “justice, employment and farmers-workers”.

“This time for justice, employment, farmers-workers, your vote should be only for ‘Mahagathbandhan’ (grand alliance),” Gandhi said in a tweet in Hindi.

“Good wishes to all of you on the first phase of Bihar elections,” he tweeted with the hashtag in Hindi ‘Aaj Badlega Bihar’.

It said 31,371 polling stations have been set up in this phase and as many Electronic Voting Machines and Voter-Verifiable Paper Audit Trail (VVPAT) machines will be used.

Additional director general of police (Headquarters) Jitendra Kumar told PTI-Bhasha that paramilitary forces have been deployed in adequate strength at all polling stations and the buildings housing them.

The local police have been used to supplement the paramilitary forces wherever required, he said, adding the services of home guard jawans will also be taken at polling stations for works like maintaining the queue.

He said that as a precautionary measure, all security personnel deployed on poll duty have been given a coronavirus kit which has a face mask, gloves, a face shield and sanitizers. 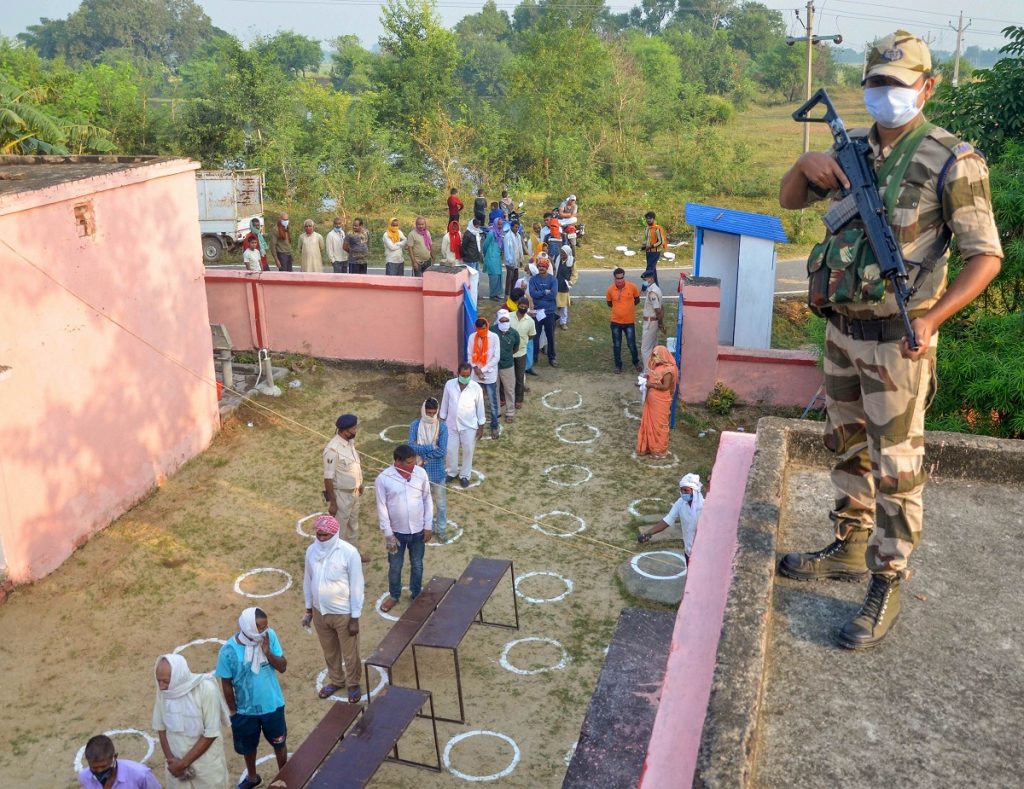 Voters stand in a queue to cast their votes for the first phase of Bihar assembly election at Alipur block in Kaimur district, October 28, 2020. Photo: PTI

He said special security arrangements have been made for the Naxal-affected areas. Most of the state’s Naxal-hit areas are going to polls in the first phase, he said.

The administration will keep an aerial vigil also and one helicopter will be used for the purpose, he said.

Announcing the election schedule for the 243-member assembly on September 25, the Chief Election Commissioner Sunil Arora had said that polls will open as usual at 7 am but the voting hour will be extended by one hour until 6 pm, except in the Left Wing Extremism affected areas, so that COVID-19 patients can vote in the last hour of the day.

“Bihar assembly polls will be one of the biggest elections globally to be held during prevailing COVID-19 situation,” Arora had said.

The second and the third phase of polls are scheduled for November 3 and November 7, respectively. The results will be announced on November 10.