“It seems odd and rather improper for the Centre to first approve Bandyopadhyay’s extension and then recall him within days,” former cabinet secretary B.K. Chaturvedi said.

Kolkata/New Delhi: West Bengal’s chief secretary Alapan Bandyopadhyay retired from his position on Monday afternoon amidst the ongoing tussle between the Centre and the state. He was immediately appointed as the chief minister Mamata Banerjee’s principal advisor for a period of three years.

The dramatic development came after the Department of Personal Training (DoPT) controversially recalled the top officer to be present at the North Block on Monday morning days after it had approved a three-month extension of his tenure.

In view of Bandyopadhyay’s role in the state’s COVID-19 management and an emerging crisis due to the destruction caused by Cyclone Yaas in many districts of Bengal, the Centre had approved the state government’s request to extend Bandyopadhyay tenure, which was scheduled to end on May 31.

However, in an unprecedented move, the DoPT invoked rule 6(1) of IAS (Cadre) Rules, 1954 to recall him to Delhi after Banerjee and Bandyopadhyay skipped a scheduled meeting with Prime Minister Narendra Modi and other Union ministers on May 28 to attend another state government’s meeting. Since then, both the Centre and state have locked horns with each other.

Banerjee had earlier announced that despite the DoPT’s order, the state government would not be releasing Bandyopadhyay. She wrote a five-page letter to the Prime Minister, refusing to comply with the Centre’s order.  “The government of Bengal cannot release, and is not releasing, its Chief Secretary at this critical hour, on the basis of our understanding that the earlier order of extension, issued after lawful consultation in accordance with applicable laws, remains operational and valid,” the letter said.

While appointing Harikrishna Dwiwedi as the new chief secretary on Monday, Banerjee announced that Bandyopadhyay had already submitted his resignation to the Centre and would now take over as her principal advisor.

“This is vendetta. I have never seen such cruel behaviour. Just because they want to attack the Chief Minister, they attack the Chief Secretary. The Centre may not be aware that he has superannuated and his services are not available for the Centre. I have decided we need his service for the Covid pandemic. For Covid and for Cyclone Yaas, he must continue his service to the poor, the state, the country, the affected people…” the chief minister told reporters at the state secretariat.

When asked about whether the Centre was trying to send a strong message to the bureaucracy, Banerjee said, “They (Centre) are suffering from insecurities. A bureaucrat is insulted after he has dedicated his life to his work, what message is the government and PM sending out? They (Centre) think that bureaucrats are bound to do whatever they will be told. Now, there must be an end of tolerance. It is too much. My full solidarity with the bureaucracy. You want to scare the bureaucracy. We are not scared. I am not scared of you. Those who are afraid crumble. We fight and we win.” 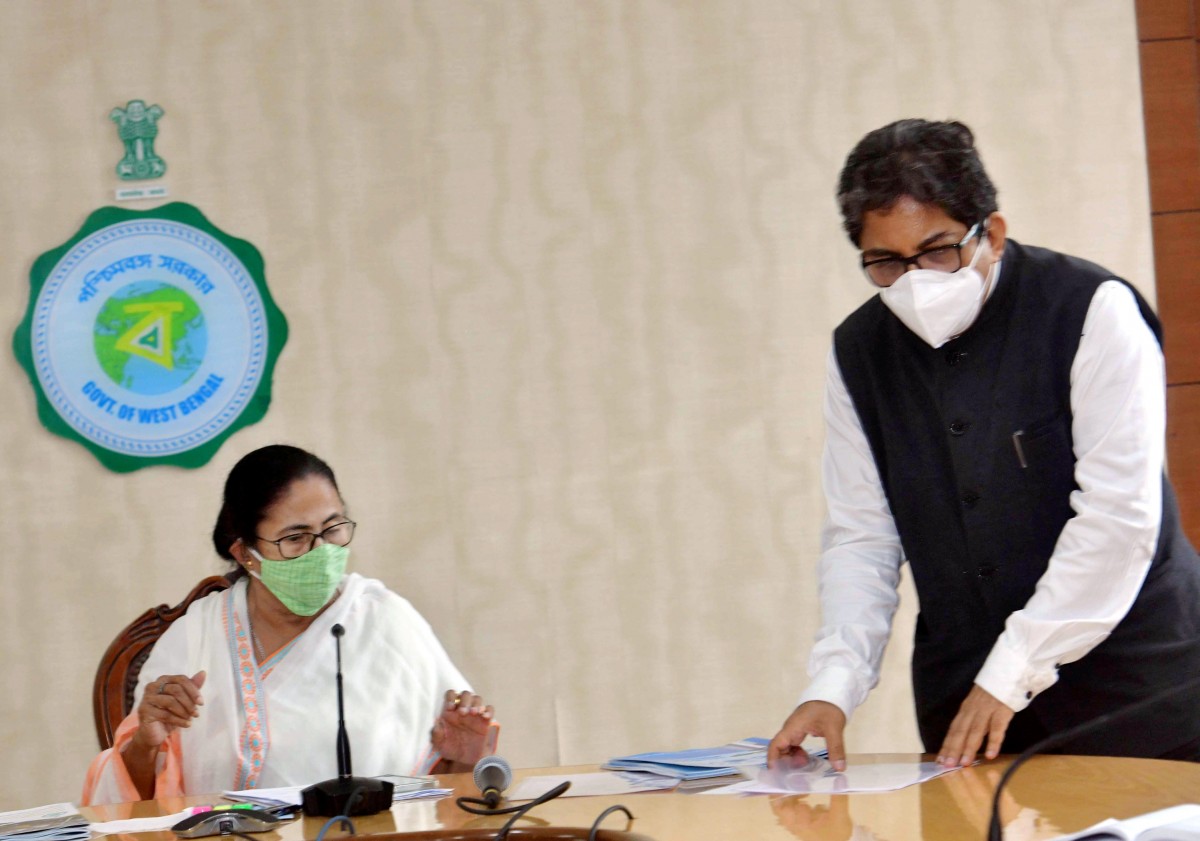 On why she skipped the Cyclone Yass review meeting at West Medinipur’s Kalaikunda with the Prime Minister, the chief minister said that she had already met him and handed over her request for a relief package of Rs 20,000 crore. “I could not stay in the meeting because of the state’s administrative review meeting at Digha,” Banerjee told the media.

Bandyopadhyay who had to retire in such a dramatic situation received massive support from various retired career bureaucrats, who see the Centre’s flip-flop as disastrous for the confidence of Indian bureaucracy.

Speaking to The Wire, former cabinet secretary B.K. Chaturvedi said that although in such cases the Centre’s decision prevails, the rules also make it clear that the Centre cannot make such a move without consulting the state government. “The Government of India is expected to consult the state government – sometimes multiple times – before making such a decision. In this case, it appears that there has been no consultation at all. The Centre’s view will prevail but the consultation process has to be gone through first. That is the most important thing,” he said.

“It seems odd and rather improper for the Centre to first approve Bandyopadhyay’s extension and then recall him within days,” he said. He added that although the Central Administrative Tribunal may uphold the Centre’s view if Bandyopadhyay decided to appeal, the way the Union government went about taking a unilateral decision in this case was “indefensible”.

Former head of Prasar Bharati Jawhar Sircar told The Wire that the May 28 order sent by the Centre was “full of inconsistencies.”

“First of all, it cannot issue a unilateral order on an IAS officer who is not under its control, but under another government within the federation. The second striking feature is that it is really not a posting order because it does not mention to which post the CS of this state has been posted. It is more of an intimation rather than a formal order and it requests the state government to release him,” he said.

“The central government cannot force IAS or IPS officers to join a central posting in Delhi against his will, without either his written ‘option’ or his cadre-controlling authority, the state government, giving him prior clearance to ‘opt’ for the Centre,”  added Sircar.

When asked about what precedent the ongoing controversy sets, Sircar said, “Definitely in the longer term it will have an impact on bureaucracy. But moreover, it’s an exercise with a combination of absolute arrogance and stupidity. The Centre’s position had no base.”

Former Planning Commission member N.C. Saxena told The Wire that the Centre’s unilateral decision was a reflection of growing authoritarianism and centralisation in India. “On the face of it, the decision looks vindictive. There were no consultations at all,” he said.

“Our country is facing a crisis in the sense that authoritarianism, majoritarianism, and centralisation is growing in this regime. Earlier, officers sought out vacancies in the Government of India. Being at the Centre was considered better than serving states. But now, all of that is gradually changing because there is an environment of fear in New Delhi.” 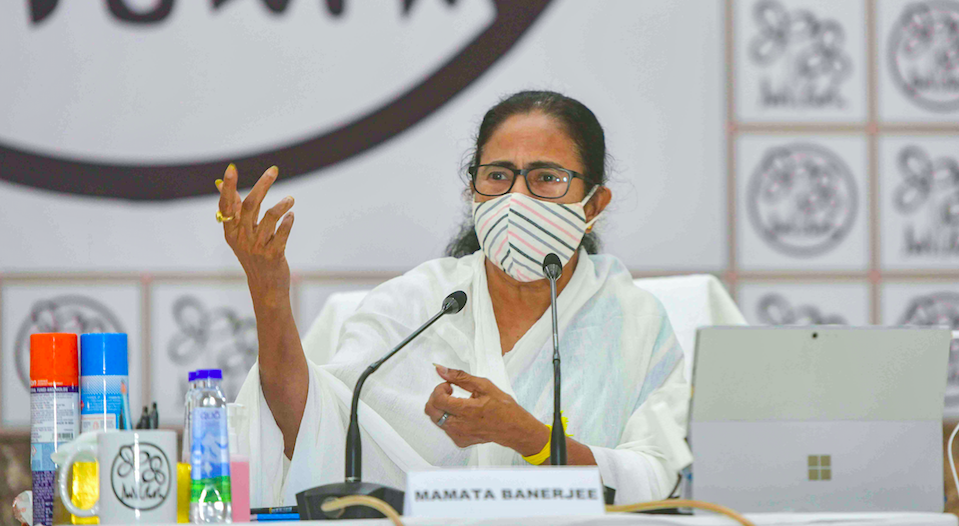 “Whatever be the circumstances underlying the Centre’s order,” former Union revenue secretay E.A.S. Sarma said, “to transfer the senior-most civil servant of the State at a time like this, when the State is facing the brunt of Covid and the aftermath of the recent cyclone, raises questions on justification for such an abrupt decision.”
In a letter to the prime minister, Sarma wrote:
“Technically speaking, the IAS (Cadre) Rules no doubt empower the Centre to recall IAS officers from the State but such a recall should be based on justifiable grounds and for upholding the public interest. Even while taking such a decision, the Centre is required to hold prior consultation with the State and, in the event of disagreement, the Centre should cite the extraordinary circumstances that justify such a recall. From what I gather from the news reports available, it appears that the Centre has taken the decision in a unilateral and summary manner. If it is so, the order issued by the Centre will not stand the test of legality.”

Speaking to a regional news channel, Ardhendu Sen, former chief secretary of West Bengal singled out the lack of any reason for the Centre’s decision to recall Bandyopadhyay, hinting at possible political vindictiveness. “I heard the Centre has served a notice to Alapan Bandhopadhyay to explain why he didn’t report to Delhi on May 31. However, none of the letters that Centre has sent to the chief secretary has any explanation on why he was recalled to Delhi. I agree with the CM’s decision on appointing him as the chief advisor, the state administration can use his experience at these trying times.”

On the question of further escalation and legal battle, Sen said, “I don’t think there will be any legal problems. He will be joining  as a state government’s advisor, which is completely under state’s jurisdiction. No one has locus standi here.”

However, It is unlikely that the controversy will end soon. NDTV reported central government sources as saying that Bandyopadhyay may soon face action for defying the Centre’s orders. The Centre has been attempting to tighten the noose around the state government ever since the ruling party BJP emerged as the primary opposition in the state. Its attacks have increased manifold ever since it lost the recent assembly elections by a huge margin.

Although cornering the chief secretary has caught a great deal of attention, the Centre had taken similar action against other bureaucrats in the run-up to the assembly elections. On December 12, the Union home ministry recalled three IPS officers – Superintendent of police (SP) of Diamond Harbour, Bholanath Pandey, additional director general of police (ADGP) of South Bengal, Rajeev Mishra, and deputy inspector general of police (DIG), Presidency Range, Praveen Tripathi – for central deputation from West Bengal. It had then held the three IPS officers responsible for the alleged security lapses during the BJP president J.P. Nadda’s rally in Bengal’s South 24 Parganas district. The Banerjee administration had even then refused to release any of the three IPS officers. However, the Centre did not pursue the matter.