In Naxal-dominated areas, the Swachh Bharat Mission – like all other government schemes – has made no headway. Puneeta Kuretti outside the unused toiled built under the Swachh Bharat scheme in her village Kursel. The toilet has been lying unused since it was built in early 2017. Credit: Sukanya Shantha

Kanker/Dantewada (Chhattisgarh): In early 2017, when the Kanker district collector’s office sent officials to survey the 50-odd houses in Chhattisgarh’s Kursel village in Antagarh tehsil, an acute sense of anxiety plagued the villagers.

The survey was to forever change the way villagers perceived their relationship with daily defecation. Toilets were to be built for all 50 houses, and the village was to be declared open defecation free (ODF).

Within months, every house in the village, like 18,769 other villages in Chhattisgarh, got its toilet. But none were put to use for the expected purpose.

Forty-year-old Puneeta Kuretti explains how the toilets led to a major frenzy in the village. “It is unfathomable for us to relieve ourselves so near our residence. Our interaction with the forest is organic. We have always been more comfortable walking some distance away from home, into the forest, to relieve ourselves. No one in the village has really used the toilets since they were built,” Kuretti says.

What Kuretti claims is true. Almost all houses in the village have converted their toilet into a storeroom, or simply abandoned it. Lying unused since they were built, the concrete cement structures, in most cases, have detached from the sewage pipes. While the district administration has built the bare structures, other essential facilities like running water in the toilet taps are still missing. In many cases, the toilet doors have fallen off their hinges.

While the reasons vary in each case, the villagers are clear about how they feel about building toilets so close to where they live. Contrary to the popular notion that building toilets exclusively for every house helps create a more sanitary and hygienic lifestyle, the tribal community here believes that defecating in the forest has allowed them to lead a disease-free life.

“We face water scarcity in the region. We do not have piped water supply here. It is difficult to keep the toilets clean with limited water. So, defecating far away from where we live is the sensible option,” says Nandu Korhe.

Dharam Korche, another villager, says since most houses in the village are far- flung, the only time most people end up meeting and interacting with each other is when they enter the forest to either defecate or collect firewood. “It is almost ritualistic for women from the village to set out in the morning to defecate. Men too follow a certain pattern. These are essential aspects of our community life,” Korche feels.

In October, days before the state assembly elections, when this reporter travelled across several villages in the Bastar division (which comprises of six districts – Bastar, Dantewada, Bijapur, Narayanpur, Sukma and Kanker), most villagers said that the toilets were built in haste and not usable. 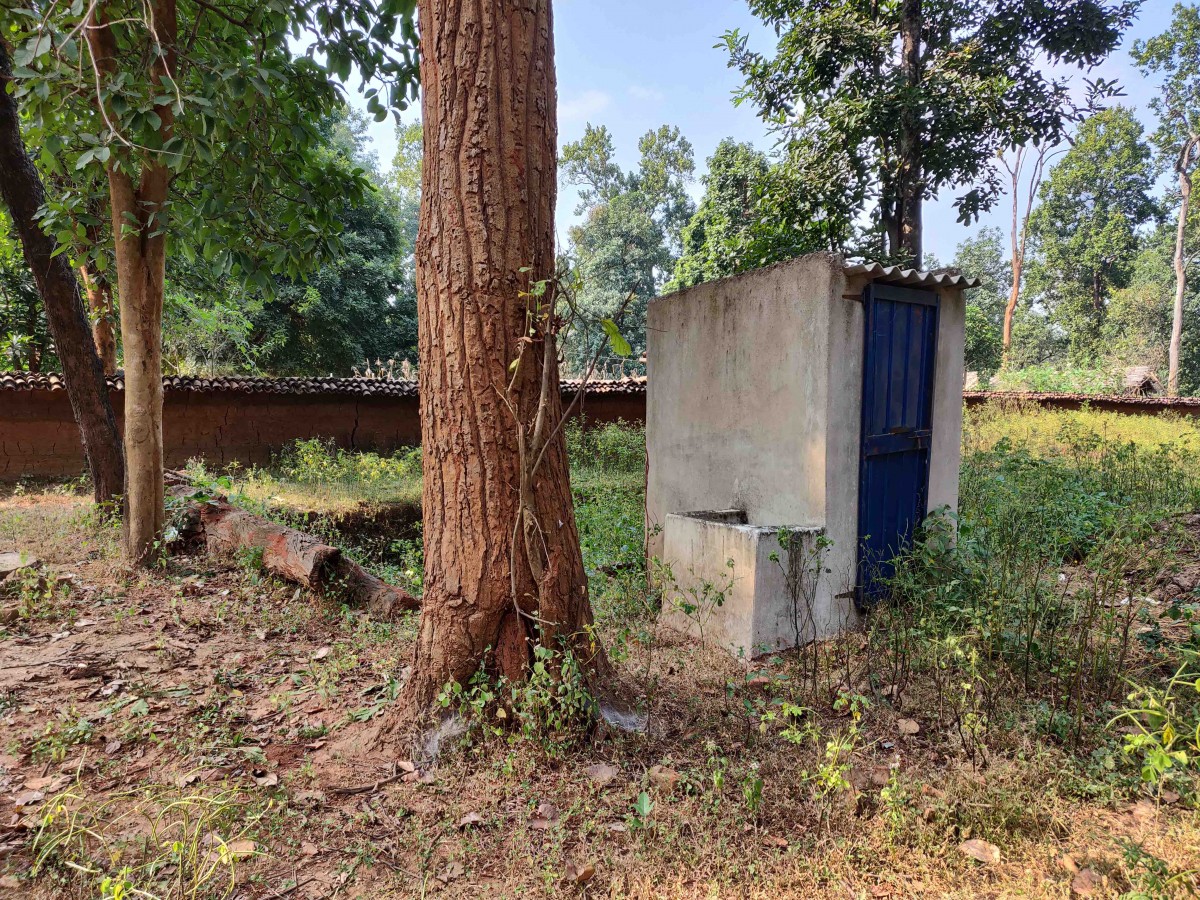 Most toilets in the Adivasi belt of Chhattisgarh have not been used. Residents have either converted them into store rooms or abandoned the structures. Credit: Sukanya Shantha

People found ways to put the rectangular structures to creative use. While some had converted the toilets into firewood storage areas, some have been using them as chicken coops. At other places, the toilets were converted into storerooms to stock cooking items.

Swachh Bharat in the Naxal-affected region

Passing by the highly militarised region of Kotindaga village in Kanker district, where the Central Reserve Police Force (CRPF) has built over five camps with over 300 armed policemen in each, mud houses with dilapidated toilet structures were visible.

Dalsmam Gawade, an elderly person in Kotindaga village, recalls an incident from 2017 when some CRPF officials allegedly entered the village as part of a routine combing drill, and ransacked it. The toilet in his house was partly broken in the process, claims Gawade.

Also read: A Mizoram Town Is Showing the Way to Community-Driven Sanitation

“They came and stormed into our houses. Most of our belongings were ransacked. The toilets that were only recently built were all destroyed too,” he says, as he points at a broken toilet structure which has been rendered unusable.

Chhattisgarh’s obsession with the ODF tag

The Raman Singh-led government in the state (until November 2018) had shown great interest in the implementation of the Swachh Bharat Mission. So much so, that 10,000 toilets were built in one block in a matter of 10 days.

Singh had declared in his election rallies las year, “Vikas kiya hai, vikas karenge (I have carried our development here, and will continue to do so.)” While measuring the state’s “vikas”, Singh had time and again mentioned the toilets built across Chhattisgarh, especially in the Naxal-hit regions.

However, this plank of development was not an electoral success, and the BJP lost the elections. After three consecutive terms, Raman Singh made way for the Congress government led by Bhupesh Baghel.

While crossing Varche, Bhaisgaon, Aturbeda and Murragaon villages in Kanker tehsil, it is clear that the ODF villages exist largely on paper. Local says that the armed rebels have a significant presence in these villages. This makes them inaccessible to outsiders, especially government bodies. 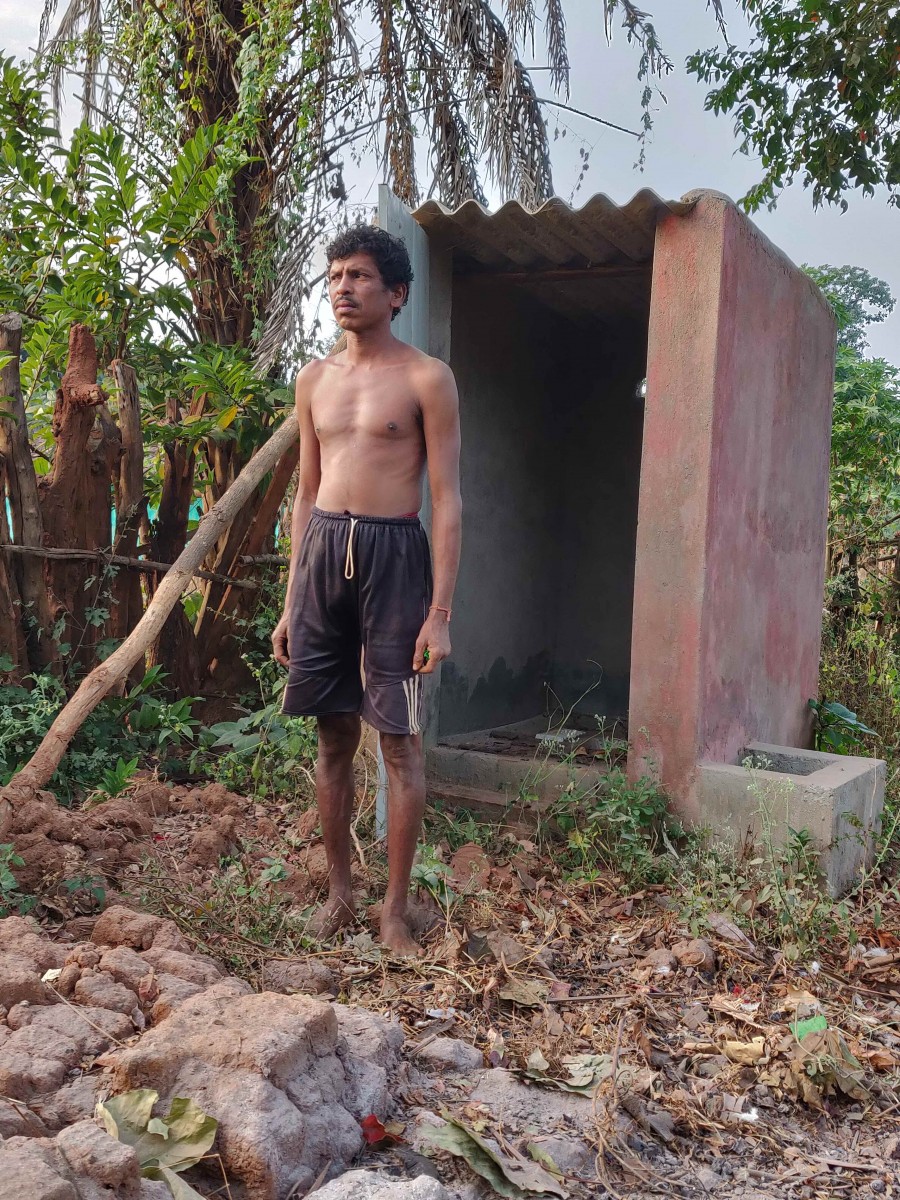 Residents of Kotindaga village in Kanker district say most of the toilets here are unusable. Credit: Sukanya Shantha

M. Darro, a local, took this reporter to Murragaon village to show how ground realities did not match the government’s claims. The 36 houses in the village are without toilets. Darro says that since the village is remote, and known for the presence of Naxals, even government officials avoid coming.

“The only government presence seen here is the occasional visit made by the CRPF,” Darro claims.

He also adds that many villagers here do not participate in government schemes out of the fear of Maoist attacks. “Whether they agree or not, villagers here are forced to follow the Maoist diktat,” Darro adds.

In November last year, soon after a photojournalist and three District Reserve Guard (DRG) personnel were killed by armed Naxals in a well-planned ambush in Dantewada’s Nilawaya village, this reporter had travelled to Nilawaya and nine remote villages around it. Since these villages are within Naxal control, they have remained outside the state’s radar.

On interacting with the villagers, it became evident that no state schemes had ever reached these villages. The possibility of building toilets doesn’t seem to be on the horizon.

There are several such villages in the south Bastar division. If toilets are missing here, so are the public distribution system (PDS) stores, schools and primary health centres. But the disproportionate focus on the Swachh Bharat Mission has overtaken the development narrative in the state.

“I would have rather had an ambulance made available for the village to reach the hospital in time than have these meaningless structures built here. At least the state would have saved some precious lives,” says Kuretti. But is the new government listening?