As opposition mounts criticism of the government's handling of the incident, the photographer who had attacked and stomped on an injured villager has been arrested. 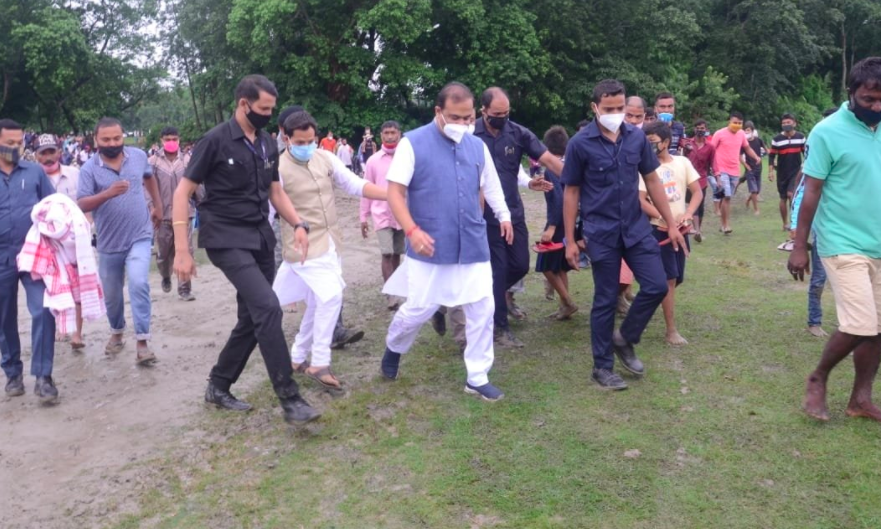 New Delhi: The Assam government has ordered a judicial inquiry into the circumstances leading to police violence on villagers protesting against an eviction drive at Sipajhar in Assam’s Darrang district on September 23. Two villagers died in police firing and at least 20 were injured in the clashes. Police have claimed several personnel have been injured as well.

An order issued by the Home and Political Department’s Secretary Debaparasad Misra said the government has decided the inquiry will be conducted by a retired judge of the Gauhati high court. 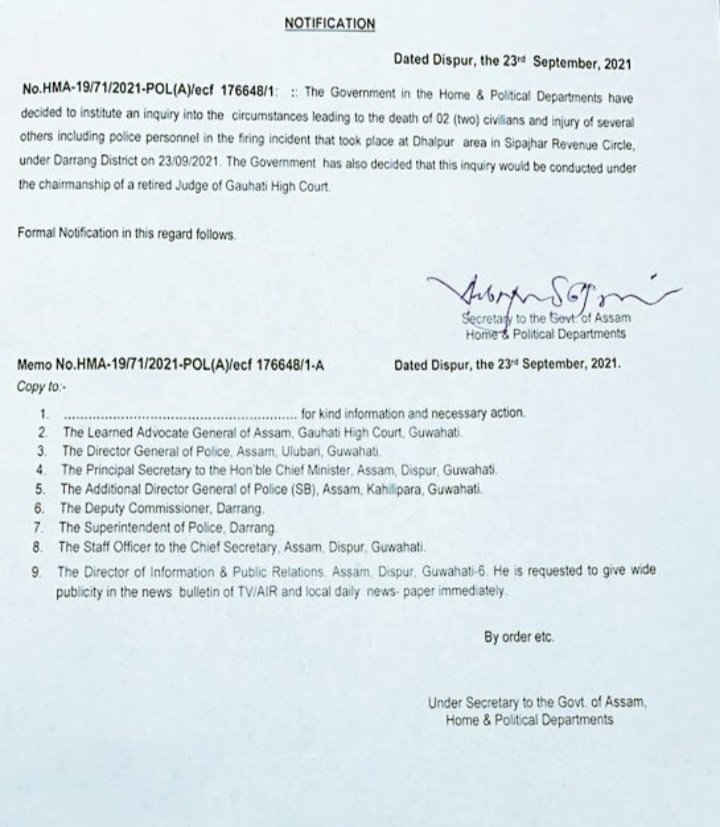 The two dead men have been identified as Saddam Hussain and Sheikh Forid.

The public protest had erupted over the demand for rehabilitation of nearly 800 families evicted from the land they were living on for decades.

Video of the violence shows brutal scenes, including police in riot gear firing unseen targets from behind the trees and at a man holding only a makeshift wooden stick.

One of the video clips doing the rounds on social media shows a horrific scene where a man with a bullet wound on his chest – presumed to be the same person who was fired at – lies motionless and is attacked by a man slinging a camera. As The Wire had reported yesterday, news agency PTI has identified the man as Bijay Shankar Baniya, a photographer who was hired by the district administration to document the situation. Baniya has been arrested. At a later stage of Baniya’s prolonged attack, on the unmoving body of the protester, some policemen appear to stop him.

Assam DGP Bhaskarjyoti Mahanta said Baniya had been arrested, and his case handed over to the CID, Indian Express has reported.

Currently in Sipajhar, taking stock of the ground situation.
The cameraman who was seen attacking an injured man in a viral video has been arrested.

As per wish of Hon. CM @himantabiswa I have asked CID to investigate the matter.
Cameraman Bijoy Bonia is in @AssamCid ‘s custody.

“The only thing I can say is that having seen the video, we will take action against him (Baniya)… no questions asked,” special DGP G.P. Singh told Express.

However, police have not yet confirmed the identity of the protester or his condition.

Darrang Superintendent of Police Sushanta Biswa Sarma, a younger brother of chief minister Himanta Biswa Sarma, claimed the protesters had sharp weapons and had pelted police personnel and others present with stones.

The injured include eight policemen, police have claimed. Assistant Sub-Inspector Moniruddin, among them, is admitted at the Gauhati Medical College Hospital and is in a critical condition.

Chief minister Sarma said, meanwhile, that the eviction drive will not be stopped. “The police has been entrusted with the responsibility of clearing the land from encroachers and they will continue to do it till the job is done. Eviction will stop once it is dark and resume again tomorrow,” he added.

The Darrang district administration has so far cleared 602.40 hectares of land and evicted 800 families since Monday, and demolished four religious structures, which they claim were “illegally constructed,” at Sipajhar.

The chief minister had visited the place on June 7 and inspected the riverine areas which were deemed as having allegedly been encroached upon illegally, near the Dholpur Shiva temple, and directed the district administration to clear the area for the government to start a community farming project.

The ruling BJP has also said that opposition parties politicising the issue had “vested interest”.

The government had given prior notice to the settlers to clear the land but they refused to do so at the “behest of third parties”, BJP spokesperson and Rajya Sabha MP Kamakhya Prasad Tasa said.

The police, along with officials of the district, urged the protesters to move away from the place and not indulge in violence but they refused which “makes them offenders of the law and the BJP government has no tolerance for those who are against the law”, he added.

“Assam is on state-sponsored fire. I stand in solidarity with our brothers and sisters in the state- no children of India deserve this,” he wrote.

Assam is on state-sponsored fire.

I stand in solidarity with our brothers and sisters in the state- no children of India deserve this. pic.twitter.com/syo4BTIXKH

Assam Pradesh Congress President Bhupen Kumar Borah demanded a judicial inquiry into the “barbaric act” of police firing on protesters. “The very act of eviction is in itself inhuman especially during the Covid situation,” he added.

The Supreme Court had also given a directive against eviction during the pandemic situation yet the state government led by Sarma has been behaving in an autocratic manner to evict the residents of Dholpur who have been living in the area since the 1970s, he said.

The people in the area have been subjected to repeated harassment by the BJP government since it came to power in 2016, Bora alleged.

The party’s Rajya Sabha MP Ripun Bora called the incident “barbaric and inhuman”. He said, if foreigners were living in the area, the government should take steps in accordance with the law but not harass genuine citizens by expelling them from their homes.

The Chief Minister Himanta Biswa Sarma’s own brother is the Superintendent Police of the Darrang district where the barbaric violence took place. It is clear that this CM-SP duo did not want a peaceful resolution to the eviction drive. The CM continues to bring shame to Assam.

AIUDF MLA Ashraful Hussain tweeted “Terror force of fascist, communal and bigoted government, shooting at its own citizens….The appeal of these villagers, against eviction, is pending in the High Court. Couldn’t the government wait till the Court order?”

The newly formed Raijor Dal also condemned the firing incident, saying that it reflects the chief minister and the BJP’s extreme “communalism and autocratic rule”. Party spokesperson Ashraful Islam, in a statement, demanded that the evicted people be immediately rehabilitated.

Assam Jatiya Parishad (AJP) President Lurinjyoti Gogoi and General Secretary Jagadish Bhuyan said the eviction was carried out in an “inhuman manner” and that the government should have given prior notice, provided the families with alternative land or housing facilities and a comprehensive rehabilitation package.