These steps are being taken to prevent the spread of COVID-19, governments have said. 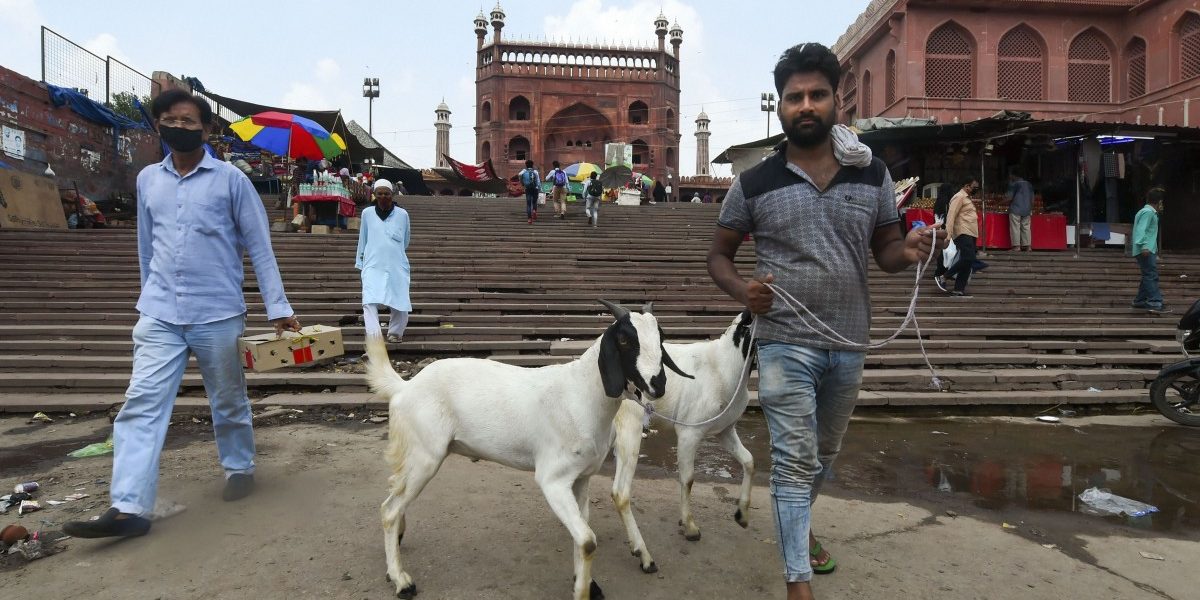 Goats being sold in New Delhi on Sunday, ahead of Bakr Eid. Photo: PTI/Shahbaz Khan

In Maharashtra, after a meeting of chief minister Uddhav Thackeray, deputy chief minister Ajit Pawar and home minister Anil Deshmukh among other ministers, guidelines were issued on July 17 asking the Muslim community in the state to celebrate Bakr Eid in “a simple manner”. As per news reports, a ban has been placed on all religious programmes and people have been asked to offer namaz at home and not in the mosques and Eidgahs.

According to the guidelines, no relaxations will be made in containment zones due to the festival. People across the state have also been asked to buy goats or sheep for sacrifice either online or over the phone as markets, such as the one in Deonar in Mumbai that people usually throng to buy and sell sacrificial animals, have been shut due to the pandemic. The government’s guidelines said “qurbani” and the Bakr Eid celebrations should be symbolic this year.

Though state minister for textiles and fisheries Aslam Shaikh had earlier said that the government would initiate online purchase of sacrificial animals, Congress leader Naseem Khan wrote a letter to the chief minister on July 26 stating that no such portal was mentioned in the guidelines and that has caused confusion among people. Khan urged the chief minister to rethink on the guidelines stating, “This has hurt sentiment(s)”.

In Madhya Pradesh, the Shivraj Singh Chauhan government has ordered a fresh lockdown for ten days, including on Bakr Eid which falls this August 1. The guidelines have barred offering prayers in public places and has not allowed opening of the traditional markets to buy the sacrificial animals due to the virus.

According to news reports, goat traders in some parts of the state have formed WhatsApp groups to sell the sacrificial animals.

In Uttar Pradesh, the state government issued a detailed guideline for Bakr Eid on July 22. The government has asked clerics to ensure that devotees don’t gather at public places to offer namaz on the day and do so only at home. News reports have said that the Adityanath government has also put a ban on the transportation of goat meat and animal slaughter in the open. Section 144 will continue to be in place at mosques along with other religious places.

An advisory issued by the state police chief on July 24 to the police commissioners of Lucknow and GB Nagar stated that drone cameras should be used to keep a watch on areas with thick population.

The BJP government in Karnataka has also issued a series of do’s and don’ts for Bakr Eid on July 26. The guidelines have prohibited mass prayers on the occasion at public places. A.B. Ibrahim, secretary, minority welfare, Haj and Wakf, has reportedly said that only 50 people will be allowed to offer prayers at a mosque at one time. Mosques have been asked to check people’s body temperature through thermal screening before allowing them in. The government’s order said handshakes and traditional hugging after the prayers won’t be allowed and each person must bring their own prayer mat.

Gujarat too has issued detailed guidelines specific to Bakr Eid. According to a PTI report, police commissioners in Ahmedabad and Surat have passed orders on July 26 prohibiting animal sacrifice in public places and also not at private places if it is visible to the public. The commissioners’ notifications said that such sacrifices “would hurt sentiments of people of other faiths and it would disrupt communal harmony”. It added that the ban was necessary in the wake of the coronavirus situation.

There will also be a ban on decorating the animals and taking them out in a procession ahead of the sacrificial ritual.

On July 25, the Uttarakhand government too issued a set of guidelines keeping in mind the upcoming festivals. According to ANI, while the police administration will speak to local clerics and religious leaders of the mosques regarding offering namaz during Bakr Eid, on the occasion of Krishna Janamasthami, no “group function” will be organised at police lines and PAC Battalions to avoid mass gatherings.