Baghel: 'Had PM Taken States Into Confidence on Lockdown, the Chaos Could've Been Avoided'

Had there been consultation with the states, the Chhattisgarh chief minister told The Wire, relief and rehabilitation measures for those adversely affected by the lockdown could have been put in place. 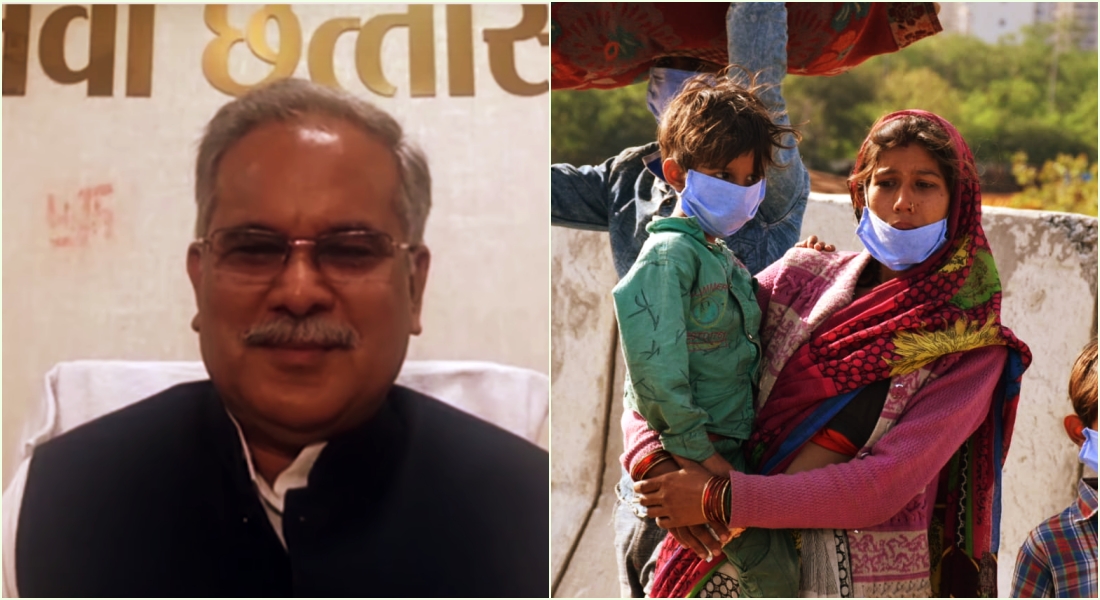 Bhupesh Baghel, chief of minister of Chhattisgarh (left); a migrant worker and her children at the Delhi-Uttar Pradesh border on March 30. Photo: Ismat Ara/The Wire

New Delhi: “If the chief ministers had been taken into confidence, we could have avoided the chaos which followed the prime minister’s lockdown announcement,” Chhattisgarh chief minister Bhupesh Baghel told The Wire in an exclusive interview on Tuesday. “The people are in great distress. The Central government can issue orders but the implementation part has to be taken care of by the states.”

Speaking to The Wire over Skype, Baghel said that the Centre should have consulted the states before announcing the nationwide lockdown. He feels that the lack of preparedness on the part of Central government led to lakhs of migrant workers across the country setting off for their villages, defeating the very purpose of the lockdown as a consequence.

“From transporting people from one place to another, taking care of their well-being to feeding them, everything is being done by the state governments. The Central government has only made the test kits available to us” for identifying the novel coronavirus, Baghel said.

Within hours of Prime Minister Narendra Modi’s 21-day lockdown announcement on March 24, lakhs of daily wagers and migrant labourers uncertain of their future in big cities where they no longer had food, jobs or emotional security set off on the long journey home. With all public transportation suspended, thousands of workers were seen walking on highways and main roads leading out of Delhi and other cities. On Sunday night, a huge crowd – including frail old people and small children – built up at Delhi’s Anand Vihar bus station in the hope of boarding one of the buses hurriedly arranged by the Uttar Pradesh government.

“(If the PM) would have informed us in advance about the tentative date of the lockdown and that we should make necessary arrangements, we would have made a list of essential things and consulted each other,” the Chhattisgarh CM said. “The mismanagement that prevailed (post announcement) could have been avoided. But the ‘Bharat Sarkar’ did not do that.”

The Chhattisgarh CM said  that mindful of the COVID-19 pandemic, his government had actually implemented a lockdown on March 21 and since then his government has provided ration to two crore and 44 lakh people out of a population of 2.8 crore. But he said the state government has not received a single penny from the Central government from the relief package announced by Union finance minister Nirmala Sitharaman to deal with the dislocation caused by the lockdown.

Baghel said that when the prime minister asked people to come on their balconies and bang thalis at 5 pm on the day of the janata curfew on March 22, the flood of people that came out on the streets defeated the whole purpose of social distancing. He further said that if the government had proactively involved the country’s business community, the humanitarian crisis created by the mass movement of labourers could have been averted.

“I appealed to all the industrialists that they have to arrange for the food and accommodation for the labourers for one month. In case they face a problem, the state government will help them. That is the reason why my state did not witness the commotion faced by other states.”

But like other states, Chhattisgarh too does not have enough test kits to find out the exact number of people who have been infected by the coronavirus. The state so far has only been able to test 800 people, out of whom eight have been found to be infected by the virus and are undergoing treatment.

Baghel said testing for the virus is out of the jurisdiction of the state and the responsibility of providing the test kits lies solely with the Central government.

Why was it that only people with visible symptoms are being tested while there is no facility available for those wanting to go under medical investigation, he wondered.

The chief minister did not appear very optimistic about the revival of the economy once the lockdown is over. He feared that it could take not just months but years for the economy to recover from the shock of the lockdown.