In the Wake of Ayushman Bharat Come Sops for Private Hospitals

To incentivise private investment, the government will help in land allotment and gap funding for private hospitals in Tier 2 and Tier 3 cities. 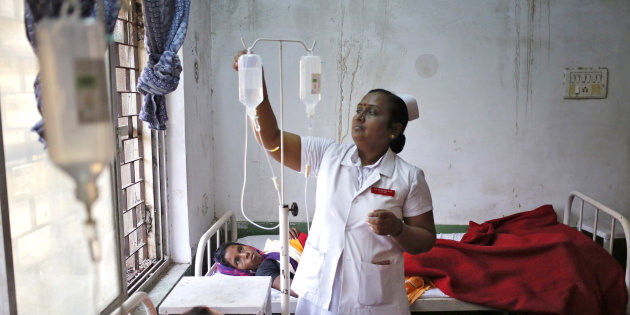 New Delhi: The Narendra Modi government has announced plans to make hospitals into an “industry” under the Ayushman Bharat health insurance scheme and give a range of sops to private hospitals such as land and funding.

The move follows months of apprehensions by activists that the massive insurance project would likely benefit the private sector and not the public sector.

The government has issued a brief note with broad guidelines for private investments into setting up hospitals in Tier 2 and Tier 3 cities, for Ayushman Bharat.

In it, the Union health ministry says the government will intervene in the setting up of private hospitals in order to “incentivise it”.

Some of these interventions would include: allotting unencumbered land to private hospitals, providing funding for projects which are deemed unviable by the private sector and speeding up clearances.

“Even though there is so much competition in big cities among private hospitals, we already experience their profiteering and loot. Now the Ayushman Bharat scheme will create geographical monopolies for [the] private sector in smaller towns and remote areas,” says Sulakshana Nandi, a public health researcher based in Chhattisgarh.

“On the one hand, the government is unable to regulate the private hospitals that currently exist, and now it will be actively investing in creating more such hospitals,” she says.

However, Alex Thomas of the Association of Healthcare Providers India differs: “This was one of the suggestions made by our organisation, repeatedly to the government. This will definitely encourage doctor-investors and others to consider setting up hospitals, and contribute towards the success of Ayushman Bharat.”

He says that private hospitals should be allowed to do much more than just treat patients under the Ayushman Bharat scheme. “For these hospitals to be viable, they should be also allowed to treat other patients, since rates for most procedures under Ayushman are below cost.”

Hospitals as an “industry”

So far, private hospitals in India (even corporate hospitals) and medical colleges have worked largely on a “trust model” – in which a trust is set up that owns the hospital, or a company and management own the hospital via the trust.

A 2016 report from Nishith Desai Associates says that the trust and management services company model is the “prevalent model in India”. But one of the challenges for the private sector here is that by virtue of being set up via a trust, the government imposes restrictions on the expansion of the hospital and makes it necessary for private hospitals to provide services to the poor.

The report says: “Models where hospitals are owned by trusts and managed by hospital management companies may lead to certain concerns from an investment perspective.”

The government’s announcement to incentivise the private health sector and classify hospitals as an “industry” will allay some of these investment concerns. It could change the healthcare landscape in India considerably, in both the private and public sectors, in rural and urban areas, and across classes of patients. 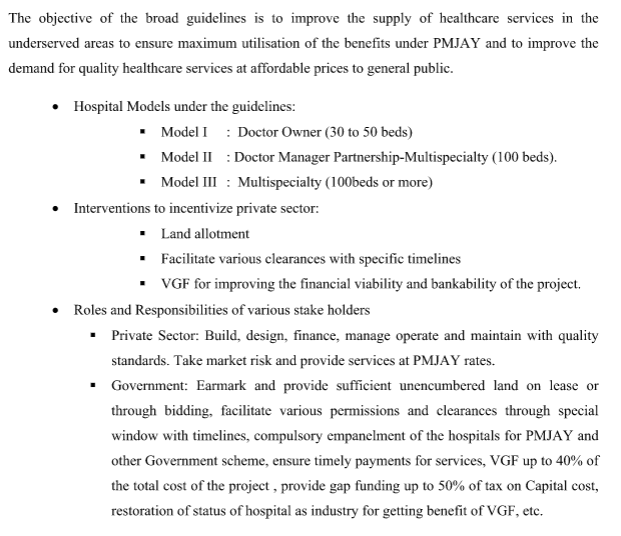 Objectives of the broad guidelines to improve supply of healthcare services in underserved areas.

The government also says it will provide VGF for “improving the financial viability and bankability” of private hospitals.

VGF is essentially a capital subsidy which the government can provide to project bidders and often, the bidder who asks for the lowest gap funding may clinch the project.

The government says it will provide VGF for private hospitals up to 40% of the total cost of the project, and will also provide gap funding of up to 50% of tax on capital cost.

The private sector will be allowed to “build, design, finance, manage, operate and maintain” these hospitals, but it hasn’t been indicated whether they would also have to “transfer” the hospitals to the government, despite it paying and subsidising much of the expenses for the creation of this infrastructure. In a typical public private partnership (PPP) model, a transfer clause is also often present.

“In Chhattisgarh, Escorts-Fortis Heart Centre was given gap funding and land. But it did not give concessions, did not adhere to its contract and was finally shut down,” says Nandi.

The idea of providing VGF is not new. In India’s solar mission, for example, analysts observed that it is not the ideal way to subsidise photovoltaic plants. The Union ministry of new and renewable energy had released proposed guidelines on VGF in 2015, but a report in Down to Earth said that the scheme may actually lead to setting up inefficient solar projects.

In other industries like aviation, where the UDAN regional connectivity scheme depends on government-backed VGF, state subsidies have played out in complex ways. On certain routes, the civil aviation ministry has run out of money for disbursal of VGF.  On many others though, the lure of government set off an initial rush among entrepreneurs that eventually crashed and burned.

In November last year, the Centre sent a note to all states asking them to sanction loans at agricultural rates of interest and provide electricity at residential rates, to these private hospitals. They want private hospitals to come up in Tier 2 and Tier 3 cities.

In July, the NITI Aayog and health ministry proposed a model to all states to privatise urban health care – offering private players the chance to capture beds and patients who come to government district hospitals – for the treatment of non-communicable diseases. Private players were being offered this access for a 30 year lease.

A report in The Wire analyses the intersection between the NITI Aayog’s proposal for district hospitals, the National Health Policy and Ayushman Bharat. The author says that the move to hand over public health care to the private sector in all these three policies, would be a “a massive drain of public money and public institutions into the private sector.”