Over the last two years, the PMO and home ministry have evaded questions on the Dharma Sansad in 2018 and the recent constitution of a trust overseeing the temple's construction. 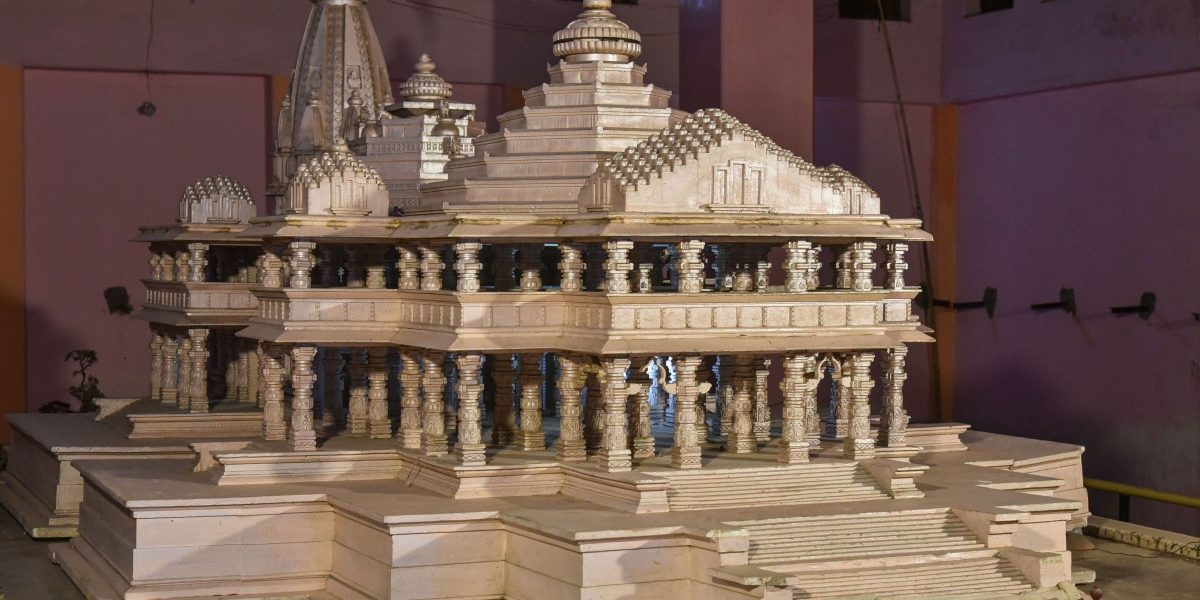 A model of the Ram temple displayed at Kar Sewak Puram in Ayodhya. Photo: PTI

New Delhi: The Bharatiya Janata Party has been very far from a silent spectator on the demolition of the Babri Masjid and construction of a Ram temple in Ayodhya. But when it comes to questions around recent developments, the Narendra Modi government has been far less forthcoming.

The Centre has largely kept mum in response to two Right to Information queries – one filed before and the other after the Supreme Court’s 2019 judgment on the Ayodhya title dispute. The apex court’s ruling paved the way for the construction of a temple, and construction work will begin soon after the much-touted ‘bhoomi pujan‘ ceremony on August 5.

At VHP-RSS ‘Dharma Sansad’, BJP was urged to construct temple

In November 2018, a ‘dharma sansad’ was organised by the Vishwa Hindu Parishad and Rashtriya Swayamsewak Sangh, parent organisation of the BJP, to demand the construction of a Ram temple since the party was in power both at the Centre and in Uttar Pradesh.

It was also at this event that Shiv Sena chief Uddhav Thackeray – who in 2019 went on to became the Maharashtra chief minister – said the government should bring a law and pass it in both houses of parliament to construct a temple. He was quoted as saying: “I’ve no hidden agenda in coming to Ayodhya. I’ve come to express sentiments of all Indians and Hindus across world. All are waiting for Ram Temple.”

However, when a Lucknow-based RTI activist Nutan Thakur filed a query with the Prime Minister’s Office a few days later, on November 27, 2018, to seek “details of the various directions/instructions issued by the Prime Minister and/or the Prime Minister Office to the Ministry of Home Affairs and/or the Uttar Pradesh Government in the wake of the recent incidences in Ayodhya related with Dharma Sansad”, she found the response unsatisfactory.

The chief public information officer, instead of providing a response to her queries, termed the information sought “indiscriminate and of a roving and open-ended nature”. Thakur then filed a first appeal, but the First Appellate Authority upheld the CPIO’s response.

Thakur then moved the Central Information Commission, which heard the matter in June this year. The matter came up before chief information commissioner Bimal Julka, who said that the CPIO submitted that the subject raised by the appellant in her RTI application is very wide and the appellant failed to provide the specifics of the correspondences with respect to which information was sought.

Though in view of the CPIO’s submissions, the CIC disposed of the matter, Thakur, who is an RTI activist and files queries pertaining to various issues of public interest, told The Wire that of late “most CPIOs have started refusing replies on the ground that either the information sought is exempted, sensitive or vague”.

MHA denies information on composition of Trust for Ram Temple

Similarly, another RTI application filed by activist Sushil Raghav with the Union home ministry, seeking details about the trustees of the Trust constituted to oversee the construction of a Ram temple following the Supreme Court judgment, failed to elicit any details.

The apex court had in its November 2019 judgment directed that a trust be set up to construct a temple at the site where the Babri Masjid once stood.

In his petition, filed on June 13 this year, Raghav asked about six specific aspects pertaining to the trustees and the trust appointed by the Centre in compliance with the Supreme Court’s judgment. He had asked for a full list of the names of trustees, their locus standi for having been selected as trustees, copies of details of criminal cases registered as FIRs against them, a copy of the constitution of the trust, details about its funds and its aims and objectives.

Watch: Ram, Rafale and Nationalism as the Opium of the People

It was reported that the CPIO of the home ministry, in a quick reply sent within a week of the application, stated that “in this regard, it is informed that information(s) sought by you are falls under the section 8 of RTI Act 2005. Hence, information could not provided (sic)”. Section 8 of the Act lists the matters that are covered under “exemption from disclosure of information”.

Petition had asked for details of trustees, Shah had given only partial information

Raghav had earlier in February also made a representation to the MHA soon after Prime Minister Narendra Modi had on February 5 announced the setting up of a trust. He had sought details on the full composition of the body since details of only some members were revealed by Union home minister Amit Shah.

In that representation to the MHA, Raghav had also claimed that he hailed “from dynasty of Lord Shri Ram or Ramlalla (juristic person)” and that his surname was “derived from Raghu—descendants of Raghu the forefather of Lord Shri Ram”. On not getting a response to that, he filed an RTI application on June 13.