In inventing the celebration of 'deepotsav,' Adityanath has ensured focus firmly remains on religion instead of governance. 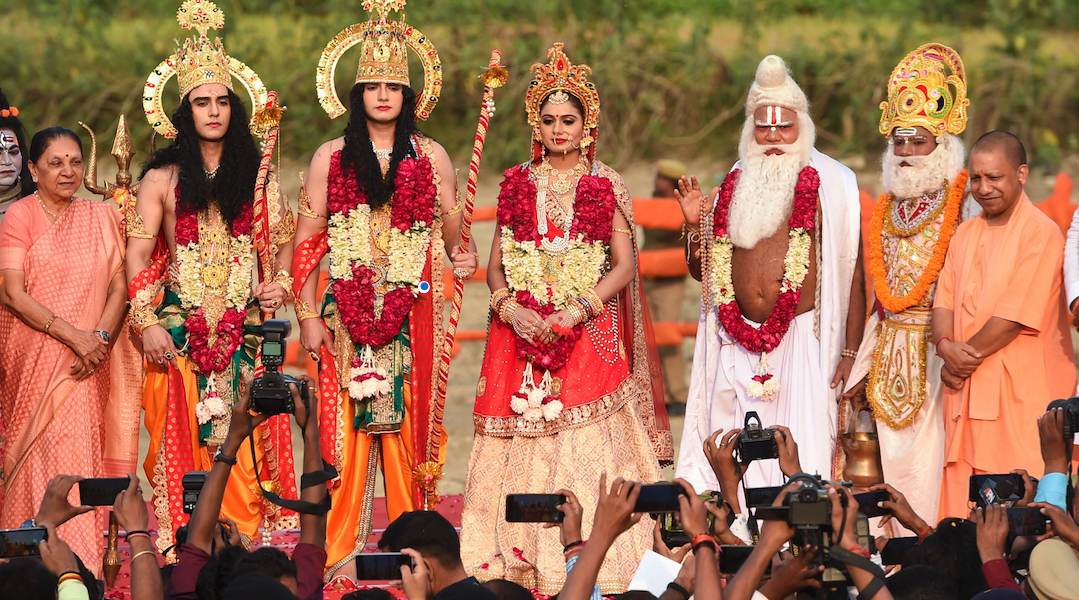 Lucknow: This was the second year in succession that Uttar Pradesh chief minister Adityanath organised a mega pre-Diwali event in Ayodhya on October 26.

Everything has grown in size and magnitude.

As against the lighting of three lakh ‘diyas’ (earthen oil lamps) in the previous year, the Saryu banks and ‘Ram ki pairi’ were lit up with as many as 4.10 lakh diyas – recorded in the Guinness book in which Uttar Pradesh has broken its own record of 2018. That is besides the 1.40 lakh ‘diyas’ claimed to have been lit across the winding streets of Ayodhya (interestingly, the only other example of lighting ‘diyas’ was that of the controversial Baba Ram Rahim, who first went into the Guinness book after lighting 1.5 lakh ‘diyas’ at his ashram).

Three Ramlila artistes symbolising Ram, Sita and Lakshman arrived in a helicopter to mark the return of Lord Ram after a 14-year exile in the erstwhile ‘pushpak viman’. They were formally received by the chief minister who carried out the ritual of a symbolic ‘rajabhishek’ (coronation) together with governor Anandiben Patel and the event’s chief guest Veena Bhatnagar, deputy speaker of Fiji’s parliament.

#Deepotsav2019 : Grand #Diwali celebrations at #Ayodhya where over 5.50 lakh earthen lamps have been lit. pic.twitter.com/MXBxPjjEcy

Sure enough, what followed was nothing short of a mega Ram Leela. Yet the chief minister made it a point to term it as the “restoration of the old glory of Ram Nagri Ayodhya and also the return of ‘Ram Rajya’.”

Interestingly, Adityanath went to the extent of even defining ‘Ram Rajya’, which, according to him, was “a state without any kind of discrimination on the basis of caste, creed, language or religion.”

It was a bit surprising that he did not include corruption in that list, as the fundamental connotation of ‘Ram Rajya’ is “corruption-free good governance”. On the other hand, his emphasis was more on development schemes worth Rs 226 crore for the ancient holy town, now designated as a full-fledged district. Terming the event ‘deepotsav’, he also said Chhoti Diwali would be an annual state event and promised to make an annual budgetary provision for it of Rs 133 lakhs. Sure enough, there was much loud talk about the restoration of Ram’s glory and “rebuilding the Avadhpuri of Ram” but no mention of how the chief minister proposed to rid the state of rampant corruption, a complete antithesis to ‘Ram Rajya’.

Adityanath’s speech reflected his long-standing political agenda built on aggressive Hindutva. And he made it a point to attribute all credit to Prime Minister Narendra Modi for ushering in a “modern Ram Rajya”.

Also read: Is Uttar Pradesh Turning Into a Police State?

“In the last five years, India is being recognised as a cultural, strategic and economic power. The commitment with which government schemes and programs are being implemented is a reflection of the arrival of modern Ram Rajya,” Adityanath told the cheering crowds who predictably went into chants of “Jai Shree Ram” and “Mandir yahin banayenge.” The obvious reference was to the much-disputed Ram temple on which the country’s apex court is about to give its final verdict.

Adityanath’s much-touted focus on Ayodhya is also contradicted by his clearly evident priority for his hometown Gorakhpur, which happens to be the headquarters of his popular math, the Gorakhnath temple. Since he has traditionally celebrated Diwali at the math in Gorakhpur, he has skilfully built this hyped narrative of ‘deepotsav’ on the preceding day in Ayodhya.

Diwali came into being with the celebrations that were held on the homecoming of Lord Ram, Sita and Lakshman from their 14-year exile. Technically, the day before Diwali has been known as ‘chhoti diwali’. The day never had any great mythological significance for the devotees of Ram. But thanks to the convenient invention of ‘deepotsav‘, its political significance for at least one ‘Ram bhakt‘ is more than apparent.