In a series of reports, The Wire and The Cross Current have revealed controversial COVID-19-related procurement orders when Himanta Biswa Sarma was Assam's health minister.

Guwahati: The series of RTI-based reports on the Assam government’s procurement of COVID-19 related essentials filed by The Wire in collaboration with Guwahati-based news portal The Cross Current, was a protracted effort of over half a year undertaken in public interest.

The process to collate detailed information from the Assam National Health Mission (NHM) was arduous and took these reporters about six months.

On September 10, 2021, The Cross Current, after consultation with The Wire, filed its first RTI application at the office of the principal secretary, health and family welfare department, Government of Assam. The RTI queries meant for the NHM were as follows:

Please provide the following information regarding procurement of PPE kits, Rapid Antigen Test kits, ventilators and ICU beds to fight the Covid-19 crisis in Assam from March 15, 2020 till the date of furnishing information: 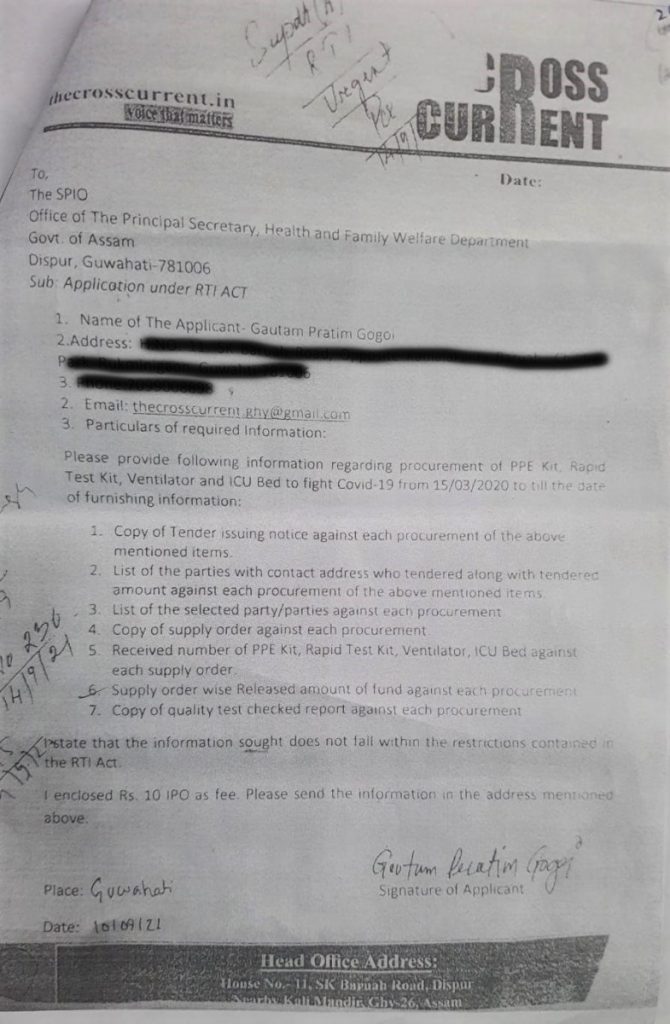 The RTI application filed by correspondent Gautam Pratim Gogoi of The Cross Current in September 2020.

Over two months later – on November 26, 2021 – the NHM responded but only to query no. 5. The department provided us with a partial list of work orders issued to suppliers without mentioning an urgent supply order for PPE kits issued on March 18, 2020 to the chief minister Himanta Biswa Sarma’s wife’s company, JCB Industries. When the health department’s supply order was issued to JCB Industries, Sarma was the health minister.

On December 14, 2021, a letter was sent to the NHM director’s office seeking a complete list of suppliers (information) who were given work by the health ministry to meet the pandemic-induced public health crisis in the north-eastern state. The NHM thereafter forwarded the letter with the RTI application to the state government entity, Assam Medical Services Corporation Limited (AMSCL).

Nearly three months later, on March 3, 2022, AMSCL yet again furnished another partial list of suppliers who were assigned work orders between March 18, 2020 and January 4, 2022. In this list though, it provided us at what rate the health department had issued the work orders to certain suppliers and the quantity received from each.

Meanwhile, The Cross Current filed another RTI application on January 10, 2022, at the NHM’s director’s office seeking a copy of 14 particular supply orders. The selection was arrived at after The Cross Current and The Wire accidentally came across as many as 50 COVID-19 related work orders issued by the NHM that were available in the public domain in its Inventory Management System.

AMSCL, thereafter, informed us that those work orders were available at the Inventory Management System of the NHM but couldn’t be procured without a user ID and password. However, the NHM later conveyed to us that there was no bar on accessing those orders and could be accessed without any password. In other words, they have indeed been available in the public domain.

The urgent supply order for PPE kits granted to JCB Industries prior to the national lockdown was first spotted by The Cross Current in the Inventory Management System, following which a copy was particularly sought as part of the 14 work orders.

Since the NHM didn’t include in the partial list provided to us through an RTI reply the urgent supply order issued to JCB Industries prior to the national lockdown, it would not have been possible for us to bring to the public domain that the then health minister Sarma granted a supply order to his wife Riniki Bhuyan Sarma’s firm without following a tendering/quotation process had we not accidentally come across it in NHM’s Inventory Management System.

Even after the NHM’s statement that those orders could be accessed at its system, The Cross Current continued to seek the 14 supply orders it had originally sought from NHM through RTI, copies of which were ultimately provided by the Mission office on March 29, 2022.

In its defence, the office of the AMSCL, on March 3, 2022, had cited “the ongoing third wave of Covid pandemic with more than 8,000 cases being reported every day” and “the shifting of the AMSCL office to Narengi” as the cause for the delay in responding to the September 10, 2021, RTI application forwarded to it by NHM. 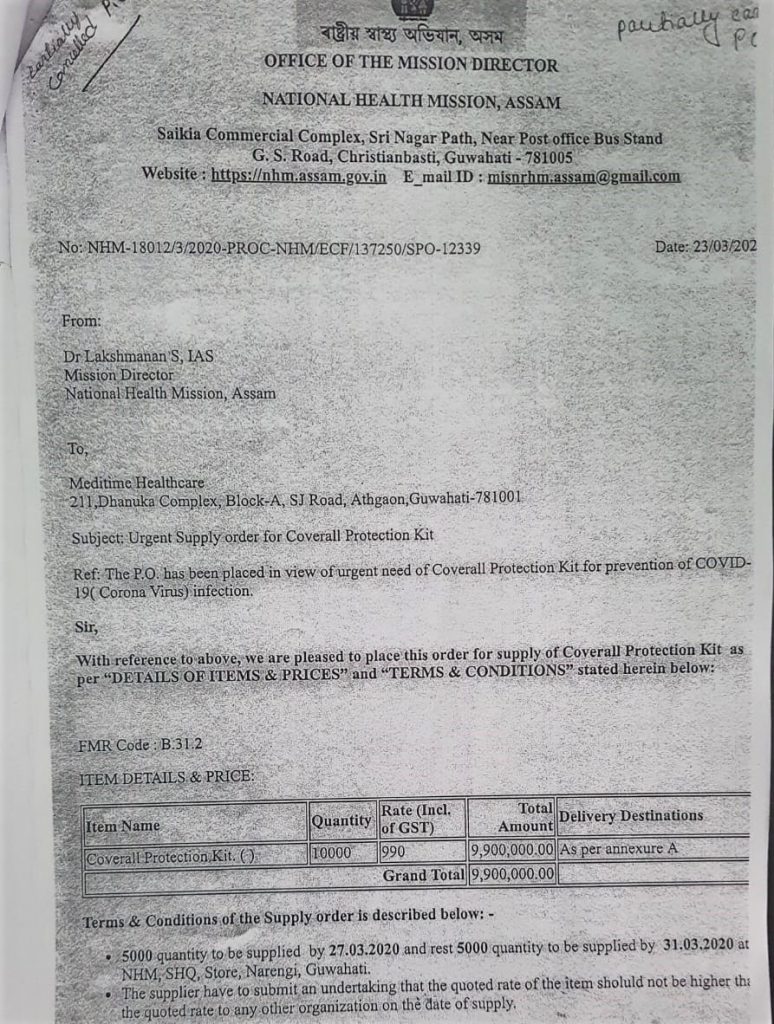 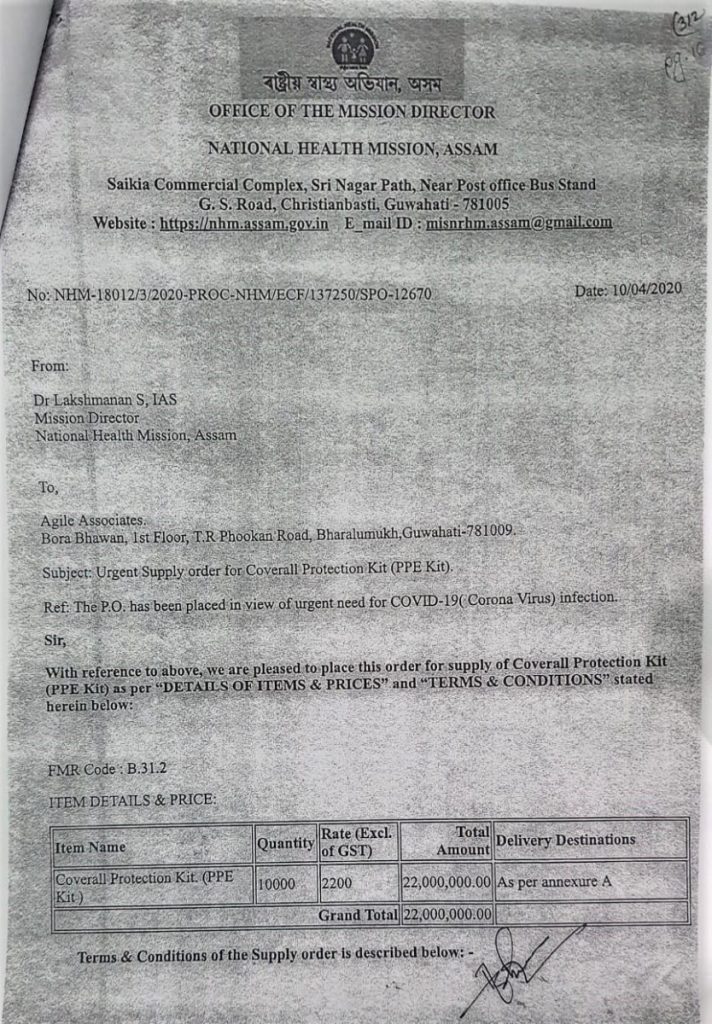 A perusal of the RTI replies to us and what is available at the Inventory Management System of NHM leaves several questions unanswered still. Also, the NHM’s disinclination to provide details on time and in full to the RTI application, and sharing only partial information even after pursuing it through further correspondence makes it look like The Wire and The Cross Current have only hit the tip of the iceberg as far as how the pandemic related emergency procurement by the Sarma-led health department of Assam government was carried out.

The slew of reports that stemmed from parsing the RTI replies can be read below:

Himanta Biswa Sarma Bragged About Buying PPE Kits From China. But an RTI Reply Says His Govt Never Did.

Exclusive: Before Lockdown, Assam Govt Gave ‘Urgent’ PPE Orders to Firms Linked to CM. Here’s How They Turned Out

Exclusive: How the Bulk of Assam’s Sanitiser Orders Went to Firm Linked With CM at Much Higher Rate