More Than 70,000 Stranded People Permitted to Move Within Assam

A call centre had received 41,651 calls from people in different districts who want to take buses to reach home. 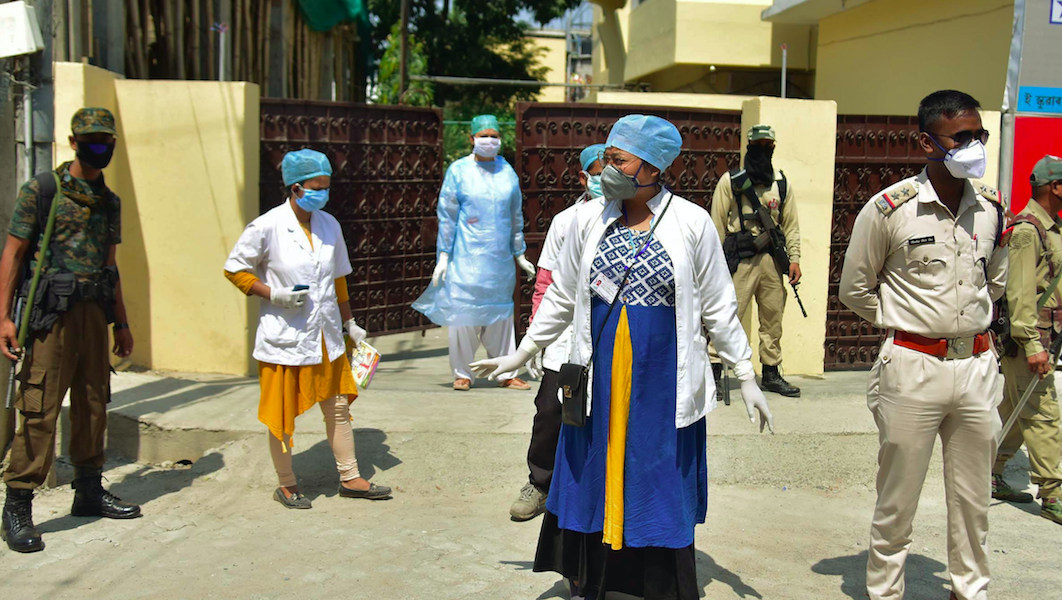 Medics and police arrive to take relatives of a person, who was detected COVID-19 positive in Guwahatis Spanish Garden residential complex, to a quarantine centre in Nagaon district of Assam Saturday, April 4, 2020. Photo: PTI

Guwahati: More than 70,000 people, stranded in different districts of Assam due to the lockdown, have been allowed to move within the state either by ASTC buses or personal vehicles to their homes or workplace during the next three days, starting Saturday.

The call centre has received 41,651 calls from people in different districts who want to take buses to reach their home and the Assam State Transport Corporation (ASTC) is making arrangements for their travel which will be free of cost, health minister Himanta Biswa said at a press conference here on Friday.

Individual bus tickets with travel details will be sent by Friday night to those who will travel on the first day Saturday, the minister said.

The others will receive their tickets a day before their travel, he said.

“The task is huge and I appeal to people to have patience. We will take steps to ensure that these 41,651 people reach their destinations,” he said.

The minister said the service for those travelling by bus will be free and the costs will be now “borne by the ASTC and later reimbursed by the Health department”.

The deputy commissioners have issued one-way e-passes to 31,206 people to travel by their vehicles with 12,206 of them to travel on the first day on Saturday, Sarma said.

The passes of the remaining 19,000 have been staggered over the next two days, he said.

The deputy commissioners had received more than 51,000 requests for passes to travel by personal vehicles but more than 19,000 were rejected as it was not considered as an emergency as specified by the Union Ministry of Home Affairs.

The state government has allowed three days of movement from April 25 for people stranded due to the lockdown within the state in different districts, following the guidelines issued by the Union Ministry of Home Affairs.

This is not a “blanket permission but will be conditional and people can avail this only with the prior approval of the deputy commissioners”, the minister had said earlier.

Those stranded in another districts can return home and these movements will be only one-way for home-bound and office-bound people as many state government offices have reopened, he said.

Patients requiring a visit to hospitals and their attendants will also be issued passes by deputy commissioner who will examine the applications, the minister said.