The displaced people of Dhalpur villages are baffled at the state's retribution after the government had 'legitimised' their settlements by implementing several development projects over decades. 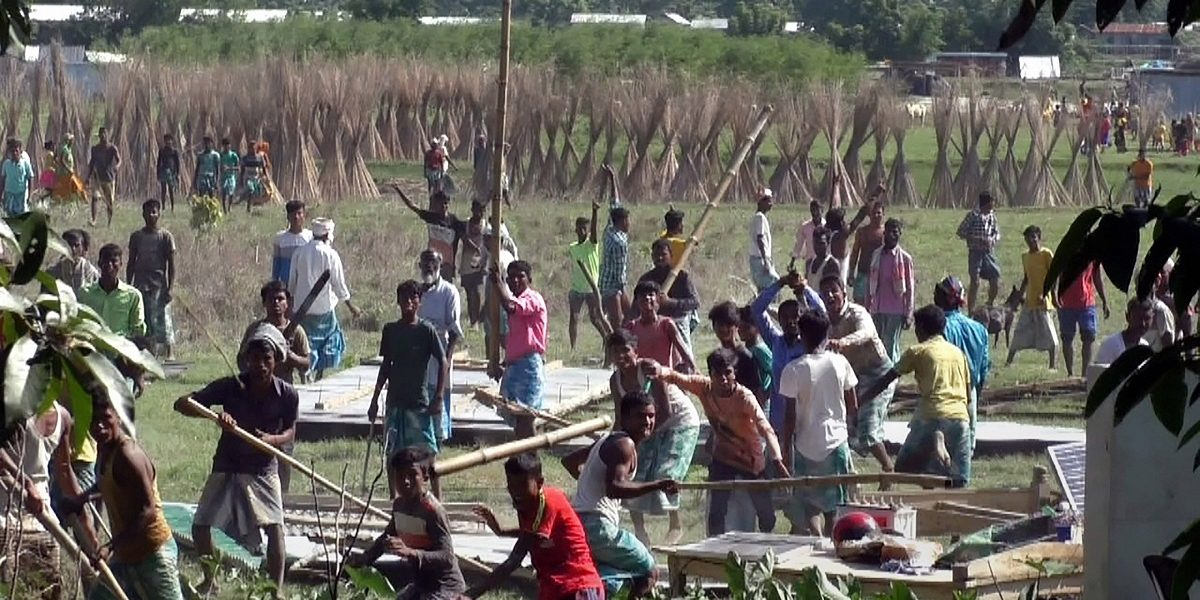 Villagers protest against an eviction drive in Darrang district of Assam, September 23, 2021. The drive was carried out to evict people from government land. Photo: PTI

Dhalpur (Assam): Successive governments in Assam, including the one headed by Bharatiya Janata Party’s (BJP’s) Sarbananda Sonowal, plied the villages in Sipajhar area of Darrang district, the scene of a bloody anti-encroachment drive against “illegal settlers” last week, with facilities like electricity connection, fair price shops, banks and schools, before the proverbial long arm of the law came down hard on them.

The displaced people of Dhalpur I, II and III villages are baffled at the state’s retribution after the government had “legitimised” their settlements by implementing several development projects over decades.

During a visit to the three affected villages at a ‘char’ (sandbar of the Brahmaputra), a PTI correspondent saw scores of facilities created by the government, including toilets built under the Centre’s ‘Swachh Bharat Mission’.

There are five Aadhaar centres on the river island to provide the unique identity cards with a permanent address to people now branded as “encroachers”.

The Darrang district administration, however, claimed these structures were set up by “earlier governments” and will be shifted “as per rules”.

According to different accounts, around 1,200-1,400 houses were razed to the ground on two different days last week, leaving over 7,000 people homeless. The eviction drive, conducted amid stiff resistance by the local people, also left two dead in police firing on September 23, including a 12-year-old boy who had got his first identity proof, an Aadhaar card, just before he was shot dead. Over 20 people were injured, including policemen.

“After 1983, the government started recognising us as erosion-affected people, who were displaced from different flood-prone lower Assam districts. In the subsequent years, they gave us electricity connections,” said Safer Ali, whose house at Dhalpur-III was demolished on September 23.

Gradually, schools, health centres, Anganwadi centres, fair price shops, a post office and sub-branches of several banks came up in the ‘char’, he told PTI while showing around the villages.

“The government also constructed several houses under the Pradhan Mantri Gramin Awas Yojana (PMGAY), previously known as Indira Awas Yojana. They gave us solar panels and built septic toilets at our homes, all under the last BJP government,” Ali said.

Several such toilets constructed under the ‘Swachh Bharat Mission’ by PSU oil firm Numaligarh Refinery under its CSR activities are still there, unaffected by the eviction drive.

“We were provided with solar panels by the government as power supply is erratic here. If we are encroachers, why did the authority give us all the support to improve our living standard here in Dhalpur?” asked Ali indignantly.

The biggest of the government establishments is the Dhalpur Bhetibazar Char Primary Health Centre, which has multiple concrete houses spread across more than 1,000 square metres.

“In the entire Dhalpur area, which is marked for eviction, we have a huge number of government facilities including three health centres, 38 lower primary schools, two ME schools, 42 Anganwadi centres and 13 fair price shops,” said Faizur Rahman of Dhalpur-I.

Dhalpur also has four sub-branches of various banks like the State Bank of India, Central Bank, HDFC and Assam Gramin Vikas Bank and around 10 Common Services Centres (CSC) to promote e-governance, he claimed.

“Around 10% of the houses here were constructed under PMGAY. Almost all the households have solar panels, which were given by the previous governments, including the previous BJP government. If we are illegal here, then why did they give us such facilities?” asked Rahman.

‘Only houses demolished, not public properties’

When contacted, Darrang deputy commissioner Prabhati Thaosen said the government will study and look at how so many state-sponsored facilities came up in Dhalpur.

“All that was done earlier. As per government policy, what is to be done with these schools and government institutions will be done according to the rules. These will be shifted as per rules,” she added.

On the claim that toilets and PMGAY houses were built in the last five years also, Thaosen said, “That will be looked into. We will study all these things after all this (trouble over eviction) is over. We will have to survey the whole thing and later we will decide accordingly.”

Rafikul Islam, a teacher at Paschim Chuba Lower Primary School run by the government, said his house was demolished but the school building near his home was not touched.

“The officials who came for eviction said they will not demolish public properties as of now. What logic is this? The school is also situated on the encroached land….but only my house was demolished? That means my house could have also been saved,” he said.

Thaosen, on her part, said the administration has just “completed the eviction” from the disputed land and many works are “left to be done”.

Asked if any irregularity had been committed as government facilities were provided to “illegal settlers”, Thaosen said, “That I cannot comment on right now. I will take up the issue with the government.”

Ali alleged the government was trying to “communalise” the eviction drive.

“They have demolished four mosques, two madrassas, one public kabarstan and more than 10 personal kabarstans. Why is the government targeting our religious faith repeatedly?” he asked.

Under the ambitious Gorukhuti agriculture project, for whose execution the eviction drive was conducted, the Assam government has allocated Rs 9.60 crore in the current budget to implement modern farming techniques and scientific animal rearing practices across 77,420 bighas of land in Sipajhar area.