Gogoi has been charged of “waging war against the state” by urging people at a public rally to pick up guns. 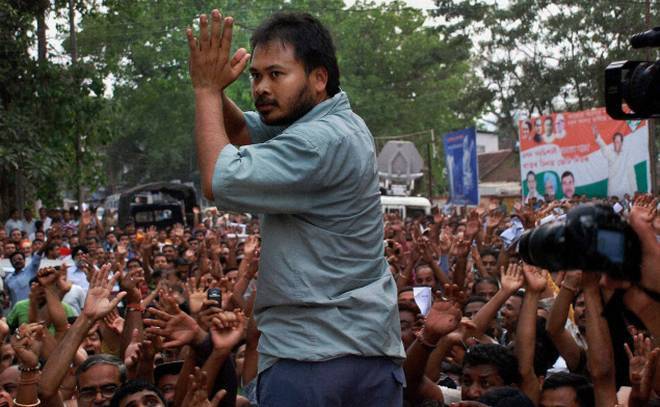 Gogoi, leader of the popular Krishak Mukti Sangram Samiti (KMSS), was detained by the Assam police on September 25 under the NSA. As per section 9 of the Act, a person arrested under it would be tried by an advisory board formed by the appropriate government consisting of three persons “who are, or have been or are qualified to be appointed as judges of a high court”. If the board reports that there is sufficient cause for detention, the appropriate government may confirm the detention order.

In such a case, Gogoi would have to approach the Gauhati high court for relief.

A vocal opponent of the ruling BJP government and its ideological fount, the Rashtriya Swayamsevak Sangh (RSS), Gogoi has been charged of “waging war against the state” by urging people at a public rally to pick up guns. He, along with a few others, spoke at the rally held in Moran town in upper Assam to oppose the Narendra Modi government’s decision to grant citizenship to Hindu Bangladeshis in violation of the Assam Accord. The Accord was signed in 1985 between the then Central government and student leaders spearheading a popular agitation in the state against undocumented immigrants from Bangladesh.

Though Gogoi was first picked up by the Dibrugarh police on September 13 on charges of sedition, the state government rearrested him 12 days later under the NSA when he was being taken to a local court for a hearing of his bail application.

Gogoi was first picked up by the Dibrugarh police on September 13 on charges of sedition. Credit: PTI

Local media reports said the three-member board met twice so far – on October 20 and 22. The board is set to meet on October 25 and 27 and the final verdict on Gogoi is likely to be pronounced on November 3. Reports said the investigating officers of all the 12 cases registered against Gogoi in different districts of the state to substantiate the charge under NSA by the Nagaon police have been asked to present themselves before the board with case diaries and other relevant documents.

Meanwhile, Gogoi can move his bail application in the Gauhati high court. Also, if he doesn’t want to be present before the board, he could do so by giving it in writing.

Speaking to The Wire, KMSS leader Bhasko De Saikia said, “Today marks one month of Gogoi’s arrest. As per the NSA, the advisory committee should submit its report within 49 days, which will be November 12. We have seen some media reports saying the final verdict will be on November 3 but there is neither any official announcement about the date nor any intimation to us or his family. What we know is that the board has met twice so far and will ask Gogoi to be produced before it.”

Saikia added, “What is of concern to us is that he has not been given the facilities that a political prisoner held under the NSA should have been, such as regular medical check-up. In spite of his complaint for 15-20 days of skin rashes and problems due to diabetes, he was not taken for a medical examination. On October 20, he was taken to the Dibrugarh Medical College and Hospital for a test only because he was to be produced before the sessions court on October 23″.

Saikia said nobody has been allowed to meet Gogoi in jail so far. “One needs a written permission from the district administration to meet a person held under the NSA. We have submitted an application in this regard but has been refused to us.”

Gogoi has since been lodged in Dibrugarh jail.