As Migrants Depart, Sena Sees Opportunity for 'Manoos'. Is That Feasible?

While the party may attempt to push its long-standing demand, it will have to acknowledge that it is the migrants who keep Mumbai ticking.

Mumbai: The industries minister of Maharashtra, Subhash Desai, has reportedly said that the exodus of migrants from the state during the coronavirus lockdown presents an opportunity for Marathi manoos because thousands of jobs will now be available. He also said a board would be set up where local youngsters can register for employment opportunities.

The Uddhav Thackeray government sees this as a chance to push its long-standing ‘sons of the soil’ agenda. However logical this sounds, it is not going to be so simple. Indeed, the statement hides anxiety about the disappearance of tens of thousands, perhaps lakhs of workers from UP, Bihar, Jharkhand and other states.

The Shiv Sena has long fought against ‘outsiders’ who it claims take away jobs which could go to Maharashtrians (interpreted as Marathi speakers).

The party was set up in 1967 on that very platform and began by targeting ‘south Indians’ – called by many pejorative names, such as lungiwala – and Bal Thackeray, Uddhav’s father, used to publish lists from the phone directory of surnames of Tamilians and others. Udupi hotels were ransacked and companies warned that they should give a hefty quota of clerical jobs to Maharashtrians.

Government and municipal jobs were opened up for locals. In addition, other big employers such as textile mills, in any case, hired Maharashtrians and jobs often went from father to son. But the closure of the mills after the 1982-83 strike and the limits of government employment meant that many manoos found themselves with no job possibilities. 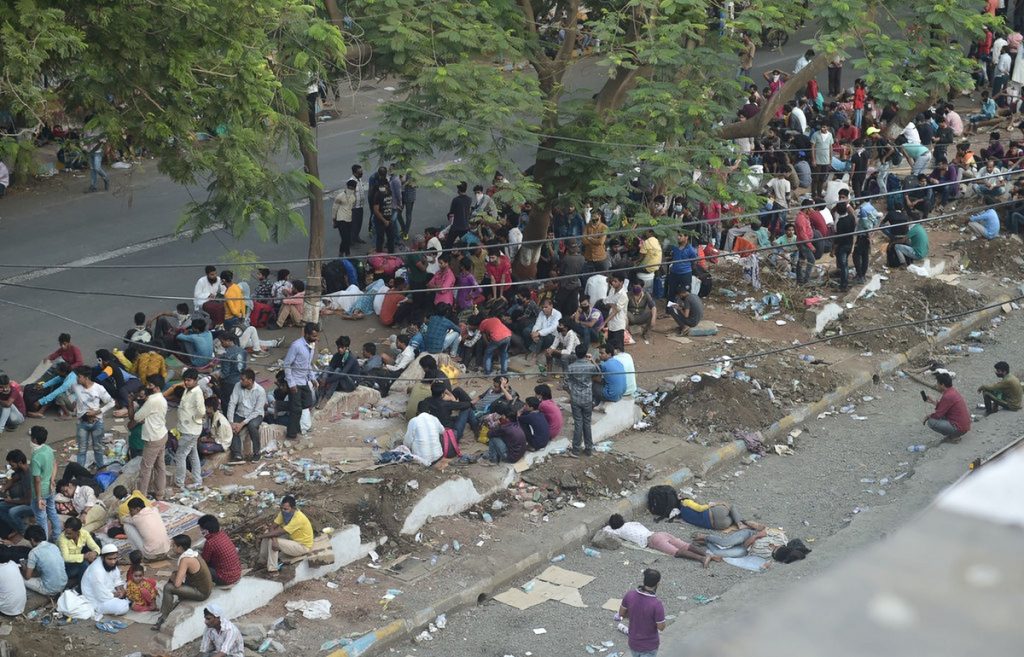 Migrants wait along the Mumbai-Nashik highway to reach their native places, May 19, 2020. Photo: PTI/Mitesh Bhuvad

Once again, the anti-outsider rhetoric flared up but now, Muslims became the new target as Thackeray saw the advantages of pushing Hindutva. But, prejudice was also rising against Biharis and uttar Bharatiyas. Raj Thackeray, after breaking away from the uncle, began by speaking out against ‘north Indian outsiders’ and his followers, looking to distinguish themselves from the Shiv Sena, beat up a few taxi drivers and vendors.

When opportunities emerged in the aftermath of liberalisation, there were no takers for anti-migrant propaganda because there were jobs to be had. Suddenly, anti-outsider rhetoric looked archaic.

But, Maharashtrians, with their better standards of education, were only interested in jobs in the government, banks, offices or in the creative fields and in the past have shown indifference, even disdain for working-class jobs. Few Marathi manoos wanted to become security guards, taxi drivers, waiters, cooks, vegetable vendors and, most crucially, construction workers. Nor did they want to work in the sweatshops of Dharavi, tailoring garments, another sector which provides substantial employment.

These were filled by workers from not just Bihar and UP but also from the Northeast. Most security guards outside buildings are from the north Indian states, working gruelling shifts and often working other jobs. Upscale restaurants have serving staff from the Northeast. At the lower end, any Udupi restaurant owners will admit that the man flipping dosas in the kitchen is from Jharkhand. Bengali speakers are in the garment business and construction workers come from different parts of India. The same goes for taxi drivers and shop assistants.

Mumbai has little to no manufacturing and though there are units, big and small, in Pune and beyond, training large batches of newcomers is going to be a time-consuming process.

In short, with all the good intentions, and political backing, it is going to be a difficult task to replace the vast numbers of migrants who have left and are not likely to come back for a long time, if at all. For someone from Bihar, who came all the way to Mumbai, worked hard for a small salary, and found his employer deserting him at a crucial time (many have not received wages), and then trudged back on the highways in the sweltering heat, the incentive to return is quite low.

This is going to have a devastating effect on the economy of the state. Uddhav Thackeray may outwardly present this as an opportunity, and it well may turn out to be, but he knows that it is the migrants who keep Mumbai ticking. Prominent builders and developers privately express their fear that their projects will slow down in a big way. The sector is already in a crisis and apartment sales are at rock bottom – if activity doesn’t pick up again, many firms may not survive.

The other informal sectors will also face a crisis and while theoretically, Maharashtrian workers could become available, how many of them will want those jobs? A restaurant shutting here or a unit closing there may not make big news, but aggregated, it will amount to substantial loss of revenue. In addition, job opportunities will become even scarcer. People play a game of chess in Dharavi during the coronavirus disease outbreak in Mumbai, April 10, 2020. Photo: Reuters/Francis Mascarenhas

One way out would be to declare that Mumbai is open for all comers and the government would do its best to facilitate a transition. There could be ways to help small businesses and also individual small entrepreneurs. But this will be a political impossibility and a hard pill for the Shiv Sena to swallow. However sensible it sounds and even though it will be beneficial for the state, the Sena will calculate that its core followers would not be able to accept it. This is the dilemma that Uddhav Thackeray – running a coalition government – faces. The Congress and the NCP too may privately understand the need for migrants to keep the economy going, but will not be able to publicly declare it.

Mumbai has a centuries-old tradition of welcoming migrants. When the East India Company took over the swampy islands that constituted Bombay, the officials sent out word to Gujarat, welcoming people to come and settle here, assuring them that there would be no attempt to interfere in their traditions or religious activities. Gujaratis, Kutchis, Muslims and most of all, Parsis, came, first in a trickle, then in waves. Other communities followed. The city is all about coming here with dreams and making it. Despite the Shiv Sena’s hard anti-migrant stand, those from other states (and even countries) have kept coming.

Now, many of them are leaving. And they are taking their labour, initiative and skills with them. Maharashtrians could certainly fill those jobs, but will they want to? The formal economy is likely to see a freeze in hiring and perhaps large scale layoffs. The choice will be between the informal sector and setting up businesses. It remains to be seen how many Maharashtrians take up those opportunities. Mumbai – and the rest of the state – will soon realise how much it needs those much-hated ‘outsiders’.