While activist Ebo Mili was arrested for painting an anti-dam slogan on a government mural, artist Nilim Mahanta was allegedly arrested over a mural which the Assam government had initially given him permission to make. 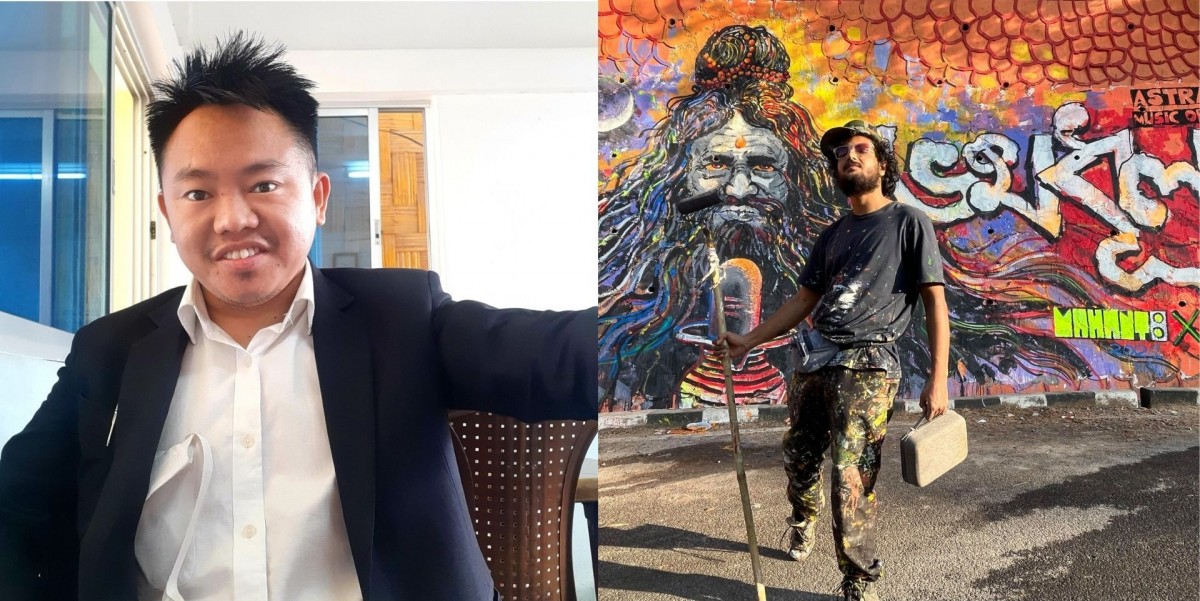 New Delhi: A young lawyer and human rights activist from Arunachal Pradesh and a well-known graffiti artist from Assam were taken into custody by the Arunachal Pradesh Police on Sunday, March 27, for their protest artwork, drawn on the boundary walls of two state government buildings in state capital Itanagar.

As per local news reports, the lawyer-activist from Arunachal, Ebo Mili, was the first to be taken into custody on the charge of defacing a state government-sponsored mural – promoting dams – drawn on the boundary wall of the state assembly and the Secretariat building. The murals, together termed the ‘Wall of Harmony’, were a part of the Bharatiya Janata Party (BJP) government’s celebration of 50 years of Arunachal Pradesh’s journey. The varied subjects of the murals were meant to be a showcase of the northeastern state’s heritage and its development trajectory.

According to a local artist, Mili drew “a protest graffito over the government sponsored mural promoting dams in Arunachal, and wrote the slogan: ‘No More Dams’.”

“While the government was promoting the construction of big dams in the state as part of development, there are a lot of people in the state who don’t support it. Aruanchal is an ecologically sensitive state. The work of a graffiti artist is essentially protest work and that is what Ebo did. It was not to dishonour the work of another artist,” the artist added.

It may be mentioned here that Arunachal chief minister Pema Khandu’s family, involved in the construction business in the state, has been part of controversies linked to the building of dams in spite of public protests.

Also read: The Chinese Response Isn’t the Only Reason the Dalai Lama’s Visit to Tawang Is Significant

The murals, drawn with taxpayer funds on the boundary wall of the Secretariat, were done by a set of local artists in collaboration with others from West Bengal, Delhi and Gujarat.

Local news reports said that hours after Mili was taken into custody, a team of Arunachal Police travelled to Lakhimpur in Assam, situated next to the Arunachal’s Papum Pare district, to arrest well-known graffiti artist, Nilim Mahanta. According to Assam-based news reports, Mahanta was picked up from his home on March 27 with help from Assam Police.

However, The Wire has learnt that Mahanta was most likely picked up by the police for painting a life-size graffito on a wall of the District Commissioner’s office at Itanagar as part of the worldwide initiative, Global Climate Strike, carried out at multiple locations across countries on March 25. 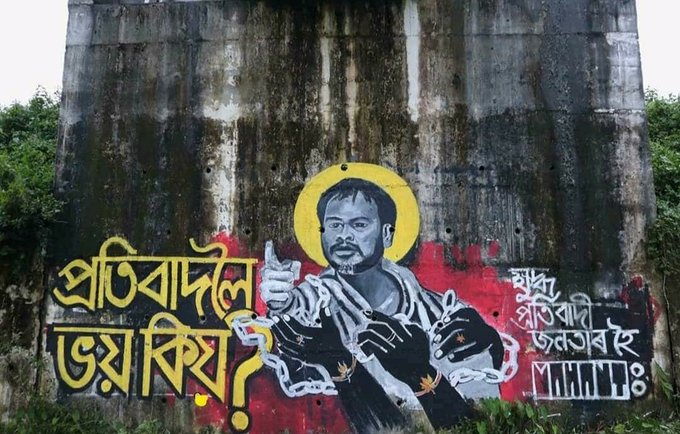 A graffito by Nilim Mahanta advocating for the release of activist Akhil Gogoi. Photo: Twitter/ BijoyShankarBha4

An Itanagar-based artist who supported the global initiative told this correspondent, on condition of anonymity, “Ebo Mili was the person who drew a graffiti over the pro-dam mural on the Secretariat wall while Mahanta was part of an informal forum of wall artistes who got together to take part in the Global Climate Strike at Itanagar.”

“Mahanta drew a life-size sketch of Arunachal’s state animal, the Mithun, grazing on a heap of plastic bottles with the slogan ‘Plastic is the new grass’. The mural was drawn with permission from the state administration as part of the global initiative against climate change,” the artist said.

Hours before Mili was taken into custody by Arunachal Police, he tweeted a video clip of Mahanta’s mural, highlighting the slogan.

A local journalist, who didn’t want to be named, told The Wire, “The action against Mahanta must also be because it is a campaign promoted by global environmentalist Greta Thunberg. Perhaps the state government was not aware of it (earlier) and is now trying to save itself by putting the entire blame on the artist. The BJP had arrested young climate activist from Bangalore, Disha Ravi, who was linked to Thunberg, in 2021.”

Mahanta’s lawyer told the Assamese media that his family members have travelled to Itanagar to seek his bail, which would likely come up later today.

According to the Arunachal Times, the duo had been taken into custody in a case under Section 3 of the Prevention of Damage to Public Property Act, 1984. The report, quoting the police, said the protest logo of a fist with the slogan, ‘No More Dams’ was drawn around 2 am on March 27. Later in the day, Mili was detained, following which Mahanta was taken into custody, around 8:30 pm.

MIli and Mahanta were produced at a local court in Itanagar on March 28 and remanded to police custody for two days.

The Wire tried contacting Arunachal Pradesh Police for more information in the case but has not received any response yet.

Meanwhile, Arunachal Police’s action has created a sensation in both Arunachal and Assam, with outrage against the arrests coming from various quarters, including on social media.

“In a democracy, a citizen has the right to dissent. This right can’t be snatched by any government drunk on power. We put our demand on both the Arunachal and Assam governments to release artist Nilim Mahanta immediately,” one of his tweets read.

Mahanta has recurrently been in the news for his public art and graffiti in Assam.

Mili, a strong voice on human rights from Arunachal, too, was in the news in 2021 for taking on the BJP government’s failure to prioritise vaccinations for persons with disabilities. Based on his petition, the Arunachal bench of the Gauhati high court, in July 2021, had issued directives to the Khandu government to provide priority vaccinations to the disabled persons in the state.