In Poll-Bound Himachal, Disgruntled Apple Growers May Be a Stumbling Block for BJP

Apple growers have been protesting against the state government for hiking taxes on packaging material and fertilisers, and ‘exploitation’ by traders.

A protest by apple growers in Rohru, Shimla, on July 11. Photo: Author provided

Chandigarh: Apple growers, who play a vital role in the Himachal economy and also have a considerable political influence in at least 18-20 constituencies in the Shimla region, have become a bone of contention for the ruling Bharatiya Janata Party (BJP) ahead of the assembly polls in November.

Rising input costs have led to a massive drop in their income. For this, they have blamed the government for hiking taxes and ‘exploitation’ by traders.

Besides, heat wave and drought conditions this year have also damaged their crop, thereby fetching them far less rates in the open market due to stunting in the apple size and open cracks.

These factors have pushed them to protest against the BJP-ruled state government.

As many as 27 grower associations under the banner of Sanyukt Kisan Manch held protests at multiple locations in the state last week over government failure to protect the interest of apple growers.

It started with a protest in Rohru in Shimla district on July 11. 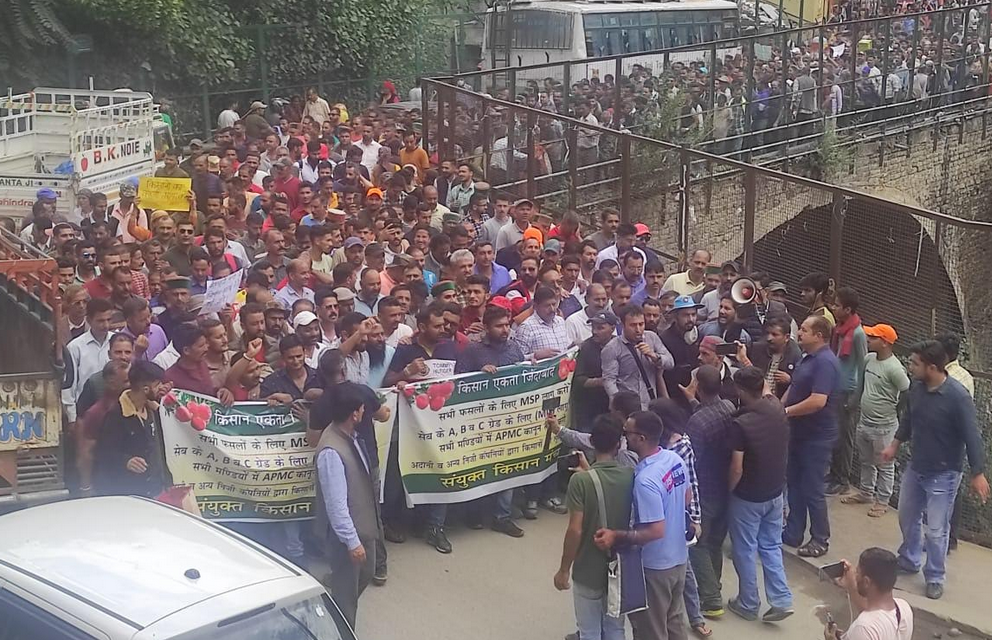 A protest by apple growers in Rohru, Shimla, on July 11. Photo: Author provided

On July 28, chief minister Jai Ram Thakur met with the Sanyukt Kisan Manch in Shimla and decided to constitute a committee to find solutions to their grievances.

Despite Thakur’s announcement, the apple growers decided not to cancel their scheduled gherao of the Himachal Secretariat in Shimla on August 5 over their key demands.

Several organisations have criticised the Thakur government for doing “too little, too late” as they felt that the new committee would not be able to provide any immediate financial relief to the growers.

Meanwhile, some apple growers have claimed that the state horticulture minister Mahender Singh did very little to help them.

Dimple Panjta, president of The Himalayan Society For Horticulture and Agriculture Development, a Rohru-based NGO consisting of a large number of apple growers, told The Wire that in the last four and half years of BJP rule, the horticulture department hardly took any constructive steps to help the growers.

“By the time the new committee would give its recommendations, the current apple season would already be over,” he said.

He asked, “Why the government was not proactive to look into the issues concerning Himachal Pradesh’s apple industry. Why does the government only wake up when people start protesting.”

Also read: Adani in the Eye of the Storm as Himachal Apple Prices Crash

Lokinder Bisht, who is the president of Himachal Progressive Growers Association, told The Wire that the apple industry in Himachal Pradesh is fragile, as it is highly influenced by market forces.

Bisht said in the last two years, the input cost of apple growers has almost doubled but the income level has not gone up at the same pace. In economics, there is a term called the law of diminishing returns, which applies to a phenomenon when investment in a particular area increases, but the rate of profit from that investment cannot continue to increase.

“This is precisely what we are facing today. Part of the problem is government policies and a lack of regulation,” he said.

He added that packaging material like cartons, trays and machinery equipment used in the apple industry should be kept in the lowest bracket of the goods and services tax (GST). However, the Union government hiked the GST on packaging material from 12% to 18%.

The hike was announced in October last year, but its impact was felt this year when market forces increased the rate of cartons, trays and other packaging material used in the apple industry. Apart from this, GST on fertiliser pesticide and fungicide was also hiked to 18%.

Bisht said that the state government recently announced a 6% subsidy on the purchase of cartons from the Himachal Pradesh Horticulture Produce Marketing and Processing Corporation (HPMC) from July 15. This was done to compensate for the 6% increase in the GST rate on cartons, he said.

But the irony is that carton rates of HPMC even after the 6% subsidy waiver is higher than open market rates.

Moreover, most of the growers have already bought the packaging material and many have placed orders from where they usually buy, he added.

“On the contrary, apple growers are not fetching proper rates for their produce. Every year the market opens with good prices, especially for premium varieties of apples. We have already witnessed the slump in the beginning of the season,” he said.

Ashutosh Rana, a member of the Sanyukt Kisan Manch, blamed it on the lack of regulated policies. The state government has no minimum support price-based procurement system. The state agencies buy only C-grade apples to make jams or apple juice. They offer just Rs 10 per kilogram. However, a grower spends around Rs 30-32 to grow one kilogram of apples.

Moreover, the rates of fertilisers or agriculture equipment by state market agencies like HPMC are much higher than market price.

“We want to ask the state government if the state marketing agencies are meant for the welfare of apple growers or are they money making machines. Earning profit at the peril of growers is unacceptable to all of us,” he added.

Added to climate change, apple growers are also facing unfavourable government policies. They want government support on their key demands, otherwise they will have a tough time in near future, he added.

The Sanyukt Kisan Manch has submitted a memorandum to the chief minister which mentioned as many as 20 demands in detail.

Among the key demands is the waiver of the GST on packaging material like wooden cartons and trays used in the apple industry. Besides, it has asked the government to introduce an MSP for all A, B and C level varieties of apple to regulate the market.

Last year, there was a huge uproar among apple growers when Adani farms, who is the biggest purchaser of apples in Himachal Pradesh’s mandis, announced much lower prices of the premium apple varieties, thereby disturbing the entire market.

Their other demands included an increase in the import duty of apples coming from Iran and other foreign countries. They claimed the import of apples has eaten into the profit margin of local growers.

They also sought subsidies from the state on the purchase of agriculture equipment, fertilisers, etc. in order to bring down their increasing input cost.

The Sanyukt Kisan Manch has also asked the state to constitute a horticulture board for the welfare of horticulturists. The chief minister has assured the growers that the government would consider this demand.

They have also asked the state to waive off collection of taxes or charges levied on the apple growers at various barriers.

Why is it important for the BJP to pacify apple growers

Apple growers of Himachal Pradesh have a considerable influence in districts like Kinnaur, Shimla, Sirmaur, Solan, Kullu and even parts of Chamba.

Therefore, the saffron party needs to pacify the growers at the earliest before their protests spoil the BJP’s chances of making a comeback in the state. This is important because no political party in Himachal Pradesh has won the polls for the second time since 1985.

Odds are already stacked against the Thakur government over a number of issues, including allegations of non-performance and factionalism. The protest by the apple growers have now added to their troubles.

Meanwhile, the Congress has attacked the BJP for ignoring the apple growers since the party formed the government five years ago.

Congress leader of opposition Mukesh Agnihotri told The Wire that the current BJP government has failed to provide welfare schemes to apple growers. Last time when Prime Minister Narendra Modi had come here, he had promised that his government will especially focus on the apple growers; however, their issues remain unresolved to this date.

“Growers have always benefited from the Congress government policies. We are again duty bound to ensure that once we form the government here, all their issues will be sorted out. We will officially release our blueprint for the welfare of apple growers and other horticulturists before the election,” he said.