The Centre's decision on 100% disinvestment in Rashtriya Ispat Nigam Limited, the corporate entity of Visakhapatnam Steel Plant, has triggered massive protests in the state. 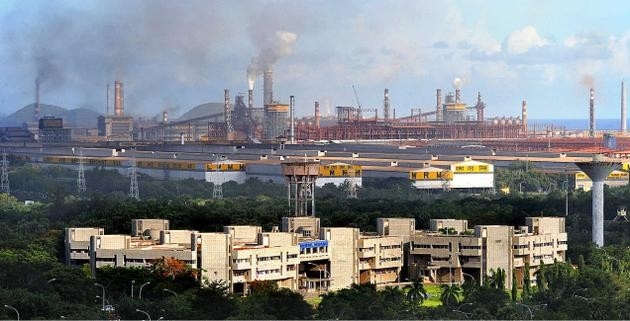 In a written reply to a question raised by YSR Congress MP Vijayasai Reddy in the Rajya Sabha, the finance minister declared that the central government will divest 100% of its equity in the RINL along with the the PSU’s stakes in subsidiaries and joint ventures through strategic disinvestment to “improve its productivity and efficiency”.

The NDA government’s disinvestment move unveils its plans for sale of the steel plant to private entities.

Visakhapatnam, located in the north coastal Andhra region, got the sobriquet “steel city” for hosting the steel plant. The Visakha Ukku Parirakshana Committee was constituted with all the 36 trade unions representing the plant workers to protest against the Centre’s decision to privatise the PSU. The relay fasts launched by the joint action committee (JAC) entered the 29th day on Saturday.

Narsing Rao, chairman of the JAC, told The Wire that the committee has decided to continue the agitation with a long-term approach by enlisting support from over 20 national trade unions on the lines of the farmers’ protests in Delhi. “The agitation will go on till the NDA government withdraws its privatisation plans,” he added.

A bandh was reorganised under the aegis of the JAC which drew support even from the ruling YSR Congress. The protesters received support from the neighbouring Telangana’s IT minister and chief minister K. Chandrashekar Rao’s son K.T. Rama Rao. Rama Rao, better known as KTR, rose above the inter-state sibling clashes and offered to join the ‘save steel plant’ agitation. Instantly, he was offered palabhishekam by the striking workers of the steel plant.

“It’s the question of the sentiment of Andhra people. There is a need to revive the plant,” the chief minister stated in his letter to the prime minister. Close on the heels, leader of opposition N. Chandrababu Naidu of the Telugu Desam Party (TDP) also wished to join the all-party delegation under the leadership of Jaganmohan Reddy.

TDP’s former minister Ganta Srinivasa Rao, representing Bhimili in Visakhapatnam district, tendered his resignation as an MLA and took a plunge into the agitation. His resignation has brought the YSRC lawmakers representing Uttarandhra region under pressure from the opposition parties to renounce their positions too for the cause of the steel plant. After the state’s bifurcation in 2014, the NDA regime had also rubbed the people of the Uttarandhra region the wrong way by not implementing its promise to set up a special railway zone made under the AP Reorganisation Act.

‘Save Vizag Steel Plant’ rally against the privatisation of the Vizag steel plant in Visakhapatnam. Photo: PTI

Vice-president of India M. Venkaiah Naidu, who was then a student of Andhra University in Visakhapatnam, took lead in the agitation as an activist of the BJP’s front organisation Akhil Bharatiya Vidyarthi Parishad. The opposition parties, recalling the fighting spirit he demonstrated in that agitation, asked Naidu to use his good offices to save the steel plant. Then Prime Minister Indira Gandhi finally agreed to lay foundation for the plant in Visakhapatnam in 1966 in keeping with the sentiment with a government’s equity of Rs 4,892 crore.

M.N. Dastur and Company recommended the Union government to allot four and five blocks of Bailadila Iron Ore at Kirandul Complex in Odisha as captive mines located 450 km away from the Visakhapatnam Steel Plant. The government acquired a little over 22,000 acres of farm lands from 64 villages on the sea coast for the steel plant to come up. But the recommendations for captive mines failed to become a reality which is the reason for the RINL failing to survive in the domestic and international steel market, asserted the JAC chairman.

In 1991, the steel plant became operational with an installed capacity of 33 million tonne, employing 6,000 people.

On February 10, Union Minister for Steel Dharmendra Pradhan went on record in the Rajya Sabha favouring South Korean company POSCO to establish a steel plant on the RINL’s lands. Replying to a question raised by YSR Congress MP Vijayasai Reddy, the minister stated, “The POSCO has evinced interest to set up a steel plant on RINL’s land”.

Pradhan added, “Shareholding pattern has not been determined at this stage. However, as per MoU, POSCO wishes to have at least 50% of shareholding while the shareholding of RINL would be worked out on the basis of valuation of its contribution of the land for setting up of the plant.”

EAS Sarma, a local civil society member and retired IAS officer, while speaking with The Wire expressed his strong opposition to the government’s proposal to give up the RINL’s lands to a private entity. Sale of these lands to private companies is nothing but a breach of public trust and in violation of the statutory provisions under which the lands were acquired then by the government, Sarma contended.

Also read: Why This Is Not the Right Time To Allow Corporate Ownership in Indian Banks

Sale of steel plant for a song?

Satyanarayana Murthy, a spokesman of the AITUC (All India Trade Union Congress) which is part of the JAC, while speaking with The Wire accused the NDA government of branding the RINL as a loss-making unit before putting it up for sale to private players. The RINL’s outstanding bank dues as of now stand at Rs 22,000 crore, of which Rs 12,000 crore is raised to execute its expansion plans, which could be converted into government’s equity and save the plant from privatisation, he said.

The RINL’s net worth is shown as Rs 1,135 crore and is put up for sale for around Rs 30,000 crore. But the RINL’s lands alone are worth Rs 1.1 lakh crore. Its lands, machinery, township and reservoirs put together cost anything not less than Rs 2 lakh crore. It is a clear conspiracy of the government to hand the RINL to private entities for a song by branding it a loss-making unit, Murthy alleged.

The experience of the Hindustan Zinc Ltd (HZL)’s smelter unit, located in the vicinity of the steel plant, divested to a private company two decades ago, left a bitter taste for the locals. According to reports, the unit remained shut without any adequate compensation paid by the company to those thrown out of employment. The management entrusted with the PSU plant is accused of diverting 360 acres of land acquired for it from farmers for real estate business.

During NDA rule, as part of disinvestment, HZL’s equity was sold to Sterlite Industries Ltd. The disinvestment was made in favour of Sterlite up to 65% in three instalments, leaving the balance to the Government of India, financial institutions and the public. Later, production at the smelter unit was stopped as the management found bringing raw material from Rajasthan and using it at the local smelter unviable due to increasing input and freight costs, said a report in The Hindu BusinessLine.

Citing this instance, Sarma sought to pick holes in the claims of the finance minister on the efficiency of the private entities to revive the so-called sick or loss-making units under public sector.