The chief minister was miffed with Ramesh Kumar's move to postpone local body elections. The ordinance reduced the state election commissioner's term to three years from five and may face legal scrutiny. Vijayawada: The bitter showdown between the state legislature and the state election commissioner (SEC) over conduct of elections to urban and rural bodies in Andhra Pradesh culminated with the latter’s unceremonious exit on Friday.

Amidst efforts to tackle the COVID-19 pandemic, the Y.S. Jagan Mohan Reddy government seems to have taken precious time to hurriedly promulgate an ordinance late on Friday, clearing the way for Ramesh Kumar’s exit. The government also simultaneously released a couple of GOs, apart from the promulgation of the ordinance, to formalise his removal.

The ordinance downsized the term of office of the SEC from five years to three years through an amendment to the Andhra Pradesh Panchayat Raj Act, 1994. It is obviously intended to allow the YSR Congress government to show Ramesh Kumar the door, as he has already completed three years in office. The ordinance comes into force with “immediate effect”.

One of the government orders issued provides for the appointment of a retired high court judge as the SEC, replacing the present procedure which only allows the appointment of an IAS officer. Another government order stated, “In pursuance of Ordinance No.5 of 2020, dated: 10-04-2020, Dr N. Ramesh Kumar, IAS, (Retd), the incumbent State Election Commissioner, ceases to hold the office of State Election Commissioner on and with effect from 10-04-2020”.

Legal experts feel the ordinance is ultra vires and in contravention of the spirit of the Article 243K(4) of the Constitution in relation to the panchayats. Ravi Shankar Jandhyala, a senior advocate in the high court of Telangana, told The Wire that Ramesh Kumar has got a fair chance of continuing in office up to his full five-year term as the ordinance gives him enough room for a legal battle.

If the state executive treats the SEC, a constitutional office, like any government servant by downsizing the term of office on unfounded grounds, it only amounts to defeating the very objective of introducing the panchayat raj system with the creation of the State Election Commission, Ravi Shankar asserted. Experts also say the ordinance could not be enforced retrospectively to the convenience of the executive, with the sole purpose of sacking the SEC. 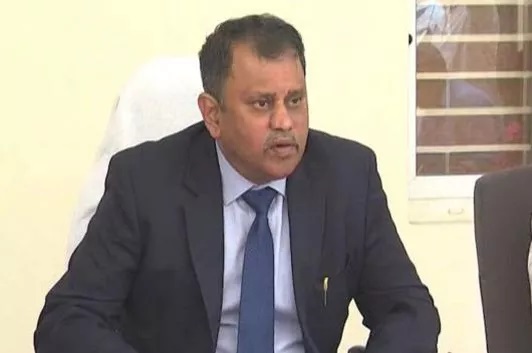 Ramesh Kumar, a 1982 batch IAS officer, was appointed as Andhra Pradesh’s SEC nearly four years ago, during the regime of the Telugu Desam Party (TDP). Ramesh Kumar’s removal from office cannot be seen as an isolated case in the backdrop of a slew of top bureaucrats allegedly tasting vindictiveness during Jagan’s government. Ramesh’ removal comes close on the heels of his decision to defer the local body elections against the wish of chief minister Jagan.

The elections had been scheduled to be held on March 31. But the SEC deferred the polls indefinitely, citing the coronavirus pandemic threat. Ramesh Kumar transferred collectors and superintendents of police in some districts, citing their alleged partisan attitude favouring the ruling YSR Congress that prevented the opposition parties from even filing nominations in many places.

Deferment of elections triggered an ugly fight between the state government and the SEC. Jagan depicted Ramesh Kumar as covertly supporting his rival N. Chandrababu Naidu, linking their caste affiliation. Jagan Reddy expressed anguish that the state would forego the Central grants of Rs 5,000 crore because of the SEC’s failure to hold the local body elections in time. His government even moved the Supreme Court, challenging the SEC’s decision, but was rebuffed by the top court.

Analyst K. Nageswar said the timing of the ordinance to remove Ramesh Kumar, when the state is under the grip of the threat posed by the coronavirus, points to ‘mala fide intentions’ of the Jagan regime. It is obvious that the removal of the SEC is not in the purview of the state government and hence the ordinance was issued, he added.

Jagan’s previous row with a bureaucrat

It is not the first time that Jagan had tread on the toes of senior bureaucrats since he assumed office 10 months ago. Reddy was accused of axing chief secretary L.V. Subramanyam, allegedly for not falling in line. Subramanyam, a 1983 batch IAS officer who was previously considered close to Jagan and his father, former CM Y.S. Rajasekhara Reddy, was removed as chief secretary through an order issued by Pravin Prakash, a subordinate officer who is principal secretary in the Chief Minister’s Office.

The 48-year-old Jagan has been accused of displaying intolerance to dissent and getting “obsessed” with his rival Naidu. The chief minister has also batted for the Legislative Council to be scrapped, in yet another move seen by his critics as a pointer of his ‘intolerance’. The council, where the opposition TDP is in majority, put its foot down on Jagan’s plan to distributive capitals by sending the Bill to a select committee. Soon, Reddy moved for the dissolution of the council.

The YSR Congress government suspended A.B. Venkateswara Rao, a senior IPS officer of the additional director general rank, accusing him of extending “undue favours” to his son in the procurement of aerostat and unmanned aerial vehicle by the government. His suspension is linked to his alleged nexus with the TDP. Another IRS officer, Jasti Venkata Kishore, who opted for deputation on the Andhra Pradesh Economic Development Board (APEDP) during the TDP government, was suspended. But the Central Administrative Tribunal (CAT) revoked the suspension, allowing him to opt for Central service.