Though the Jagan government introduced many welfare schemes, the allocation to the education sector sees yet another decrease in percentage terms. 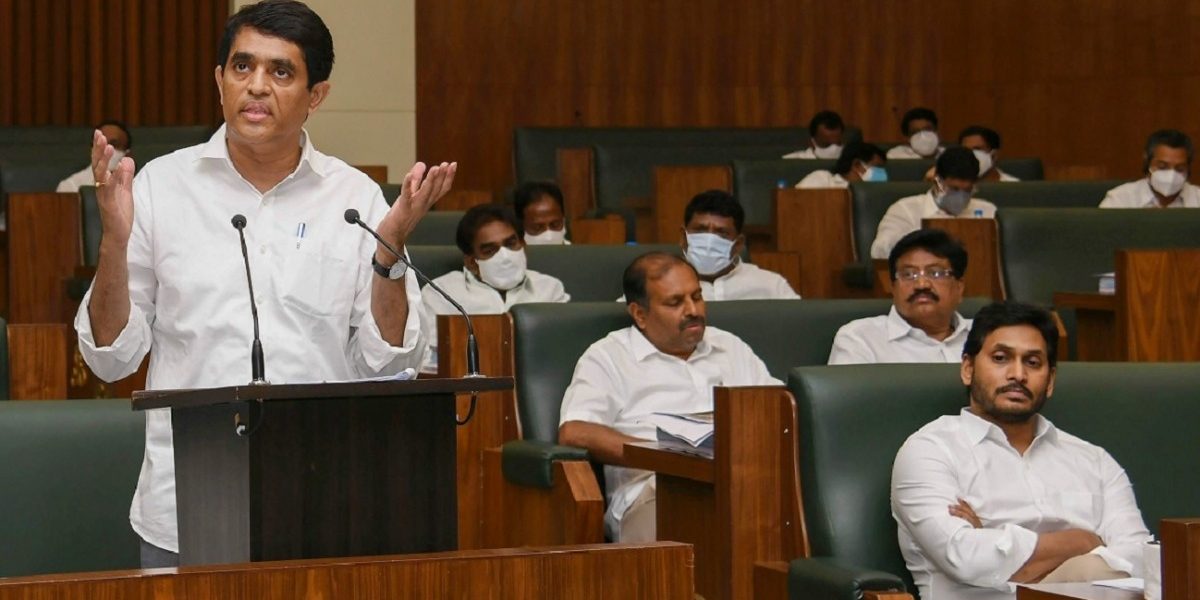 The Andhra Pradesh government presents its budget for 2021-22. Photo: PTI

Tirupati: The YSR Congress Party government in Andhra Pradesh recently presented its budget for 2021-22, allocating lesser than last year for education in percentage terms. Allocations to education in the state have been falling since 2015-16 as a percentage of the budget. This does not augur well for Andhra Pradesh, which has a literacy (66.4%) lower than that of Bihar (70.9 percent) as per the National Sample Survey 2017-18.

The presence of a good number of Telugu techies in the IT industry, many of whom are from the state, tends to cloud this harsh reality. The 2011 census pegs the state at the 31st rank in literacy among states and Union Territories. The state also falls short of its southern peers, all of which barring Karnataka allocate 15% of their budget for education. The national average of spending on education by all 29 states in the country is 15.9%.

The closing down of schools in the state as part of a rationalisation process had led to a mushrooming of private schools, even in rural areas, over the years. This resulted in making education a costly affair in Andhra Pradesh. The trend was more pronounced in urban areas under the previous Telugu Desam Party (TDP) government. The N. Chandrababu Naidu government had the owner of a noted corporate school and college chain, P. Narayana, as its municipal administration minister.

The YSR Congress’s promise to continue fee reimbursement for education was believed to be among the reasons which helped Y.S. Jagan Mohan Reddy garner 151 seats in the 175-member assembly. The Andhra Pradesh government has since announced welfare schemes like the Amma Vodi, Jagananna Vidya Deevena, Vasathi Deevena and Jagannna Vidya Kanuka.

Allocation for education in AP budget:

The Kothari Commission had recommended that 30% of state budgets and 10% of the Central government’s budget should be allocated for education. Delhi has allocated 25.2% of its budget for education, while Kerala has allocated more than the national average over the years.

The Amma Vodi scheme, which involves depositing Rs 15,000 into the bank accounts of mothers of school and intermediate students (Class XI and XI), attracted more students to government institutions due to job losses and financial troubles in the wake of the coronavirus pandemic. Critics had expressed anxiety that the scheme would lead to a fall in the number of students in government schools.

The schools which closed after the national lockdown in March, 2020 were opened only in November 2020. By then, private schools which could not pay salaries of teaching and non-teaching staff had shut shop. The uncertainty over their future led to students seeking admission in government schools and a subsequent shortage in textbooks. Officials said that as a result, a buffer stock of 5% of the text books printed in 2019-20 was maintained.

The fact that many small private schools had to shut shop is vouched for by N. Viswanatha Reddy, joint secretary of the Andhra Pradesh Private Schools Management Association (APPSMA). He said, “Nearly 10-30% of students from small private schools in urban areas and up to 50% in rural areas have shifted to government schools. If the pandemic continues, by June-July, 50% of these schools will close.” Middle class families would be at a loss if such schools close, as government schools are still unable to live up to the expectations of parents, he adds.

The government on its part facilitated the process of admissions into government schools by not insisting on a transfer certificate when they opened in November, 2020. The private school managements which are mandated to provide salaries and other emoluments to teachers in their institutions through out the year as per GO MS No. 1 passed in 1994 failed to do so. The governments failure to implement provisions of this order left these teachers in the lurch.

Even in normal circumstances, private teachers lose jobs at the whims and fancies of the management, says D. Ambedkar, president of the Private Teachers and Lecturers Union in AP. “Managements flout rules and do not enrol our names in the UDISE (Unified District Information System for Education) and don’t pay our provident fund or employees’ state insurance, and other benefits by enrolling less than 20 members in the system. Our problems found mention in the YSRCP manifesto and hence we even campaigned for it. But the party left us in the lurch during the pandemic,” he said.

Government schools continue to be besieged by problems

Sheikh Sabjee, the MLC from the teacher’s constituency of East and West Godavari districts, says that only 1/3rd of schools have been improved under the Naadu-Nedu programme. “It involves provision of amenities and infrastructure in the schools. Some schools face a shortage of classrooms, which is not addressed by the scheme. Many schools don’t have non-teaching staff like attenders and clerical work is being done by teachers,” he says.

Of the 674 mandals in the state, nearly 500 mandal education officer (MEO) posts are vacant. Headmasters are forced to doubling up as MEOs also. Of the 64 deputy education officer posts, 59 remain unfilled. Teachers’ unions peg the number of vacancies for teachers in the schools at 25,000.

Reliance on technology to monitor teachers in place of MEOs has led to wastage of time, says P. Chenga Reddy, a teacher at Vankireddygari Palli of Rompicherla mandal in Chittoor district. The teachers spend time marking their own and students attendance online using the Internet on their mobiles. Lack of proper connectivity adds to problems, he adds.

Adoption of CBSE syllabus in schools

With more students showing an interest in attempting all-India entrances to higher educational institutes over the years, schools which followed the CSBSE syllabus became more popular across the state. The state government has decided to adopt the CBSE syllabus from Class I to Class VII from the next academic year. The government plans to move Classes VIII to X to the CBSE syllabus by 2024.

The teachers’ unions say this decision has been taken without any discussion with the stakeholders, especially teachers.

P. Babu Reddy, general secretary of the Andhra Pradesh United Teachers Federation, says, “Education is a state subject and syllabus prepared by local experts would educate students about noted Telugu writers like Gurajada and Sri Sri. But that can’t be guaranteed if the syllabus is prepared by the Centre. Chances of a child studying about social reformers like Eswara Chandra Vidyasagar would be higher than our own Kandukuri Veereshalingam.” He also expressed concerns about the BJP led government changing textbooks to suit its agenda.

The move to adopt the CBSE syllabus is also being seen as a step to circumvent legal wrangles around Jagan’s plan to introduce English as the medium of education. This move was struck down by the AP high court. An appeal by the government in the Supreme Court is yet to be heard. The ruling and opposition parties had a high decibel debate on English as the medium of instruction even as they fail to allocate sufficient resources for education as a whole.

The GO. 77 issued by the Andhra Prades government downsized the fee reimbursement (rechristened as Jagananna Vidya Deevena) and Jaganna Vasathi Deevena to graduation courses only. It takes those studying post graduation courses like MSc, MA, MPharmacy, self-finance courses and even integrated degree courses like the five year LLB in private institutions out of the purview of these schemes.

Reports in regional media in 2019 had pegged the number of vacancies across the universities in the state at 62%. Over the past two years, it is safe to assume that they would have increased. A test conducted to fill these vacancies through the Andhra Pradesh Public Service Commission by the previous TDP government was embroiled in court cases and was cancelled after the YSRCP came to power. The state government has promised to fill them.

Reacting to the budget proposals, V. Balasubramanium, an MLC who represents the teachers constituency from Prakasam, Nellore and Chittoor districts, said, “The budget has failed the teachers also as there is no talk of a pay revision commission and the promise to repeal the contributory pension scheme has not been kept even after two years. Budget doesn’t have a long term vision and allocations have been made only to schemes. In line with this, while the entire higher education sector got Rs 1,973 crore, the Vidya Deevena (providing hostel facility for students) received Rs 2,223.15 crore.”

In fact, allocations to the higher education sector have fallen from Rs 2,276.97 crore last year to Rs 1,973.16 crore, a drop of Rs 303.81 crore. GO 57 issued by the government on October 30, 2020, reducing the fee by 30% in private and unaided schools and colleges. It did not succeed as the managements knocked on the doors of the high court which stayed the order. “Three committees formed for this purpose failed to rein in fees, even as private schools and colleges fleeced the parents,” says K. Prasanna Kumar, president of SFI, AP.