Andhra Pradesh: As COVID-19 Cases Rise, so Do Concerns About Lack of Equipment

Many districts also do not have testing laboratories, while doctors have complained about lack of PPE. Vijayawada: The government of Andhra Pradesh has gone full steam to combat the COVID-19 pandemic, as K.S. Jawahar Reddy, special chief secretary of the Department of Medical and Health on Tuesday confirmed that the state is now in the “initial stages” of community transmission.

Up to April 1, only 44 positive cases were reported in the state but the numbers surged to 348 with four fatal cases as on April 10, according to the government’s media bulletin. Initially, only persons with foreign travel history tested positive for the virus, after which some of their family members got infected.

After more than half a dozen people who had no history of foreign travel were found to have the viral infection, the government started looking at the possibility of stage-III transmission. If the Centre decides to lift the lockdown, the Andhra Pradesh government is planning to continue restrictions on movement in identified and potential hotspots.

The lack of sufficient labs for testing suspected COVID-19 cases stares at the nearly 1 lakh doctors, paramedics, nurses and the other health workers engaged in containing the virus. Kurnool in Rayalaseema region, is one of the hotspots in the state and witnessed a sudden rise of cases in the span of a week. It does not have a virology lab for testing COVID-19 cases. The samples are collected and referred either to the Sri Venkateswara Institute of Medical Sciences (SVIMS) in Tirupati or to Anantapur district for confirmation.

West Godavari, the native district of health minister Alla Kali Krishna Srinivas aka Nani, also does not have a testing lab. But officials recently declared a locality named Tangellamudi, on the suburbs of Eluru city as a “red zone” after it saw a spurt in COVID-19 cases. Samples are being sent to Vijayawada for confirmation. West Godavari registered 14 cases, six from Tangellamudi area alone.

There is only one lab in Visakhapatnam for the whole north coastal region, which includes three backward districts. A doctor, Sudhakar, heading an area hospital at Narsipatnam in the Agency area of Visakhapatnam, raised his voice over the lack of basic facilities, including personal protective equipment (PPE), face masks and kits. He was later suspended by the government, citing violation of conduct rules.

Many instances of doctors contracting infection

While the government has denied his claims, doctors who are treating COVID-19 patients are increasingly facing the risk of exposure. An orthopaedic doctor in Nellore is reportedly in critical condition after he was infected with the virus. District medical and health officer Rajyalakshmi was quoted in the media as saying that he could have contracted the infection from a patient he treated.

The infected orthopaedic was taken to a corporate hospital in the town for treatment, where nearly two dozen doctors and nurses have now been quarantined. It all speaks of the risk the health personnel are facing for want of PPE such as N95 face masks. 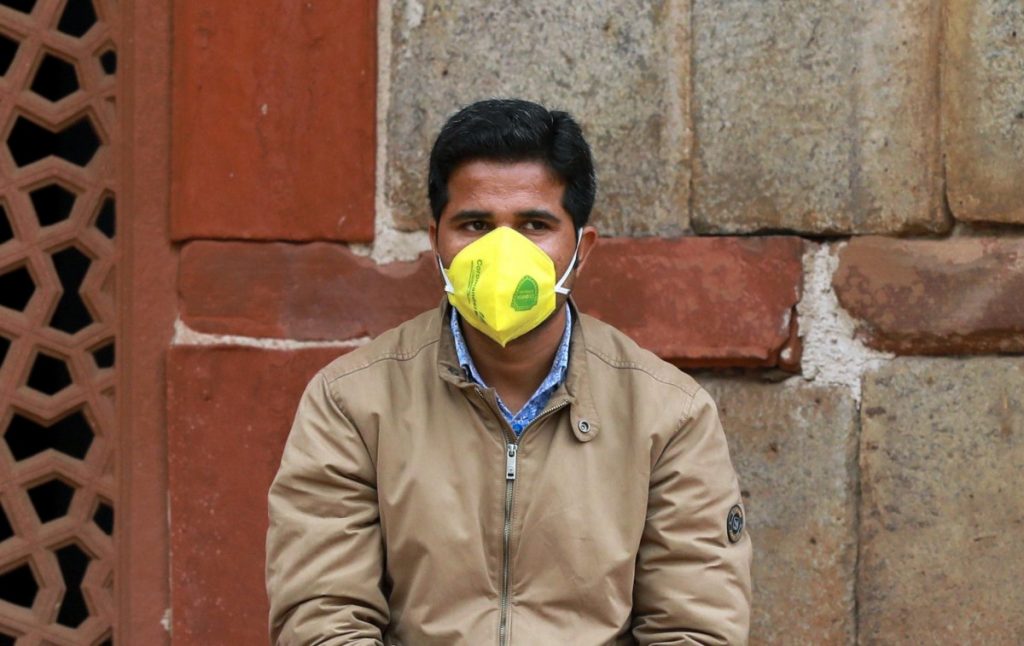 Man with a mask. Photo: Reuters

Confirmed cases of the viral infection have been shooting up across the state, after more than 1,000 people who returned from a religious gathering in Delhi’s Nizamuddin area. This has multiplied the task of screening for health personnel, especially when concerns exist about the lack of PPE.

To meet the challenge, the state government aims to carry out 2 lakh tests in a stipulated timeline. In an attempt to accomplish the task, the government has placed an order for procurement of 3 lakh rapid test kits from private manufacturers. Jawahar Reddy said the government could at present make available 12,000 PPEs, 20,000 N95 masks, 40 lakh gloves and 12 lakh surgical masks for the frontline health workers. Chief minister Y.S. Jagan Mohan Reddy on April 8 released testing kits indigenously manufactured by the AP Med Tech Zone in Visakhapatnam. The tech zone is aiming to produce 25,000 kits per day to meet the demand.

Dr C.L. Venkata Rao, former chairman of the state-run Swachandhra Mission, said six of the state’s 13 districts do not have virology labs for confirmation of COVID-19 cases. The Indian Council of Medical Research (ICMR) offers Rs 2 crore to medical colleges/hospitals if they are willing to set up labs. But the government could not utilise the facility for six districts, Venkata Rao pointed out.

Also Read: In India, Microbiologists Are Suddenly in Demand. Where Were They Until Now?

In an isolation ward in Prakasam district, patients went on a relay fast protesting the lack of basic facilities in the ward. Most isolation wards, it is complained, are bereft of cots, beds and bedsheets and toilets. Venkata Rao urged the government to rope in private companies to supply mobile toilets attached to the isolation wards.

Complaints like these are cause for concern when the state is in a position to mobilise many ideal locations for use as isolation wards. Engineering colleges, farm houses, resorts and cottages of the endowment department could be used as quarantine centres and COVID-19 treatment wards, Venkata Rao suggested. Fleets of RTC buses and vehicles run by private operators, colleges and schools could be converted into mobile health clinics, enabling them to roll into interior villages, he said.

According to the government, there are 1 lakh registered allopathic doctors, 1 lakh registered medical practitioners, 40,000 Ayurveda and Homeopathy doctors and 2 lakh nurses for deployment to handle the pandemic.