In Photos: Deserted Poll Booths in Anantnag as South Kashmir Goes to Vote

Security forces posing for a photograph at Ashajipora polling station. Out of 3,485 votes, only 15 were polled till 2 pm. Credit: Aamir Ali Bhat

Anantnag: On Tuesday, amid the unprecedented deployment of security forces and an internet shutdown, the restive Anantnag constituency in South Kashmir went to polls during the third phase of Lok Sabha elections. It was the first of the three-phase polling in the constituency which is spread over the Anantnag, Kulgam, Shopian and Pulwama districts and is one of the six parliamentary constituencies in the state.

Speaking to the media after polling ended, chief electoral officer of Jammu and Kashmir Shailendra Kumar said that only 13.61% polling was recorded in Anantnag, in contrast to the 39.37% voter turnout in 2014. The Election Commission of India had set up 714 polling stations in six polling segments of Bijbehara, Pahalgam, Shangus, Anantnag, Kokernag and Dooru. An additional 26 polling stations were set up outside the Valley – 21 in Jammu, four in Delhi and one in Udhampur – for Kashmiri migrant voters. 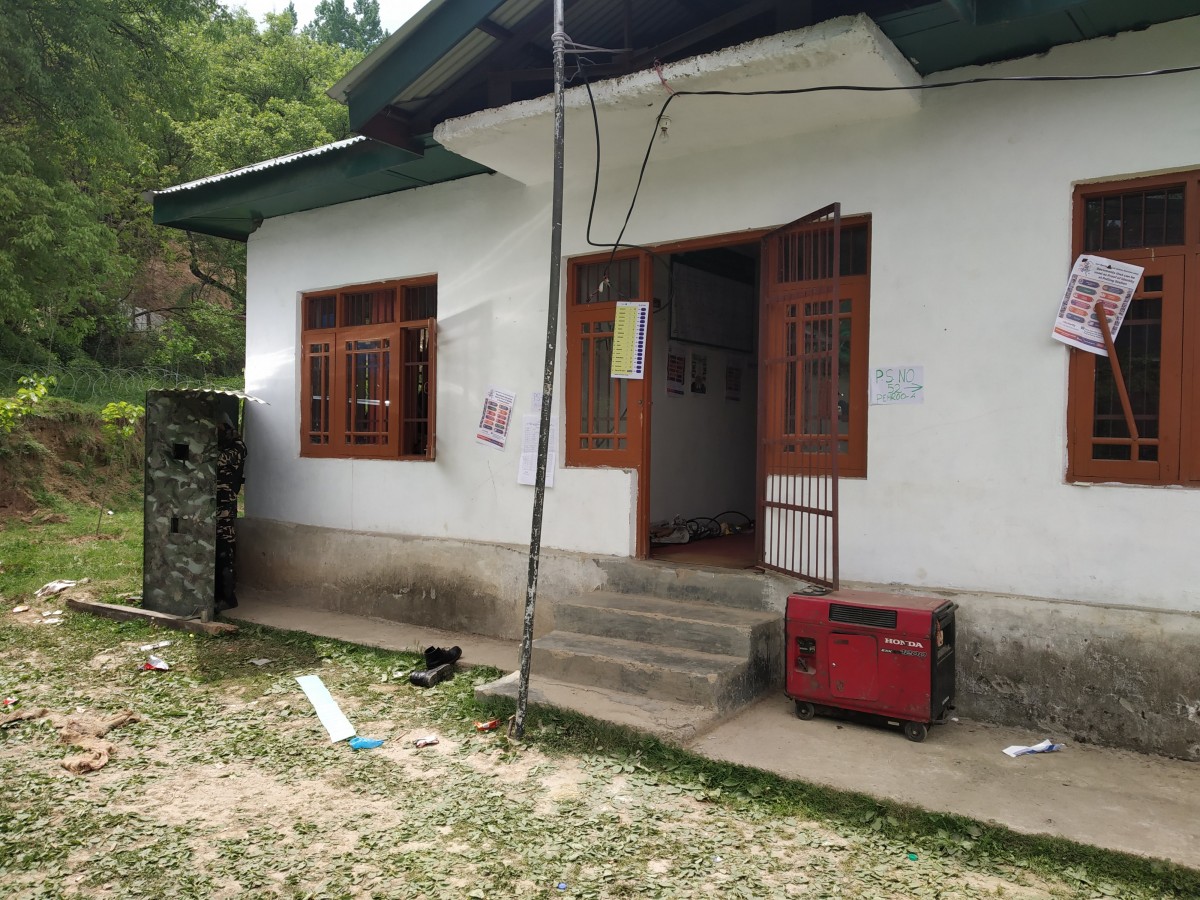 This polling booth in the Sarnal area witnessed only three votes being cast till noon. Credit: Aamir Ali Bhat 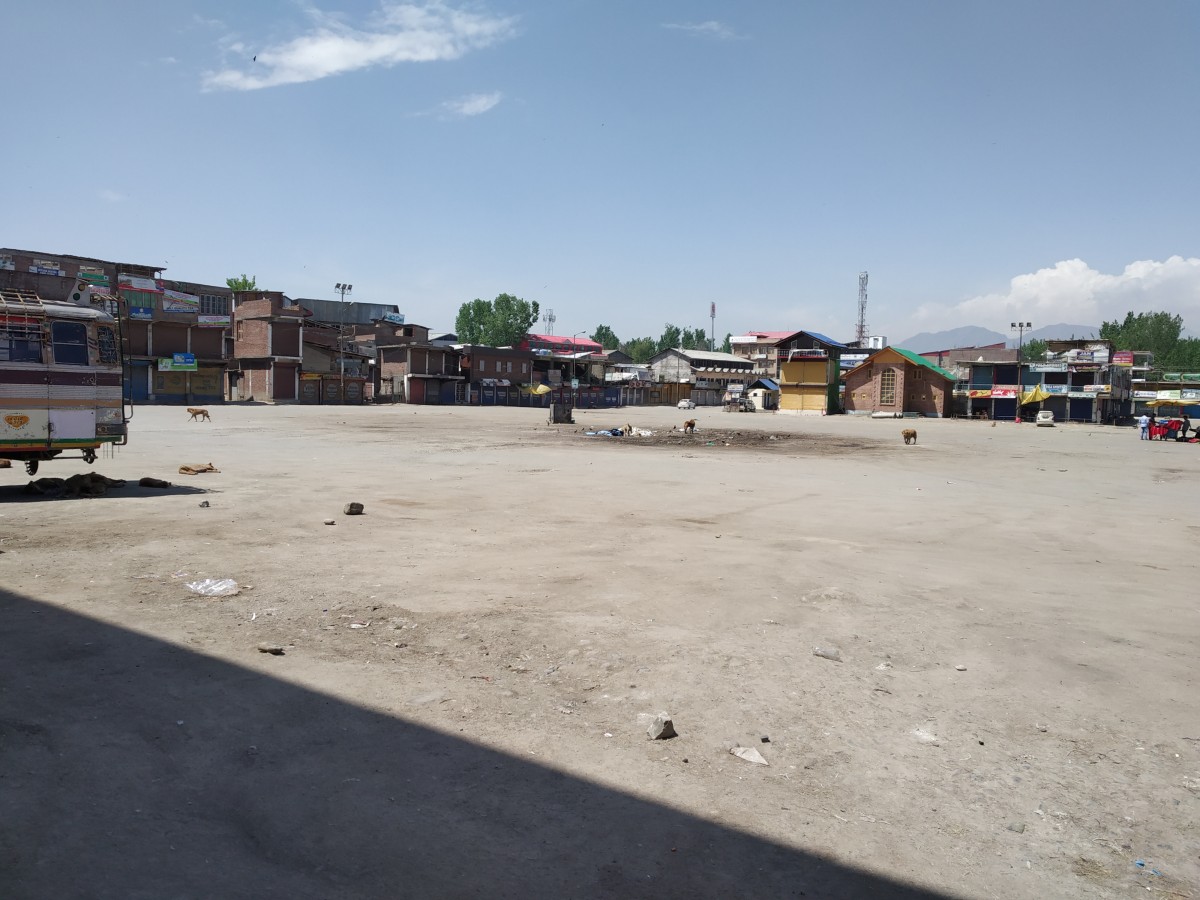 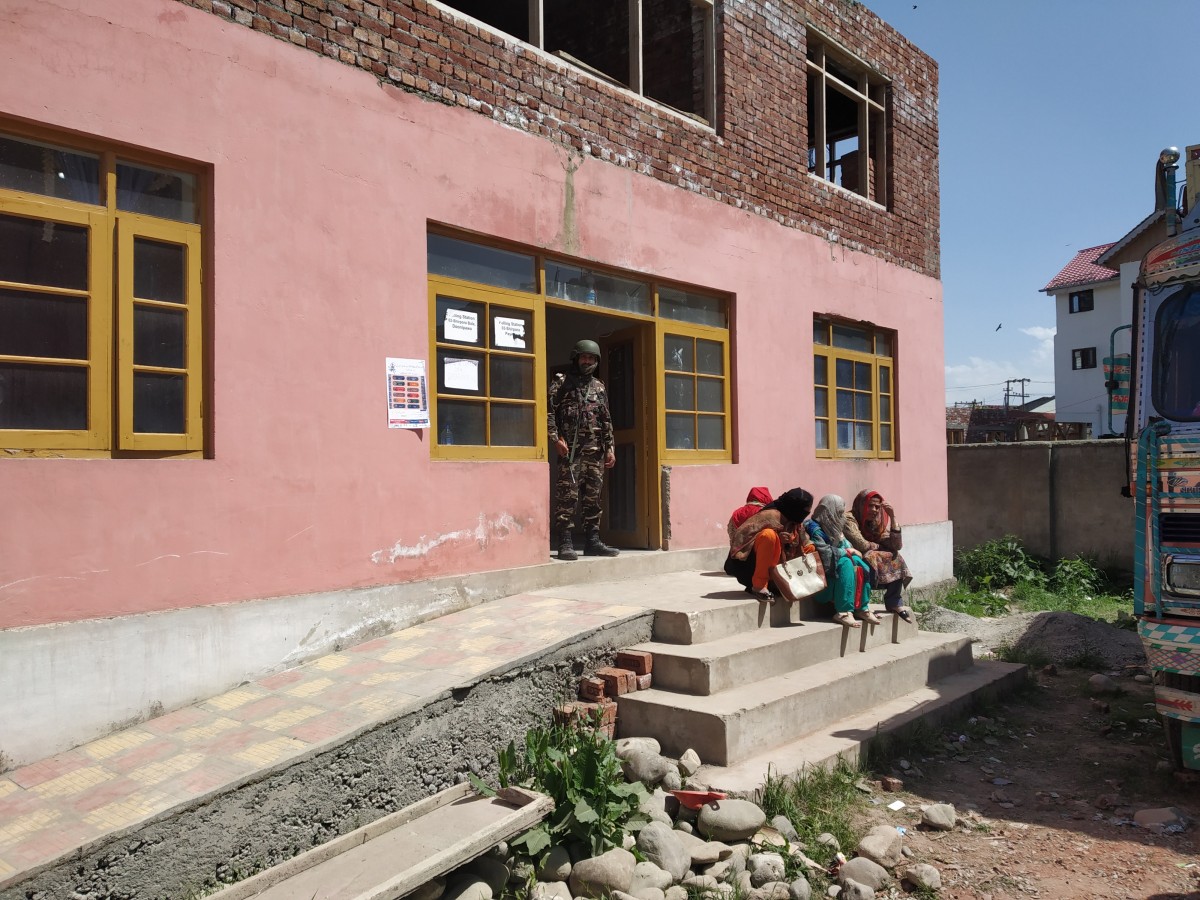 After the state police requested that the polling time in South Kashmir be changed, the EC on April 19 reduced the polling by two hours. Except for the few incidents of stone pelting, officials said, the polling was held smoothly.

The impact of the strike and calls for boycott given by separatist leaders was evident on the ground. Besides the roads and streets, most of the polling booths wore a deserted look throughout the day. People either stayed indoors or on shop fronts, discussing the low turnout. 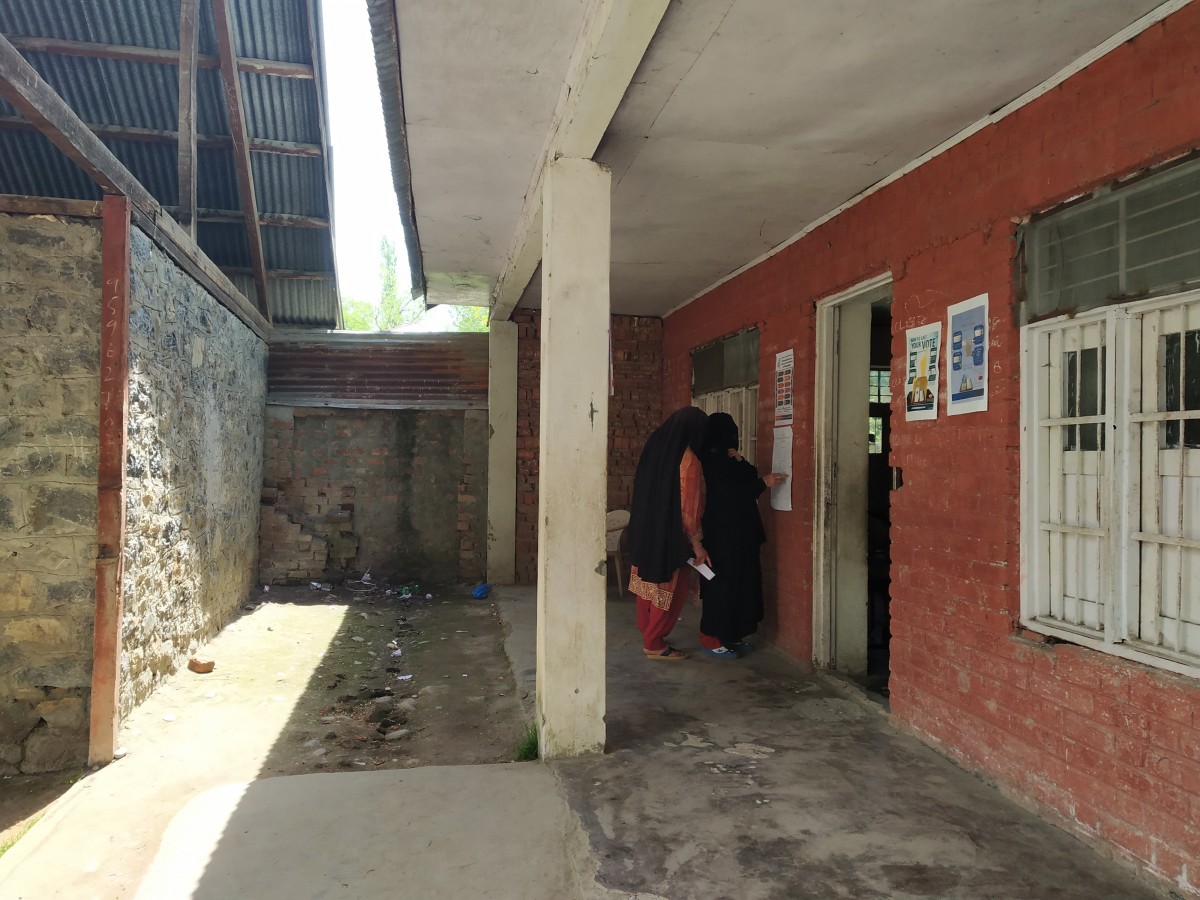 Raising their left-hand index finger, a group of villagers who were sitting just outside a polling booth in the Krangsoo village of Anantnag, told The Wire: “We didn’t cast our vote and will never do so in the future. They have killed our younger generation.”

In Krangsoo village, only eight voters had cast their vote until noon. The village, according to residents, was once a People’s Democratic Party bastion. Originally from Bihar, Neel Kamal, who was appointed as the micro-observer of Krangsoo polling booth, said, “In other states of India I have always seen pooling stations crowded with voters but in Kashmir, people don’t like to vote. Since morning, two to three voters have cast their vote. There is no election enthusiasm among the public here.” 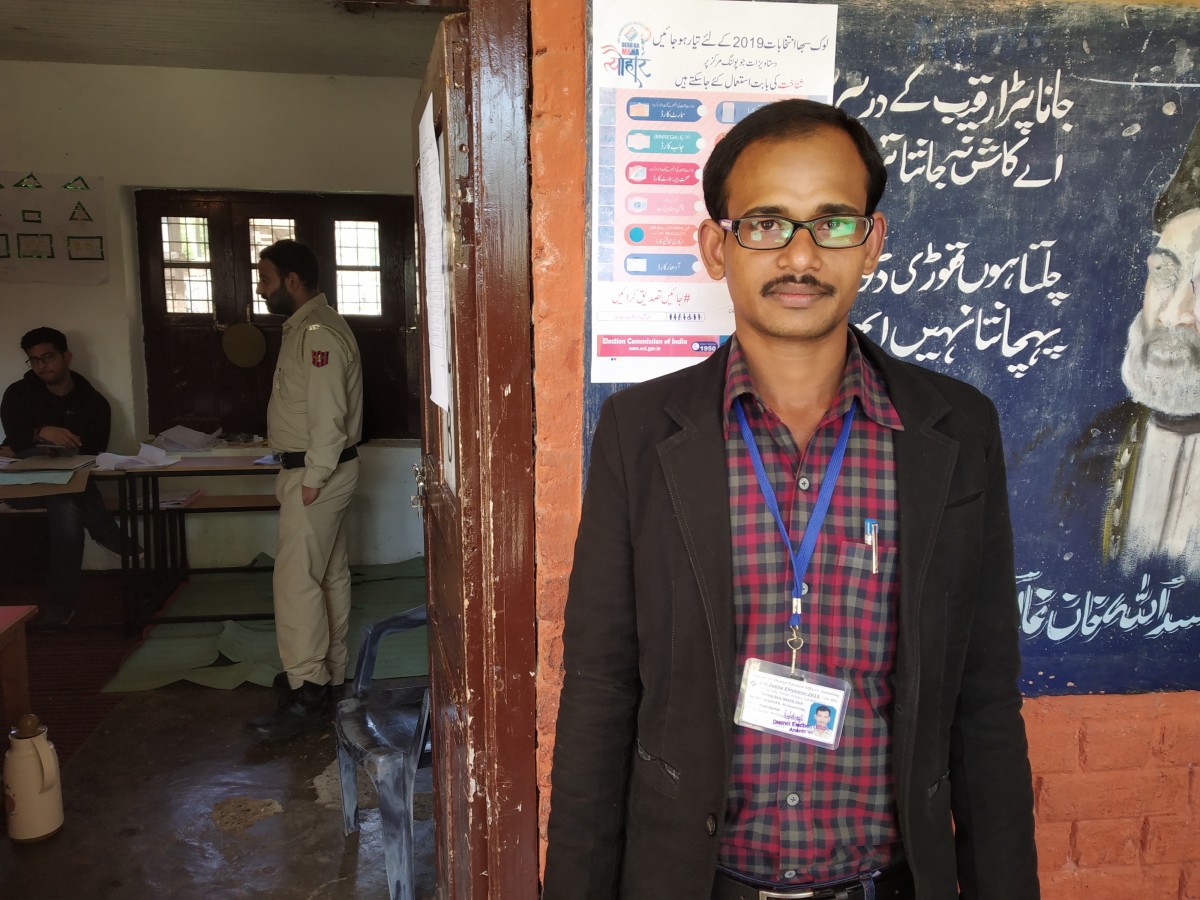 Neel Kamal, a non-Kashmiri from Bihar, was appointed as micro-observer at a polling station in Krangsoo Village. Credit: Aamir Ali Bhat

Wearing a burkha, a woman who was coming out from the polling station in Mattan village gave a cursory glance sideways and said, “Yes, I cast a vote.” The woman, wishing not to be named, further said, “Only I cast a vote from my family. Kashmir is going through a terrible period. I think our Valley needs political leaders who will raise the issues of people in the parliament.” 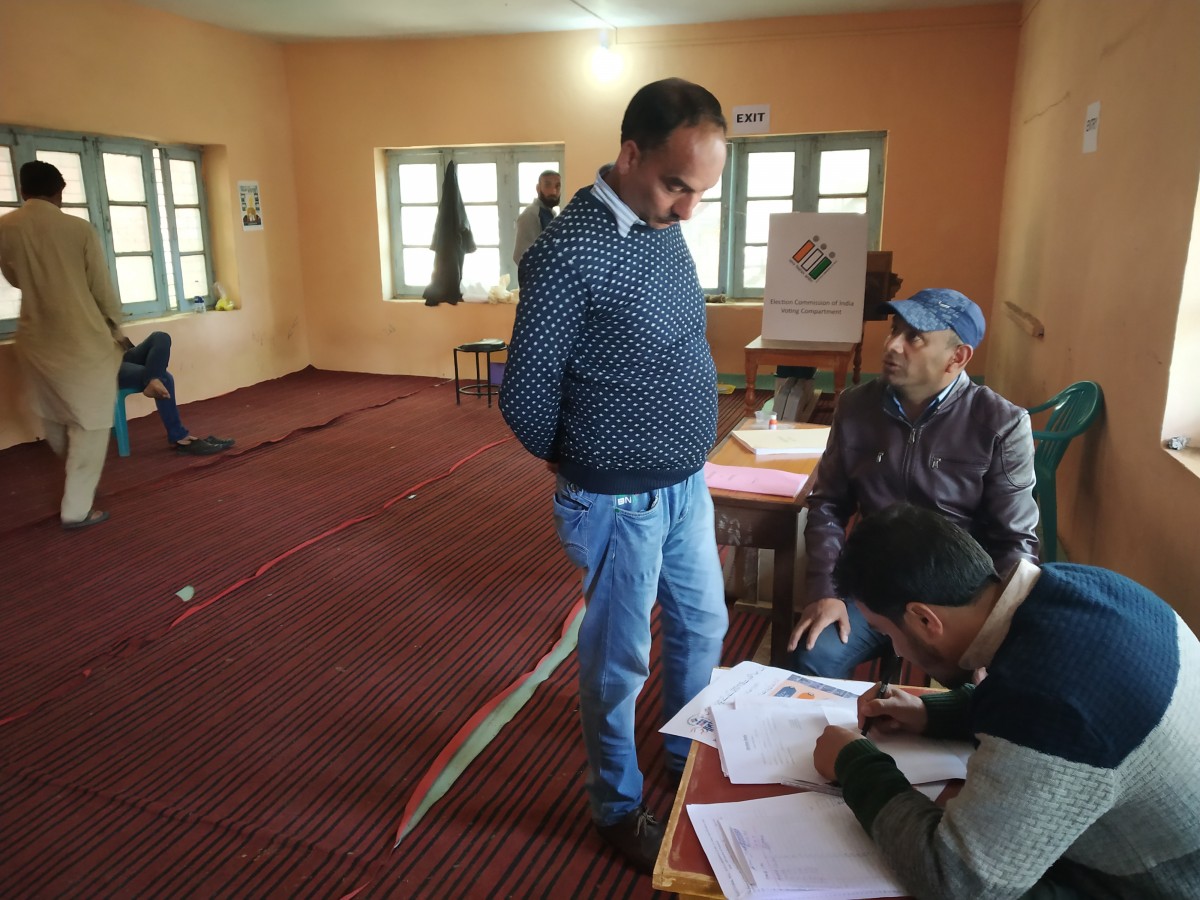 “There is a huge difference between elections held in other states and in Kashmir. People rarely come to vote in Kashmir,” said a security force official, Mukesh Bhati, guarding the Ashajipora polling station. “The government spent crores of rupees on the election process and only a few people have come to vote here. I think people in Kashmir feel threatened to cast a vote. We live in the world of technology, the government should think of some alternative in Kashmir. Otherwise, the election process is a failure in Kashmir.” 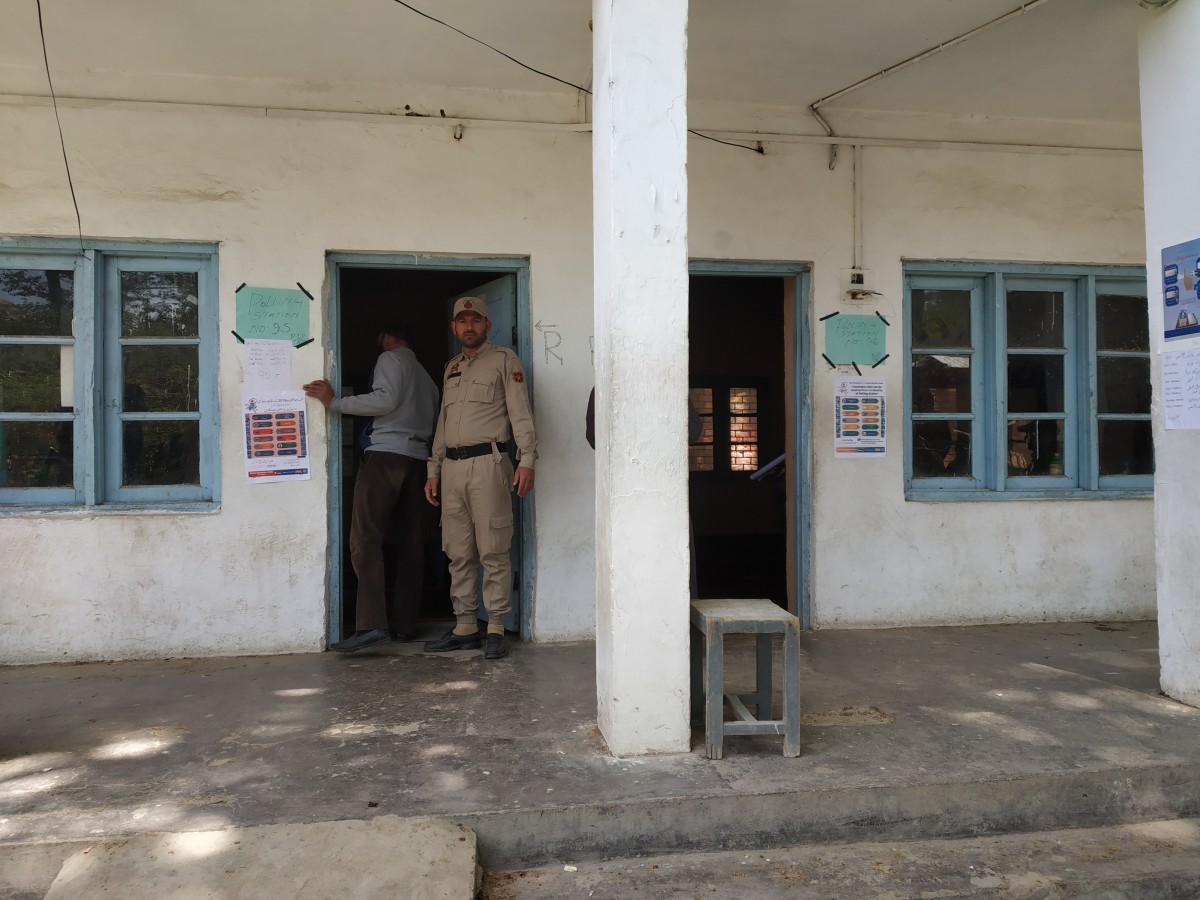 A police personnel posing for a photograph outside a deserted polling station. Credit: Aamir Ali Bhat 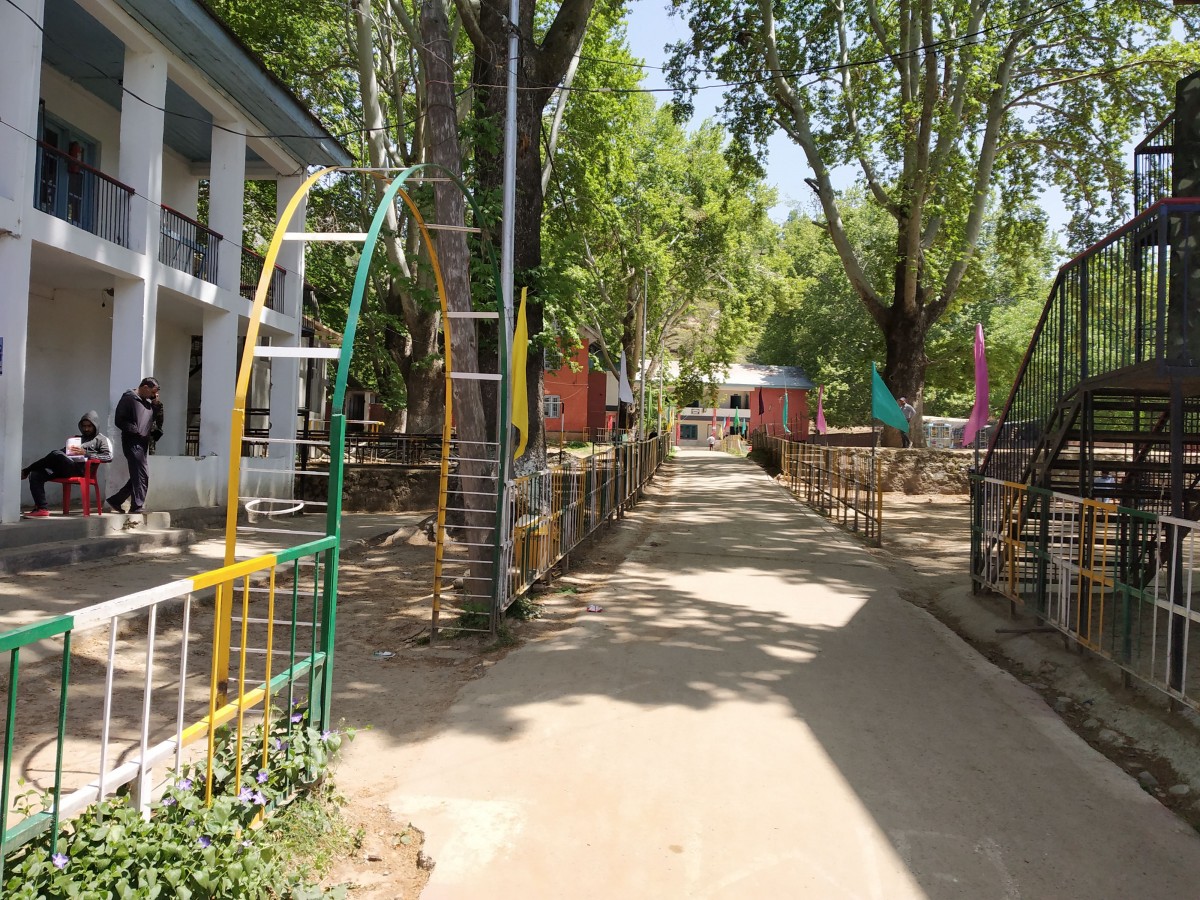 In Dehruna village, out of 793 voters, only three had voted till 3:30 pm. The villagers had blocked the roads leading to the polling station. “One of our villagers who had done an MPhil is an active militant. On the one side, they have pushed our educated youth to join the militancy and on another side, they expect people to participate in the elections. It is almost impossible,” said a villager, wishing not to be named. 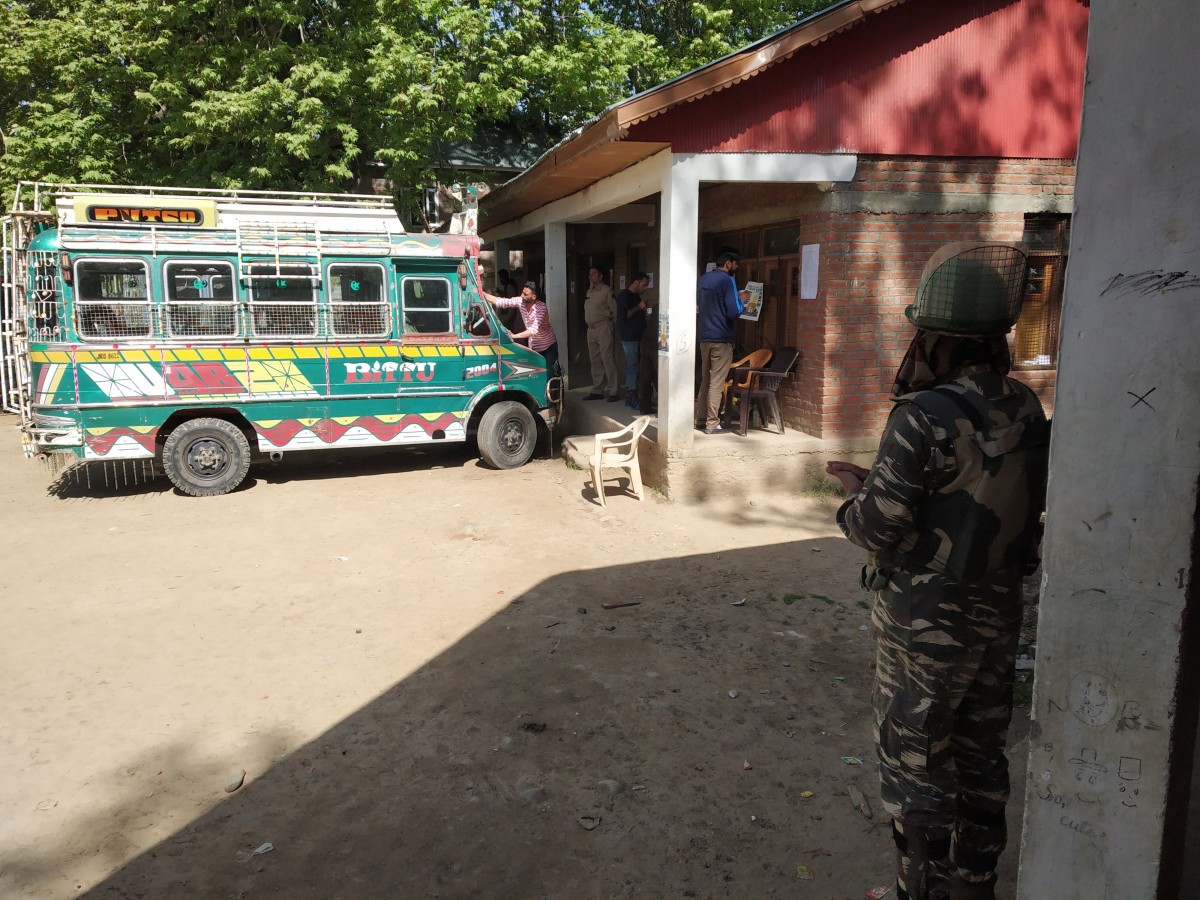 Polling staff calling it a day in Dehruna village. Out of 2,452 registered voters in this village, only three cast their vote. The village witnessed heavy stone pelting throughout the day. Credit: Aamir Ali Bhat

In June 2016, the Anantnag Lok Sabha seat was vacated after Mehbooba was appointed J&K chief minister. The EC had failed to conduct by-polls in Anantnag in 2017 after eight people were killed during the by-polls to the Srinagar parliamentary constituency, resulting in the seat remaining vacant for almost three years.

This time, among the 18 candidates who are in the poll fray are People’s Democratic Party president Mehbooba Mufti, state president of the Congress Ghulam Ahmed Mir, Justice (retired) Hasnain Masoodi of the National Conference, Sofi Yusuf of the Bharatiya Janata Party and Chowdhury Zafar Ali of the People’s Conference. 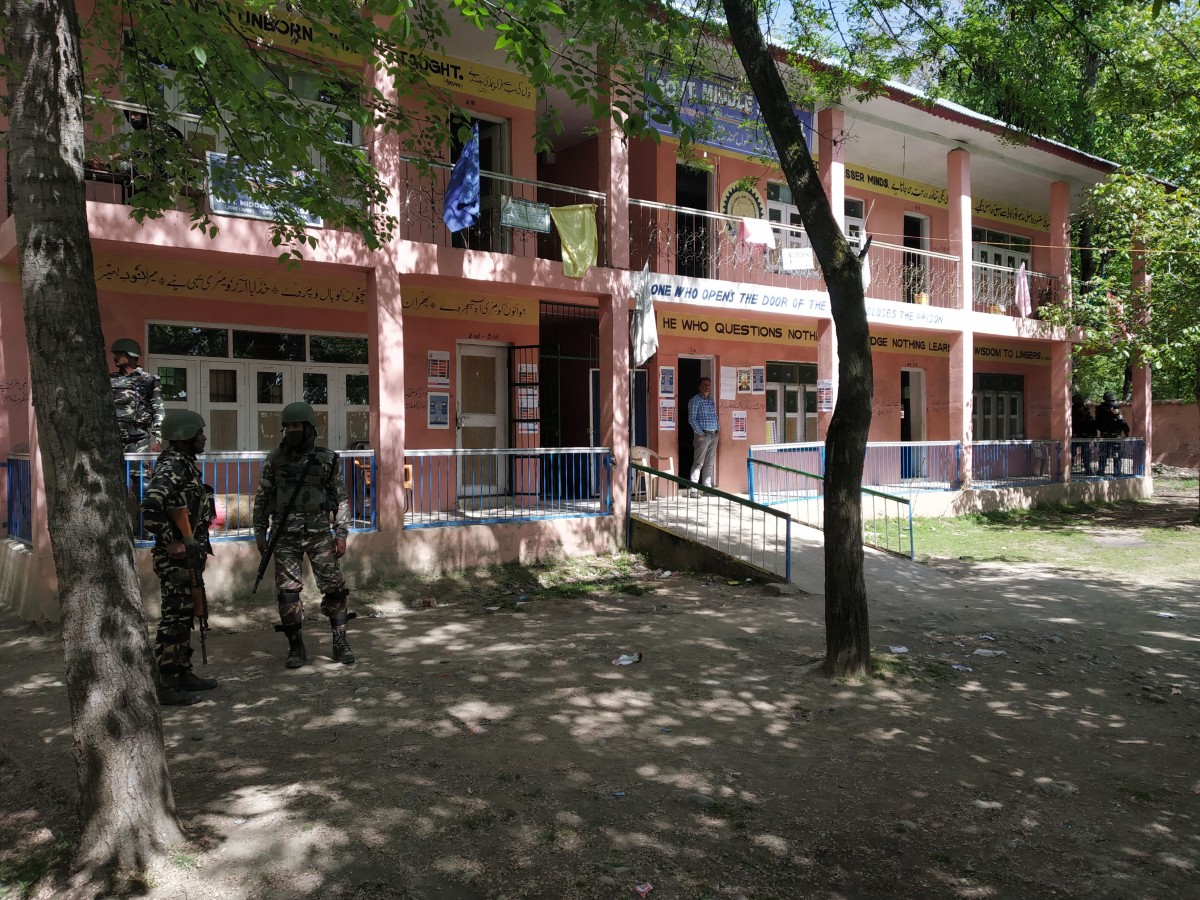 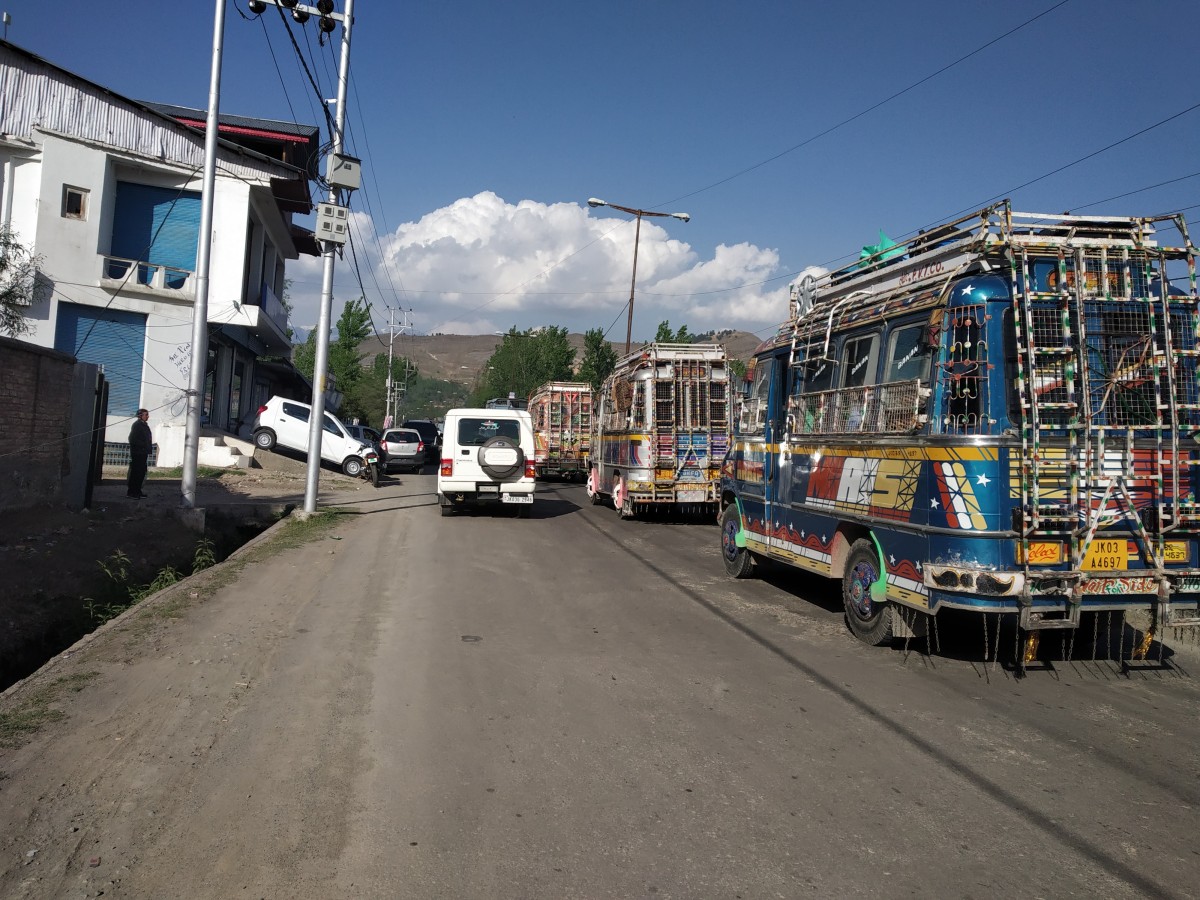 A day before polling, the security forces were ferried to their respective polling stations in passenger mini-buses. Credit: Aamir Ali Bhat

Kulgam will vote during the fourth phase, on April 29, while the elections in the districts most heavily impacted by militancy – Pulwama and Shopian – will be held in the fifth phase, on May 6.

While travelling back from the polling station, a bus carrying the polling staff, police and paramilitary personnel turned turtle in Zalangam village of Kokernag. One police constable identified as Hilal Ahmad Khan of Pulwama district died in the mishap and several others, including polling officers, were injured, officials said.