Union home minister Amit Shah’s recently concluded visit to Jammu and Kashmir, his first since its special status of under Article 370 was arbitrarily and unconstitutionally revoked in August 2019, turned out to be one more addition to a long list of disillusionments since nothing but rhetoric came out of it. The claims made by Shah that, since the downgrading of the state with special status into two union territories, there has been progress in J&K, are nothing but a hoax.

The home minister’s visit was preceded by a spree of arrests, restrictions, the undeclared snapping of internet services in several areas, the seizure of thousands of two-wheelers and the booking of youths under draconian laws like the Unlawful Activities (Prevention) Act (UAPA) and the Public Safety Act (PSA), all of which are indicative of the continuing volatility in the Valley. The several security reviews that Shah presided over during the visit were testimony to the challenges in Kashmir, belying his and other ministers’ assertions that “terrorism ended” after August 5, 2019.

Through a series of restricted public engagements and official functions in Jammu as well as in the Valley, the home minister’s single-minded focus was on reiterating the BJP’s political narrative on Kashmir. Through the visit, he also wanted to hoodwink the people of the country and blow the trumpet of so-called normalcy in Kashmir.

But his ‘normalcy narrative’ was punctured already due to the unfortunate civilian killings in the Valley and one of the longest anti-militancy operations in the Poonch district of Jammu region, where nine army soldiers, including two officers, have already lost their lives.

The reality is that the BJP government’s claims that the August, 2019 decision has reduced terror incidents and brought an atmosphere of peace and security to Kashmir are nothing but concocted and fabricated stories. In the two years and more, the silence of people, achieved by force, is being projected as acceptance of the government’s unconstitutional and arbitrary decisions. In reality, treating ‘silence-by-force’ as acceptance is the biggest mistake.

The home minister said that he had come to Kashmir to forge a friendship with the youth, however, at the same time, hundreds of these youths were being called to police stations to be detained and humiliated by law enforcing agencies. Moreover on Tuesday, two FIRs under the UAPA were registered against MBBS students from two medical colleges in Srinagar for allegedly celebrating Pakistan’s win over India in the ongoing T20 Cricket World Cup. Even female MBBS students have not been spared. Is this the model of ‘friendship’ which Amit Shah wants to build with Kashmir’s youth? 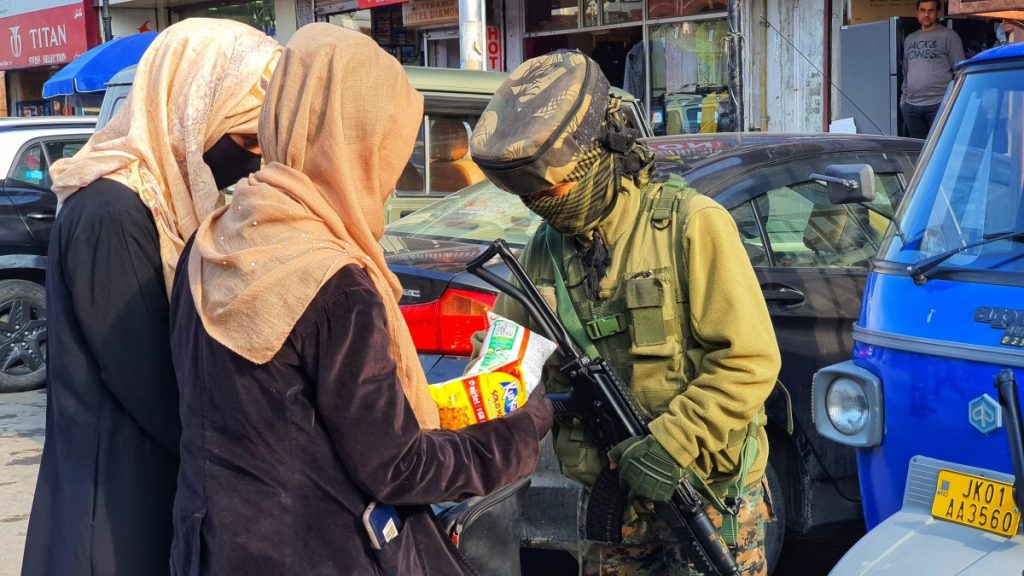 Security had been stepped up in Srinagar’s Lal Chowk ahead of the home minister’s visit. Photo: Faizan Meer.

The reality is that the disillusionment and denial of the constitutional and democratic rights of Kashmiris forces them to cheer for Pakistan. After the revocation of Kashmir’s special status, people in the erstwhile state have been silenced by force; on Sunday night, they give vent to their anger and frustration.

The BJP government has been boasting that its August 5, 2019 decision has ushered in a “Naya Kashmir” but the question that, naturally, follows is: what has this so-called “Naya Kashmir” given to the region? By all accounts, civil liberties have been curtailed in; the media has been gagged; dissenting voices are being silenced with force and government employees are being sacked arbitrarily. Can a new Kashmir be built by destroying the true Naya Kashmir; one which was achieved after a historic struggle and sacrifices against feudalism and autocratic rule?

The highest unemployment rate of 21.6% and staggering inflation rate of 7.39% in J&K belies the BJP’s claims of “growth and development” in the region post-2019.

J&K has been under the Union’s control since June, 2018 and since then, the BJP has been trying to systematically delegitimise the mainstream political parties in the region. The home minister fell back on the “three families looted and brought ruin to J&K” trope. Why does he forget that the BJP shared power in J&K and at the Centre with the same families, at one time or another? Why were those very same families – and the parties associated with them – considered so important that none other than the Prime Minister invited them to Delhi for talks in June?

The rhetoric of holding assembly elections in J&K after delimitation and the restoration of statehood was, once again, repeated by the home minister. The J&K Reorganisation Act, 2019, under which the delimitation process is being carried out, has already been challenged in the Supreme Court. the broad perception is that the exercise is being carried out to further disempower the people of Kashmir. The question is: what is stopping the Union government from restoring the statehood of J&K, announcements for which have been made for more than two years, within and outside Parliament?

The reality is that the prevailing situation in Kashmir has been manufactured by the BJP-RSS combine by design. Their only intention behind the abolition of J&K’s constitution was to change the demography of this historic state.

The J&K administration’s recent order to authorise district collectors to alienate agricultural land to a non-agriculturist in order to expand primary activity to a larger, commercial scale, is part of this ploy.

Last year, too, it enacted land laws that opened the region to all comers, liberalised domicile laws, conducted demolition drives in forests, made structural changes in the administration which reduced the centrality of Kashmiris, raised new property taxes, opened state resources to outsiders and reduced the retirement age as well as the civil service quota for local Indian Administrative Services (IAS) and Indian Police Service (IPS) officers in the union territory (UT) from 50% to 33%.

An attempt is being made to create a wedge between regions and communities for partisan interests.

The home minister said that 30,000 people have been elected as the representatives of the people of Kashmir. But the reality is that J&K is suffering because of the denial of democracy which has been a consistent policy of the Indian state, being followed aggressively by the current regime in Delhi.

Since 2014, every attempt has been made to dismantle any remnants of democracy in Kashmir. Shah is still claiming the conducting of elections for local bodies and panchayats as a “victory of democracy.” The fact is that these elected representatives are not being facilitated to function properly and are not being empowered to serve the people either.

It is time that the secular democratic forces in the country come forward and unitedly raise their voice in defence of the rights of the people and their legitimate aspirations. The disillusionment and hopelessness created among the people of J&K by the nefarious designs of the BJP government should not get further deepened. It can only provide opportunities for extremism to grow.

M.Y. Tarigami is a CPI(M) central committee member and former MLA from the Kulgam constituency.