Youth Sought Oxygen for Grandfather via Tweet, UP Police File Criminal Case Against Him

The Amethi Police's action comes two days after UP CM Adityanath asked officials to take action against “anti-social elements” who spread “rumours” and propaganda on social media and try to “spoil the atmosphere”. 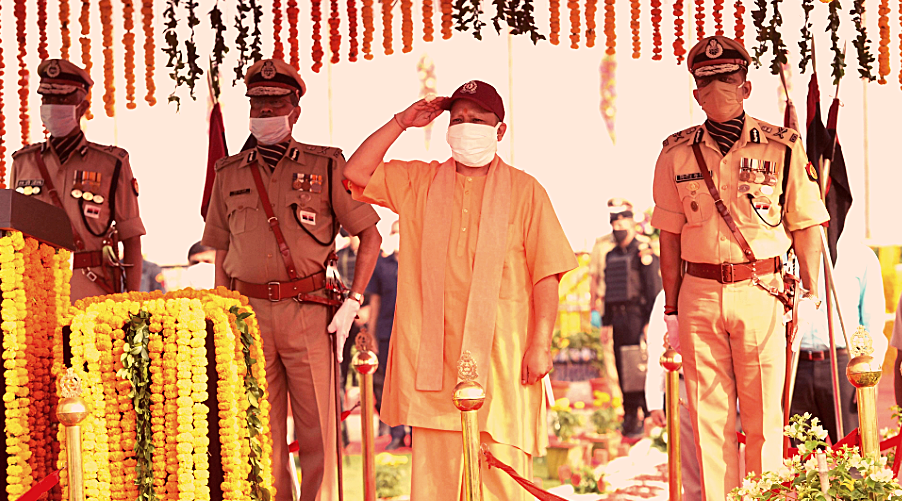 New Delhi: The Amethi Police tweeted on Tuesday evening that they have registered a criminal case against a young man who took to Twitter to make an appeal for an oxygen cylinder.

The charges include circulating a rumour “with intent to cause… fear or alarm… whereby any person may be induced to commit an offence against the State or against the public tranquility” and engaging in acts likely to spread infectious diseases.

On Monday evening, Shashank Yadav tagged the actor Sonu Sood in his tweet but otherwise provided no further information. He did not mention Covid-19 or any other ailment. 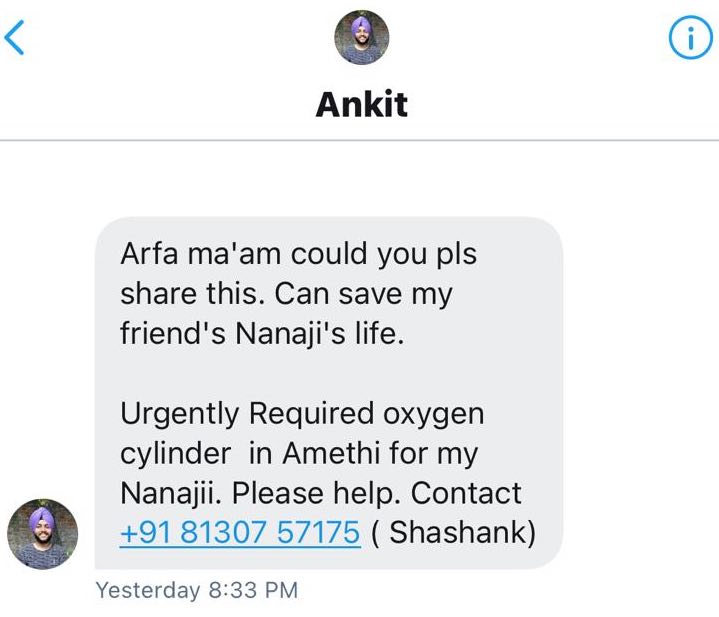 One of his friends, Ankit, retweeted Yadav’s appeal at 8:33 pm and also sent a direct message on Twitter to The Wire‘s senior editor, Arfa Khanum Sherwani, seeking her help.

Sherwani, who like other journalists and influencers on social media, has been amplifying appeals for medical help in the wake of the growing Covid crisis across India, tweeted this appeal when she saw this message, which was shortly after midnight.

In subsequent tweets, she tagged Union minister Smriti Z. Irani, who is the MP from Amethi, as well as a prominent Lucknow-based editor and a Samajwadi politician, both of whom have been involved in helping patients.

Irani responded promptly, despite the lateness of the hour, to say she had tried to reach Shashank but had received no response.

Called Shashank thrice .. no response on the number shared by you in your tweet. Have alerted office of @DmAmethi & @amethipolice to find and help the person in need. https://t.co/4D3Nfe2Nue

Meanwhile, Ankit, who first alerted Sherwani to the need for oxygen, had messaged her at 00:44 am to say his friend’s grandfather had passed away.

When she saw Irani’s tweet, therefor, Sherwani immediately informed her that the grandfather had died. To which the minister replied, “Kept calling his number , we all did including CMO, @amethipolice.. I just wish he had picked up his phone. My condolences.”

Ankit – who had requested Sherwani to tweet the call in the first place – thanked Irani for reaching out to the family.

Thank you for reaching out to us Smriti ma’am. Appreciate it. This is to inform you, with heavy heart, that Shashank’s Nanaji is no more. For now, we can only pray for the departed soul. Thank you. Thanks to @khanumarfa ma’am also.

This is where the matter ordinarily would have ended. In the crisis that has unfolded as COVID-19 numbers rose across the country in a second wave, several thousand people have been active online attempting to help secure essential medical supplies for others by amplifying their messages so that more people see them and help comes quicker. Many urgent calls for assistance are quickly resolved while others, tragically, fail to stave off death.

But because Amethi is a high profile constituency – Irani beat Rahul Gandhi in the 2014 elections and is now a minister – someone in government decided this ‘bad publicity’ for the district and the state should not go unpunished.

A little after noon on April 27, the Amethi District Magistrate tweeted the Amethi Chief Medical Officer’s report in reply to Sherwani’s post.

The report said that the man in question was not suffering from COVID-19 and had been undergoing treatment at a private hospital in Durgapur.

Though neither Shashank Yadav nor Sherwani had said the oxygen was needed for a COVID patient, the police too focused on this aspect to suggest the two had broken the law in some way.

On  Tuesday evening, the Amethi Police tweeted a reply to Yadav and to Sherwani’s original messages in which it said the grandfather had not been suffering from Covid did not have a prescription for oxygen and had died of a ‘heart attack’. “Spreading these kinds of rumours is not just condemnable but a criminal offence.

Although oxygen levels are known to drop in cases of patients who test COVID-19 positive, this disease is not the only one that causes such a drop. It is but natural that the crippling shortage of medical oxygen – which has led to international help pouring in – affects patients in need of oxygen for other ailments as well.

Sherwani responded to this warning from the police with a screenshot of the message she had received seeking her help, noting in a subsequent tweet that she did not know 99% of the people whose SOS calls she had been amplifying at this time.

The police replied to her tweet to say they had  registered a case under sections 188, 269 and 505 (1)(b) of the Indian Penal Code, along with Section 3 of the Epidemic Act and Section 54 of the Disaster Management Act.

Soon after, however, the police rushed to clarify that the case they had booked was against Shashank Yadav, whose original appeal for oxygen had set off the calls for help which eventually reached Smriti Irani. This clarification was in reply to a tweet by The Wire‘s founding editor condemning what he said was an attempt to intimidate Sherwani, other good samaritans and the families of patients desperate for medical help.

The charges against Yadav are serious and could result in jail time if the police pursue the case and manage to get a conviction. The aim could also be to send a signal to families like Yadav’s across Uttar Pradesh that any attempt to speak in public about difficulties in getting treatment could lead to a criminal case against them. With Uttar Pradesh set to be the state with the highest number of Covid cases and its health system floundering, this is clearly not an empty threat.

The Amethi Police’s action comes two days after Uttar Pradesh Chief Minister Adityanath, in a virtual interaction with select journalists, asked officials to take action under the National Security Act and the Gangsters Act against “anti-social elements” who spread “rumours” and propaganda on social media and try to “spoil the atmosphere”. In the same meeting, Adityanath asserted that there was no shortage of oxygen in any private or public COVID-19 hospital in Uttar Pradesh.

A section of Twitter users who have been amplifying SOS calls for supplies, have alleged that the Delhi Police has cracked down on them and sought to silence them for their work. The police, however, have denied this.

Twitter, meanwhile, has withheld from public view around 50 tweets critical of the manner in which the Narendra Modi government has handled the COVID-19 pandemic, at the Centre’s request.