According to the Railways, around 200 trains have been affected across the country and 35 have been cancelled. 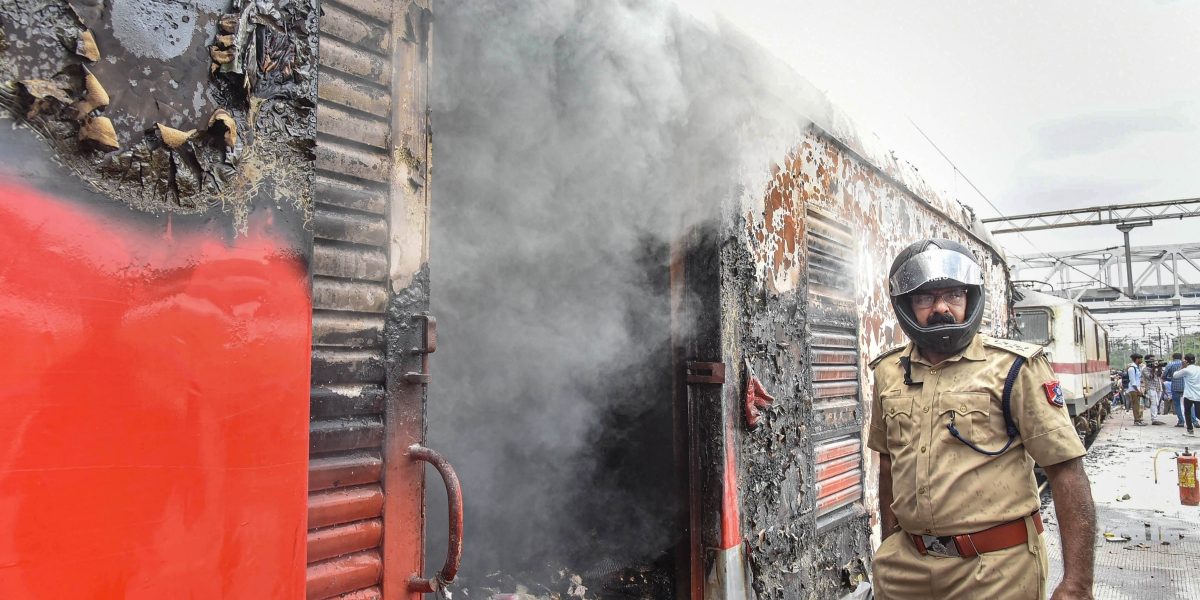 New Delhi: Protests against the Agnipath military recruitment scheme continued in several parts of the country for the third consecutive day on Friday, with trains being set on fire in Uttar Pradesh, Bihar and Telangana.

Protests have not abated despite the government’s announcement on Thursday that the age of recruitment under the new scheme will be raised to 23 for this year. The ambitious new scheme, announced on Tuesday, will overhaul the way people are recruited to the armed forces: personnel below officer rank (PBOR) into the Indian armed forces will be recruited for four years, after which they will be discharged.

At the Secunderabad railway station, police opened fire after lathi-charge and tear gas shells failed to bring the protests under control, a senior police official told Hindustan Times. One protester was killed and eight injured critically.

Two trains were set ablaze by protesters at the station in Hyderabad, with news agency ANI reporting that stalls were also vandalised. All ten platforms of the station have witnessed some amount of damage.

The South Central Railways estimates that property worth at least Rs 20 crore has been damaged, the newspaper said.

#WATCH | Telangana: Stalls vandalised, train set ablaze and its windows broken at Secunderabad railway station by agitators who are protesting against #AgnipathRecruitmentScheme pic.twitter.com/zFNgJ2MEgD

The worst-hit East Central Railways – which covers Bihar, Jharkhand and parts of Uttar Pradesh, the states which have witnessed widespread protests – has also decided to “monitor” the operations of eight trains due to the agitations.

The officials said they are keeping an eye on the movement of these trains and will take decisions on their operation as the situation evolves.

Intense protests in UP, Bihar

In Uttar Pradesh’s Ballia, agitators raised slogans of ‘Bharat Mata ki Jai’ and ‘Agnipath Vapas Lo’ on Friday and set an empty train on fire and vandalised a few others, prompting the police to lathi-charge them.

According to news agency PTI, the protesters gathered at the Veeri Lork Stadium and then marched to the Ballia railway station.

A video of the youths raising the slogans and vandalising the Ballia-Varanasi Memu and Ballia-Shahganj trains has gone viral.

They also allegedly pelted stones near the railway godown and targeted private shops at the railway station platform.

Buses outside were targeted too, sources said.

District magistrate Saumya Agarwal said, “Considering the possibility of youths protesting, police was deployed from the morning itself. Some unruly youths came and tried to pelt stones, but the administration did not allow them to succeed. One portion of Ballia railway station was vandalised. Action is being taken against the unruly elements.”

In Bihar, trains have been set ablaze at multiple locations. According to the Indian Express, six compartments of a train were set on fire at Moihuddin Nagar in Samastipur, while two coaches of another train were also set ablaze at Lakhisarai station.

At the Hajipur railway station too, protesters are agitating.

The coaches were emptied by the protesters before they were set ablaze, the newspaper said. Movement of trains on the Patna-Howrah and Patna-Bhagalpur routes.

ANI reported that the residence of Bihar deputy chief minister Renu Devi in Bettiah was attacked by agitators. The house suffered “a lot of damage” according to her son.

#WATCH | Bihar: The residence of Deputy CM Renu Devi, in Bettiah, attacked by agitators during their protest against #AgnipathScheme

Her son tells ANI, “Our residence in Bettiah was attacked. We suffered a lot of damage. She (Renu Devi) is in Patna.” pic.twitter.com/Ow5vhQI5NQ

A toll plaza in Bihar’s Sasaram was also burnt down by protesters, according to reports.

The Gurugram district administration has imposed Section 144 of the Code of Criminal Procedure as a precautionary measure even though no fresh protest was reported here on Friday against the Centre’s Agnipath scheme to recruit soldiers.

Deputy commissioner Nishant Yadav said the order was issued as protests were likely to spread to the second day here and that the administration anticipated angry crowds at railway stations, bus stands, markets, national highways and power grids among other places in the district.

“This may have created obstruction, disturbance or interference in the maintenance of law and order,” he said.

In other parts of Haryana, for the second day on Friday aspirants burned tyres and squatted on rail tracks in Narwana, blocking the Jind-Bathinda track.

In Rohtak, the protesting youth burnt tyres, while over 40 youths were rounded up in Ballabgarh for resorting to stone pelting at vehicles on NH 19.

The protestors, who were mainly college students, shouted slogans against the Agnipath scheme and resorted to stone pelting near Anaj Mandi, police said, adding the police lathi-charged them.

A company of the Indian Reserve Battalion has been requisitioned from Rewari to ensure law and order, they said.

In Madhya Pradesh’s Indore, hundreds of protesters gathered on tracks near a railway station in the city and hurled stones on Friday morning, forcing the authorities to either stop or cancel some trains and also prompting the police to lob teargas shells to control the situation.

Two policemen suffered minor injuries in the incident, they said, adding that around 15 protesters were arrested.

When the protesters indulged in stone-pelting, police fired teargas shells and also cane-charged to disperse them and bring the situation under control, he said.

“Two policemen sustained minor injuries during the incident but no information of train passengers getting injured in the stone-pelting has been received so far,” he said.

Around 15 protesters were arrested and legal action against them was initiated, Mishra said.

On Thursday, the defence ministry said that it was taking cognizance of the fact that since military recruitment could not happen over the past two years, “the government has decided that a one-time waiver shall be granted for the proposed recruitment cycle for 2022”, raising upper-age limit to 23 years.

Bihar bore the brunt of the violence on Thursday, with trains set ablaze, window panes of buses smashed and passersby, including a ruling BJP MLA, pelted with stones.

Police fired teargas shells and used baton to break up protests by angry youngsters who blocked railway tracks, threw burning tyres on roads, and performed push-ups and other drills on the streets against the new recruitment policy.

In Nawada, the vehicle of BJP MLA Aruna Devi, who was on her way to a court, was attacked by the agitators, leaving five persons, including the legislator, injured.

Railway property was vandalised and protesters set fire to stationary carriages at Bhabhua and Chhapra stations and smashed window panes of coaches at many places.

“So far we have arrested 125 people in connection with the violence. Two dozen FIRs have been registered. At least 16 police personnel have been injured across the state in clashes with the protesters,” Sanjay Singh, Additional Director General of Police (Law and Order), told PTI.

Five government vehicles were set on fire by the protesters while stones were thrown at the residence of the Palwal deputy commissioner.

Violent demonstrations were held in Gwalior and Indore in Madhya Pradesh and Bulandshahr and Ballia districts of Uttar Pradesh.

Protests were also held in the Jodhpur, Sikar, Jaipur, Nagaur, Ajmer and Jhunjhunu districts of Rajasthan but no violence was reported.