Prime Minister Narendra Modi seemed throw his weight behind the scheme, saying several decisions may "look unfair" at present but will "help in building the nation". 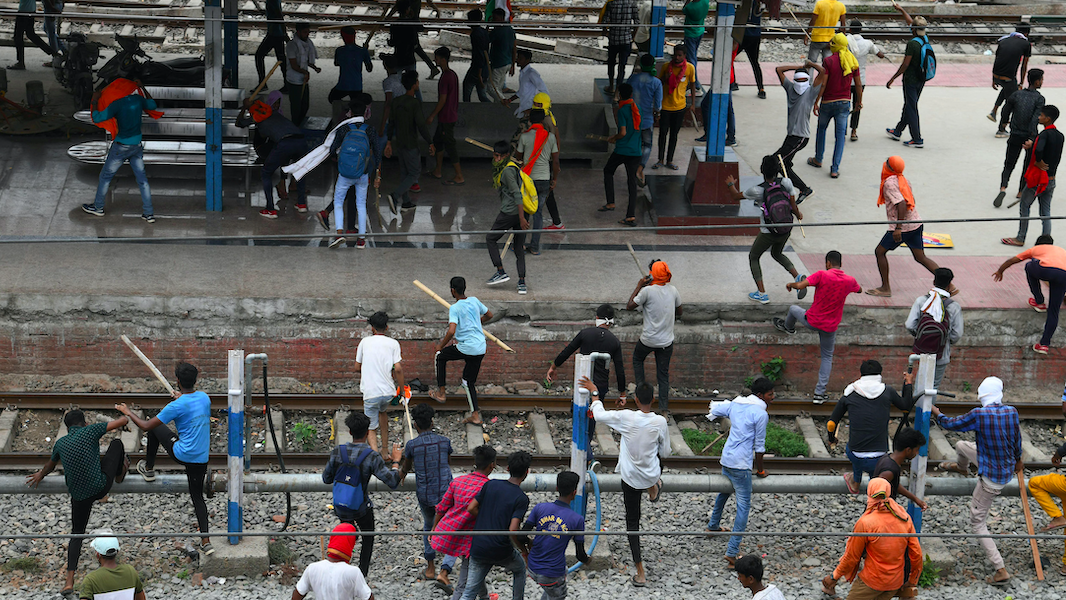 Protestors carrying sticks run at a railway station during a protest against Agnipath scheme for recruiting personnel for armed forces, in Patna, in Bihar, India, June 17, 2022. Photo: Reuters

New Delhi: As a countrywide strike was observed against the Agnipath military recruitment scheme that will leave 75% of recruited soldiers without a clear path of employment four years after having been hired, the Army issued a notification in which it said that all aspirants under the scheme will be required to register online on the force’s recruitment website.

The notification also detailed that online registrations will be opened in July.

Prime Minister Narendra Modi, meanwhile, seemed to throw his weight behind the scheme, saying, “Several decisions look unfair at present. In time, those decisions will help in building the nation.” He was speaking at an event in Bengaluru but did not mention the Agnipath scheme by name.

Before the nationwide strike began, the government banned 35 WhatsApp groups that were allegedly spreading fake news. The government has not released information about these groups or if any action has been initiated against their administrators.

In parts of the country, police and security forces have been posted in large numbers ahead of the Bharat Bandh call given by various organisations. On June 17, the organisations had given the government a 72-hour ultimatum, promising a countrywide strike if the scheme is not rolled back.

Among those who had issued the ultimatum, according to Economic Times, are Raju Yadav, the convener of Army Recruitment personnel Morcha; Manoj Manjil, Left party MLA from the Agiyaon Assembly constituency and national president of INAUS, Sandeep Saurav, MLA of Paliganj and secretary of AISA Bihar unit; Ajit Kushwaha, MLA of Dumraon; Aftab Alam, Vikas Yadav and many others related to AISA (All India Students Association) and INAUS have given the ultimatum to the Central government to withdraw the Agnipath scheme.

As tensions were high across the country, Prime Minister Narendra Modi, while addressing a public event in Bengaluru, said, “Several decisions look unfair at present. In time, those decisions will help in building the nation.” He, however, made no explicit mention of the Agnipath scheme.

In Noida, Gautam Buddh Nagar has imposed section 144 of the Criminal Procedure Code. So far, 225 people have been booked and 15 arrested in connection with the violent protest at the Jewar toll plaza on the Yamuna Expressway in Greater Noida on Friday.

Trains were cancelled at Gorakhpur in Uttar Pradesh, the news agency ANI has reported.

Have been waiting for 3-4 hours. When we checked train status last night,it didn't say cancellation, but on reaching here we found out about it, they say pic.twitter.com/bAL6DPkH0D

The Delhi-Gurugram Expressway has seen traffic disruptions, NDTV has reported, due to checks being conducted by security forces.

In Haryana, armed forces aspirants blocked roads and demanded that the scheme be rolled back.

In Fatehabad, a group of youth blocked the Lal Batti Chowk, while several others staged a protest on roads in Rohtak district.

There was a heavy deployment of police at railway stations, including those in Ambala, Rewari and Sonipat in Haryana and Ludhiana, Jalandhar and Amritsar in Punjab to prevent any untoward incident.

In a communication to all police commissioners and senior superintendents of police in the state on Sunday, Punjab’s Additional Director General of Police (Law and Order) said offices and installations of the central government departments needed stronger security while protection around other vital installations needed to be enhanced.

Kerala police has said its entire force will be on duty to arrest anyone engaging in violence or destruction of public property during the Bharat Bandh.

State police chief (SPC) Anil Kant issued guidelines to the personnel to prevent violence against the public as well as forced closure of businesses, a release issued by the State Police Media Centre said.

On Monday, Union minister and former army chief, General V.K. Singh had stern words for those demonstrating against the new recruitment scheme.

Asking why protestors were coming out to destroy property, Singh asked, “…has anyone told you that you will be taken in the Army?”

Further, he said, “Army is not a mode of employment. It’s not a shop or company. Whoever goes into the Army, do so voluntarily,” according to news agency ANI.

Protests against the scheme across the country have led to mass destruction of trains, vehicles and other public and private property.

Ruling out the rollback of the controversial scheme despite the widespread protests, the three services of the military on Sunday, June 19, announced that applicants for the new recruitment scheme will have to pledge that they did not participate in any arson or agitation.